It Came From the Back Room #51 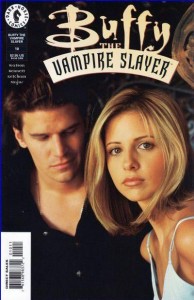 Standard recap: I’m slowly going through AABC’s one-million-plus back-issue room, restocking the boxes on the sales floor and pulling stuff to sell as discount/overstock/special items (these are featured at the discount racks at the west end of the store for a couple of weeks after each post, and then go to the discount racks on the east end of the store for a few weeks, and then disappear into our warehouses, so get them while you can). I’m going through the alphabet backwards (don’t ask), and at my speed (even now in the summer, when I’m not teaching), this amounts to a three-year project.  This week, we’re starting the letter “B,” and commencing with the smaller-publisher titles; that means a lot of capsule reviews of a number of titles that are available for discount right now: 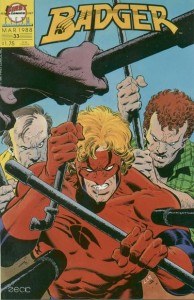 This is Mike Baron’s “other” ’80s creation (Nexus being the first), and, while it’s an acquired taste, it’s worth a look. The Badger is Norbert Sykes, a Wisconsin resident (hence the “costumed” name) who has multiple-personality disorder and a knack for martial arts; as the Badger, he’ll beat up just about anyone, for crimes ranging from littering to actual robbery, murder, etc. He makes his living as an aide/bodyguard to Ham, an ancient, amoral weather wizard/druid now living in Madison and using his powers to do things like manipulate the stock market and make himself rich. While this title never had the benefit of a top artist/collaborator (like Steve Rude provides for Nexus), and so often featured pedestrian art, the stories have enough gonzo social commentary/weirdness/action to be entertaining. Bonus points for Baron having enough knowledge of the various martial arts and weapons to make the fights realistic (at least, considering the various demons, monsters and assorted occult figures who parade through the pages, and get their butts kicked by Norbert). 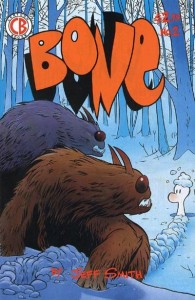 This is Jeff Smith’s all-ages masterpiece, certainly the most successful comic series of the ’90s in terms of total sales, thanks to Smith’s abilities to tell a rollicking, dramatic and funny story (and to his hookup with Scholastic Books, who introduced millions of grade-school kids to the title in its collected editions). It’s a sprawling fantasy-world construction that manages to be just about perfect in story, characterization and art. If you’ve never read it, grab a few of the individual issues to get the flavor, and then dig into the trade collections — it’s a story that rewards the reader who starts at the beginning. If you read it years ago and haven’t gone back lately, pick up a random issue or two and rediscover Smith’s sure-handed magic.

Tony Wong, a comics publisher in the Orient, was in the ’80s sometimes called “Hong Kong’s Stan Lee” (both for the range and popularity of the comics he published there, and for his knack at self-promotion), and in 1988 his Jademan Comics translated and reprinted a number of his series for the American market; these are two of them. They’re like obscure, imported  king-fu movies brought to life, and offered the first taste of non-Japanese Asian comics fare to many American readers — and if the gonzo martial-arts madness reminds you of The Badger… well, Baron was a fan, and wrote the English-language translations for a number of these. 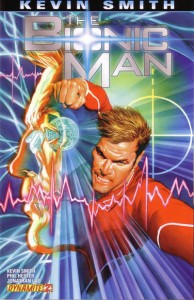 Kevin Smith’s movie script for this ’60s-revival project never got off the ground, so Dynamite turned it into a comic; Smith fans should check it out. I didn’t find it particularly readable, myself — and I’m about a 50% Smith reader — but your mileage may vary. 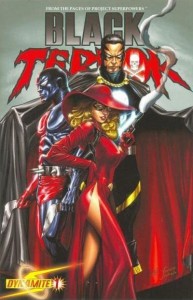 Ditto for this, a spinoff book from Alex Ross’s Project: Superpowers comic; it’s an “Alex Ross” book in the sense that he drew one of the multiple covers for each book and is listed as “co-plotter” and “art director,” which a cynic would guess means he discussed each issue with the real writer and artist for an hour or so over lunch. As with Bionic Man, I found it hard to actually get through any of these, but, you know, here they are…. 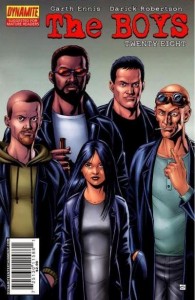 This is Garth Ennis’s long-term tale from the last six years, his longest sustained work since Preacher (unless you count all of his Punisher run as one story), and it has some similarities to that Vertigo series: a romance at its core, mixed with a bromance, a stable of bizarre/colorful characters, and a knack for providing shocking, over-the-top and randomly scatological moments of violence and humor. Unlike Preacher, it also mixes in a lot of satire of various superhero books — its early characterization of a Batman avatar as  battling sexual urges for anything that moved, including his young partner, is probably what got it booted from the DC Wildstorm imprint after six issues (although it quickly got picked up by Dynamite, and has been with that publisher ever since). There was also the X-Men/Animal House mashup that imagined the Professor X stand-in as a pederast… but, beyond all the dark taking-the-piss of comic-book conventions, there’s also a solid, carefully-constructed story, with two characters that readers care about, and a plot that refuses to be predictable or take any easy ways out. The book’s only got a couple of issues left; if it can stick the landing in the conclusion, it’ll have been one of the better comics of the last decade. If…. 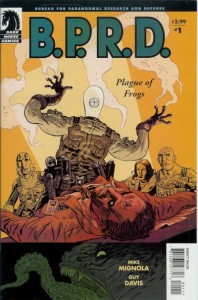 This is Mike Mignola’s companion to Hellboy (that character used to work for the title organization, whose acronym stands for “Bureau for Paranormal Research and Defense”), and, while it’s never been an ongoing series (it’s a collection of mini-series), it’s been around for ten years now, and published close to 100 issues. The earlier books benefit greatly from the Guy Davis art, because of his knack for shadowy horror, but practically every artist who’s tackled the title gets to draw various haunted mansions, creepy characters, demons and other assorted occult creatures and monsters, and seems to have a lot of fun doing it. There’s also an over-story connecting the various mini-series (and the Hellboy books, too, come to that), which involves the Earth facing increasingly-apocalyptic changes and Lovecraftian-level menaces; as with all of the Mignolaverse books, the careful construction and appealingly-grotesque art make these worth sampling. 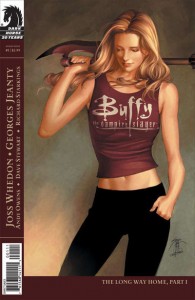 There are two volumes of this series (based on the cult TV show, if that wasn’t obvious): the first came out while the show was being broadcast, and lasted for 60-some issues; it’s got decent-enough art and story, especially for fans, although the photo covers are probably the biggest attraction. The second volume, though, appeared after the show’s cancellation, and involved Buffy creator and executive producer Joss Whedon treating the comic as the show’s eighth season, continuing the story and providing episodes just as they would have appeared on-screen (and even writing some of them himself). That’s a cool idea, one that’s been picked up by a few other series too (including  Angel: After the Fall, which picked up where the fifth season of that companion show left off), and it’s made the Buffy comic one of the best-selling indy books; it’s taken 40 issues to cover the eighth season, and they’re now ten issues into the ninth, making this much more canonical for fans, not merely the cheap knock-off of the original broadcast stories that most comics adaptations provide.

With 40 years of experience in comic reading, collecting and reviewing, English Professor Phil Mateer has an encyclopedic mind for comics. Feel free to ask Phil about storylines, characters, artists or for that matter, any comic book trivia. He will post your questions and answers on the AABC blog. His knowledge is unparalleled! He is also our warehouse manager, so if you are looking for that hard to find comic book, ask Phil!
View all posts by Phil →
This entry was posted in Promotions, Reviews and tagged B.P.R.D., Badger, Bionic Man, Black Terror, Blood Sword, Bone, Buffy the Vampire Slayer, The Boys. Bookmark the permalink.