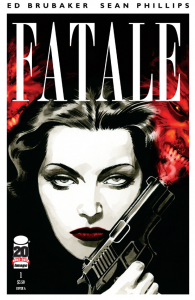 Fatale is the latest crime/noir book from the Brubaker/Phillips team; it’s distinguished from the various Criminal stories because it mixes in a fantasy/horror element. It’s also very well done; this first issue is a textbook example of how to set up an intriguing cast of characters: a damaged hero, a mysterious woman, shadowy pursuers, etc. Brubaker and Phillips, as always, make a smooth team — if you’re going to build a story around a woman who’s irresistible to men, you need an artist who can deliver that, and Phillips can do both sexy and hard-boiled with the best of them (he can do horror, too, as he demonstrated with Marvel Zombies, so Brubaker, like all good collaborators, has played to all of his strengths with this comic). Best book of the week. 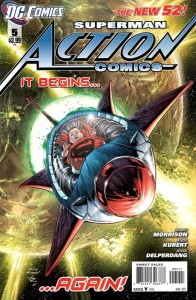 This is mostly a flashback issue, showing the events on Krypton that led to the young Kal-El being rocketed to Earth, and setting up elements in current Superman continuity like the Phantom Zone, Krypto, the Kents, etc. (it’s also got a flash-forward scene, involving a mysterious group of villains and a familiar trio of time travelers, accompanied by an older Superman than we’ve seen in the book so far). It’s interesting that Morrison held off on this until the fifth issue of the new volume of Action, preferring to establish the young Superman in Metropolis first, but that was a good narrative choice: what happens in this comic  is complicated — Morrison complicated — and has a lot of insidery elements that wouldn’t have attracted the new readers picking up an earlier issue. As is, this isn’t satisfying as a stand-alone comic — too many plot features are unresolved — but it should work fine as part of the larger mega-story that Morrison is weaving here. 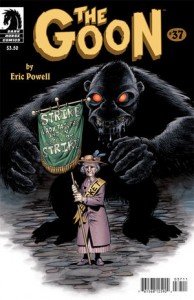 Powell has such a wicked, over-the-top sense of humor (see: Satan’s Sodomy Baby) that it’s easy to think that’s all he has to offer, but not so: he’s a very careful, detailed artist, and he has a knack for horror. This issue of The Goon, which involves a thinly-fictionalized version of New York City’s Triangle Shirtwaist fire ( a sweatshop disaster that killed 146 workers in 1911, and led to the rise of workplace safety regulations) demonstrates something else, too: a sense of history, and an outraged anti-robber baron, pro-union stance worthy of a Wobbly. It’s passionate, well-researched, well-drawn, and still has the little quirks and funny bits that Goon readers expect: all in all, an impressive change of pace, and a useful reminder of Powell’s multifaceted talents.

Four issues in, this might be a novel of demonic possession, but it definitely involves a woman who keeps dying and reviving, somehow, and a number of seemingly-innocent people doing very bad things (including a compelling little girl in bunny slippers). It’s very low on the mystical mumbo-jumbo, though: there’s a page or two of medical talk that indicate that Moore has worked this out just as well as the scientific quantum-mechanics stuff in Echo; that, and the typically-well-composed and pretty-looking (and spooky) art, continue to let readers know that they’re in very competent hands. 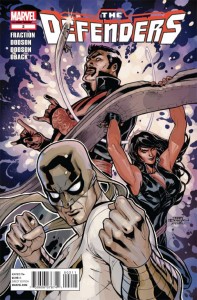 Fraction, as with most of his books, seems to be having fun here, and it’s infectious: there’s the cosmic storyline, involving an insane Prester John, a universe-sustaining “concordance engine,” and Nul, the Breaker of Worlds from the Fear Itself mini-series; there’s the Defenders team of Dr. Strange, Red She-Hulk, Silver Surfer, Iron Fist and Namor, bickering and interacting in lots of interesting ways (Strange’s method of turning She-Holk back into Betty Brant, and her reaction, are a good example, as is Iron Fist’s woozy reaction to John’s mental restraining methods); there’s even all the little ’70s-style blurbs at the bottom of each page, some of which are legitimate plugs for other books, and some of which seem to be making a meta-commentary on the events in this one. Altogether, there’s plenty to keep the reader entertained, so here’s hoping that this incarnation of Marvel’s lesser-known superhero team generates enough buzz for a long run. 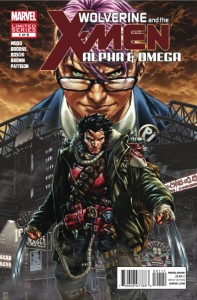 Wood’s more known for indy books like Demo or DMZ than for superheroes (although Demo had elements of fantasy, and its many characters sometimes had small, offbeat powers), so this mini-series offers a change of pace for him. It’s Quentin Quire trapping Wolverine and Armor in a futuristic, Blade Runner-esque videogame landscape in their minds, just to be a jerk. The art’s just OK, but having different teams handle the “real” and the fantasy scenes is a smart idea, and the setup is intriguing enough to bring readers back for another issue, at least. 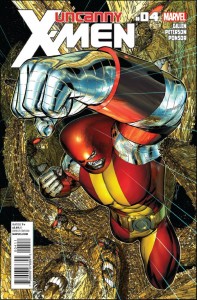 A tale told from the point of view of the last surviving bit of the old Phalanx (the alien hive intelligence that made everyone and everything it touched into metallic, zombie-like parts of its whole), as it makes inadvertently-murderous attempts to survive on Earth, contact the rest of its race in outer space, and avoid the X-Men. If every issue was like this, readers would miss the typical soap-opera subplots and character interaction, but for one issue, its antagonist’s-perspective narration is an effective break from the book’s regular proceedings. 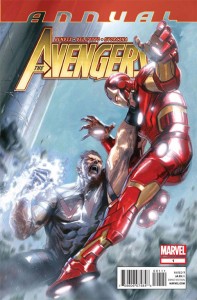 The second part of the story begun in last summer’s New Avengers Annual, as Wonder Man, somehow convinced that the Avengers are a fraud that cause more damage than they prevent, has pulled together a team of C-listers to defeat them. It’s more of a collection of character bits and battle scenes than an actual story — there’s no overall beginning-and-ending narrative structure, despite its 32 pages; instead, things happen and then stop, to be resolved in later books — but since the art’s relatively cool-looking and the writer’s been the primary architect of the Avengers books for the last five years, regular readers probably won’t mind. 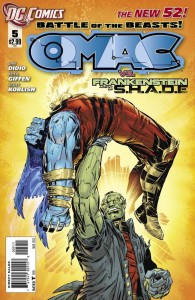 Lemire’s on board because most of the issue is a slam-bang battle between his Frankenstein, Agent of S.H.A.D.E. title character and O.M.A.C. (two characters with a lot of acronym periods between them…). As with all the issues of this book so far, it’s worth reading because of the Kirby-esque artwork by Giffen (with coloring by “Hi-Fi,” and sound-effects lettering by Travis Lanham, that complement the tribute, and enhance the general energy level, enough to deserve special mention here). 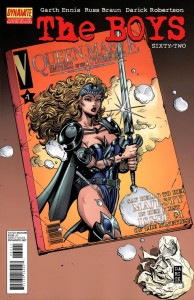 After over five years, the end’s in sight for this part-parody, part-romance and all-extreme superhero series. Credit to Ennis for making it unpredictable: while most of the minor characters are cartoons, the major ones — both good and bad — are complicated enough, with their various strengths and weaknesses, to make the book’s ultimate outcome hard to call. That refusal to take the easy narrative path has helped to keep readers hooked (the violence and sex alone aren’t enough; just ask all those terrible zombie books from Avatar), and if Ennis can pull off a satisfying conclusion in a few issues, this will be a worthy companion to his earlier Preacher.

With 40 years of experience in comic reading, collecting and reviewing, English Professor Phil Mateer has an encyclopedic mind for comics. Feel free to ask Phil about storylines, characters, artists or for that matter, any comic book trivia. He will post your questions and answers on the AABC blog. His knowledge is unparalleled! He is also our warehouse manager, so if you are looking for that hard to find comic book, ask Phil!
View all posts by Phil →
This entry was posted in New Comics, Reviews and tagged Action Comics, Avengers, Defenders, Ed Brubaker, Eric Powell, Fatale, grant Morrison, Matt Fraction, O.M.A.C., Rachel Rising, Sean Phillips, Terry Moore, The Boys, The Goon, X-men. Bookmark the permalink.