It Came From the Back Room #39 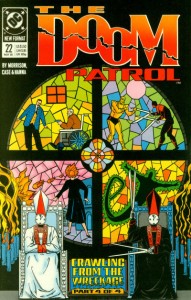 Standard recap: I’m slowly going through AABC’s one-million-plus back-issue room, restocking the boxes on the sales floor and pulling stuff to sell as discount/overstock/special items (these are featured at the discount racks at the west end of the store for two weeks after each post, and then go to the discount racks on the east end of the store for a few weeks, and then disappear into our warehouses, so get them while you can). I’m going through the alphabet backwards (don’t ask), and at my speed (especially with the school semester starting up again), this amounts to a two-and-a-half-year project.  This week, I put out two “D” titles, one from Marvel and one from DC. The Marvel book was Dr. Strange, but we’ll cover that next time; this week, let’s tackle the DC title: 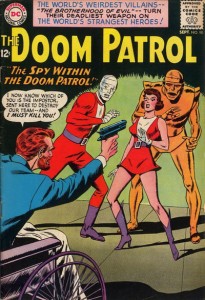 The original version of DC’s “World’s Strangest Heroes” ran from 1964 to 1968, and featured three characters who were outcasts: race-car driver Cliff Steele, whose body was destroyed in a wreck but whose brain was transferred into a metal body, making him Robotman; Rita Farr, whose stretching powers made her Elasti-Girl; and Larry Trainor, whose radioactive body required that he be wrapped in bandages 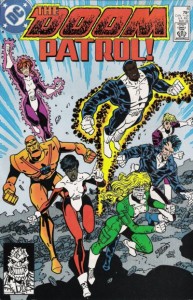 for the protection  of others, but who had the ability to project a flying, negative-image “energy being” out of his body (but only for a few minutes at a time; otherwise, he’s die). The three were led by the wheelchair-bound Niles Caulder, a brilliant scientist who took the bitter misfits and molded them into a superhero team. In one of those weird coincidences in comics history, the book first appeared about three months before X-Men #1, which also featured outcasts led by a brilliant guy in a wheelchair. The Doom Patrol was cancelled in 1968, in what was then, for comics, an unusual way: the team died in the last issue, blown up by bad guys.

The next incarnation of the series (and the first one that matters to us, 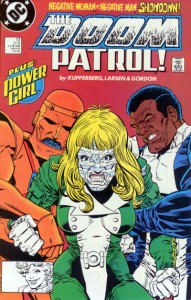 since they’re the first ones we have discount issues of) appeared in 1987. It was revealed that only Robotman had survived the explosion (although, comics being comics, over the years the other three characters have all turned up, too), and he was paired with new characters Tempest (who could project energy blasts from his hands, one of those visual-but-generic powers that comics creators love), Negative Woman (a Russian astronaut who’d encountered the negative energy being that had been in Larry Trainor, and absorbed it), Celsius (heat and cold blasts, plus she was the wife of the presumed-dead Niles Caulder, and the reason the new team got together), Lodestone

(magnetically-enhanced strength), Karma (psychic defensive powers) and Scott Fischer (heat projection from his hands). This team hung around for the first 18 issues of Doom Patrol volume 2, written by Paul Kupperberg and drawn, first, by Steve Lightle and later by a young Erik Larson. The episodes are mostly generic mid-’80s superhero storytelling, and largely forgettable (at least, I forgot most of them; I read the issues when they came out, but needed Wikipedia and a quick flip-through of the comics to recall any of it). 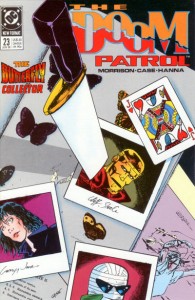 accompanied by artist Richard Case, and they immediately supercharged the book. Morrison got rid of all the characters except for Cliff (Tempest stuck around as the team doctor, the Negative Being left its host and ended up being Larry Trainor again (sort of — don’t ask), and Lodestone was in a coma; everyone else was either dead or wandered off, never to return), and added two others: Dorothy, a simian-featured little girl with “imaginary friends” whom she could control, and Kay Challis, called “Crazy Jane,” a traumatized woman with 64 multiple personalities, each with a different superpower. 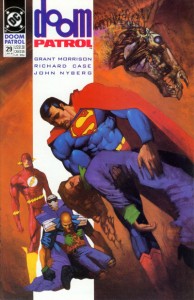 Comics fans are used to the Morrison brand of weirdness now, but 23 years ago it was brand-new, and a revelation after the standard antics of the previous team: there were the Scissormen, who could cut people out of reality; Red Jack, who tortured butterflies to survive and thought he claimed to be the reincarnation of Jack the Ripper; the Brotherhood of Dada, who were led by Mister Nobody, featured The Quiz, who had “every superpower you haven’t thought of yet,” and had a magical painting that led to dimensions based on types of artistic criticism — and that was all in the first year! That year ended with one of the best single issues of the series — Doom

Patrol #30, wherein Cliff travels into the mind of Crazy Jane, who’s catatonic, and meets most of her personalities, while discovering what fractured her personality in the first place. It’s a haunting tale, told cleverly and subtly, and with images — Jane’s mind as a subway station and her personalities as different stops; Cliff, told that “no man” can enter a particular stop, standing and spreading his robotic hands and saying “Look at me. I’m not a man” — that linger long after the reader is through with the book. 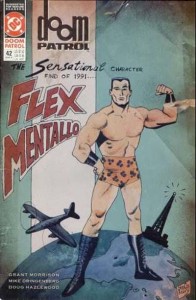 Morrison stayed on the book through issue #63, mostly accompanied by Case (with a few exceptions — Kelley Jones in #36, for example, and Mike Dringenberg in #42, cover-featuring “Flex Mentallo,” a character based on the strongman in the old Charles Atlas ads that ended up getting DC sued by Atlas himself); special mention should also be made of the painted covers, often by Simon Bisely, starting with issue #26, which gave the book a distinctive identity on the comics racks. Almost every issue’s worth reading — and 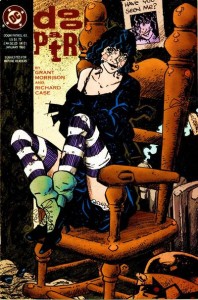 completists shouldn’t miss 1992’s Doom Force Special, a one-shot by Morrison and a number of artists that’s a satiric, vicious takedown of Image comics in general, and Rob Liefeld in particular — all the way up to the last book of the Morrison era, #63, wherein Crazy Jane is trapped in “our” world, institutionalized and subjected to electroshock therapy, leading to a poignant, perfect ending, half-optimistic and half-despairing (depending on whether you’re Jane or the reader).

Morrison’s departure wasn’t the end of Doom Patrol, though — writer Rachel Pollack took over with issue #64, and managed to keep the weirdeness percolating nicely, if not quite with the spice supplied by Morrison. Case stayed as artist for four issues, replaced by some interesting choices thereafter: Linda Medley (of Castle Waiting) in issues #68-74, and Ted McKeever in #s 75-79, 81, 82 and 84-87 (with the Pander Brothers in #80), which represented the end of the run.

The next version of Doom Patrol came along 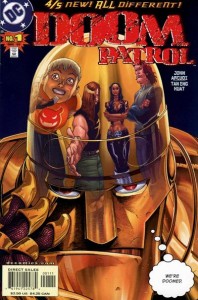 in 2001; as with the previous version, its only connection with the others was Cliff Steele. The writer was John Arcudi (known for Dark Horse series like The Mask and a number of Mike Mignola-related titles), while the artist was Tan Eng Huat, who brought a quirky, cartoony style that meshed well with Arcudi’s tongue-in-cheek, arch scripts (in this incarnation, Cliff was the mentor to a group of teen and twenty-something outcasts who bicker and bond like an MTV 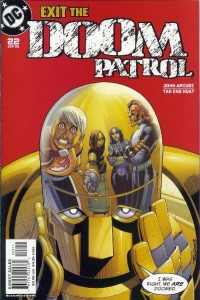 Real Worlds season). Arcudi and Huat stayed for all 22 issues of this volume, with two notable exceptions: #s 13 and 14 are by Seth Fisher (the idiosynchratic artist known for his obsessively-detailed, oddly-appealing manga-esque style (Fantastic Four: Big in Japan; Flash: Time Flies and Vertigo Pop: Tokyo), who died at the age of 33 in 2006 after falling from the rooftop of a nightclub in Tokyo), and issues # 20 and 21 are by Rick Geary, known mostly for his small-press titles focusing on true-life murder stories and on Victorian life.

Volume four of Doom Patrol followed very quickly, in 2004, and was a John 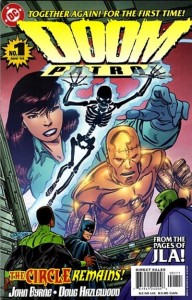 Byrne production. It started strongly (it was led into by a vastly-hyped, six-part JLA crossover by Byrne and Chris Claremont), but was a reboot, erasing all the previous history of the team and starting over with the original cast of Robotman, Negative Man and Elasti-Girl. It had the typical Byrne advantages of clean, lively art and plotting, but quickly gradually lost both steam and sales, ending after 18 issues.

The most recent comic called Doom Patrol, volume five, started in 2009 and ended last July, after 22 issues; it had scripts by Keith Giffen and featured the three original members, although there were callbacks to previous versions of the team too — issues 3 and 4 are Blackest Night tie-ins, and feature the dead, Black Lantern-animated characters of Celsius, Negative Woman and Tempest, while issue #5 has the Negative Spirit reflecting on its previous host bodies, and has cameos from practically

everyone who was ever in a Doom Patrol comic. Matthew Clark and Ron Randall supply most of the art for the run, although Giffen himself draws #16. Issue #19 has the second installment of a crossover with the Secret Six comic, and the final issue, #22, has a typically-Giffenesque ending, as Ambush Bug appears, to whisper to the bad guys that the book has been cancelled, pending the DC Flashpoint reboot; that said, everybody strikes the set and walks away, leaving the heroes to wonder what’s going to happen next. That’s where they are today — is there a place in the new DCU for the World’s Strangest Heroes, especially considering that their history is, again, set back to square one, and that they’ve had three failed relaunches in the last ten years? Only time, and reader interest, will tell….

With 40 years of experience in comic reading, collecting and reviewing, English Professor Phil Mateer has an encyclopedic mind for comics. Feel free to ask Phil about storylines, characters, artists or for that matter, any comic book trivia. He will post your questions and answers on the AABC blog. His knowledge is unparalleled! He is also our warehouse manager, so if you are looking for that hard to find comic book, ask Phil!
View all posts by Phil →
This entry was posted in Comics History, DC, News & Promos, Reviews and tagged Crazy Jane, Doom Force, Doom Patrol, grant Morrison, John Byrne, keith Giffen, Richard Case, Robotman. Bookmark the permalink.

One Response to It Came From the Back Room #39