It Came From the Back Room #5

Standard recap: I’m slowly going through AABC’s one-million-plus back-issue room, restocking the boxes on the sales floor and pulling stuff to sell as discount/overstock/special items. I’m going through the alphabet backwards (don’t ask), and at my speed (especially with the school year now in full gear), this amounts to a two-year project. I’ve currently finished the indy “M” books, and have started on the Marvel and DC “M” stuff.  Here are some of the titles I’ve been encountering: 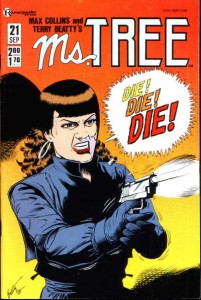 For everyone who thinks that crime comics started with Brian Bendis or Ed Brubaker, here’s a true hard-boiled gem, an undeservedly-overlooked book from the ’80s with stellar writing from Max Alan Collins (scripter of dozens of crime novels, the Dick Tracy comic strip, and the graphic novel Road to Perdition) and clean, clear, hard-as-nails art from Terry Beatty (probably best known to comics fans as an inker for DC, mostly on all those cartoon-inspired Batman comics). The Ms. of the title is Michael Tree, whose detective husband is killed on their honeymoon, and who thereafter fights the mob and various crooks with her fists, wits and enough ammo to take out the North Korean army. 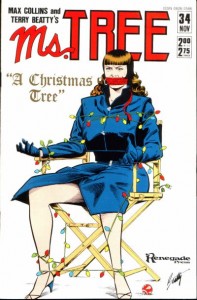 Collins keeps things reality-based but suitably noiry, and is very good at the vanishing ability of telling effective short stories in just one issue (two at the most), while keeping subplots bubbling away merrily in the background (Ms. Tree’s relationships with her young stepson, and with the equally tough-as-nails woman who’s her opposite number, as the head of the Muerta crime family, play out over almost all fifty issues of the title). Second-Amendment devotees, especially, will appreciate Collins’s conservative-but-balanced takes on weaponry, self-defense, and why it’s OK to blow away scum, especially because it’s never preachy, and all done in service to the story, and with obvious affection for his appealing characters. At a buck or two each, these are consistently damned entertaining comic books. 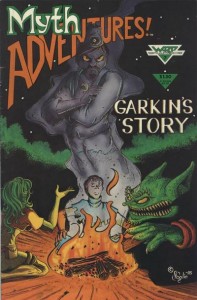 This is a comic adaptation of the Robert Asprin sf/fantasy series about a grouchy-but-benign demon named Ahz, and his apprentice-wizard sidekick. The books are pun-filled romps, fast-moving, cynical and light as air. The comic adaptation of the first novel is especially notable because the artist/adapter is Phil Foglio, best-known today for his work on the web- and print-published steampunk series Girl Genius (which just won its second Hugo award for best graphic novel a week or two ago). The first six of the eight-book adaptation are in magazine form (and not in overstock, but ask: we have them for under $5 each); issues 7 and 8, though, are regular black-and-white comics.  The Foglio connection, combined with the original Asprin story, makes for a great combination, , and a rare adaptation that’s better then the original novel; they’re overstuffed with sight gags, clever bits, and Foglio’s trademark cartoony-but-very-accomplished art. Later issues (#9-12) feature a new story by Asprin and art by a young Jim Valentino (post Normalman, but still considerably pre-Shadowhawk). An adaptation of Asprin’s second novel, Mythconceptions, has art by Beth and Ken Mitcherony, in an even more bigfoot (almost Hanna-Barbera) style. These later efforts would seem OK enough if they existed by themselves, but pale in comparison to Foglio’s higher-level work. 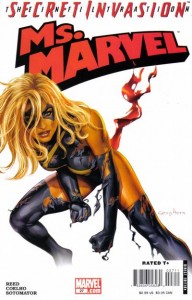 The ’70s series has its moments — the Claremont/Infantino issues are fun, and are even a small part of the interwoven X-mythology that he was creating at the time, including the first Mystique appearances, in #s 16-18 — but only a handful of that incarnation ended up as overstock (and, no, none of the Mystique ones).

We do have a lot of copies of the second volume, the one that started in 2006. They aren’t terrible, and every so often an issue stands out (the Spider-Man teamup, and, oddly enough,  the Dark Reign issues with Karla Soften/Moonstone usurping the “Ms. Marvel” identity), but they’re generic early-21st-century Marvel superhero books, pieces in the big sprawling jigsaw puzzle that’s the Civil War/Secret Invasion/Dark Reign Marvel Event Universe. Still, the Greg Horn covers that adorn many of them are kind of cool, and we have a lot of ’em, in good condition and at cover price; if you want them, here they are.

With 40 years of experience in comic reading, collecting and reviewing, English Professor Phil Mateer has an encyclopedic mind for comics. Feel free to ask Phil about storylines, characters, artists or for that matter, any comic book trivia. He will post your questions and answers on the AABC blog. His knowledge is unparalleled! He is also our warehouse manager, so if you are looking for that hard to find comic book, ask Phil!
View all posts by Phil →
This entry was posted in Comics History, Reviews and tagged Greg Horn, Max Alan Collins, Ms. Marvel, Ms. Tree, Mystique, Mythadventures, Phil Foglio, Robert Asprin, Terry Beatty. Bookmark the permalink.