The Latest and (Mostly) Greatest #33 by Dan!

So we’re back in business, and now we’re taking on the number twos, which sounds weird to me, but I’m also a 12-year-old, so that makes it funnier. Before attacking the DC relaunch, we’re actually gunna hit up some other comics, including more #1’s, that are worth noting this week. Let’s do this! 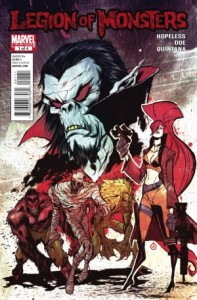 I don’t know why I love this book. To put it simply, it’s a team-up monster comic that’s absolutely hilarious. It’s in the style of things like N.E.X.T.W.A.V.E. and it’s damn good, especially for a book with an author whose last name is “Hopeless…” Then again, who am I to judge?

Worth noting because it actually came out, and hot damn, is it pretty! Weaver is one of the best slow artists out there, and it was just fun to look at. However, it was a mostly silent issue. Silent issues…i.e..not many “word balloons”… do absolutely NOTHING for me, but Eddie absolutely loves ’em, so good for him.

Oh man. This is exactly what I wanted it to be. Picking up the pieces from his work on Starman (how does that fit in the DCnU? Don’t ask.), Robinson absolutely tears this up. Not sure how accessible it is to new readers, but I loved it, so deal with that. 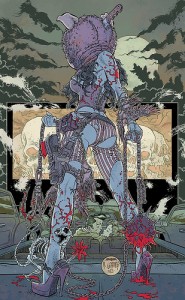 This was not what I expected, and it was awesome. (I agree…editor “Alan.”) Start with the Grampa cover, add in stories with art from David Lapham, Jill Thompson and Dave Gibbons, and you’ve got a Really Awesome Random One-shot.

This is weird, and your last chance to see the line-up shake out for the new X-books. It’s… not very good, but I really don’t like Billy Tan. Check it out to literally see them take sides, but otherwise skip it.

This is the continuation of the Weird Worlds mini-series from before the relaunch. Now instead of a Lobo story, there’s a really sweet Matt Kindt/Scott Kolins Robotman story. This is exactly the kind of quality you want from an anthology book, and it’s almost a must-read.

Now onto the DC Number 2’s! Phil stepped up and kept it going, so how can I say no? Get ready for a lot of words! 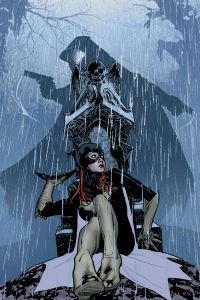 So apparently this one hit some delays. It was around the first week of the #1’s, but dropped into my lap for week two. Red Lanterns #2 jumped up to fill the void and, long story short, that one still has creatures puking blood. In the meantime, I get to go after Batgirl, a comic that I don’t really like very much. There’s nothing especially wrong with it, I just don’t really find myself caring that much about Barbara Gordon anymore. It could be fatigue due to the media freakout about her un-crippling, but the story just isn’t doing much for me. The new villain isn’t really a bad guy, but turned bad to attack everyone on his ‘list’, and I just end up thinking “meh.” 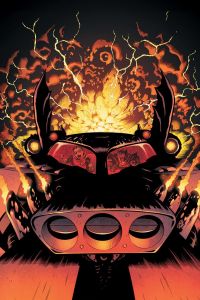 Ok, there’s a lot of this that I don’t really understand. First off, the art is very, very pretty. Just look at that cover! Aside from the fact that it kinda looks like it could be Spider-Pig’s car, the whole book is very nice to look at. However, for a #2 issue, things should be in motion. In this issue, Bruce Wayne worries about Damien and adopts a dog. That’s honestly almost all that happens. There’s a random dude who shows up that I think might be the guy from the original Stormwatch, but I don’t know. Bruce Wayne tells him to go away, and the dog just kinda growls. I don’t get the point here, but maybe I will later. 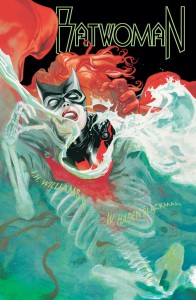 This book is going to continue to be worth it for the art alone (seriously, a double-page spread made me stop and just look at art, which is really saying something). The story continues from the previous Detective run (See the trade Batwoman: Elegy), and picks up from Williams previous work on Chase. It’s absolutely beautiful stuff. You shouldn’t even remotely be surprised by that. In my humble opinion, this is one of, if not THE, best books that the relaunch has put on the table. Absolutely worth checking out, and I can’t see why you’re not.

Bennett’s art looks so much like Jim Calafiore it’s bordering on stealing. I’m conflicted by this comic. Don’t get me wrong; it’s totally stupid, but I find myself enjoying it. It’s literally “How Deathstroke got his Groove Back” in that he sets up a situation that gives him extreme amounts of credibility by killing as many people as he possibly can. It’s violence for the sake of violence, but it’s not poorly written. I feel like it’s completely self-aware of how dumb it is, and I find myself oddly enjoying it. 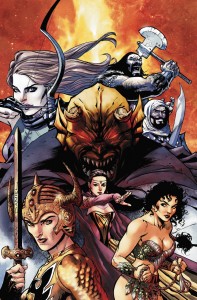 This is the first Paul Cornell book I’ve ever actually purchased, and that’s just because it’s so much damn fun. Vandal Savage takes his last name literally (see eating dinosaurs), the Demon mocks his own rhyme scheme and all they have to do is fight a bunch of ridiculous animals and villains. This is the best use of relatively obscure characters (Morrison’s Shining Knight for example), and I’m loving every minute of it. It’s stupidly fun stuff that’s crafted exactly how comics should be. 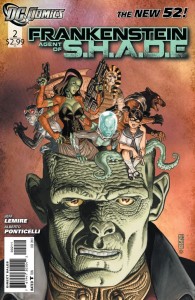 The origin of the Fish Woman! Lemire realizes this is a book of monsters, so he embraces that by having them fight… monsters. He also puts together that old adage “Who’s more monstrous? Frankenstein or the Religious zealots who are sacrificing children for their own survival?” Ok, that’s not really an old adage, but you get my point. It’s an extremely fun comic that takes advantage of the ridiculousness of the entire concept. I was enjoying every minute of it, and it has been the biggest surprise for me in the DCnU. I expected it to be good, but not THIS good… 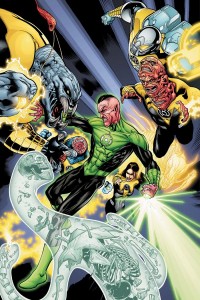 Do you guys get tired of me worshiping this book? Well too bad! It’s still really awesome. We’re headed into new territory, with Sinestro completely controlling Hal Jordan’s ring and his ability to use it. While Sinestro is a smug A-hole, he’s by far more interesting than Jordan, and the way he solves all the problems is really eye-opening. I feel like this comic would be completely inaccessible to new readers, but as their best-selling book, should DC really care? Go buy the trades and catch up. Seriously. 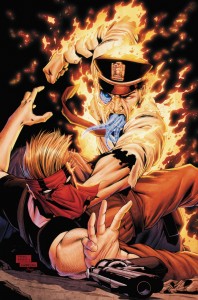 I just don’t care about Wildstorm concepts, and this is no exception. I like the main stuff, meaning Stormwatch and the Authority, but things like Grifter do absolutely nothing for me. I’m enjoying the “no one believes me, so I have to keep killing people” concept that this story is running with, but I can’t see it maintaining the course for that long. I also still don’t see how this is tying into the entire universe overall. Much like I, Vampire, I just don’t see what makes this in-continuity. Oh God, I’ve started complaining about continuity. I’m a nerd. 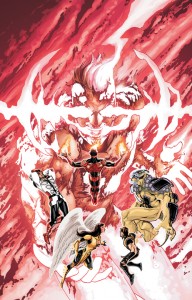 As we discussed last week, this is not a comic for me. I looked at the formatting to see if I could only use a couple sentences about this comic to fill space, but I can’t, so I have to ramble here. I’m just not a fan of the Legion, and a story involving the characters “stuck in out time” is just not something that works for me. Pete Woods is a good artist, and this issue is better than the first, but still, absolutely nothing for me. This is a comic that I’m sure Legion fans will like, but it seems almost completely inaccessible to the rest of us. Bummer. 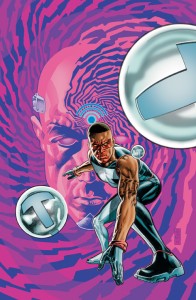 What are the odds that the guy who wrote the mediocre Titans series would write a mediocre Mister Terrific series? Almost 100%, and that’s what we get here. It’s just a whole big pile of “meh”. It’s the kind of book where you’re 10/13 of the way through writing reviews and you realize that you don’t have much to say at all. This is a book that wouldn’t shock me if it was cancelled early and quickly. It’s too bad because I do like the character, but there’s just nothing here to draw in readers and keep them around. It’s definitely my “meh” of the week, and that’s nothing special folks. 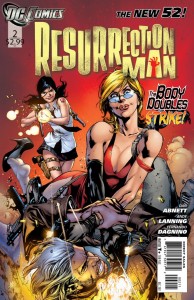 I love this concept, but I’m not sure I love this comic. It’s a fun idea (every time he dies, he gets resurrected with a new power, but doesn’t know what that power is until he uses it) but the story just involves some unknown guy coming after Resurrection Man and sending the goons to come after him. It becomes a generic “Who am I? What are you? What have I done?” kind of story that’s basically boring. It’s done really nothing for me in the first two issues, but I feel like it has so much potential. We’ll see, we’ll see…

Hmm. I think I see where this is going, and I just don’t like it. We all know Deadshot and Harley are going to keep surviving through this whole thing, and probably the same for King Shark, but everyone else is just going to be cannon fodder. That includes all the civilians in this story. Let’s see how many people we can kill that aren’t our “classic” characters! I just don’t like it. It’s ok; it’s well put together but it’s not something that I could see people liking. No offense if you like it, I’m just saying, what is the audience for this book?

I think it’s a really good idea to have Lobdell write both Teen Titans and Superboy. It brings this confluence between their younger hero books and opens up the opportunity for crossovers much easier. It’s a smart move. However, the books just aren’t anything special. It’s a very mediocre book that doesn’t really give me much hope for anything else that is coming down the pipeline from Lobdell. It’s just not a story I find myself caring about that much, and I’m disappointed in myself. Or maybe I’m just blaming myself for mediocre comics. Yeah, we’ll go with that second one.

The “Good Enough” Pile: Stuff I’ve talked about at length and don’t really have much left to say:

And that’s it! I’ll be back later with more stuff, as per usual.