All right folks, I’m back. I’ve got nothing fancy to say and I don’t want to ramble. I’ll save that for the actual reviews. Let’s do this! 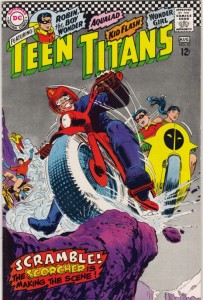 So here’s my problem with the Teen Titans in a nutshell. This comic has them fighting a bully. Robin gets invited to participate in a motorcycle race in a ghost town (not kidding), but this one guy is a big jerk and tries to ruin the race. It’s essentially Wacky Races, with the bad dude as Snidley Whiplash and everyone else as Penelope Pitstop (how obscure was that reference?). What bugs me is that the bad buy ACTUALLY defeats the Titans! I know he eventually ends up losing, but a jerk on a motorcycle is able to stop all the Teen Titans, at least temporarily! It’s kinda ridiculous that the team that would eventually take down Deathstroke consistently would be stopped in the 1960’s by a bully with a motorcycle! It doesn’t make any sense. But it is hilarious to have Aqualad get a bunch of dirt dumped on him… More info can be found HERE

The Teen Titans are obviously still around, but the teams are all wonky. Dick Grayson is on his own as Nightwing now. The Teen Titans now consist of Superboy, Kid Flash, Wonder Girl and Red Robin. And Red Hood and the Outlaws is the only place to find Speedy. As for Aqualad? Dead. Bummer. 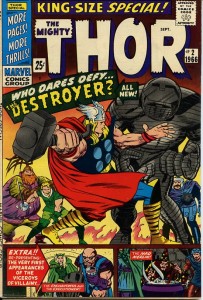 This comic is everything that an annual should be. The first story is completely brand-spanking-new and features essentially a whole bunch of gladiator scenes with Thor and the Warriors Three. The ideal way to write a Thor story is to get as many of the characters involved as possible, add a whole lot of fights, and just enjoy yourself. That’s why the movie worked, and that’s why this comic works. In addition, it features two short stories from past issues. If you, as a kid, couldn’t afford to get back issues, this Special would act as the perfect place to actually catch up on what you missed. This comic is a whole lot of fun wrapped in a big ol’ book. More info can be found HERE

Thor’s still around. He’s one of the main characters in the Fear Itself storyline. It includes the Mighty Thor and Journey Into Mystery. If you haven’t seen the movie yet, you should. It’s pretty rad. 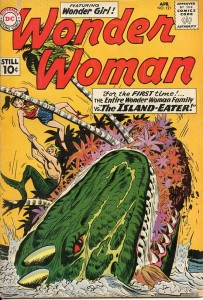 So, apparently Wonder Woman has the ability to blow a jet-stream of breath, and I don’t really have any jokes to crack about that. This, like Teen Titans, is a weird comic where Wonder Woman is dealing with really stupid things. This time, it’s saving cheerleaders from a hostage situation on a Ferris Wheel (I’m not kidding). I’m really unfamiliar with the whole Wonder Woman, Wonder Girl and Queen Hippolyta dynamic, but it’s in full force here. I think that at this point in time, Wonder Girl was just a young version of Wonder Woman, but seriously, don’t get me wrong, I honestly have no idea. A mermaid falls in love with Wonder Girl, so there’s that. More info can be found HERE

Wonder Woman is still around in the Justice League and her own comic. Apparently the DCnU gives her a new origin (Zeus is her dad! drama!) but other than that it’s just a damn good comic. Check it out if you actually like spending your money on things you like.

And that’s it! I’ll see you all in a couple weeks!