The Latest and (Mostly) Greatest #32

All right folks, it’s officially the last week of the DC 52 relaunch. So I swear it’s the last time Phil and I will ramble on about new DC comics (Well, I’ll make that promise. Ya never really know with the Professor). Just like two weeks ago, I’ll give quick sentences about other important stuff, then do the big 13 releases of the week. Let’s do this!

The New Avengers #16.1 Writer: Brian Michael Bendis Artist: Neal Adams: Oy. Adams is now going crazy all across the DC and Marvel universes. It’s interesting to say the least, and set-up for the next set of New Avengers stories, but nothing special.

DeadpoolMax #12 Writer: David Lapham Artist: Kyle Baker: The end of this first volume is explosive and just as wonderful as it’s always been. It’ll be back folks. Just you wait.

Wolverine #16 Writer: Jason Aaron Artist: Goran Sudzuka: This. Is. Amazing. It wraps up everything that Aaron has been doing and it does it in a really beautiful way. So good. So, So good.

This is a continuation of the Jonah Hex series picked up by the same writing team of Gray and Palmiotti. The addition of Moritat make this book more cartoony, but as long as he can stay on the book, this will continue to be the premier western book that any comic company puts out. What’s different about this from the previous series is that now they will have ongoing stories as opposed to one-shots. With Jonah Hex now arriving in Gotham City, he meets up with the Cobblepots, Arkhams and more traditional Gotham characters. It’s a great first issue, a great jumping-on point, and a perfect comic. 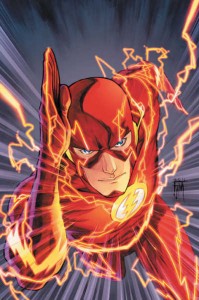 It’s interesting to note that this Flash series starts off WAY more interesting than the entire 13 issues I just read that were written by Geoff Johns. While there was nothing really wrong with that series, it went off the rails after a while. This series picks up the pace and gives Manapul the opportunity to really go off. His page layouts at first look ridiculous, but upon further review you can see how he’s channeling JH Williams, and it works! Single pages tell entire stories and I found myself turning every page with my jaw on the floor. Beautiful beautiful stuff.

This is one of the better works that Geoff Johns has put out in a while. It’s not crazy violent; it actually introduces some characters, and it modernizes the stupidity that is Aquaman. By pairing the team from Blackest Night together, you know you’re going to get quality comics, and that’s exactly what comes from this issue. Johns even dives headfirst into the mockery that has plagued Aquaman since his humble beginnings. It’s almost like Johns had a checklist of things to hit before the issue was done, and it’s a very nice first issue, even for new readers. 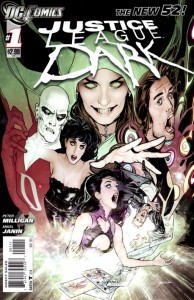 This is Peter Milligan being Peter Milligan, which means it’s way rad. For some reason, DC has decided to give him control of Shade the Changing Man again, and he uses this book to build a team around the character. This is essentially a continuation of the Secret Seven series from Flashpoint, and it’s another “put everything in motion” type of comic. The team begins organizing around all the issues that Enchantress has been having lately (long story short, b-word is crazy). It’s good stuff with lots of dominoes in motion, and it leaves the reader wondering what comes next. 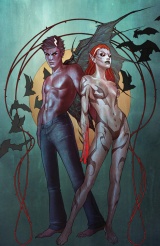 I have no idea what happened in this book, and I don’t think that’s a bad thing. Contrary to the cover, this isn’t come kind of Twilight story. Sure it’s werewolves fighting vampires, but it’s the dark and gritty kind. At first I thought the book was drawn by Jae Lee, and the Sorrentino art is clearly modeled off his style. I can’t tell if this story is set in the present and is meant to be a secret invasion (there are references to other DC superheroes), or if it’s a post-apocalyptic tale that’s also telling us how we got there. It was interesting enough to make me want more, and wonder where this series is going.

I liked this comic way more than I expected to. It’s a lot of set-up, introducing how Kyle Rayner gets his ring, and what he has to do. For new readers, Rayner’s personality is presented in a clear and interesting way. For old readers, it’s a fun rehash of how we got where we are. The only thing I don’t understand is where this happens in the timeline for the DC relaunch. But mostly that complaint is just being nitpicky. This was a better GL book than I had expected it to be, and a pleasant surprise for the new DC relaunch. 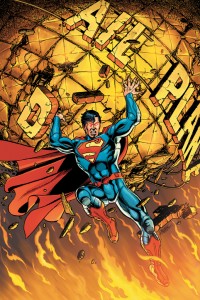 We’re in the middle of the pack with these comics, so I start to figure out how many ways I can say “hmm…” This book is a very serious “hmm…” in that, I’m not sure I even remotely care. The Perez art is (obviously) pretty, but it’s so much in single pages mixed with text-heavy balloons and it really messes up the reading. I always like a comic that takes a long time to read, but when it feels like an actual chore, that’s when you start to lose me as a reader. I feel like letting the pictures (especially since they’re done by George Freaking Perez) speak for themselves. This book is done-in by the fact that it assaults the readers on all fronts.

Booth has a strange anatomy style, but that doesn’t really bug me. What bugs me is how I feel like nothing important happened in this comic. Sure, Wonder Girl and Red Robin got together, and we were introduced to the naive style of Kid Flash, but other than that? Not really much of anything. Also, was that one guy the Shade? Cause it sure looked like him. This is also apparently going to tie-in with Superboy (also written by Lobdell) so watch out for that. This comic left me with too many questions, and not in a “can’t wait for next ish!” kinda way. More in a “Why am I supposed to care if it doesn’t seem like the writer does” kinda way. 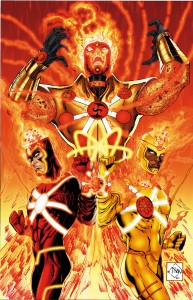 So apparently this a redo for the story of Firestorm, and I’m just not sure I care. It’s taking two people who have been Firestorm before having to work together. Add in some stereotypical racial tension, some stereotypical high school crap and then some weird drama where essentially ALL of their friends are murdered and you get one weird comic. I personally don’t care that much about Firestorm, and I’m not really sure anyone else does. It has the big names attached, but they aren’t putting out their best work. Just a big, BIG Meh. 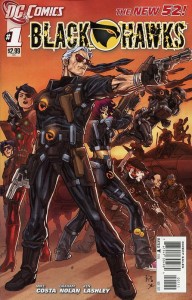 ZZZZZZZZZZZZZZZZZ  What! I’m up! I’m awake I swear. Let me just clean the sleep drool off my shirt. Get it? Cause I fell asleep reading this comic. I read it when it came out on Wednesday, and I honestly have no attachment or any kind of memory to it. I don’t know what happened, I don’t know why it would even matter and I don’t know what the point was. After Men of War, that makes two meaningless army-type books from DC. Not good, they should really make more westerns. At least they’re consistently good at those… 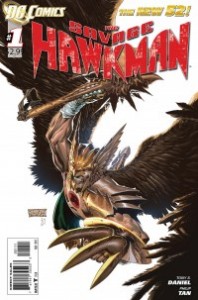 Oh Philip Tan, what am I going to do with you? Originally rumors had swirled that this would be done by James Robinson, but Tony “look guys I ripped off Joker’s face, aren’t I cool?” Daniel hopped on and this thing is just a mess. It’s hard to call it bad, mostly because I just don’t know what went on. Carter Hall burns his Hawkman costume, but then it’s actually a part of him. There’s some “super-awesome” violence that just involves a dude dressed as a hawk fighting some other dude, but there’s nothing really special or worth noting. It’s so low on my list just because I can’t stand Philip Tan’s art! 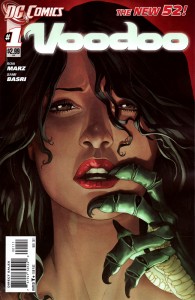 Hey! Are you a feminist? Then don’t go near this comic book. Amidst all the stripteases, lap dances, and “True Life: I’m a Stripper” moments, this book is a complete mess. You can write positive female characters as a male creator, and this is not what we get. There is a good two or three pages of a woman standing up to sexist jerks, but the beginning and end really just take a dump all over those ideas. Now, I understand that she’s a shape-shifting alien, so now she’s a dude, and theoretically that means the next issue should be less stripper-y, but still. C’mon folks… 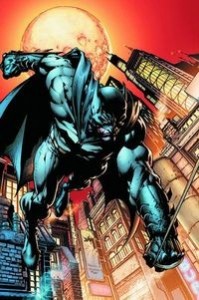 This book was rotten. Just chaotic. Not making any real sense, a random appearance by a chick in a bunny costume, and a generic breakout from Arkham. This book is on the right track to hitting the bottom of the “13” this week. THEN THAT LAST PAGE… OH MY GOD… WHAT HAVE THEY DONE TO TWO-FACE. I will never forgive David Finch for this. Yes I’m being over-dramatic, but I don’t even care anymore. I feel like DC is specifically punking me (yup, a 90s Ashton Kutcher reference) and I am not happy!

And that’s it! Five Weeks, 52 books, all available for you to see reviews of, and most available at the shop. So come check ’em out, and support the good ones (you know which ones I mean…)