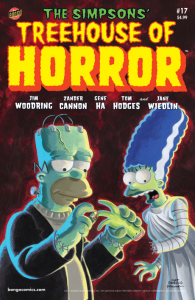 Hallowe’en comics already? Well, yes… October’s beginning next week, and Safeway already has pumpkins out, so it must be time for the Simpsons’ annual gift to alt-comics fans. Woodring’s the most stellar creator in display here, and his offering, a tribute to sleazy off-brand ’50s horror comics, is great fun. So too for the Cannon/Ha contribution that leads off the book, a beautifully-drawn homage to Nosferatu, the 1922 silent movie that was the first vampire film. The Wiedlin/Hodges offers the most on-model art, providing a perfect bridge between the other two as it gives Marge a zombie problem — but not before light-sabre cosplay dressing Maggie as Yoda and Lisa as Leia. All in all, it’s a worthy successor to the last 16 years’ comics, and a reminder of how many top creators can cite the Yellow Gang from Springfield as an influence, and are eager to contribute to their adventures. 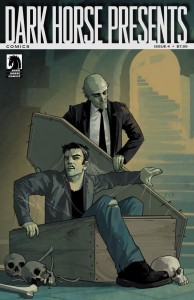 In any non-Treehouse week, this would have been the top book, just on the strength of the eight-page Beasts of Burden tale by Dorkin and Thompson, involving a goblin who’s a chicken thief.  Wonderfully evocative painted artwork, plus the dialogue — “Huss up an’ eat y’mushooms.” Heh. — make it worth the $8 by itself, but add in another 72 pages of ongoing serial chapters by Chaykin and McNeil, plus the starts of new ones by Niles/Mitten (starring Niles’ Cal McDonald occult private eye) and Hogan/Parkhouse, plus the great-looking Age of Reptiles one-shot by Delgado, plus all the other stuff (no Adams chapter this time; could he have missed a deadline? Why, Neal, that’s so unlike you…), and it’s a book that’s hard to deny. 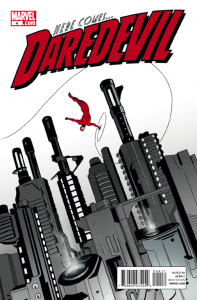 Martin’s clean lines, clear storytelling and willingness to experiment are a perfect match for Waid’s take on DD as a swashbuckler who’s decided to stop moping around and take some delight in his costumed-adventurer role, and Muntsa Vicente’s coloring splashes the book with bright primary colors that make the story pop even more. Go look at the opening three-page sequence — two 15-panel pages breaking the night down the way DD “sees” it, followed by a full-page splash — and see if it doesn’t (a) make you smile, and (b) buy the comic.

Still liking this, including both the art and the gruff dwarven workers (they all swear like construction workers, but in Norse runes, which is unaccountably funny). However, this ends for Tony exactly where Fear Itself #6 did, with a plunge into the molten uru pool; while it fills in a few blanks, readers expecting the story to actually move forward a bit will be disappointed. 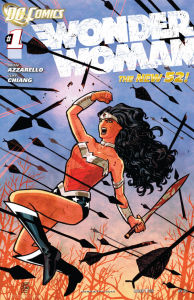 Azzarello has chosen to focus on the mythological aspects of WW, but he does it with a gods-stalking-the-modern-world strategy that’s interesting, and is smart enough to give readers a viewpoint character who knows just as little about what’s going on as they do; that lets him introduce and explain his cast gradually, as the action unfolds. The Chiang art, which has gotten a lot of praise online, seems just a trifle stiff to me, but parts of it are very pretty, and DC deserves points for going with a non-traditional art style in one of its flagship superhero books. 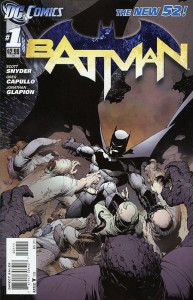 Capullo’s a smart art choice here, too — all those years of drawing Spawn have certainly given him the chops to do flowing capes, rooftop acrobatics and horror. Snyder does a brisk job of setting up the cast (including Alfred, Gordon, a nicely-done Harvey Bullock, Vickie Vale and three Robins), showing what Batman’s about, establishing a mystery and ending on a cliffhanger revelation, all while being friendly to both new and returning readers; out of all the DC #1s this week, this is probably the best at simply being an effective, welcoming first issue. 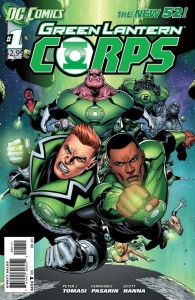 So, too, for this book — Tomasi uses an opening sequence to sketch in the idea of the GLC and set up a worthy menace, then shifts to Earth and introduces his two main GLs, Guy Gardner and John Stewart (making sure to give each a few pages by himself, and set up their character beats and motivations), then takes them (and us) to Oa to show off the planet and get the mission started, and then ends on a suitably sinister note to bring everyone back for the next issue. Pasarin’s art is detailed and appealing; he’s a good choice because he can do human expressions and effective aliens and big widescreen battles equally well. The one criticism is that there’s quite a bit of casual slaughter for a book with a “Teen” rating, but that’s probably me being crotchety; otherwise, as a first issue, this should keep all the former readers of the series, and attract most of the new ones who pick it up, so it’s definitely accomplishing its goals. 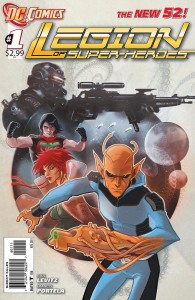 Levitz writing the LSH is Levitz writing the LSH — it doesn’t really matter who the artist is, as long as they’re competent (Portela is, although his panels are sometimes too crowded to allow for easy story flow; of course, in a book with a cast this big, that’s hard to avoid); you’re going to get the same effective characterization, plot and subplot juggling, and slow-building planetary/galactic menaces as always. Unlike some of the #1s this week, this isn’t particularly welcoming to new readers, but to current fans it’s a perfectly good continuation of the series. 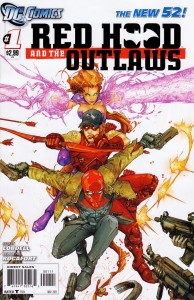 This book’s been getting a lot of online criticism for its reboot of Starfire as a slut, an alien blow-up sex doll willing to jump into bed with anybody; fans with fond memories of the Wolfman/Perez ’80s Teen Titans — including a number of female readers attracted into comics by that book — are understandably peeved by her new bimbo status.  Similar, if non-sexual, continuity surgery has been performed on Jason Todd, who’s now apparently got a history with some ancient secret society, as opposed to his Superboy-punched-the-universe resurrection in old DC lore (on the other hand, he has a line about being a “former sidekick,” so who knows how much of his previous life is still valid?).  The real sin of this book is that, while neither the art nor the scripting are technically bad,  it’s got little humor and no heart, with three unlikeable main characters and a bunch of pointless shooting to go with the pointless cheesecake. 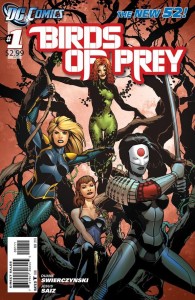 This one’s the definition of a generically-OK relaunch; it isn’t offensively wrongheaded like Red Hood, but the only recognizable character is Black Canary (Barbara Gordon appears in a few panels, although it seems like the former Birds of Prey never happened); Poison Ivy and Katana, who are featured prominently on the cover, never show up on-screen in the actual comic. There’s some running around and fighting, and a guy blows up at the end, but there isn’t much here to make either new or old readers pick up a second issue. 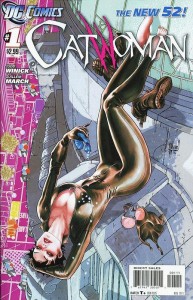 This is the other book that’s created an Internet scandal this week, with its out-of-nowhere last-four-pages sex scene between Catwoman and Batman (and, yes, even typing that sounds stupid). Yes, the ick factor is high, and it lends itself to ready parody (Catwoman’s fingers caressing one of Batman’s little pointy ears? Comedy gold.), but it’s not hackwork like Red Hood; the March art is too good for that, with a number of appealingly eye-catching and sexy moments throughout the book, and Winick, whatever one may think of his storytelling, never just phones it in; there’s enough heart and sly self-awareness here (the”costumes on” line is a callback to Watchmen, for example) to soften the ick and make readers wonder if it might actually be part of an overall plan — at least enough to bring them back for another issue. 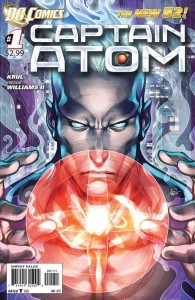 Speaking of Watchmen… the blue, glowing Captain Atom, who’s just learning to use his godlike molecular-manipulating powers, is very Dr. Manhattany — not to mention reminiscent of their common source, Dr. Solar; both the plot and style here feel a lot like Jim Shooter’s two takes on that character.  Not much memorable happens, but this is a good-looking book, with big, eye-catching panels from Williams II and effective coloring from Jose Villarrubia, using a pale-blue and red palette that grabs the reader’s attention effectively. Nice use of lettering to help drive home the almost-obligatory last-page cliffhanger, too. 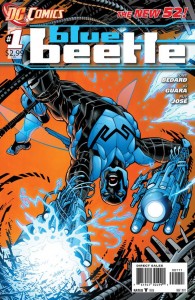 With Batman and Green Lantern Corps, this is the best book at actually being a first issue this week — it introduces the Scarab armor and the alien Reach, establishes their motivations, and then brings us to El Paso and Jaime’s high school, sketching in the characters of  him and his supporting cast and setting the scene for the inevitable bonding of armor and hero that comes in the last page. There’s a lot going on (the Fatal Five? Really?), but it doesn’t feel too rushed or info-dumpy, and it does its job of making readers want to know more about these people, and thus need to buy the next issue. 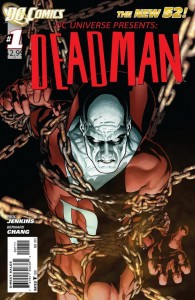 This offers an interesting take on the character — the spirit of Boston Brand has a mission like Scott Bakula’s in Quantum Leap, but without the time travel: as penance for being such a jerk while he was mortal, he enters the lives of the suffering or downtrodden, walks in their shoes for days or weeks at a time, and tries to solve their problems. What’s interesting is that he’s been doing it for a while but failing at it; he can’t see that he’s improved anyone’s lot very much.  That’s not a bad idea, but the execution in this initial episode is just so-so; there isn’t anything memorable about the art, and no event startling enough to leave a lasting impression on the reader. Since this is a showcase comic — Deadman is only going to star for the first six issues — the intent may be to make this more of a trade than a series, with a slower buildup than most of the other first issues require; that’s fine, except that without the high-pressure first-issue sales job, there’s less incentive for readers to come back for more. 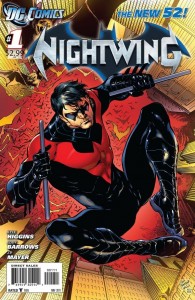 Another generic, perfectly competent first issue – we get some background on Dick (including his previous status as Batman, to remind us that he’s good at his job), and then the bad-guy foreshadowing, and then the traveling circus in town, to establish his backstory, and then the costumed menace and the fight, ending in typical last-page impending death. As with Birds of Prey or LSH, if you were a fan before this issue won’t chase you off, but first-time readers won’t find anything particularly compelling, especially in a week with eleven other first issues clamoring for their attention. 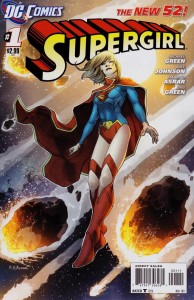 Like Blue Beetle, this book is starting completely from scratch; it’s an origin story, with no prior appearances of its title character left in DC continuity. As such, it’s OK but lacks heft: a rocket crashes; Supergirl in costume emerges; she fights some guys in robot suits; you-know-who shows up on the last page. Nothing’s offensive, but no particular panel or image or thought or line of dialog stands out, either, and the whole thing’s over before you know it. As with all the DC books this month, the big question is “Will readers want to come back for more?”, and by that standard this is a total coin flip.

With 40 years of experience in comic reading, collecting and reviewing, English Professor Phil Mateer has an encyclopedic mind for comics. Feel free to ask Phil about storylines, characters, artists or for that matter, any comic book trivia. He will post your questions and answers on the AABC blog. His knowledge is unparalleled! He is also our warehouse manager, so if you are looking for that hard to find comic book, ask Phil!
View all posts by Phil →
This entry was posted in New Comics, Reviews and tagged Batman, Beasts of Burden, Birds of Prey, Blue Beetle, Captain Atom, Catwoman, Daredevil, Dark Horse Presents, Deadman, Green Lantern, Iron Man, Legion of Super-Heroes, Nightwing, Red Hood, Simpsons, Supergirl, Treehouse of Horror, Wonder Woman. Bookmark the permalink.