The Latest and (Mostly) Greatest #3 by Dan!

A very nice, very light week arrives at your local comic shop this week, just in time for the schools to be back in session!  Don’t worry, I’ve got an opinion on a fair amount of them.  Also, I’m watching the movie Seven while I write this, so that should lead to an interesting state of mind.  Let’s do this! 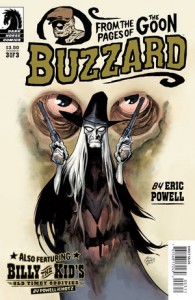 Just a reminder for all of you, Eric Powell is one of (if not The) best writer/artist combinations out in the market today.  If you’re looking for consistently amazing and interesting stories, his material is the place to go.   If you’re looking for fart jokes, his stuff is also the place to go.  Buzzard has been a more straight forward tale of one of the saddest characters from the Goon Universe, and this concluding issue brings things to their inevitable downer of a conclusion.  This whole mini has been much more in the vein of the Goon: Chinatown that came out a couple years ago, and that’s a serious compliment.  Worth it for Goon fans, and people who appreciate a good drama. 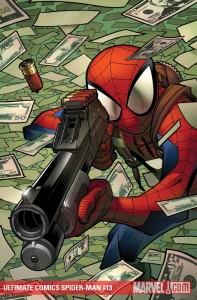 After the mediocre semi-rip-off of the last issue, this latest Ultimate Spider-Man really blew me away.  It just became such an interesting concept revolving around the Chameleon, of all people.  Peter Parker loses a lot this issue; J. Jonah Jameson loses even more, and a little bit more of an explanation about the Chameleon himself create a gripping narrative.  Lafuente still isn’t quite to my taste, but this issue is just too good to worry about that.  The call to arms at the end let’s you know to expect a kick-ass issue out of #14, and this reviewer is ready for it. 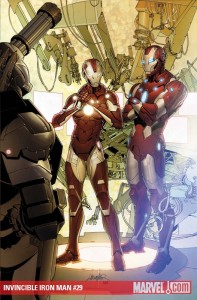 This book has it’s flaws.  The storytelling is either completely stellar or very mediocre.  In this issue, Fraction throws some unexpected twists and ideas about StarkTech and Stark’s friends that will hopefully lead to a fun pay off soon enough.  Larroca uses a crap load of photo referencing for his characters (Sawyer from Lost, Nicole Kidman, Terrence Howard, George W. Bush…) but I could care less.  It’s still really pretty to look at, and I look forward to every issue that comes out.  Again, this is a book that leaves the reader wanting the next one immediately, which from my perspective equals a successful job by the writer and artist. 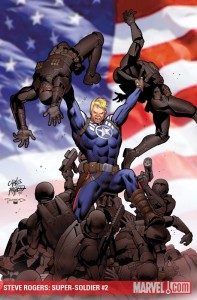 After a long absence, this series it just what the world needs from Steve Rogers on the return.  That Pacheco cover looks doofy, but the inside is just completely fantastic.  As always, Brubaker has a firm grip on the character and uses his current spy/espionage angle to really form an interesting tale.  He also uses a character I’ve never heard of (Machinesmith) to screw with Steve Rogers.  And don’t even get me started on Eaglesham, probably one of the most consistently good artists that Marvel has working right now.  Overall, it’s a fun second issue to a fast moving mini series.  Lots of potential, and lots of action.  Great stuff. 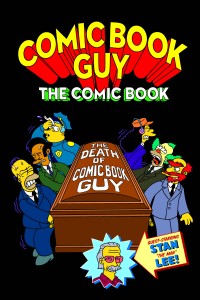 For some reason, this book will not stop amusing the hell out of me.  Stan Lee’s brief cameo where he tried to hype everything he was doing was hilarious.  Marge’s makeover of the comic store worked really well.  Even the Nerds vs. Geeks fight that leads to a stereotypical cosplay joke had me smiling.  This book is a fun poke at all the stereotypes we see (much like the Simpsons was back in it’s prime), and it’s nice to read something that actually makes you want to laugh at its jokes.  Very fun stuff.

Thor The Mighty Avenger #3 Writer: Roger Langridge Artist: Chris Samnee: Still really awesome, and I don’t give it enough credit.  I’m probably going to go back and get the first two of these because really, it’s that good.

Dark Wolverine #89 Writers: Daniel Way & Marjorie Liu Artists: Stephen Segovia & Paco Diaz: Franken-Castle needs to die already, and we get closer every issue.  Not being drawn by Tony Moore hurts this book, but it’s still a doofy and fun read.

Superman #702 Writer: J. Michael Straczynski Artist: Eddy Barrows: I’ve read worse, I’ve read better, but this is still just a huge “meh” for me.  Could not care either way, maybe just because I’m not a real and true Super-fan.

Daytripper #9 (of 10) Writers/Artists: Fabio Moon and Gabriel Ba: The brothers turn in an interesting issue here, leaving me wondering what the hell the end result is going to be.  A fun mini that might work better read as a whole story.  Still so pretentious…

Batgirl #13 Writer: Bryan Q. Miller Artist: Pere Perez: The fact that the Batgirl title is still interesting is a compliment in itself.  This has been a consistenly fun series that hasn’t really let me down at all.

B.P.R.D. Hell On Earth New World #1 (of 5) Writers: Mike Mignola & John Arcudi Artist: Guy Davis: Davis draws the hell out of this like always, and it’s another consistent quality of the Hellboy-Universe books.  Get the trades first, cause this is a huge story!

X-Force Sex & Violence #2 (of 3) Writers: Craig Kyle & Chris Yost Artist: Gabrielle Dell’otto: Still the most accurate title ever.  Leaving nothing to the imagination, this mind-numbing series doesn’t require any thought to enjoy (is that good?).

This title still makes me sad.  It’s got a great team on it, but is stuck in continuity hell working for the Jeph Loeb machine at Hulk.  Things come to a close (I hope) and now maybe Pak can start writing good stuff again instead of being stuck under editorial thumbs.  Don’t even get me started on the child abuse crap here either…

I don’t even know what the say about this.  The Titans Villains for Hire one-shot spun out to this and it hasn’t gotten any better.  Now they’ve thrown the one-armed druggie Arsenal into the mix and hopefully that will make it more “real”.  Not to mention that the scene transitions don’t make any sense, but it’s not like much of anything does in this title.

And that’s it!  All I have left is one question: What’s in the box?! (Remember, cause i’m watching Seven… yeah. Goodnight.)