After Scott Pilgrim blew my mind this weekend, is there anything 40+ year old comics can do to be better?  I’m not sure, but let’s find out! 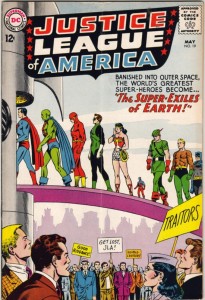 Another team book?  Absolutely.  The 60’s was a time to let the world buy whatever they wanted, but then trick them into getting more!  This issue has a little bit of everything for JLA fans.  We get Snapper Carr, Doctor Destinty and plenty of ridiculous hijinks.  The issue itself was… interesting?  I’m not sure if that’s quite the right word.  Sometimes I honestly had no idea what was going on, but it was pretty fun.  Apparently Green Arrow gets to ride Green Lantern on horseback when he needs transportation (no, seriously).  It was pretty fun stuff, and at the end, they literally erased the whole worlds memory with a substance from the Fortress of Solitude.  Not kidding.  More info can be found HERE.

The Justice League is still around to this day.  With a team that’s constantly changing, it’s hard to stick around for just one character.  Grant Morrison’s JLA is some of the best material, but James Robinson’s current run isn’t bad. 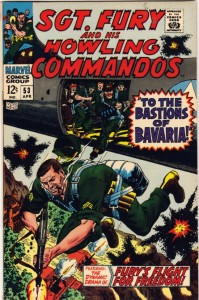 So I’m still not a fan of war comics, but I am such a sucker for Nick Fury.  This issue has it all.  Severin art is probably the most important selling point for this book, but it has so much more to offer in just content.  The commandos are sent into enemy territory to infiltrate a castle and capture the hated Nazi conspirator.  Fury takes down nameless stereotypical henchmen in a staircase, all the commandos have stereotypical accents for the type of people they are (the English guys say “old chap” like 20 times), and in the end is a two-panel Hitler cameo.  The absurdity of this whole story is what makes it really worthwhile, and the alliterations that litter the cover really make it even more worthwhile.  More info can be found HERE.

Sgt Fury eventually moved onto the fantastic Steranko series Nick Fury Agent of SHIELD.  He can now be found in Secret Warriors, one of the best books Marvel is putting out.

This books starts with a bizarre see through creature and Dr. Magnus yelling “The Solar Brain’s taking our rocket apart- in Mid-Space!” and I knew I was in for a treat.  That leads straight into sexism, an interesting beach adventure, then space adventure.  Not to mention the Metal Men’s natural enemy “the gas gang”… This book is all over the place, and it’s just crazy enough to work.  I can’t even begin to explain how this all works out, and I’m still not sure how a Metal Man can cry, but who cares?  It’s borderline ridiculous science fiction that for some strange reason continues to be interesting through the whole thing.  Oh! Also, a robot enters a beauty pageant, while a couple of others die.  Why don’t they make comics like this anymore? More info HERE.

The Metal Men aren’t around nearly as much as they used to be.  Your best bet is either back issues or a copy of the Showcase Presents trade.  They did pop up in Wednesday Comics, the greatest thing most of you didn’t read.