The Latest and (Mostly) Greatest #24 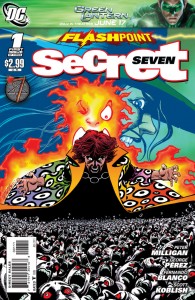 This series is the exact kind of story that these mini series should be.  You draw in the classic people with Pérez art, you draw in the indie crowd with Hellblazer‘s Milligan and what you get is pure F-ing insanity.  There’s so much going on here, and it’s almost completely independent to the Flashpoint series itself.  This is exactly what a tie-in mini-series to a big event should be.  It’s accessible, has strong selling points, and is just a very finely put together comic.  Seriously, if you’re a fan of Shade, Perez, Milligan, or just very nicely put together comics, this is the exact story you need to revitalize. Oh, and did I mention it’s a new #1?  You’ll probably be seeing a lot of those in the next few months… 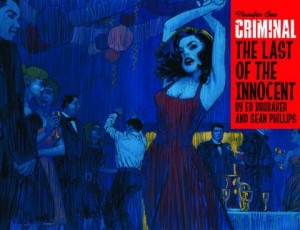 I am a huge fan of when Phillips shows up with a whole new style.  This “not-so-subtle” Archie parallel is basically what makes it so fantastic.  You get the usual grim and gritty style that Phillips is known for, but then the entire story transitions to the cartoony Riverdale-esque story.  It’s a lot like the earlier Criminal, where the Dick Tracy type character was showing up, but this is just beyond crazy.  Criminal is the best noir comic you’re going to find anywhere, and it also may be one of the best of any type of comics available today. 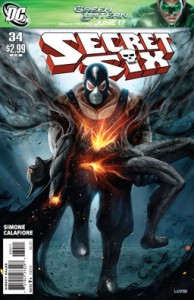 So, this is one of those comics that’s gunna be a problem if it gets re-numbered.  There’s absolutely no reason to do it, but it’s gotta be part of that line.  In the meantime, this book plugs along being the logical cousin to the Suicide Squad from the 1980’s.  Bane’s getting a love interest, or at least an escort (it’s not a hooker until she dies, (did anyone just get my Archer reference…))  and things are patched up among all the other team members after their trip to hell.  Simone has the ability to make you care about some genuinely loathsome people, and that’s what keeps this book going.  Calafiore always puts out consistent art, and I enjoy it, so that’s all that needs to be said. 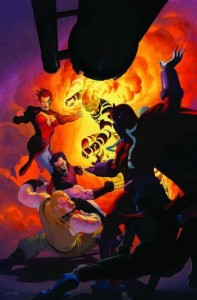 I’ve discussed X-force before, and it’s quality really hasn’t wavered for the 11 issues that have been released.  Now that Tan is off of the art chores, we’ve immediately taken a step in the right direction.  The covert X-team is on a mission to try to get something from Dark Beast home world (aka the Age of Apocalypse).  What does bug me about this is the fact that I thought the AoA world had been completely destroyed and undone.  It’s very unclear why it even still exists.  That’s not enough to derail this comic.  It’s fun and Remender is probably the only person who can write Fantomex and Deadpool and have them both be at least slightly interesting. (And did you know, that a young kid by the name of Rick Remender was a steady weekly customer of AABC back in the 80’s and 90’s??) 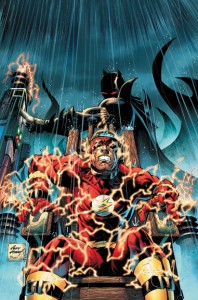 This stupid story is just so intriguing.  I’m a sucker for when a story takes me in directions I don’t expect it to.  That’s why I loved Justice League Generation Lost, that’s why I loved Young Liars, and that’s why I love this series.  In an alternate reality anything can happen, and it’s as if Johns is just going to try absolutely anything.  This issue puts Aquaman, Wonder Woman and Batman all in the places they need to be in, but still advances the plot around Barry Allen.  As opposed to last months issue that felt like much more of a #0 issue, this comic actually gets some plot moving.  Everything is going to come to a head, and at only 5 issues, it should be happening quickly.  We’ll see how I feel come August, but I doubt I’ll be starting this column over at #1…

Batman: Knight of Vengeance #1 Writer: Brian Azzarello Artist: Eduardo Risso: The other good Flashpoint tie-in mini sees and the reunion of the 100 Bullets team.  The other two minis this week were “World of Flashpoint” and “Abin Sur: The Green Lantern”  both fine, but not worth noting.

Fear Itself #3 Writer: Matt Fraction Artist: Stuart Immonen: So THAT’S why the new Cap and Bucky series is going to be set in WWII… This is worth noting for being the main Marvel event, but it angered me with the direction it went.

Heroes for Hire #8 Writers: Dan Abnett and Andy Lanning Artist: Brad Walker: Still not quite good enough to crack the top 5, but I think every time it’s come out I’ve mentioned it, so that’s at least a good thing.

Hulk #34 Writer: Greg Pak Artist: Carlo Pagulayan: Worth looking at for one of the most intense punches I’ve ever seen in a comic.  No seriously, go look at it, I can wait…

Sweet Tooth #22 Writer/Artist: Jeff Lemire: Every time this comic comes out I’m happy, so I’ll keep mentioning it whenever I can.  When they re-number everything, they should let Lemire draw a mainstream superhero. I’d Buy It!

Thunderbolts #158 Writer: Jeff Parker Artist: Kev Walker: This comic is crazy, and that’s a good thing.  Tied into Fear Itself because of the Juggernaut, but he’s gone by the end of the issue.

Weird Worlds #6 Writers/Artists: Various. The three stories come to an end. Kinda.  Two of them lead into the new anthology My Greatest Adventure, and I’m not sure how I feel about that.  Gotta wait til October though…

The Boys #55 Writer: Garth Ennis Artist: John McCrea: McCrea is ruining this comic.  I love him as an artist, but this much talking is just not his strong suit; unfortunate, cuz’ this is still a good series.

Moon Knight #2 Writer: Brian Michael Bendis Artist: Alex Maleev: Still crazy, and no, I have no idea why Bullseye is around. And I don’t know who that person was at the end.  But I’m intrigued so that’s what matters.

S.H.I.E.L.D #1 Writer: Jonathan Hickan Artist: Dustin Weaver: Volume 2, but you wouldn’t know that by looking at it.  Bad marketing and a complicated plot mess this up for the week, but it’s still kinda rad.

After Whedon, this comic went flying off the rails.  So here it is now, a mid-level X-book reminding me of stuff like X-Treme X-Men.  Why does this comic even exist?  I don’t know anymore.  The art is interesting.  Jason Pearson is off, and we have a similar to Art Adams style from Bradshaw.  Definitely doesn’t save it.  Oh, how the mighty have fallen…