All right folks, it’s been a long weekend, the X-men movie was rad, and now I’m reading old stuff.  Let’s do this! 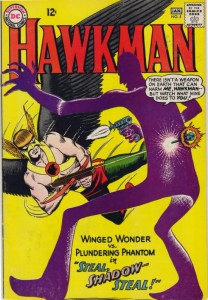 So I completely don’t understand the Shadow Thief.  He’s a guy who steals stuff, but is basically like Kitty Pryde, unable to be touched.  But how does he steal things if he’s only a shadow?  It’s logic like this that makes me smarter than the 60s!  Hawkman is using his bow and arrow to try to shoot the Shadow Thief, and this story is all about finding a way to stop the untouchable villain.  It’s very old school, being a Gardner Fox/ Murphy Anderson joint, so it’s definitely outdated in its writing.  They have an entirely separate section devoted to explaining Shadow Thief’s origin, which is just completely off the wall. He manages to hypnotize both Hawkman and Hawkgirl into thinking they are shadows, and then there’s a really confusing ending, and everything’s back to the way it started.  Gotta love the Silver Age folks.  More info can be found HERE

Hawkman has been rebooted roughly one-bajillion times.  As part of the DC reboot there will be a new series coming in September written by Tony Daniel with art by Philip Tan.  If that’s up your alley, then there you go.  There’s also some back issues written by the like of Geoff Johns, James Robinson, Howard Chaykin and more. 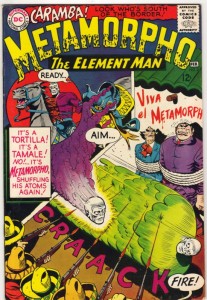 The entire concept of Metamorpho is a strange beast.  It’s drawn really cartoony, but the story tries to be heavy in its “no one will ever love me cause I’m a freak” sort of way.  It also acts like a soap opera, but with comedy.  The Metamorpho comic is just like the character; a little bit of everything.  In this story a random Mexican dude starts trying to win the heart of Sapphire (Metamorpho’s true love, of course). The guy puts her face on Mount Rushmore (no joke).  This guy’s name is legitimately Cha-Cha.  There’s no real bad guy her per se, but Metamorpho’s trip to Mexico with the entire gang leads to bullfighting and discovering Cha-Cha isn’t quite what he seems.  It’s the kind of no real consequence story that’s completely accessible to anyone, and a lot of fun.  More info can be found HERE

Metamorpho has been all over the place, but never really caught on.  There was a “year one” min-series from a couple years ago, and he also appeared in the latest version of the Outsiders.  If that gets rebooted, he may show up again, or I wouldn’t be surprised if he showed up in one of the anthologies. My Greatest Adventure maybe? 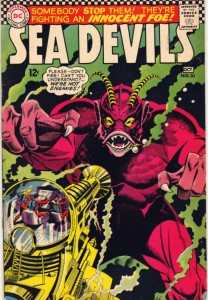 Let’s start from the top.  A title like Sea Devils made it 31 issues.  Actually 35!  Gotta love the old school commitment to a concept.  My only problem is, I’m not entirely sure what this concept is.  Is it just a group of deep-sea divers who have their missions?  Is it a group that just like working with sea life?  I don’t exactly get the point.  But that doesn’t mean it’s a bad comic.  In fact, for it’s age, it’s pretty well drawn,  and the whole “fish are flooding into the streets” storyline that it runs with is actually just ludicrous enough to make me laugh.  It’s bizarre, it’s kinda fun, and it’s basically like a poor man’s underwater Challengers of the Unknown.  So if that works for ya’, there ya’ go.  More info can be found HERE

The Sea Devils are literally nowhere.  I can’t think of a single way to find out about them other than buying these actual issues.  There are 35 of them, and that still blows my mind!  I’m sure they’ve probably made random cameos like Cave Carson did in Final Crisis, but nothing I can think of off the top of my head.  Just ask us for back issues, we’ll gladly supply!

And that’s it!  Hope you enjoyed this trip down silver age DC memory lane.  See you folks in two weeks!