The Latest and (Mostly) Greatest #10 By Dan!

Oh holy crap!  We’ve already done ten of these?  Can you believe it? 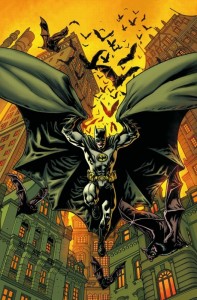 Any comic that starts with the lines “Where are my hands?” and gets replied with “They are in Hell! Waiting for the Rest of you!” really is immediately sold to me.  Let’s be real here folks, you knew I was going to like this.  And dear God did I ever.  It had basically everything I wanted right from the sweet JG Jones cover (not pictured).  It was in your face action with plenty of intrigue, and tons of potential for future issues.  Seriously, after setting a huge trap based around the death of Lord Death Man, the next issue will have Catwoman fighting a giant ass octopus underwater.  We can’t be friends anymore if you don’t like this. 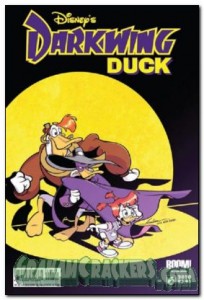 After a solid first arc, the question was, can this team keep up the good work?  The answer is wholeheartedly yes.  It’s clear through Brill’s script that he was once a fan of the entire Disney Afternoon era (Rescue Rangers coming up next!) and he has all the voices of the characters down pat.  Not to mention that he’s tying it into the entire duck world by linking in pieces of Ducktales.  Every cover has an homage to a former Batman issue, and I cannot even begin to explain how perfectly tailored to me that is.  Absolutely great stuff! 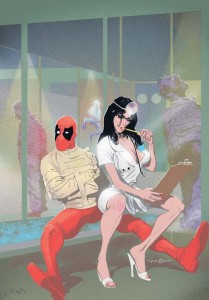 Ok.  This is just some crazy s#!t.  In case you guys are wondering, the crazy doesn’t let up any more in this issue.  David Lapham hasn’t even remotely lost his touch when it comes to grossing you out with the strangest things, and Deadpool is the ideal character for him.  I think I’ve already talked about how I don’t really like Baker’s transition in art style, but it really works for me here.  The crazy (not all the people are really in their settings) style that he has picked up works perfectly for this book.  It also has it’s fair share of swear words earning a MAX tag.  Gotta love them swear words! 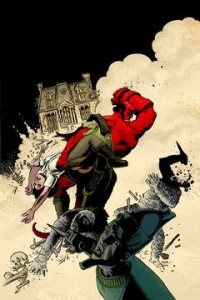 Have I ever mentioned how stupidly hooked on Corben’s art I am?  Cause it’s pretty bad.  I always know I can trust one-shots like this because it will be the best mix of writer and artist that we can get.  Mignola’s work on Hellboy is already well known as it is, but when he works with Corben, it’s like he steps up the quality.  I believe that if the Hellboy stories ever end, the Corben issues (one-shots and a couple minis) will be considered the best of the bunch.  Gotta love the wild crushed- by- gold story and the ancient Egyptian crazy person.  Worth it, oh so very, very worth it. 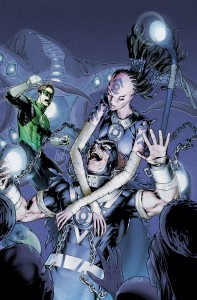 You guys ever get tired of me saying the same things about the same comics over and over again?  Cause I try to get some variety going here, but there’s only so many awesome comics per week!  This, as always, is one of them.  Mahnke delivers stellar art on top of Johns’ superb story.  I can guarantee that this will be one of the best books on the market as long as this team stays together.  Johns is putting together a whole new story that will lead into an event that I personally can’t wait for.  He’s still managing all the colors very well.  Seriously, go get the trades.  Completely recommended.

Batman The Return Writer: Grant Morrison Artist: David Finch: So close, yet so far.  I can’t even explain how much I don’t like Finch’s art, but that’s what brought it all down.  Still worth reading.

Hellblazer #273 Writer: Peter Milligan Artist: Giuseppe Camuncoli and Simon Bisley: Still sweet as hell, but there’s only so much I can say about it.  The Milligan stuff has been some of the best in a long time for Constantine.

Thunderbolts #150 Writer: Jeff Parker Artist: Kev Walker: they always find a way to anger me.  A great story for half the book, then some info pages, and a reprint of the first issue.  Not cool in content if you’re charging me five bucks.  Not Cool.

Superman/Batman #78 Writer: Joe & Jack Kelly Artist: Ed Benes: A pretty sweet first story that actually had me laughing about the whole competition.  Kinda killed by the back-up story, but worth it if you’ve got the 3 dollars to spare.

Avengers #7 Writer: Brian Bendis Artist: John Romita Jr.: Cool, but kinda losing me.  I hate how much Bendis uses the Hood, but having him punch Red Hulk and using the Infinty Gems was very interesting…

Green Lantern Corps #54 Writer: Tony Bedard Artist: Tyler Kirkham: Much better than it deserves to be.  Especially cause Kirkham isn’t that good… Sorry, but it’s the truth.

Batman #704 Writer/Artist: Tony Daniel: Hmm… New direction, but still feels like the same old.  Do something to completely wow me and I’m sold, but right now? Meh.

Osborn #1 Writer: Kelly Sue Deconnick Artist: Emma Rios: Speaking of Meh, a series following up on how little I care about the end of Siege.  Jamie McKelvie does back-up art, and he’s awesome, so support it and keep getting him work!

The Weak of the Weak (Definitely Not the Best, If You Know What I Mean…)

Hey Kids! Remember Free comic book day?  Well, that’s where this series started well over three years ago.  Since then it had been a pretty quality, albeit generic, werewolf-as-superhero story.  It officially came to an end this week in a completely unsatisfying lacklustre way.  I understand that Kirkman is super busy working at Image, but this just ended up being a lot of hype with no payoff.  I hope Howard pulls better gigs after this, because he is a solid artist.  I look forward to what he does next, but I am disappointed in where this series went.

Hey Kids! (See a pattern?)  Wanna read a comic about child abuse?  Well here’s your chance!  Aside from the recent developments in the “Straczynski is a schmuck” storyline, this Superman story just hasn’t been any good.  And this is no exception.  It’s a blatant example of mediocrity.  While Superman walks, this story crawls (and I AM proud of that joke, so get over it), and I find myself hoping Straczynski stays away from monthlies for more than 5 years.  Maybe… forever?

And that’s it!  More to come later this weekend, as always.