Now it’s time for me to read some more old stuff and use excessive amounts of exclamation points!!! Let’s! Do! This! 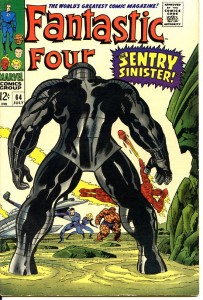 This is a Kirby comic.  There’s no better way to describe what comes from this issue.  A combination of weird blocky robots, the Fantastic Four being fantastic, and the Inhumans lead to an exact representation of what Jack Kirby did for the medium.  It has the main evidence of Kirby’s styles in the huge drawings of machinery, Kirby dots, and big splash pages of action.  Not to mention that it’s a lot of fun.  As with all Stan Lee written comics, there’s a lot of words, but sometimes it’s just nice to analyze the look of the page more than anything else.  More info can be found HERE.

The Fantastic Four are still going strong.  Most recently The Thing has been able to be a human for one week, and there’s a lot of weird stuff going on.  Jonathan Hickman and Steve Epting are crafting an interesting new mythos but it’s all just a throwback to the Lee-Kirby stuff. 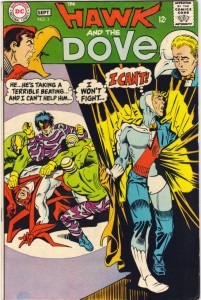 So uh… I was going in not expecting this to be very good, and simply put, it’s not.  Judging purely from this issue, Hawk and Dove were the superhero odd couple in the late 60’s.  Literally just “stop being such a jerk” and “stop being such a sissy” were the crux of all their arguments.  Then they fought some Mod Squad bad guys.  Finally, they argued about being jerks and sissies all over again.  I feel like this couldn’t have been that popular even in it’s time.  The Ditko art is really pretty though, as can be seen in a two page spread right in the middle.  You start to remember how sweet that all was, but then ya’ get disappointed remembering how crazy he went.  Damn you Ayn Rand!  More info can be found HERE.

Hawk and Dove were both dead, but due to Blackest Night, Hawk is alive again.  He’s now working with a girl version of Dove and is one of the sections of Brightest Day.  Also, they have begun appearing in Gail Simone’s Birds of Prey series, on the stands now! 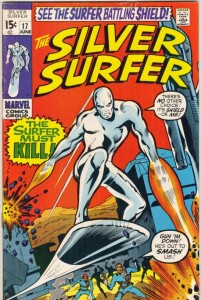 Now I love me some Nick Fury, and Mephisto plots are always worth my time, but cosmic stuff just never seems to work for me.  That’s what made this issue of Silver Surfer so conflicting.  Mephisto convinces Silver Surfer to destroy SHIELD so he won’t kill the Surfer’s love.  Sounds hilarious, could have a lot of potential for fun, but it just doesn’t quite all gel together.  Part of the problem could be that Sal Buscema has very generic art in this issue.  It doesn’t really add anything to it, but all the potential is clearly just lying it wait in the pages.  This is the kinda story that could still be written today, and would probably be a $3.99 mini-series.  I’d be interested in it, if ya’ had the right team.  More info can be found HERE.

Silver Surfer is all over the place, as always.  I believe he’s been involved in all the cosmic Annihilation stuff, and a little bit of that Thanos Imperative stuff, but I can’t be exactly sure.  Feel free to correct me in the comments!

And that’s it folks.  As always, I’ll be back in two weeks for more punishment, I mean enjoyable old comics!