And here’s the good stuff!  Feel free to leave comments about how much you love my taste! 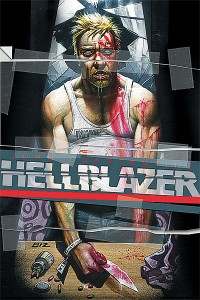 Milligan’s run on Hellblazer is literally getting better by the issue.  He’s digging deeper into the psyche of a broken John Constantine, and that’s creating some of the best Vertigo madness in a long time.  Add in Shade the Changing Man (Which post-Ditko became Milligan’s baby) and this is the perfect book for the fans of the weird.  Add in a mutilated and removed thumb, and you’ve got yourself a book of the week.

This book is shockingly awesome.  I will fully admit that it is stealing the basic idea of “Marvels” by Kurt Busiek, but it’s doing it really, really well.  The Kuberts art is perfect for the Golden Age heroes they are working with, and the Williams back-up is absolutely stunning.  Just take a moment to appreciate what Williams does wherever he goes.  It’s phenomenal.

The greatest Spidey stories in years continues here.  First off, I hate Chris Bachalo.  Now that that’s off my chest, this is some of the greatest stuff I have ever seen him do.  This Lizard story has been terrifying, heartbreaking, and amazing all at the same time.  Then we switch over to the much more moody and realistic Michael Lark who turns in the usual greatness.  Two spectacular issues that go surprsingly well together (even with the stupid shipping schedules…)

This. Was. Awesome.  Completely faithful to the source material, and hilarious in it’s own way, Boom has cranked out another solid kids comic based on Disney property.  Worth getting if you really appreciate Disney afternoon.  Basically amazing.

Worth it just for the twist at the end.  Unlike Wolverine: Origins, which was terrible, Daniel Way really knows how to write a Deadpool comic.  This is probably as good as what I’ve read of the original series, which is really a statement of it’s quality.  You’ve actually left me wondering where the Deadpool comic is going…

I hate to say that this wasn’t exactly Pulido’s best work, but it’s not.  Don’t get me wrong, it’s still amazing to look at, but I’ve come to expect more from him, and this isn’t exactly the greatest he has produced.  It’s still better than the majority of things out there, and is only enhanced by an Amanda Conner cover.  Worth buying just cause it’s so damn pretty…

I should not like this.  It’s overpriced at $3.99, the concept is a little far-fetched, and it has some stupid back-up material.  So why is it on my list?  Cause that story just has so much potential.  Everything about the mystics and their problems works perfectly, and Immonen draws the crap out of it.  Worth reading, and hopefully it grows into something much better.

Oh man.  Things come to a head in this issue (which I feel happens a lot), but the interactions between the characters are so strong, and the excessive violence used so effectively that this is without a doubt one of the best issues of the Boys in a long time.  Not to forget Robertson, who absolutely tears it up in this issue.  If you aren’t worried about offensive material with a little heart, this is perfect.  So good.

This is Real depravity.  Borderline repulsive, and sometimes gross for the sake of gross, Lapham is the logical successor to Ennis’s first Crossed series.  This book is just so over the top and disgusting that’s it worth it to anyone who is a fan of the gross-out horror genre.  Highly recommended to the thick-skinner, and definitely not for the faint of heart.

Other amazing things that you should just go out and buy the trades of, or start collecting already!