Let’s start with DC this week, especially with Action Comics #1000 being one of the most anticipated comics in months: it’s 80 pages for $8 (well, $7.99…), and in addition to the lead story (14 pages written and drawn by Dan Jurgens, who’s finishing his tenure on the book after very capably helming it since its “Rebirth” relaunch) there are a bunch of shorter tales: “Never-Ending Battle,” a tribute to the various Superman styles over the last 80 years, written by Peter Tomasi and with a bunch of pin-up style pages by Patrick Gleason; “The Enemy Within,” with Marv Wolfman writing a story around some unused Curt Swan art; “The Car,” written by Geoff Johns and Richard Donner (who, of course, directed the first two 1970s Superman movies), and with art by Olivier Coipel, involving that car the Man of Steel is lifting on his Action #1 debut; “The Fifth Season,” a coda to the Smallville TV show by Scott Snyder and Rafael Albuquerque; “Of Tomorrow,” by Tom King and Clay Mann, with Kal-El saying good-bye to a dying Earth in the far future (I think DC has a rule right now that every anthology-style comic has to have at least one cool, haunting King story…);  “Five Minutes,” by Louise Simonson and Jerry Ordway;  “Actionland,” by Paul Dini and the great, under-appreciated Jose Luis Garcia-Lopez; “Faster Than a Speeding Bullet,” by Brad Meltzer and John Cassady; and “The Truth,” by incoming Man of Steel and Action writer Brian Michael Bendis, with art by Jim Lee. That’s an absolutely all-star creator lineup, and the result is a souvenir packed with good stories, a fitting tribute to 80 years of the man from Krypton’s adventures. 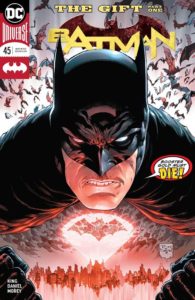 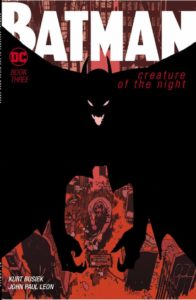 Superman may have the spotlight this week, but Batman’s been DC’s bread-and-butter money-maker for the last decade or more; the five Bat-related comics out this week prove that. Batman #45 continues the run-up to the Bruce 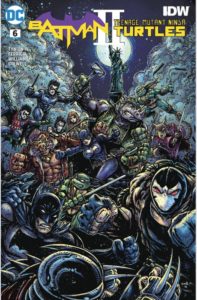 Wayne/Selina Kyle wedding, although that isn’t obvious at first; it starts with one of those patented King wtf? pages, involving an insane Green Lantern, and we gradually become aware that we’re in an altered timeline, thanks to Booster Gold wanting to give Wayne an It’s a Wonderful Life-type wedding present. This isn’t the competent, timestream-guarding Booster of recent continuity, but more the blithering-idiot one of the ’80s bwah-ha-ha Justice League comic; as long as you can get past that, it’s an effective, even chilling first part of a continued story. Creature of the

Night, written by Kurt Busiek, is a mini-series about a version of Batman in the “real” world, where everyone knows him as just a comic-book character; as with Busiek’s similar take on Superman, Secret Identity, it’s a smart, densely-plotted cautionary tale with suitably-shadowy art from John Paul Leon. Batman/Teenage Mutant Ninja Turtles II is exactly what you think it is; this issue offers the conclusion, as Batman, the Turtles and Shredder fight a Bane-led Foot Clan, and if you’re a child of the ’80s it should give you a pleasurable, nostalgic twinge or two, at least. Batman: Sins of the 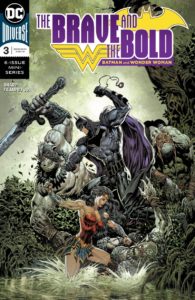 Father is a print version of a digital-first story set in the world of the Batman: The Telltale Series videogames, with Bruce Wayne discovering that his father, Thomas, was more of a bad guy than a good one, and ending up fighting Deadshot, while The Brave and the Bold: Batman and Wonder Woman has those two Justice League super-friends teaming up in an adventure in Tir Na Nog, the Tolkien-like dimension where all of Earth’s supernatural denizens were exiled long ago; that gives Irishman Liam Sharp a chance to show off his lush Old World fantasy style, and Diana and Bruce make a battle- and character-rich combination that’s very hard to screw up. 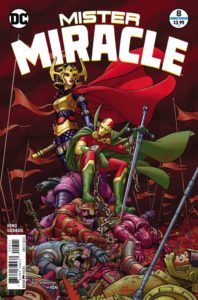 Mister Miracle continues to be one of the best mini-series of the year, as Scott and Barda switch off baby parenting duties with their day jobs, involving apocalyptic battles of the gods; it’s the small, 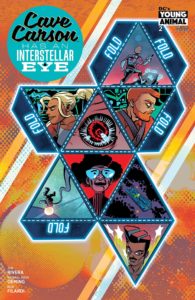 universal parent moments that linger on the memory far longer than the battle ones. There’s also yet another mention of a “battle of the id,” which solidifies my prediction that this is all in Scott’s (and Barda’s) minds as they’re actually in Darkseid’s power — but we have another four issues before we find out, and meanwhile the journey sure is fun. Speaking of “fun,” Cave Carson Has an Interstellar Eye has a lot of it, with Cave and crew stumbling into an outer-space never-ending battle between “Lazer Monks” and chaos-worshipping demons, with rock-and-roll guitars and mind-altering psychic 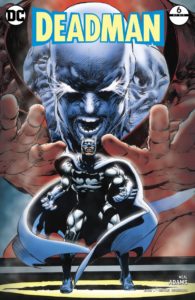 parasites thrown into the mix; Michael Avon Oeming, as always, has just the right pulpy energy to make this weirdness seem natural.  “Weirdness seeming natural” is a good summary of Deadman, too, which concludes its first volume with a couple of character revelations amid a bunch of DC’s supernatural players hanging out in the mystical kingdom of Nanda Parbat and getting lots of backstory about its deity, Rama Kushna; none of this matters, except as an excuse for Neal Adams to draw lots of pretty pictures: there are two splashes and two double-page splashes, one with a dragon that’s worth at least $1.99 of the book’s $3.99 cost by itself. 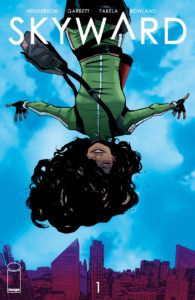 Skyward is a new Image sf story, about what happens when Earth suddenly goes low-gravity, with objects and people floating as though on a space shuttle; if someone or something’s momentum takes them skyward and they don’t 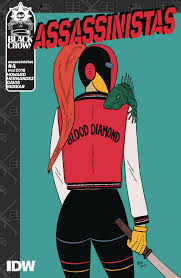 have any way to stop it, they’ll float up out of the atmosphere and die (how the atmosphere itself stays around isn’t explained).  After a prologue showing the day it happens, the story flips to 20 years later, with younger kids, having grown up in that environment, flitting all over the place, while their elders stay inside and worry. The main character’s father thinks he knows how to fix the gravity “problem” — but now that people have adjusted, should he? Lee Garbett’s art is good at communicating the joy of almost-flying, and his attractive people and cityscapes, plus Joe Henderson’s 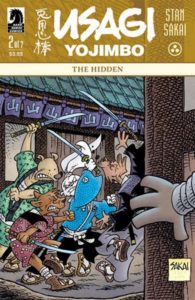 character-rich, intriguing-premise script, make this worth a look.  Assassinistas, as always, is worth buying because Gilbert Hernandez, and Usagi Yojimbo because Stan Sakai; the former has guns, bickering women assassins, land mines and little kids, while the latter is the second chapter of a mini-series about Usagi and Inspector Ishida investigating a murder involving furtive, outlawed Christians in feudal Japan. While their styles are different, Hernandez and Sakai are two old masters, among the best creators in the comics world for many decades now, and any student of the form should be checking out, and admiring, pretty much anything they do. 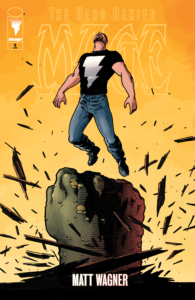 Kick-Ass continues its new incarnation, with the title character a single mom, freshly back from military service in Afghanistan and putting on the costume to play Robin Hood, robbing drug dealers and mobsters and giving most of the money to worthy causes; in this issue, she runs into a harder-edged, more-worthy adversary than she’s used to, and pays the price. I could watch John Romita Jr. draw stuff like this all day, and 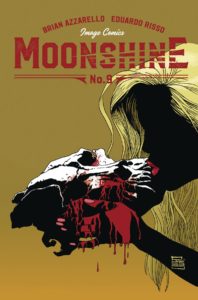 Mark Millar knows exactly how to write crowd-pleasing scenes that play to his strengths.  Mage continues the final volume of Matt Wagner’s life-spanning trilogy, and now that it’s just past the halfway point the action has ramped up, with the main character’s wife and son kidnapped by the bad guys, and him facing a huge, formidable foe while trying to protect his young daughter; it’s not a bad check-it-out issue, just to see if you like Wagner’s clear, energetic and smartly-considered storytelling. Moonshine is at the later stage of its story where all of the principles — the 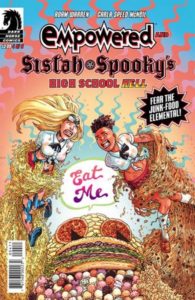 mobsters and their guns, the hill people and their werewolf blood — are circling and gaming each other, all over the 1920s hootch of the title, plus even older incentives like revenge; Eduardo Risso seems very happy drawing gangsters, convicts, hillbillies and pretty girls, and we should be too. Empowered continues its mini-series about Emp and her frenemy forced to relive their high-school days in hell, where routine obstacles like the lunchroom and mean girls with perfect hair become deathtraps; the combination of Adam Warren’s scripting and Carla Speed McNeill’s art make this a fast, funny and furious meditation on the everyday horror of those teen years. 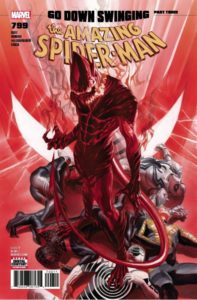 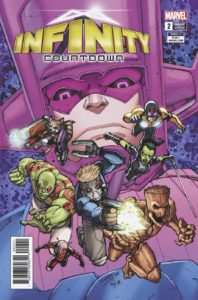 Amazing Spider-Man speeds towards the climax of its current arc — and of writer Dan Slott’s seven-year run on the title — as the Carnage symbiote/Norman Osborn combo now called the Red Goblin (and, even if you think that’s stupid, the Alex Ross cover featuring him up to the 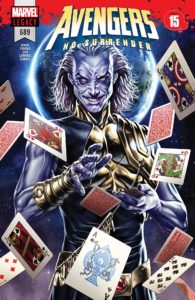 left there is awfully cool-looking…) defeats all comers, setting up the climax in next month’s issue #800.  Infinity Countdown continues its universe-spanning, multi-tiered battle for the various Infinity Stones, with the Guardians of the Galaxy (including a rebooted Groot), the Nova Corps, Warlock and Ultron Prime (among others) all getting their moments in the spotlight; this mini-series has three issues and maybe five spinoffs all still to go over the next few months, so if you like this kind of cosmic slugfest, it’s a decent one.  Avengers reaches the penultimate issue of its own weekly crossover event with duo climaxes, one a

punch-out with the Challenger and another a quiet-but-tense game of Texas hold-’em with the Grandmaster.  There’s also a two-page editorial section where Waid, Ewing and Zub, the writing team, talk about their favorite moments of the team-up, as do the various artists; it’s a nice behind-the-scenes bonus, as we wait another week to see what kind of team — both for the heroes and for their creators — will rise up out of the wreckage in next week’s finale/coda. Daredevil saw the mayor of New York, Wilson Fisk (i.e., the Kingpin — and Marvel New Yorkers certainly have strange political tastes, 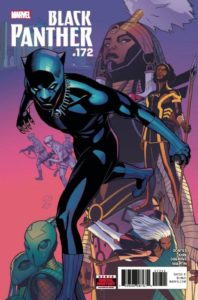 having voted J. Jonah Jameson into that slot a couple of years ago…) shot full of arrows by the Hand in the title’s 600th issue last time;  now, it pivots to the deputy mayor, Matt Murdock, taking over — the kind of unexpected but intriguing development that writer Charles Soule is so good at. Black Panther actually does end its current story this week, and let’s just say that fans of the Panther/Storm relationship (T’choro? Or’challa?) will be pleased; the next volume will involve the Panther in space, which sounds like it could be either great or stupid; Coates has grown noticeably as a writer since he relaunched the Panther a few years ago, however, so let’s hope for the former: the Panther’s generating as much interest as he ever has, so a break from Wakanda sounds like an interesting diversion.

With 40 years of experience in comic reading, collecting and reviewing, English Professor Phil Mateer has an encyclopedic mind for comics. Feel free to ask Phil about storylines, characters, artists or for that matter, any comic book trivia. He will post your questions and answers on the AABC blog. His knowledge is unparalleled! He is also our warehouse manager, so if you are looking for that hard to find comic book, ask Phil!
View all posts by Phil →
This entry was posted in New Comics, Reviews and tagged Action Comics, Assassinistas, Avengers, Batman, Black Panther, Cave Carson, Daredevil, Deadman, Empowered, Infinity Countdown, Kick Ass, Mage, Mister Miracle, Moonshine, Skyward, Spider-man, Superman, Usagi Yojimbo, Wonder Woman. Bookmark the permalink.