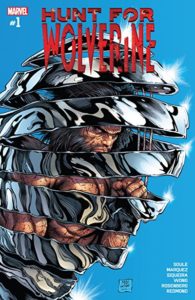 Hunt for Wolverine is one of those surprised-that-it’s-good books; it’s the intro to four different mini-series that continue the story through August, followed by a wrap-up, so it could have been just a naked cash-grab, but instead it’s a decent old-school X-Men tale with Storm, Colossus, Nightcrawler and Kitty fighting the Reavers over Logan’s adamantium-covered corpse, with a couple of twists, and plenty of backstory, to catch us up to the point where everybody realizes he isn’t, you know, there.  That leads to a Silver 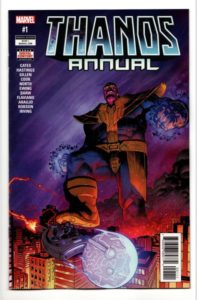 Age Justice-League-style split-up of X-Men and their super-friends into mini-series teams: Iron Man, Spider-Man, Jessica Jones and Luke Cage into The Adamantium Agenda; Daredevil in Weapon Lost; Sabertooth, Laura and Daken in Claws of a Killer; and Psylocke, Storm, Domino, Rogue and Jubilee in Mystery in Madripoor. If you don’t want to get that involved, buy this and the wrap-up and you’ll probably have all the important stuff — although a couple of those mini-series look interesting…. Thanos Annual, of course, is capitalizing on that small, low-budget indy film starring the Avengers that opens this week; it’s got a framing story from Donny Cates, who’s kick-started the purple Titan’s own series into being a fan favorite, with narration from the Cosmic Ghost Rider that he’s made the breakout character of that book (in fact, the ending is a segue into the first issue of that 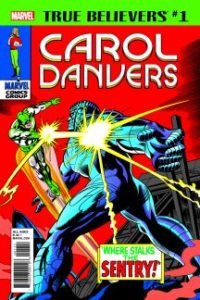 character’s new series), and then an anthology of short Thanos tales, each using a different style and genre to show him as implacably evil; the best is the last, by Al Ewing and with wonderfully-colored, sometimes stunning painted art from Frazer Irving, about an alien race whose afterlife he screws up, just because he can. True Believers: Carol Danvers reprints Marvel Super-Heroes #13, the second Captain Marvel and the first appearance of that now-she’s-Captain Marvel character; as a first appearance, it’s a dud (she only appears for a page or two, as a supporting character/tangential love interest), but as a late-’60s example of Roy Thomas soap-opera superhero scripting and Gene Colan art, it’s a bargain at one dollar. 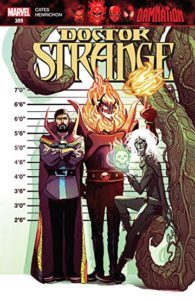 Marvel offers conclusions to three different longer-form tales this week;  Thor #706 is the true finale to the Jane-Foster-as-Thor story; no spoilers, but Jason Aaron and Russell Dauterman, who’ve been telling it expertly for years now, bring it to a perfect conclusion, and their heartfelt essays on the letters page add just the right icing to the cake.  The Doctor Strange: Damnation arc, which has involved the resurrection of the Marvel universe Las Vegas, now ruled as 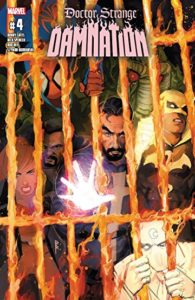 a hell-on-Earth by Mephisto, finishes with “concurrent issues” of both the mini-series and the regular Doctor Strange book — meaning it doesn’t matter what order you read them in, although both have effective codas, with the Damnation finale setting up a Midnight Sons-type special-ops force with some interesting potential character choices, and Doc’s own book ending with a hopeful phone call (one that, as per the next-issue cover on the last page, seems to have been successful); the story itself ends satisfactorily, in a kick-the-devil’s-butt kind of way, and 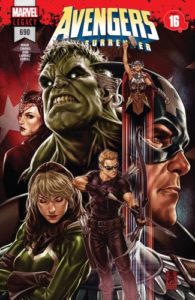 four issues for this seemed just about right.  Avengers ends its weekly 16-part stolen-Earth story with everything back in place, another mansion-cleanup-and-rebuild, and characters shuffled to relaunch the title and spin off both a Quicksilver mini-series and a Hulk ongoing; expect to see more weekly-event longer-form stories like this, given its decent sales; the relaunch lineup involves… well, check the cover preview at the end of the book, and you’ll see: an eight-character mix with three founding members and five logical others, mostly heavy hitters, with script by Jason Aaron and art by Ed McGuinness: a hopeful sign for the title’s future stability and popularity. 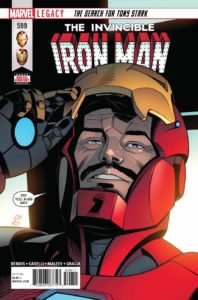 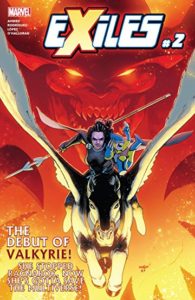 with revelations and twists (including the introduction of a character that fans of Jonathan Hickman’s S.H.I.E.L.D. series will appreciate), and each member of the supporting cast getting a little time in the spotlight, to go along with the scenes with actual Tony Stark. Exiles‘s second issue completes most of the “getting the band together” preliminaries, adding an Asgardian Valkyrie to the mix (I just noticed that the older, crankier Kamala Khan character, with her facial scar and 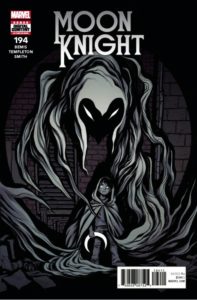 white hair, looks uncannily like Grimjack… hey, let’s get Timothy Truman to draw this book!) only to then blow the band apart; like the first issue, it’s fast-moving and clever, an enthusiastic and energetic follow-up to writer Saladin Ahmed’s previous Black Bolt series. Moon Knight does an origin of sorts, looking at the childhood trauma that helped splinter Mark Spector’s psyche; credit Max Bemis for going in a different, and even more chilling, direction than you might expect, all while setting up the past as prologue to future plots, and credit Ty Templeton, who’s more known for cartoony comedy, with showing a knack for horror, too. 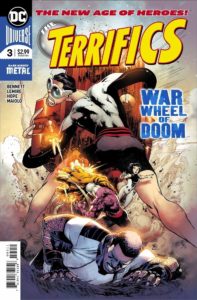 The Terrifics isn’t groundbreaking or impressionistic or, really, unusual at all: it’s just a straight-ahead, well-done superhero comic, with Jeff Lemire putting together a team of misfits that’s a funhouse-mirror version of the Fantastic Four (stretchy guy, smart guy, invisibility girl and tragically-altered powerful guy), with solid, competent art from journeyman Joe Bennett. It’s been fun watching the quartet, stuck together and bickering about it, get used to one another and to how their powers combine, and the Tom Strong/Wildstorm connection is a good plot-driver; it’s got me hooked enough to keep coming back for future issues.  Doom Patrol would be a great 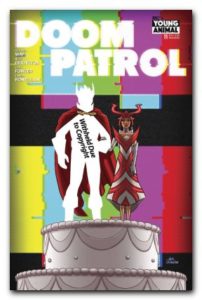 comic, but its lateness has hurt — it’s just now getting to the point of the “Milk Wars” crossover that actually came out two months ago (at the end, instead of driving readers to the floppy issues, barely still on the stands, they’re directing them to pick up the trade collection that comes out in June). That’s too bad, because on its own it’s a deft combination of the surreal and the linear, with pointed parodies of superhero corporate culture and surprisingly-earnest themes about family and the importance of relationships (you can tell Gerard Way has a big Grant Morrison influence); we’ll just have to get out all those already-published issues, put this one in sequence, and read them in the right order to appreciate it more fully. Kill or Be Killed is racing to its conclusion, with many

twists along the way; it’s still not clear whether its vigilante has actually been spurred by a literal demon, or just his own personal mental ones, but that’s part of the fun (and, with Brubaker and Phillips, it could go either way; they’ve done lots of realistic noir crime, but then their Fatale combined that genre with the supernatural too, so there’s precedent…), and this is nothing if not high-quality, very smoothly-told entertainment.  Saga, of course, has had the market on that cornered for the last five years: every issue has a couple of

major plot twists or startling full-page splashes or, in this case, poignant death scenes, and Fiona Staples’s art sells every one; her ability to take the most alien characters and draw them with understandable, easy-to-read emotions makes her one of the best sf artists in the business. Redneck shows relative newcomer Donny Cates’s ability to do the same thing: it ends its second arc this week, and every issue so far has had some sort of revelation or quiet character bit that tells us more about its put-upon clan of Texas vampires, and expands their world — even while it’s 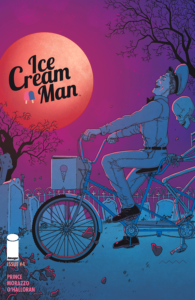 offering crowd-pleasing, pyrotechnic vampire/cop/vampire/religious fanatic battles and shotgun gore too; you can see why Marvel snapped him up and got him on to books like Thanos and Doctor Strange. Strangers in Paradise continues Terry Moore’s new mini-series sequel to his cult-classic ’90s comic; he’s also forming a Moore-verse by integrating it with, this issue, the cast of Rachel Rising, having already name-checked his earlier Echo (I’m waiting for the giant fantasy gorilla from Motor Girl to show up…). Not that much happens this issue — Kachoo gets off a snowy cliff, and there’s a lot of inching

the plot forward on various fronts — but it’s just as well-told and well-drawn as always, a reminder of Moore’s place near the top of any pantheon of current comics writer/artists. Ice Cream Man, behind a beautiful, subtle horror cover from regular artist Morazzo (check it out, over to the left there…) , looks at another family in the small town stalked by its supernatural title character, covering themes of child abandonment and the responsibilities of fatherhood; the last few pages do some worldbuilding, by introducing a rival who scares the normally-unflappable ICM, and hinting at a larger plot. I think I prefer characters like that to be unknowable; giving them origins and clear motivations often ends in disappointment, because what 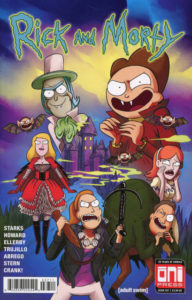 the reader imagines is never as good as what the writer comes up with (see: Lost and Twin Peaks), but I’m willing to be proved wrong here, and I’m definitely still reading this. So too for Lumberjanes and Rick and Morty; they’re both cartoon books that involve fantasy settings, but otherwise are diametrically opposed, with Lumberjanes a heartwarming series about the virtues of friendship and diversity, and Rick and Morty a cynical, blood-soaked slapstick comedy/drama. Both are good, though, and their numbers tell the story: Lumberjanes‘s next issue will be #50, an astonishing run for such a quirky book, while Rick and Morty is up to issue #37, meaning it’s now told more stories than the TV series it’s based on: proof of both comics’s cult status, and of their storytelling quality.

With 40 years of experience in comic reading, collecting and reviewing, English Professor Phil Mateer has an encyclopedic mind for comics. Feel free to ask Phil about storylines, characters, artists or for that matter, any comic book trivia. He will post your questions and answers on the AABC blog. His knowledge is unparalleled! He is also our warehouse manager, so if you are looking for that hard to find comic book, ask Phil!
View all posts by Phil →
This entry was posted in New Comics, Reviews and tagged Avengers, Doctor Strange, Doom Patrol, Exiles, Ice Cream Man, Iron Man, Kill or be Killed, Lumberjanes, Moon Knight, Redneck, Rick and Morty, Saga, Strangers in Paradise, Thanos, The Terrifics, Thor, Wolverine. Bookmark the permalink.