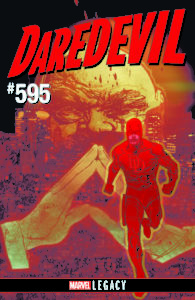 These are what you might call the mainstream Marvels of the week: three starting their legacy renumbering, and the 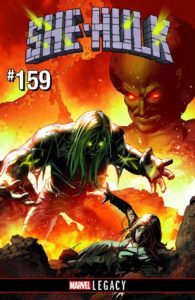 fourth a ’90s revival that, presumably, didn’t reach enough issues in its first incarnation to warrant the higher number now. Daredevil starts an arc with the Kingpin having been elected mayor of New York (the analogy with any current, real-world politicians who are corrupt businessmen/crooks who fooled a gullible electorate into voting for them are made reasonably clear…), and of course now using his powers of office to harass costumed vigilantes, particularly the Man Without Fear. It’s a decent, game-changing start to the relaunch (providing they don’t drag it out past a trade collection’s worth of stories), with Landini providing shadowy, noirish art that’s appropriate to the street-level grit of the book, and it’s just the jumping-on point to attract new and lapsed readers that Marvel was aiming for. She-Hulk goes back to its distaff nomenclature with the return of a classic Hulk villain, the

Leader (not a spoiler, since he’s right there on the cover), although a lot of this first chapter is showing Jen’s current life, and setting up a cliffhanger ending; there’s no actual She-Hulk (Tamaki, who’s been writing the character for a year or two, is stingy about her now rage-fueled alter ego’s appearances, although the establishment of Jen’s civilian relationships and setting first isn’t a bad tactic), but this book, too, does its job of giving curious readers enough to come back for another installment. Moon Knight begins its own revival as a horror book; the main character only appears in dreams and flashbacks, because this first issue is all about the origin of a formidable new antagonist. Jacen Burrows, who drew Garth Ennis’s Crossed for a long time, is very good at matter-of-factly showing terrible things, and the new bad guy is suitably horrific; this is much different than Jeff Lemire’s previous

psychological/mystical take on the title character, but it’s a logical direction for the comic, and one that looks good so far. Spirits of Vengeance, two issues in, is establishing a war between Heaven and Hell, and its supernatural team — Daimon Hellstrom, his infernal sibling Satana, Blade and the Johnny Blaze Ghost Rider — is still gathering its members to figure out what to do about it. If you liked the ’90s version of this book, you should like this one too; Gischler’s good at introducing the characters and establishing their personalities and relationships, and Baldeon, the artist, does a good job on a couple of dramatic, demonic money shots, especially one right at the end; this is another book that’s good at offering enough entertainment and action to bring its readers back for more. 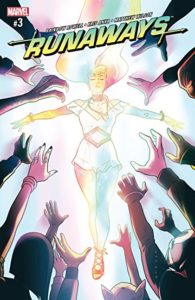 None of these are Legacy Marvels, and they definitely have a more modern sensibility:  they all have female leads, find ways to break out of the standard superhero stuff in both story and art, and are friendly to new (and, often,

younger) readers. Runaways has been striking a nice balance between acknowledging the group’s past (they’re older teenagers now, almost adults, instead of the 14- and 15-year-olds they were in the original book’s run) and trying to keep what worked in the Brian K. Vaughan and Joss Whedon versions — the camaraderie, the humor and the relationship drama. The characters themselves mention that they’re still in the middle of “getting the band back together,” and for now it’s like we’re checking in on old friends after a long absence, and still getting caught up.  Kris Anka has a clear, facial-expression-friendly style that reminds me a little of Jamie McKelvie’s, so that buys them a little more time, but there’s going to need to be some action and teamwork in service to an actual plot soon; fortunately, the book’s ending suggests that they’re about to head in that direction.  Jessica Jones sees that Marvel media star in the middle of an arc with her nemesis, the Purple Man, and it’s as good as this book always is. Appreciate this story now, 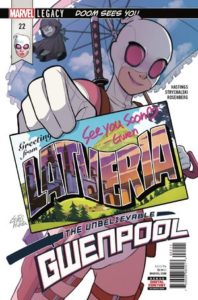 because after this week’s announcement that author Brian Michael Bendis is moving to an exclusive job with DC comics, we won’t have many more of his Jessica adventures to read, and it’s hard to see anyone but her creator writing her effectively.  The Unbelievable Gwenpool continues its reinvention, as the lead character, now that she’s discovered how to use her knowledge that she’s in a comic book to do things like step outside the panel borders, dip in and out of reality, time travel, etc., has become much more powerful, and thus much more interesting. She’s decided to use her powers to take out Doctor Doom (she sees his current rehabilitation as just a normal comic-book gimmick, not meant to last), and it’s a twisty, imaginative tale that reminds me of the classic Walt Simonson Fantastic Four where Reed Richards and Doom battled with portable time-shifters, ping-ponging in and out of the book’s pages and panels. Squirrel Girl, also always imaginative in its approach, offers the conceit that this issue is a benefit comic from within the Marvel universe, set to raise 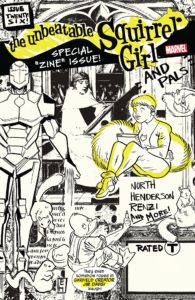 money for a library damaged by the latest NYC super-villain attack and with short comic-strip offerings from Squirrel Girl friends like Kraven the Hunter, Howard the Duck, Loki and Galactus; the actual creators are regular writer Ryan North (and, for the Howard story, Erica Henderson) with art by, among others, Chip Zdarsky, Carla Speed McNeil, Rico Renzi, Michael Cho, Anders Nilsen, and, on the Galactus story, Garfield creator Jim Davis (no, I don’t know how he got in there either, but Squirrel Girl is one of those comics that other creators, knowing the talent and work that go into every issue, really appreciate, and it has a number of high-profile fans in high places…). 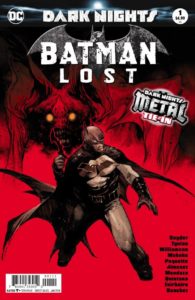 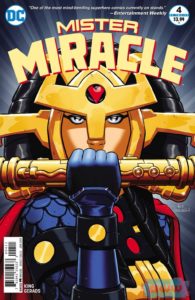 The Dark Nights: Metal tie-in this week involves Batman himself (instead of one of his dark-universe alternate versions), as he tries to escape from mental captivity; lots of mind games, some origins and motivations for the bad guys, and some decent art, especially by the always-dependable Doug Mahnke, so if you’re reading the Metal mini-series it’s a significant puzzle piece.  Detective Comics sees the end of the arc involving the return of Tim Drake: two of him, in fact, counting the future-version, dressed in a Batman costume, who’s claiming that he has to kill 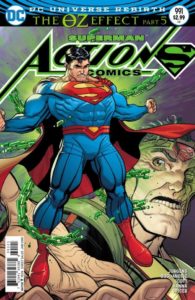 Batwoman or everything will go very bad very quickly. Mister Miracle features a cover blurb from Entertainment Weekly calling it “one of the most mind-bending superhero comics currently on stands,” and I can’t add much to that, except that Tom King and Mitch Gerads continue to use the nine-panel Watchmen grid to great effect; I have no idea what’s actually going on in this comic, and I love it anyway. Action ends its current arc, revealing the mysterious “Mr. Oz” to be, apparently, Superman’s father Jor-El; as you might have guessed, it doesn’t so much end as stop, with a couple of hints about the

mysterious force behind the scenes and a stage set to transition into the actual DC/Watchmen crossover, The Doomsday Clock, in just a week or two. Harley Quinn is approaching its own ending, as its writing team, Connor and Palmiotti, will be leaving in another couple of issues; before they go, they’re making ready to put all the toys back in the box, which means shaking up Harley’s life (none of the current supporting cast is safe, as a major death in this issue shows), and clearing the decks for the next creative crew. It’s been a smart, engaging, extended run, one that the next group will be hard-pressed to duplicate, so enjoy these last few stories while you can. 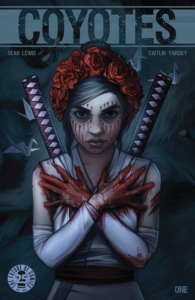 Coyotes is about women in a US/Mexican border town trying to defend themselves against a pack of supernatural coyotes who keep hunting and killing them; it’s a 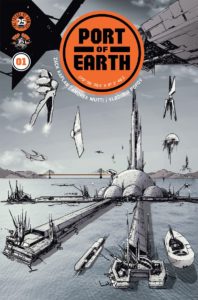 mythological take on the missing-woman crimes that have plagued those border towns in recent years, except with lycanthropes instead of drug-cartel members as the bad guys. It has some elements in common with Pretty Deadly; Lewis’s script has some of the lyricism of Kelly Sue Deconnick, while Yarsky’s art has some of Emma Rios’s dream logic, and knack for both emotional beats and horror. Port of Earth is a hard-sf comic, with our planet having signed a deal with a consortium of aliens to provide a refueling station for the water their ships run on, in exchange for planet-changing energy technology. The consortium is like Chevron, using Earth as a gas station for galactic motorists — who 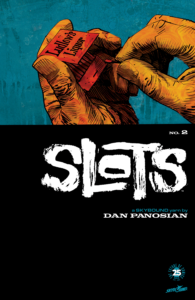 sometimes get out, wander around and cause trouble (the port is 50 miles off the California coast). All this backstory takes up most of the comic’s first issue; it’s really setting up a police procedural about the agency responsible for keeping those aliens — and the earthmen they encounter — from killing each other. Andrea Mutti has the rare ability to draw people, tech and aliens equally well, and, assuming the second issue has more actual story than world-building, it should be another decent entry in Image Comics’s long line of creator-owned science-fiction books.  Slots is a Las Vegas-set book about a boxer, a rogue who left town a decade ago under a cloud of ruined friendships and fight-throwing, who’s back to help an old friend, and confound an old 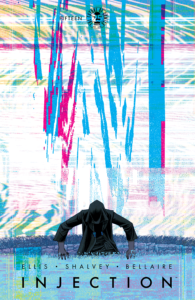 enemy. The art’s reminiscent of Xenozoic Tales, because Panosian has some of Mark Shultz’s ability to draw tough brawlers and drop-dead gorgeous women (they’re both influenced by Frank Frazetta), and the charming-bad-boy-trying-to-reform plot has enough juice to keep the readers’ interest. Injection hits a climax, as some very bad (and mostly unseen, except for their hands) creatures get out of a mystical, Stonehenge-like gate in rural England and start to lay waste to the countryside; it’s vintage Warren Ellis — as are the two kick-ass, competent women who fight it — and he gives artist Declan Shalvey a lot of action, and horrific violence, to keep both him and the readers entertained.

With 40 years of experience in comic reading, collecting and reviewing, English Professor Phil Mateer has an encyclopedic mind for comics. Feel free to ask Phil about storylines, characters, artists or for that matter, any comic book trivia. He will post your questions and answers on the AABC blog. His knowledge is unparalleled! He is also our warehouse manager, so if you are looking for that hard to find comic book, ask Phil!
View all posts by Phil →
This entry was posted in New Comics, Reviews and tagged Batman, Coyotes, Daredevil, Gwenpool, Harley Quinn, Injection, Jessica Jones, Mister Miracle, Moon Knight, Port of Earth, Runaways, She-Hulk, Slots, Spirits of Vengeance, Squirrel Girl, Superman. Bookmark the permalink.