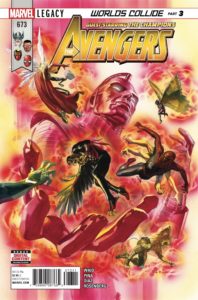 Of the new Legacy renumberings this week, the most-anticipated is Captain America; the Waid/Samnee team has produced a good run on Black Widow, and a great run on Daredevil, over the last decade, and of course Waid had a very well-received run on Cap back in the ’90s. They’re off to an encouraging start here, too — this is the first part of a larger arc, but also works as a self-contained story (a smart, but increasingly rare plot structure these days); it’s inspiring, colorful, good-looking, and even gives its hero a chance to punch a crew of white supremacists, and I think Jack Kirby would have approved heartily.  Avengers, also by Waid, is on the third chapter of its own relaunch arc, a six-part crossover with The Champions, yet another Waid book (he also scripted the new Archie, also out this week 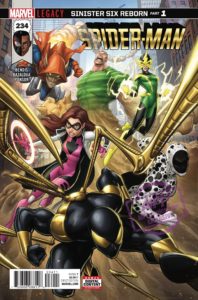 and reviewed near the end of this list); it involves the two teams facing off against the High Evolutionary, who’s speeded up the orbit of Counter-Earth and is threatening to wipe out most of the population of both worlds… for science!  Lots of action and inter-team characterization (including a major life change for Viv, the Vision’s daughter), a typically-smart Waid plot and decent art make this one of the better mainstream superhero books available right now.  Spider-Man #234 (the Miles Morales one; the numbering starts with Bendis’s original Ultimate Spider-Man, launched in 2000, and all its relaunches and variations, until now — and, in fact, he’s written every single one of those 234 issues as one continuity) sees a number of subplots bubbling around a main story 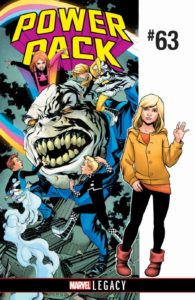 involving the formation of a new Sinister Six (Bombshell, the woman Electro, Hobgoblin, the Spot and the Sandman, along with a guy in an Iron Spider outfit who turns out to be connected to Miles), who are planning an Ocean’s Eleven-type heist; like Avengers, this is a solidly-built example of the high end of Marvel’s current superhero comics, and well worth a look.  Power Pack is quirkier; it’s a one-shot for fans of that fondly-remembered ’80s cult series about four super-powered siblings that was YA before YA was cool.  It’s too bad they couldn’t get original writer Louise Simonson to script it, but Devin Grayson, who’s got a lot of obvious affection for the characters, was a good alternative, and she delivers a story that balances the book’s classic elements with the kids’ current continuity. 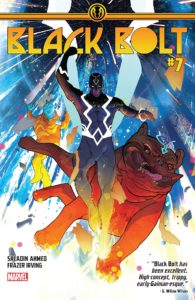 Black Bolt is pretty quirky itself: its first arc separated the ex-leader of the Inhumans from his sprawling supporting cast by throwing him in an inescapable, faraway space dungeon, and he was the better for having to deal with a bunch of adversity and fellow-prisoners while solo and powerless; Saladin Ahmed revealed talents for both characterization and horror, while Christian Ward’s dreamlike art gave the story a dark-hued, glittering authority. Frazer Irving, the guest artist for this transitional issue, has a very similar style, so its tale of Black Bolt’s slow journey home from his adventures has a lot of cool space scenes while it’s wrapping up various loose ends, and deftly setting the stage for the next long story. 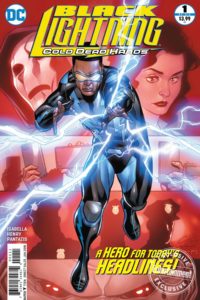 Black Lightning sees the return of that hero’s creator, Tony Isabella, as writer; it’s driven by a new show with the character that’s part of the CW’s Green Arrow-anchored DC universe. Isabella’s ’70s work has a lot of fans (he 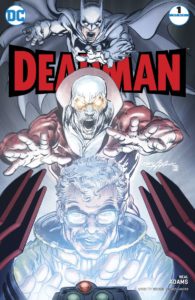 championed diversity in comics when few others did, but didn’t let it get in the way of the stories), and his character-friendly, easy-to-follow plots and clear themes still work well today. Neal Adams’s writing might be called “character-friendly,” too, and Deadman has his usual gorgeous art (and a cool, skeletal glow-in-the-dark cover, just slightly late for Hallowe’en), but no one ever said his plots were “easy to follow”;  this new mini-series guest-stars Batman, is a sequel of sorts to Adams’s 2012 Batman:Odyssey, and has some of the jagged story zig-zags and weird dialect tics of that sometimes-mocked work: but, c’mon, Adams drawing Batman and 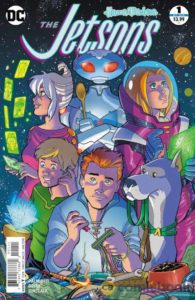 Deadman, his two signature characters when he was making his first big splash in comics fifty years ago, is worth it just for the pretty pictures. The Jetsons, the week’s other DC debut, is, like The Flintstones, a more-realistic take on that ’60s cartoon franchise, with little in common with the original besides the basic character names and relationships; where Flintstones offered surprisingly grown-up social satire fueled by anthropology, The Jetsons, with its future setting, mixes its own social commentary in with science-fiction adventure. Like many of the DC Hanna-Barbara relaunches, it’s not bad on its own terms, but fans expecting the flavor or fun of the original show will be disappointed. 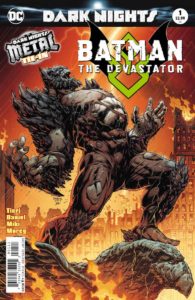 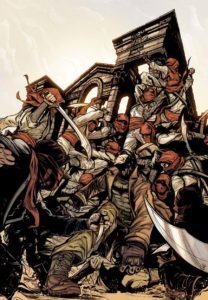 Batman: Devastator is the penultimate one-shot detailing the origins of all those “dark universe” bat-avatars for the Dark Nights: Metal event; it’s the one with the Superman connection, as the Man of Steel of its alternate dimension went all Injustice on the world, and its Batman injected himself with a Doomsday virus to take him down — and, of course, now he wants to do it to “our” Superman, too. Tony Daniel has a very fan-friendly art style for this kind of thing, so all the death and, well, devastation look good, and this fits smoothly into place with its companion books (next week: “The Batman Who Laughs,” the lead bad guy and the final tie-in). Meanwhile, the regular Batman book sees Bruce and Selina, now engaged, traveling to the Middle East to confront ex-girlfriend (and murderous would-be world-dominating queen) Talia, with predictable 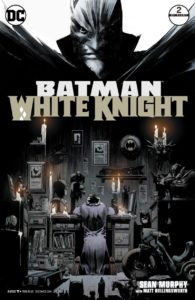 (and predictably entertaining) results. Beautiful art by Joelle Jones, and the usual smart scripting by Tom King, should let this keep its status as the best-selling comic on the stands right now. Batman: White Knight continues Sean Murphy’s mini-series about the Joker, on meds and no longer insane, in a Gotham with an increasingly-violent Batman. Still can’t quite decide if this is an Elseworlds title or in continuity (its treatment of Harley Quinn suggests Elseworlds…), but it’s reasonably good-looking, features a bunch of bat-villains, and offers a seldom-explored angle on the Clown Prince of Crime/Dark Knight relationship. Its seriousness is balanced nicely by Harley and Ivy Meet Betty and Veronica; you wouldn’t think DC and Archie could get a six-issue mini-series out of that concept, but it turns out they can, and it’s pretty good: the two villainesses end up in Riverdale, hiding 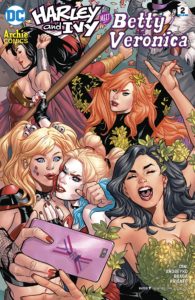 out from heat in Gotham (and because Veronica’s dad is sponsoring a development that will tear up some wetlands, earning him Ivy’s ire), and appear at a big Hallowe’en costume party where, yes, Betty and Veronica come dressed as Harley and Ivy. Zatanna and Sabrina are there too, so magic gets involved, and… well, so far it’s a fun story with some decent action. Laura Braga’s art is good enough, although she has trouble with the unenviable task of distinguishing the “real” H&I and their Riverdale imitators, and while it’s unfair to her, I can’t help wishing that Amanda Connor, whose style would have been perfect for this comic, had had the time to draw it. Still, for fans of both the Gotham Girls and the Riverdale ones, this should be irresistible. 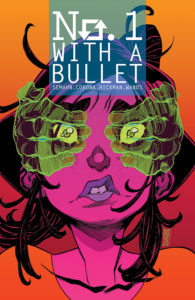 No. 1 With a Bullet #1 is about a young woman who’s an assistant to a Stephen Colbert-like TV star, and so partly famous herself, whose life is turned upside down after she’s 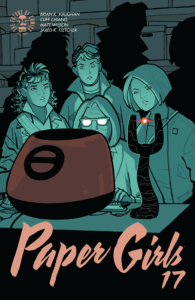 the victim of cyberstalking and fake video footage; it’s got a lot of modern digital-era themes involving hacking, online ethics, leaked personal videos, virtual reality and more — maybe too many — but as very-near-term science fiction, it’s well thought out, and Jorge Corona’s art has some of the knack for caricature, busy pencil lines and appealing loose energy of, say, Sean Murphy; it’s well-built, too, with a cliffhanger ending that ought to bring readers back for the next issue.  In The Gravediggers Union, set on an earth where magic 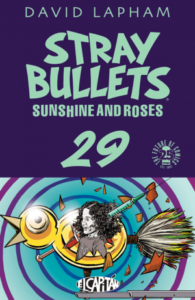 and the supernatural are known about, and real, the title group is the bulwark against the forces of darkness; they’re currently fighting against a big upswing in zombies, vampires and other “bad” magic.  Craig, who’s the artist on Rick Remender’s Deadly Class, isn’t a bad scripter himself — he thinks visually, and contributes a very Mike Mignola-like five-page prehistoric prologue to supplement the modern scenes drawn by Toby Cypress (Omega Men), which are suitably shadowy, and good at the horror aspects; as a Hallowe’en comic, this is more treat than trick.  Paper Girls continues jumping

around in time; they’re in the ’90s, and a bullet-shaped tangerine-colored iMac G3 (identical to one I had…) plays a part in the proceedings, as does some diversity awareness training for one of the girls. Vaughan always finds an artist who’s good at conveying emotion and expression for these deceptively-addictive long-form serials of his, and Chiang is no exception; this ought to be a perennially steady-selling YA trade series. Archie‘s mining that territory now, too, and Mark Waid (remember him, from up above?) mixes soap opera (Betty’s wheelchair-bound, courtesy of a drag race betwen Archie and Reggie), slapstick humor (Archie at a golf 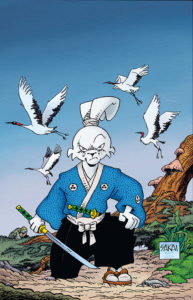 course) and characterization (Jughead doing his Zen master routine in a great scene with Betty’s parents).  Stray Bullets does one of its sideways issues, where it takes a break from the main plot, tracks the history of a new character, puts him through a bunch of (often self-inflicted) grief, and then hooks him back up to the main story; you can always tell when a creator’s a perfect match for his creation, wed to it for life, and Lapham and the Stray Bullets universe qualify here. So too for Usagi Yojimbo; Stan Sakai’s masterwork has the first chapter of a story about a wily street thief, Inspector Ishida and a murderous local gang, and anyone taking a chance on it will find it hard to resist.

With 40 years of experience in comic reading, collecting and reviewing, English Professor Phil Mateer has an encyclopedic mind for comics. Feel free to ask Phil about storylines, characters, artists or for that matter, any comic book trivia. He will post your questions and answers on the AABC blog. His knowledge is unparalleled! He is also our warehouse manager, so if you are looking for that hard to find comic book, ask Phil!
View all posts by Phil →
This entry was posted in New Comics, Reviews and tagged #1 With a Bullet, Archie, Avengers, Batman, Black Bolt, Black Lightning, Captain America, Deadman, Gravediggers Union, Harley Quinn, Jetsons, Paper Girls, Power Pack, Spider-man, Stray Bullets, Usagi Yojimbo. Bookmark the permalink.