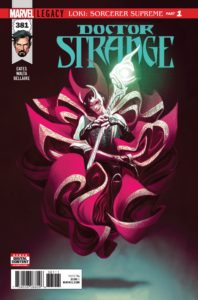 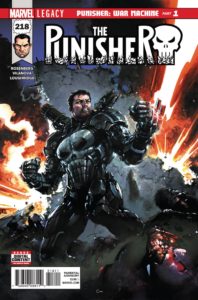 Doctor Strange is the most-anticipatred Legacy relaunch this week; writer Donny Cates made a splash last year with the indy books God Country and Redneck (the latter a Texas-vampire genre romp that got shout-outs from, among others, Entertainment Weekly), got tapped by Marvel, and now gets to play in their super-hero toybox. Wisely, instead of using six issues to effect slow change, he just jumps ahead six months and presents a new status quo: Loki is the Sorcerer Supreme, and Stephen Strange is a doctor again (although to say what kind would be a spoiler). This is, fortunately, the Kieron Gillen (and the Matt Fraction) Loki, part trickster, part storyteller/liar,

genuinely conflicted, and more often than not trying to do the right thing… and if he can work it to his advantage, so much the better. It’s all briskly told, entertaining, and a good start. Punisher sees Frank getting recruited by Nick Fury (Jr.) to solve an international situation involving a formerly-Russian tiny-country despot with an army; to handle that, he gets to break into a former S.H.I.E.L.D. facility and steal the War Machine armor. Fair enough, and the prospect of Frank with all that firepower is fun, although the interior art has him looking disconcertingly like Jon Bernthal, and I miss last volume’s writer Becky Cloonan’s firm grasp on his character. No such problems with Amazing Spider-Man, where Dan Slott’s been chronicling the webspinner  long enough to know exactly how he thinks, and exactly the 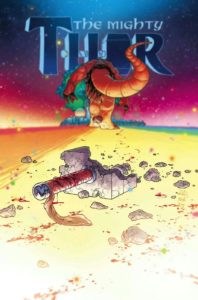 mix of action, subplots and soap opera that will keep readers interested (including a Peter Parker who’s gone from being like Tony Stark to like Neil deGrasse Tyson, a logical-enough new incarnation, and one that leaves him in a good place).  Thor, its anniversary issue out of the way, has James Harren offering a very Jack Kirby-like Mangog versus the War Thor (an Ultimate Universe hammer-transformed Volstagg), in a kinetic, book-length battle that sizzles and pops; like Dan Slott, Jason Aaron’s been tending his little Asgardian patch of the Marvel Universe for quite a while, and knows just how to craft a compelling chapter of his ongoing long-form tale.

Defenders should be very familiar to viewers of the Netflix series, with Diamondback as the big bad guy (he has a confrontation with Hammerhead this issue that highlights

his cut-to-the-chase approach as startling, violent and darkly funny — and Marquez nails the art on it, too); there’s also a couple of pages of introduction by, of all characters, Deadpool, and Bendis shows an affinity for Wade’s dialogue and general snarkiness that makes me sorry he never wrote the mercenary’s comic (and, with last week’s announced move of Bendis to DC as an exclusive writer, probably never will…).  As a chapter of the ongoing arc, it hits a lot of good beats (including a silent, six-page Elektra/Iron Fist fight), and should keep readers satisfied. Hawkeye sees Kate teaming up with the Wolverines (Laura and Gabby, not Logan), who are in town to investigate a 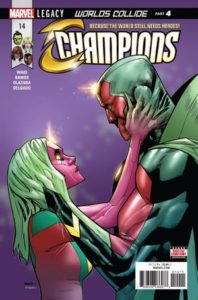 case that overlaps with her own; along with the inevitable action, there’s a lot of Kelly Thompson’s usual decent relationship-building, and it culminates in the return of a character that pretty much every reader of the comic will be happy to see. Champions continues its crossover with Avengers, as the High Evolutionary’s plan to crash Earth and Counter-Earth into each other is a more than adequate extinction-level event for the two groups to battle, and the Vision’s daughter Viv deals with a major life change; as the story races to its climax, the two teams have stopped bickering and started cooperating, and the Waid/Ramos creator combination offers a lot of cool pictures of cool characters doing cool things: the point of a crossover, after all. 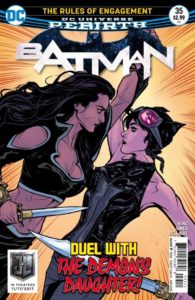 The Dark Nights: The Batman Who Laughs one-shot this week offers the origin of the final bad-guy bat-avatar: from a world where the Joker crossed the line and Bruce Wayne killed him, only to be infected with his insanity, with predictably-devastating results for everybody else. It’s

nastily, violently fun, and Riley Rossmo (who just finished drawing both Batman and the Joker over in the Batman/Shadow mini-series that concluded last month) is able to merge the innocence of much of the cast with the now-literally Dark Knight’s insanity to good effect, all meant to propel us into the next stage of the big story. Meanwhile, over in the regular Batman title, current fiancee Catwoman and former flame Talia al-Ghul have a big sword-fight to resolve their rivalry issues, culminating in a quiet one-panel conversation between Batman and Talia that’s just perfect; Joelle Jones is, like Rossmo, a newer artist who’s come up through the

indy publishers (her Lady Killer got a lot of well-deserved attention) and now, given a ticket to the big leagues, acquits herself admirably. Aquaman hasn’t shown up on this weekly list for years, but Dan Abnett and Stjepan Sejic have made it readable again, with Atlantis now ruled by a corrupt and tyrannical king, and Aquaman exiled and presumed dead. He isn’t, of course, and this episode, as he and Dolphin join the ragtag resistance and the story arc starts to pivot from downfall to uprising, is a great jumping-on point for curious lapsed readers.  Bug! makes it to its penultimate issue, with the Allred family (husband Michael, wife Laura and brother

Lee) continuing their affectionate, fast-moving and jam-packed paean to ’70s DC comics in general, and Jack Kirby ones in particular. The Wild Storm does something of the same for late ’90s/early ’00s Wildstorm comics, with Warren Ellis (the architect of some of the original books, especially The Authority) rebooting and reimagining a power struggle between Stormwatch, an evolving WildC.A.T.S team, and the IO security/spy network; it’s quick-moving, compelling high-stakes (and high-tech) fun, whether or not you’re familiar with the source material, and may be the Wildstorm Universe relaunch that finally takes hold and gives those characters a proper place in the DC publishing world.

Three Image debuts (and one from Boom!Box) this week: Brilliant Trash is about a website reporter who isn’t very good, but gets swept up in a conspiracy involving the end of the world, drugs that give you powers but take years off your life if you use them, and people on both sides after her; it’s got a modern, social-media-savvy script and some engaging, not-too-perfect characters, and by the end there’s the glimmer of a super-group forming, between that and the conspiracy stuff, it’s kind of a cross between the X-Men and Mr. Robot. Dark Fang is about a vampiress whose hypnotic powers work across computer lines, so if you get on her chat room you end up her slave, and send her lots of money; it’s an 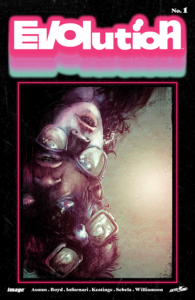 interesting combination of cartoony animation and horror, and the main character’s origin shows her to be feisty and resourceful, along with, you know, a bloodsucking monster, so when something starts to go occultly wrong it’s easy to root for her. Evolution is about people across the planet suddenly manifesting adoptive mutations (an asthmatic kid suddenly gets better, because he’s growing gills that let him process air pollution); it’s unusual in that it features four writers, on widely-scattered multiple characters, telling one interwoven story by one artist. It’s yet another horror book (in the editorial material, they namecheck David Cronenberg, and use the term “body horror), and the artist, Joe Infurnari, has a sketchy, detailed style that’s good at 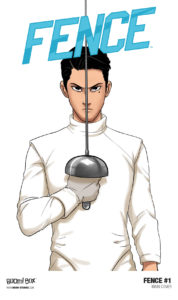 communicating the creepy, paranoid dread that all the mutated body parts and exploding flesh require. Fence is, duh, about fencing; a rookie, low-income teen who’s shown aptitude enters a local tournament, gets beaten badly by a high-caliber hotshot his own age, and then ends up running into him again when he enrolls in a boys’ school to join their fencing team. It’s a very manga-ish story, told in a very manga-ish style, but it gets the backstage feel at the local tournament right, and is good at drawing the characters’ personalities quickly and engagingly; if you’re a fan of other Boom!Box titles like The Backstagers, or sports comics generally, you’ll probably like it too.

Of the remaining indy books, Maestros continues to look a lot like a Mark Millar title, partly because of the cosmic-fantasy plot, partly because creator Steve Scroce’s crisp, beautiful-people art is reminiscent of Frank Quitely’s, and partly because the main character has that patented Millar combination of modern smart-ass slacker and eventual hero. He’s an Earthman whose mother had a fling with a cosmic wizard, and the plot ping-pongs between him as a kid, taken by his father to the royal court and getting into trouble, and then tortured, by the sadistic royal assistant, and him ten years later, taking over as ruler after his father is killed by mysterious assassins. OK so far, and the art really is nice-looking; if Scroce also has Millar’s aptitude for crowd-pleasing endings, this could be a hit. Mage finishes the first four-issue arc of its concluding volume of Matt Wagner’s long-brewing trilogy (the first volume came out in the ’80s) with a long battle against supernatural forces: a good example of that creator’s storytelling chops, and evidence of what makes this book such a well-loved, and much-anticipated, series with older fans. The Wicked and the Divine ends its own current arc with an all-black cover and a game-changing revelation; it’s starting to gear up for its climax in a year or so, and beginning to pay off handsomely for readers who’ve been following it for the last couple of years (newer readers should start with the first of what, when this latest arc is collected, will be six trade collections; the Gillen/McKelvie is one of the sleekest, most-accomplished duos out there right now, and the story deserves to be experienced from the beginning; don’t blame us if, after reading that first trade, you’re compelled to purchase and binge-read all the others, too).

With 40 years of experience in comic reading, collecting and reviewing, English Professor Phil Mateer has an encyclopedic mind for comics. Feel free to ask Phil about storylines, characters, artists or for that matter, any comic book trivia. He will post your questions and answers on the AABC blog. His knowledge is unparalleled! He is also our warehouse manager, so if you are looking for that hard to find comic book, ask Phil!
View all posts by Phil →
This entry was posted in New Comics, Reviews and tagged Batman, Brilliant Trash, Bug, Champions, Dark Fang, Defenders, Doctor Strange, Evolution, Fence, Hawkeye, Maestros, Mage, Punisher, Spider-man, The Wicked and the Divine, The Wild Storm, Thor. Bookmark the permalink.