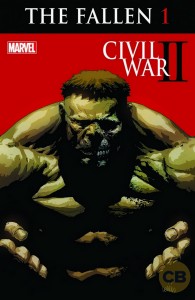 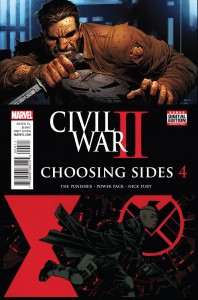 There were tons of Civil War II tie-in books this week — as in, practically every title has a CWII banner —  but not that many that stood out. The Fallen, which could easily have been a regular issue of The Hulk — it’s written by that book’s regular writer, Greg Pak — looks at the aftermatch of the Bruce Banner death, as there’s a reading of a video will, and lots of reaction by the various 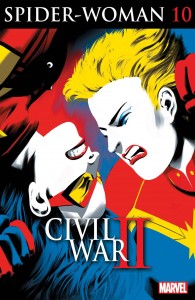 members of the superhero community and supporting cast. Fair enough, and it’s always nice to see Bagley’s clear, easy-to-like art, although ultimately this is more of a supplement/coda to the action of the main event than its own self-contained story. Choosing Sides is the same: three stand-alone tales of various characters and how they react to the controversy: The first shows how the Punisher doesn’t need a future-predictor to figure out what the bad guys are up to, and is written by Chuck Brown, drawn with impressionistic, thick outlines by Chris Visions, and colored with Day-Glo blood-red by Megan Wilson. From that grim opening, we pivot to a cartoony, candy-colored (also by Wilson, demonstrating her range of styles) Power Pack 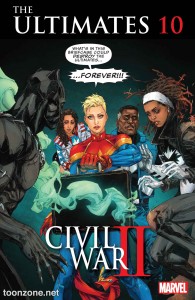 story, written by John Allison with art by Rosi Campe. The quartet of super-powered kids is currently a trio, with older bro Alex off with Reed Richards and family in the multiverse, but this offers some deft characterization of the remaining three; it’s like checking in on some old neighbors who moved away, but whom you remember fondly. Finally, there’s another installment of the ongoing Nick Fury story, “written” and drawn by Declan Shalvey — “written” in quotes because there are no actual words; it’s mostly a silent battle between the Black Widow and Fury, and very good-looking.  Spider-Woman’s cover implies an in-book confrontation between its title character and Captain Marvel, but that doesn’t happen in this issue — instead, Jessica and crew run a bunch of proactive missions based on the Ulysses future-casts, becoming convinced that Carol is right — until the news breaks about Hawkeye and Bruce Banner, setting up a big 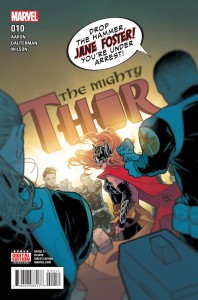 confrontation…. next issue. There’s the same light touch as in all of Hopeless’s scripts for this volume so far, and the Rodriguez/Fish art collaboration hits just the right cartoony, stylized tone.  Ultimates has much the same plot, with that group of heroes running the same sort of Minority Report arrest-them-before-the-crime missions, except that there’s a lot more debating of the ethics involved, plus a more problematic case, plus a big subplot about Thanos, on lockdown since he killed James Rhodes and put She-Hulk into a coma, scheming out his escape; all of that makes this comic seem the most substantial, and the most connected to the main event, of this batch of tie-ins. That leaves just two Marvel books that aren’t tie-ins; Mighty Thor is in the middle of a typical Jason Aaron story, with S.H.I.E.L.D. agents both canny and clueless, a female assassin in bondage gear, dark and light elves, corrupt 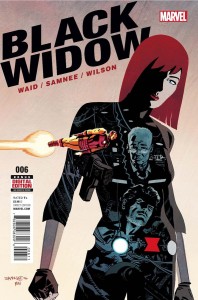 industrialists who can turn into minotaurs — and, of course, Thor herself, who’s actually Jane Foster… or is she? (there’s one of those classic “how can Clark Kent and Superman be together in the same place” bits thrown in, too). This large and diverse group of characters is all ably drawn by Russell Dauterman, who’s able to handle action, comedy and suspense in equal measure; there’s a reason this has been one of the most popular Marvel books in both its last volume and this current one. That leaves Black Widow, another book with a female lead and a polished creative team in Waid and Samnee; this issue ends the book’s first arc, with all the smooth action, double-crosses, revelations, and reversed reversals you’d expect from a writer that smart, and an artist that axxomplished. 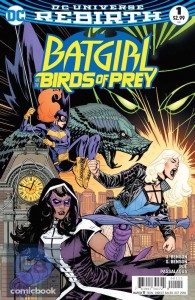 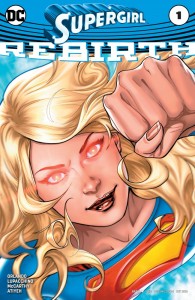 Four DC first issues, plus Batman: Batgirl and the Birds of Prey‘s first regular issue continues straight from its Rebirth one-shot; it hits a bunch of familiar notes — Barbara and Dinah’s friendship, the Huntress’s obsession with hunting mobsters, a new creepy bad guy — and wraps them into a mystery about someone new taking the name “Oracle.” None of this particularly stands out, but it goes down smoothly, and fans of the previous versions of the title should like it well enough. Supergirl, in its intro one-shot, takes pains to be familiar, too — at least, to the 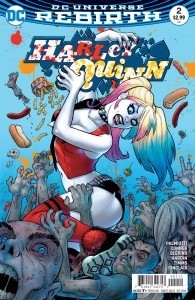 audience of the TV show, since the story here gets the comic version closer to it, assigning her two adoptive parents named “Danvers” and having her work for a secretive government agency. She’s younger than in the show — still in high school — and more recently arrived on earth, but a lot of the Kryptonian history seems the same (she even ends up fighting a Phantom Zone semi-bad guy), and the costume’s the basic red/blue/yellow skirt, a cape, and the “S.” As with Batgirl/Birds of Prey, there’s nothing mind-blowing about any of this, but it’s a smart combination of elements that have worked for the character in the past, so it’s an effective start. Harley Quinn and Suicide Squad avoid any big changes, too — Harley continues with the Palmiotti/Connor writing team

(DC’d be crazier than the title character not to, since those two have made her into such a hit over the last few years), and with Chad Hardin back as co-artist everything looks and feels the same as ever, while Suicide Squad, as its Rebirth intro did a few weeks ago, continues with Rick Flagg and Katana shepherding the various super-villains (Harley, Boomerang, Croc and even the Enchantress) through their missions — with the added attraction that all of this is pencilled by Jim Lee. Again, there’s no new ground broken, but fans brought over by the movie will find this easy to get into, while older ones should like it too: a smart marketing move by a company that hasn’t always made those. Finally, the new Batman, already up to issue #5 (that two-a-month publishing schedule 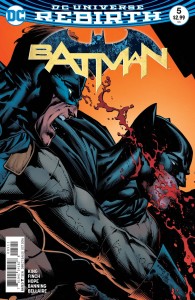 adds up fast…), concludes its first arc with the Caped Crusader fighting a Superman-level Gotham hero who’s gone crazy; King knows how to set up fan-interesting plots like that (a talent that’s made writers like Geoff Johns and Brian Michael Bendis popular, so he’s following in successful footsteps), and the Finch art has a kind of slick shadowiness to it that works well with the Gotham City setting. King even throws in one of those here’s-what-the-future-will-bring bits that worked so well in The Vision — although it worked much better with a B-lister like the Avengers synthezoid, where we don’t really know what could happen with him,  than with an icon like Batman, where we know nothing will really change…. 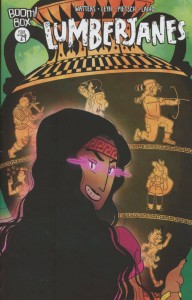 The Wicked and the Divine #22 — Writer: Kieron Gillen;

Lots of indy books this week — The Backstagers is set… well, backstage, at the theater of an all-boy prep school; it turns out that, unknown to the vain actors or the school at large, there are all kinds of weird creatures and extra-dimensional adventures going on back there, and it’s up 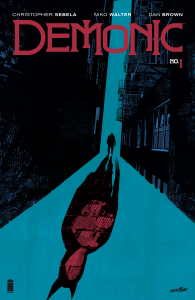 to the kids who are the prop-makers and set-constructors to deal with them; if that magical-realistic setting, the sharply-drawn crew of  idiosyncratic kids, and the casual emphasis on diversity remind you of Lumberjanes, I think that’s deliberate — they’re from the same publisher, and there’s a big ad for the latter book on the last page of this one.  Lumberjanes itself has a new issue out this week, with the return of Diane, a previous antagonist/frenemy, plus the start of a new adventure, with a cabin of campers turned to stone; it’s a tribute to the strength and energy of the comics market that a book 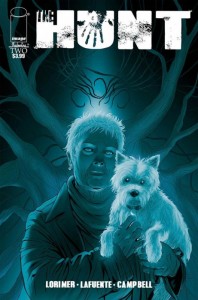 this quirky and cartoony has made it to 29 issues, but it’s so confident, so well-told and entertaining, that it ought to be able to last for many more. If you’ve never tried it, this start of a new arc is a good place to begin. Briggs Land is a first issue by the prolific Brian Wood, about a family/community of antigovernment survivalist types who’ve been living off the grid on a hundred square miles of wilderness for generations, but now, with their patriarch in jail, are starting to break down into warring factions, with the wife/mother and the sons fighting for control. Woods walks a tightrope between making the 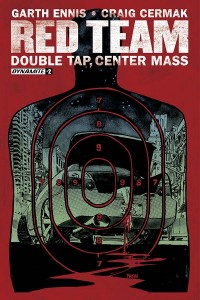 group sympathetic and scary, and there’s a ripped-from-the-headlines feel to it that gooses it along and gives it energy; Mack Chater’s clear and solid in drawing both the people (there are a lot of them) and the action, and if you like books like Lazarus you should pick this up, too.  Demonic comes out of one of those “Pilot Season” try-out books Robert Kirkman did for Image awhile back; it’s about a guy whose daughter is sick who makes a deal with… not The Devil, but a devil, and it requires him to put on a cape and skull mask and Freddy 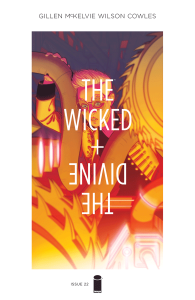 Krueger finger-knives, and kill at least one bad guy a night for her. That’s a solid, if well-traveled, concept; Walter gets off a couple of nice flourishes with the art, and Sebela does an OK, if predictable, job on the script.  The Hunt is Irish faerie folk in an uneasy collaboration with humans to stop a third evil; writer/artist Lorimer has mastered the Brian K. Vaughan tricks of leading up to a double-page centerfold reveal in the middle, then finishing with a twist/cliffhanger splash on the last page. The Irish dialect is a little thick, but musical too, and colorist Joana 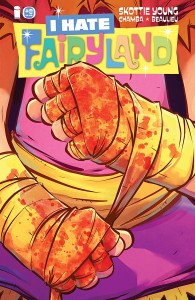 With 40 years of experience in comic reading, collecting and reviewing, English Professor Phil Mateer has an encyclopedic mind for comics. Feel free to ask Phil about storylines, characters, artists or for that matter, any comic book trivia. He will post your questions and answers on the AABC blog. His knowledge is unparalleled! He is also our warehouse manager, so if you are looking for that hard to find comic book, ask Phil!
View all posts by Phil →
This entry was posted in New Comics, Reviews and tagged Backstagers, Batgirl, Batman, Birds of Prey, Black Widow, Briggs Land, Civil War II, Demonic, Harley Quinn, I Hate Fairyland, Lumberjanes, Red Team, Spider-Woman, Suicide Squad, Supergirl, The Hunt, Thor, Ultimates, Wicked and the Divine. Bookmark the permalink.