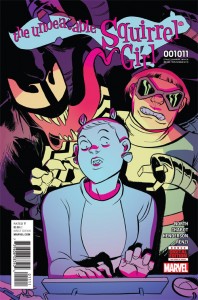 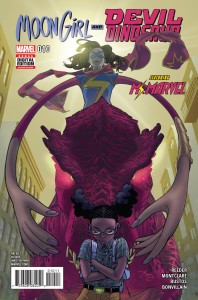 young women readers, from tweens to twenty-somethings. Look at Squirrel Girl‘s one-issue tale (heh…), which manages to be both a continuity-respecting, intricately-plotted supervillain confrontation, a tutorial on basic computer programming theory, and a demonstration of its role-model title heroine’s confident optimism. Guest artist Chabot stays close to regular illustrator Erica Henderson’s sharp, cartoony visuals, and despite her absence this is a perfect sampler issue, the kind you could give to new comics readers knowing they’d probably like 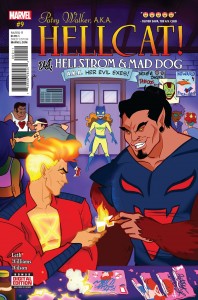 it.  Moon Girl and Devil Dinosaur is the same, with a pre-pubescent protagonist who’s almost a generation younger, but in her own way just as confident and courageous as Squirrel Girl‘s Doreen. Credit the Reeder/Montclare/Bustos/Bonvillain team, who’ve been together almost a year now, and have meshed to create a brightly-colored, good-looking YA series. Hellcat‘s for slightly older readers; it’s an interesting mix of simple-looking anime-style art (as candy-colored as its companions) and sophisticated, continuity-heavy plotting, with yet another central character who’s optimistic, problem-solving and impossible not to like. 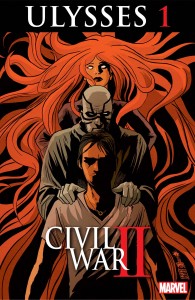 Marvel’s one debut this week is of a Civil War II mini-series, this one featuring the future-casting Inhuman Ulysses, who’s at the center of the fight. This first issue has the other Inhumans taking him to Karnak, who, 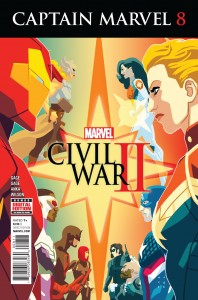 having been reinvented by Warren Ellis as a sort-of Zen nihilist, becomes the kid’s mentor — if by “mentor” you mean someone who creeps him out and threatens him until his powers trigger. Writer Ewing channels Ellis’s version of the character quite a bit here, from the weird inhabitants of Karnak’s tower to his own quiet menace, and Palo’s sketchy, minimalist style actually fits the tower’s austere setting well; if you like the Ellis Karnak book, or are following the CWII saga, you should like this too. Captain Marvel is, of course, yet another CWII tie-in, since she’s so central to that event’s plot. While the main event, and many of the other tie-ins, have made her something of the bad guy, setting up her proactive, pro-Ulysses position as misguided profiling, her own comic is 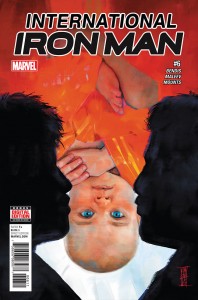 a lot more sympathetic, showing how she’s struggling with the implications of her position, emphasizing how much good she’s doing with it, and noting how much she worries about the inevitable collateral damage; it’s a canny piece of character-building, and an important piece of the overall event puzzle. International Iron Man doesn’t even seem to be an Iron Man book at first, as it opens with a Greenwich Village singer who gets recruited, and bankrolled by, S.H.I.E.L.D., but stick with this episode; even though Tony Stark’s never in it, it pays off at the end, and the Bendis/Maleev team has been together long enough to make the storytelling smooth, cinematic and attractive. 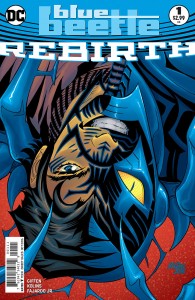 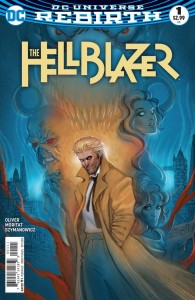 Blue Beetle starts up again, still with the Jamie Reyes version of the character, and avoids an origin tale in favor of just jumping in with the regular cast (including Ted Kord as mentor) — although there’s at least one big “this is different from before” development. Giffen always puts a lot of thought into his plots and world-building (if you can get past a couple of his dialogue tics), and Kolins can be depended on for solid, easy-to-follow art with a couple of skillful, showy splash pages. Hellblazer is yet another John Constantine relaunch, with that reluctant hero back in London and surrounded by familiar cast members (including best-friend Chas and the Swamp Thing); its biggest selling point is the art by Moritat, who becomes 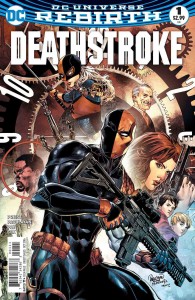 the latest in a long line of quirky artists (usually good at drawing both women and horror) to illustrate the dodgy Englishman’s occult adventures. Deathstroke launches its regular series just two weeks after its “Rebirth” issue, with writer Christopher Priest continuing his intricate plotting and characterization, and focusing more on expert-assassin Slade’s family and friends than the last few versions of the book have. Deathstroke, as his name implies, is a character whose fans are often more interested in the slashing and punching action than in extensive continuity or cerebral story developments, so it’ll be interesting to 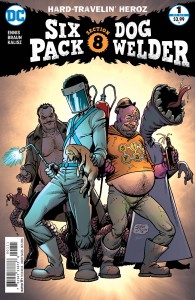 see how this incarnation of the character fares. Six Pack and Dog Welder is, on the one hand, a welcome reunion of the Garth Ennis/Russ Braun team that’s worked on The Boys, Battlefields and, most recently, the Secret Wars tie-in Where Monsters Dwell; on the other hand, it’s hard to predict how many readers will care about the scruffy, low-rent characters here, part of the offbeat supporting cast of Ennis’s previous Hitman series. I’m one, and if you want a counterweight to the normal square-jawed, idealistic super-people, this group of drunken dreamers and oddly-sympathetic losers might make you one, too. 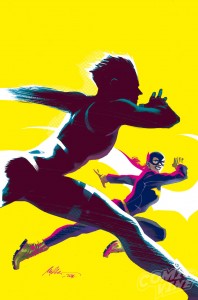 Batgirl continues to be an OK relaunch, with Barbara in 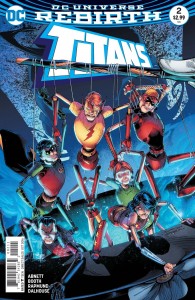 Japan and ending up in a sort-of Ultimate Fighter competition; it doesn’t have the oomph of the previous volume’s cutting-edge manga-inspired visuals, but Rafael Albuquerque is a good substitute: his fluid action sequences and appealingly freckled Babs, both cute and determined, give the book a solid foundation. Titans has an equally firm structure, between Abnett’s effective, multi-layered plotting — and his use of Abra Cadabra — one of the most powerful and deadly of the Rogue’s Gallery foes — and Booth/Rapmund’s traditional superhero action and sparkle (they’ve been producing work since their early-Image stuff in the ’90s, and it shows in their easy mastery 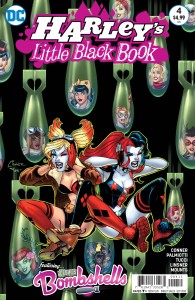 of all the regular costumed-hero poses and cliches). Harley’s Little Black Book sees Quinn teamed up with the alternate-universe, WWII-era Bombshell characters (including her own counterpart), in a typically-gonzo, feature-length tale involving Nazi bombs, Hitler, and Superman’s balls (the explanation of, and discussion of which is a good example of the character’s, and the book’s, humor: sophomoric, but somehow so charming and flirty and, somehow, empowering in tone that it fits perfectly). The Tucci art nails the early-’40s era, and matches the Bombshells book’s own visuals — and there are even a couple of fantasy-sequence pages by Joseph Michael Linsner, no stranger to drawing confident, sexy women. 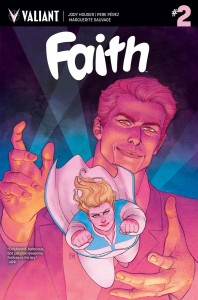 Quite a wide range of indy stuff this week (although that’s not so unusual, since the indy books tend to be more individualized anyway…). Lake of Fire is a medieval tale involving an aspiring young French knight, a grizzled, cynical warrior, a monk looking for heretics… and an alien spaceship that crash-lands in the countryside, unleashing deadly insect-like creatures. That’s a lot of elements to combine, but Fairbairn handles them well, with a script that manages to supply a lot of information

without overloading the reader, and art by Smith that’s just cartoony enough to be clear and easy to scan, without sacrificing the horror elements of the aliens — or of some of the earthmen, too; it’s a decent beginning, and an effective first issue.  Faith is Valiant’s super-heroine who can fly — although the “companion field” that enables that gives her some other abilities, too, and they’re used cleverly here. She’s an appealing character, a fangirl with brains and courage, and the book’s first two issues establish her as competent and easy to like. 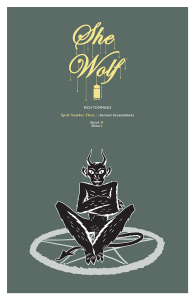 Snotgirl, written by Bryan Lee O’Malley (there’s a pact among reviewers that we have to call him Bryan Lee “Scott Pilgrim” O’Malley…) is about a young fashion blogger with massive insecurities; it offers equal parts humor and pathos, and Hung’s art makes it look like some fascinating, primary-colored Japanese romance comic– not a bad thing at all, as it turns out. especially when it’s crossed with a potential murder mystery, as here.  Archie, at heart, is a blend of romance and comedy, too, and Mark Waid’s been 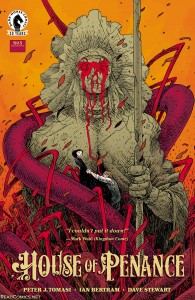 infusing it with some longer-form drama; it all still works well, and the soap-opera elements of the Archie/Betty/Veronica love triangle should keep readers coming back, although I think they need to find an artist who’s going to stay around for awhile: Fiona Staples on the first arc was a very tough act to follow, and Veronica Fish and Annie Wu both did well in her footsteps, but settling on a long-term illustrator would give the book more durability and character. She-Wolf doesn’t have that problem, since it’s created, written and drawn by the same person — and, 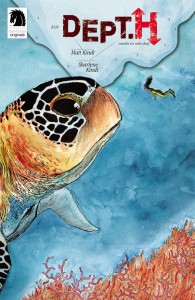 with three issues under his belt, Tomaso’s really starting to stretch out, with bold colors, simple-but-elegant designs (especially in the surreal dream sequences), and creepy lycanthropic/demonic horror that’s unlike anything else on the stands. Ditto for House of Penance, a mini-series that starts with the real-life Winchester House and takes it into supernatural territory, leveraging Peter J. Tomasi’s talents for research and psychological horror and combining them with Ian Bertram’s wide-eyed, fever-dream visuals into another unique, utterly-unnerving comic. Matt Kindt has a 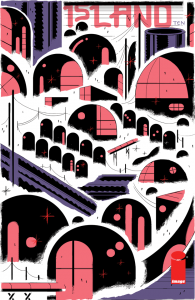 similarly-individual style, all faux-primitive sketchiness and watercolor pastels (most of those thanks to his wife Sharlene), as he continues his deep-sea (really deep, as in 20,000 league down) murder mystery. Island reaches double digits (not that easy for an uncompromisingly-high-quality anthology title) with a typically-ideosyncratic lineup: 33 pages of Farel Dalrymple’s Pop Gun War and 28 0f Gael Bertrand’s A Land Called Tarot, plus shorter contributions from Fil Barlow (Zootopia) and Remy Boydell (Pervert Fashion). 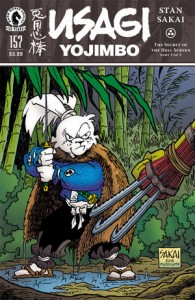 The slightly-larger page size and top-notch production values give the art the showcase, and respect,  it deserves, and show why this book keeps attracting such talented creators. That leaves Usagi Yojimbo, a book I usually leave until the end just because it’s so simple to talk about, elegant and skilled; this 157th issue is the conclusion of a three-parter guest-starring the Columbo-like Inspector Ishida, as he and Usagi investigate murders at a temple that may or may not involve the supernatural, and has the same expert construction, action, humor, wonderful art and satisfying conclusion that, spoiled as we are, we’ve come to expect from all of Sakai’s work.

With 40 years of experience in comic reading, collecting and reviewing, English Professor Phil Mateer has an encyclopedic mind for comics. Feel free to ask Phil about storylines, characters, artists or for that matter, any comic book trivia. He will post your questions and answers on the AABC blog. His knowledge is unparalleled! He is also our warehouse manager, so if you are looking for that hard to find comic book, ask Phil!
View all posts by Phil →
This entry was posted in New Comics, Reviews and tagged Archie, Batgirl, Blue Beetle, Captain Marvel, Civil War II, Deathstroke, Dept.H., Faith, Harley Quinn, Hellblazer, Hellcat, House of Penance, Iron Man, islanbd, Lake of Fire, Moon Girl and Devil Dinosaur, She Wolf, Six Pack and Dog Welder, Snotgirl, Squirrel Girl, Titans, Usagi Yojimbo. Bookmark the permalink.