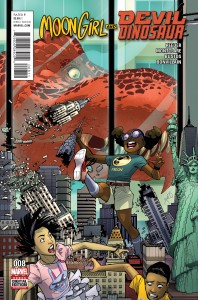 The women heroes really rule at Marvel right now — many of the company’s best, most 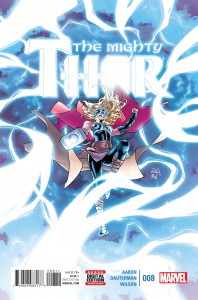 imaginative storytelling comes from books with female leads. Look at the four here: Moon Girl and Devil Dinosaur is just a delight, with its little-girl and big-T-Rex protagonists equally prickly, stubborn but lovable, and the Natacha Bustos art getting more accomplished with each issue (look at the cover here, where Lunella, who’s switched brains with the dino, is striking a pose exactly like Max in Where the Wild Things Are — and, on the inside pages, look at how much emotion the art’s able to convey with just a few lines in the dino’s face — like his comical worry on the book’s last panel). In a decade, we’re all going to look back on this as a classic kids’ comic, so support it now and let this team produce as many issues of it as possible. Mighty Thor is much more “adult,” with its sprawling mythologies and cancer-stricken heroine, but she’s an equally-compelling 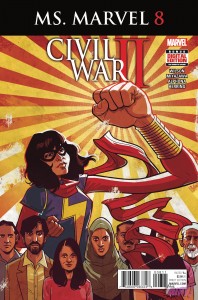 character (consider the way that, as the frail Jane Foster, she handles two idiot S.H.I.E.L.D. agents), and Aaron and Dauterman are crafting a good-looking, exciting adventure serial here. This issue isn’t a bad jumping-on point, either, so in an otherwise-relatively-slow week, it’s worth a look. Ms. Marvel has always had a bright humor to it, a lightness in tone that fits its adolescent, shape-changing lead, but writer Wilson underpins it with some subtle, solid points about acceptance, responsibility and diversity, too; this issue’s first few pages, a flashback to Kamala’s ancestors leaving India after the end of British rule and the religious violence following the creation of Pakistan in the late 1940s, shows just how moving, and serious, she can be — and the book’s present-day Civil War II debates do an 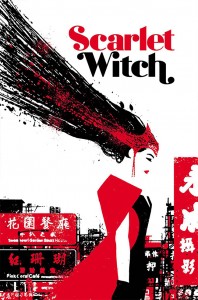 equally-good job of conveying both sides of that crossover’s central conflict, better than any of the other tie-ins so far. Scarlet Witch has had author Robinson paired up with a series of stellar artists, as he’s had Wanda wandering the world, putting out magical brushfires, and this issue Annie Wu gets her chance in the spotlight; she delivers everything from the Chinese-tapestry style in the opening pages, to the Hong Kong shoot-’em-up action in the main story, with her typical skill and grace. It’s another done-in-one story, too, so if you’re looking for entertainment and craftsmanship without having to make a multi-issue commitment, it’s a great bet. 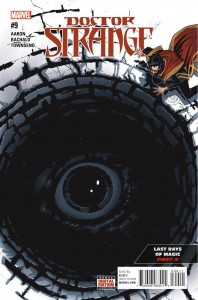 The week’s other Marvels. Deadpool/Gambit is surprisingly good, with the two ethically-challenged 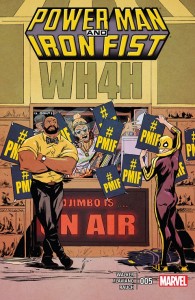 frenemies running a con involving Spider-Man and Daredevil that’s tongue-in-cheek funny, and Beyruth’s angular, indy-ish art being just off-kilter enough to make a good match for the script (Acker and Blacker don’t have a big comics history, but have been producing the Thrilling Adventure Hour podcast for quite a while now, so they’re pretty good at tweaking genres). Doctor Strange continues its “Death of Magic” arc with Doc getting all the little scraps of magic left in the world together, along with a couple of allies, and picking up a big axe and a bow and arrow to fight the inter-dimensional Science Inquisition bad guys; 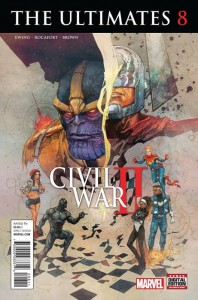 Bachalo’s art and Aaron’s dramatic, high-stakes writing keep it on the essential-reading list. Power Man and Iron Fist is a lot more light-hearted, achieving much of the amusing buddy-movie charm of the title’s original run; this issue’s a Rashomon-like breather between bigger stories, and a good place to sample the book, and check out new artist Flaviano, who’s not quite up to Sanford Greene’s easy humanism, but has a knack for semi-humorous punch-’em-up scenes that serves him well here. Ultimates #8 and Captain America #10 are both 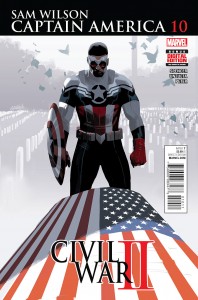 Civil War II tie-ins, with Ultimates coloring in a number of details both before and after the big fight with Thanos that’s triggered the main mini-series’s events, and Captain America seeing Sam delivering the eulogy for the hero whose death crystallized everyone’s arguments and bad feelings; both books have characters who are at the center of the unfolding plot, and both do a decent job of delivering what feels like important parts of the overall story, while still staying true to their own ongoing serials. Civil War II: 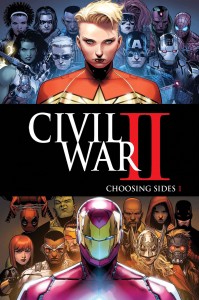 Choosing Sides is one of those anthology issues, involving a trio of characters caught up in the events: Nick Fury is written and drawn by DeClan Shalvey, who’s previously partnered with Warren Ellis on Moon Knight and Injection, and colored by Jordie Bellaire, so it’s worth a look; Night Thrasher, written by Brandon Easton and drawn by Paul Davidson, with colors by Andrew Crossley, is OK, which is actually considerably better than we might expect for that ’90s-era skateboarding character. The third tale is about 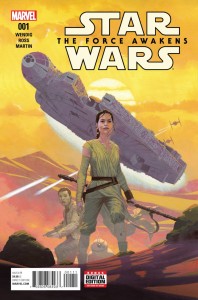 Damage Control, the Marvel world’s after-fight clean-up crew, and is written by Chad Bowers and Chris Sims, drawn by Leonardo Romero, and colored by Miroslav Mrva; it’s nice to get a chance to see those characters, created and usually scribed by the late Dwayne McDuffie, get to come out and play again. That leaves Star Wars: The Force Awakens #1, which is an adaptation of the movie; this first issue gets up to Finn and Rey meeting and getting chased around the desert-planet bazaar, and old pro Ross does an effective job getting the faces and hardware right, and making this a solid print-media visualization of the film. 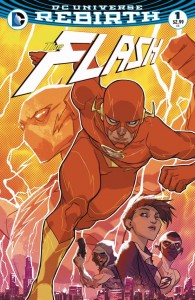 The DC first issues for the week; all three have already had a Relaunch debut, and now are starting their main series. Flash does a good job of triangulating between the TV and 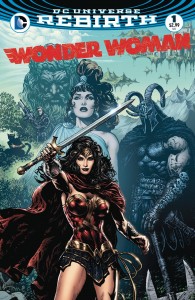 comic versions of Barry and his supporting cast, while Di Giandomenico offers a sleek, lightning-bedecked version of the character that pops visually (any artist named “Carmine” ought to be able to draw the Scarlet Speedster well…). Wonder Woman has the heroine beginning a quest for her true origins, with Liam Sharp getting off some good-looking splashes and other panels; he’s able to balance the imposing and attractive aspects of the character well, and the various monsters have an eerie, Richard Corben-like appearance that enhances their menace. 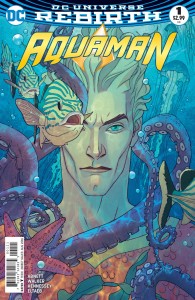 Between that, and the way he nails the last-page cliffhanger reveal, pretty much everyone who reads this ought to be back for the book’s second issue.  Aquaman benefits from a striking, ethereal underwater cover by the book’s regular art team, and offers a smooth story that introduces everyone and sets up a big main-villain confrontation with lots of action. It’s perfectly OK, although not at all surprising; if you’re a longtime comics reader, it all goes just about the way you’d expect — meaning we’ll need at least another issue to get a better feel for where this creative team is taking the book. 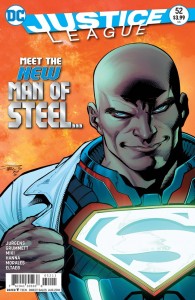 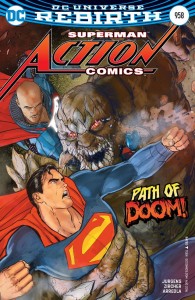 The other relaunched DCs: Justice League is a prequel to Action Comics #957, that book’s back-to-the-original-numbering debut, by its same writer, Jurgens, and showing how Lex Luthor, after the new-52 Superman’s death, ends up getting the Man of Steel’s cape and taking on his mission; read Justice League , and then re-read that first Action, and then this week’s #958 will make sense (and Lex’s motivations will be more clear, and less evil, than they might have seemed otherwise). Jurgens, who’s been writing Superman comics for decades, is an artist himself, and so knows just how to give his visual partner, Zircher, plenty to 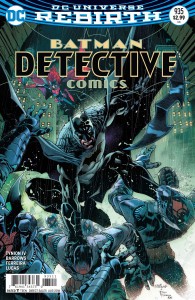 do in this episode: there’s a three-way fight between the new-old Superman, Luthor, and a revived Doomsday, with enough high-energy events for the comic to live up to its name.  Detective sees Batman, and Batwoman, training their new crew (Spoiler/Red Robin/Orphan/Clayface) in a danger room made up of Clayface’s discarded skin, so points for a combination of intriguing and disgusting; there’s a bunch of character-establishing, and then it ends with Batman facing a cliffhanger fight against dozens of well-trained, armored opponents. Like Action, it knows to offer new readers plenty of movement, flash and suspense, so they’ll be eager to catch the next installment. 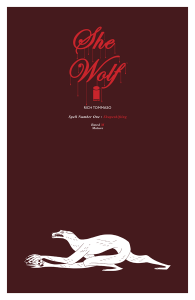 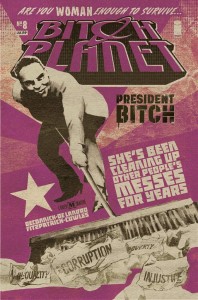 lately of the hard-boiled crime series Dark Corridor, offers a modern-day Gothic werewolf tale in She-Wolf.  Tomasso’s out at the deep end of the indy pool, with artists like Richard Sala and Charles Burns and Rick Geary, and this is a rich, beautifully-illustrated comic (that cover’s like something off of a Greek vase; click it to make it bigger) that will make all your art-walk friends think you’re cool. Bitch Planet has similar cultural oomph; Kelly Sue DeConnick’s patriarch- 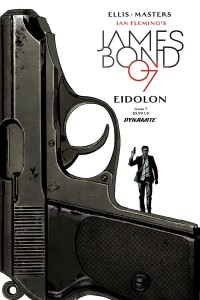 oppressed, prison-planet tough girls were anti-Trumpian almost before there was a Trump, and grown-up riot grrls (and their children) should find their stubborn  dignity, and refusal to surrender, an inspiration. Dept.H’s Matt Kindt is as stylized, in his own way, as Tomasso; his exposed-border artboard pages and delicate pastel tones make him look like a watercolor artist, but all those floating underwater-murder-mystery 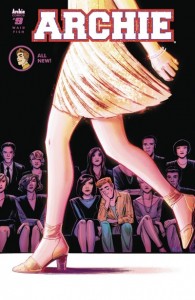 images are anchored by solid inking and composition.  James Bond sees Warren Ellis starting a new Bond story (a pleasant surprise for those who thought he was going to be six-issues-and-out), involving a Los Angeles extraction of a consulate employee who’s uncovered the usual shadowy corporate criminal mastermind; it’s a more-than-good-enough first chapter  that should bring everybody back for more. Archie 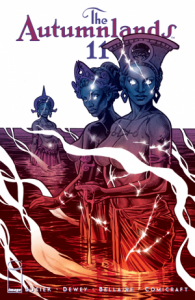 continues to look at the origins of the Archie/Betty/Veronica triangle, with Waid and Veronica Fish adding a modern gloss that, against some odds, works well. Bonus points for the classic-Archie reprint from 1963, and Waid’s editorial props to its master artist, Harry Lucey. Autumnlands is from Waid’s similarly-talented contemporary, Kurt Busiek; it’s a lush, E.R. Burroughs-ish fantasy set in an anthropomorphic future

where magic works, but is dying — and the animal wizards have summoned a champion from the past who turns out to be an American soldier. Dense world-building, confident plotting and Dewey’s painstaking, precisely-beautiful humanized animals are the biggest attractions. Finally, Usagi Yojimbo features the first of a two-part murder mystery guest-starring Inspector Ishida, Sakai’s Peter Falk-ish policeman, as he and Usagi look into a possibly-cursed tapestry’s connection to a couple of savage deaths; as always, it’s a master class on clear, compelling comics storytelling.