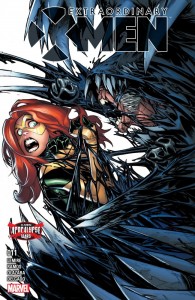 Ten new Marvels to talk about, so let’s take them five at a time. The Unbeatable Squirrel Girl gets to the top of the list almost every week her book comes out, as long as the North/Henderson team continues its combination of humor, sly subversion of superhero conventions and female-empowerment themes (Doreen has to deal with a love-stricken Mole Man this episode, and he’s like a stand-in for every geeky comic fan who can’t figure out how to talk to women, or see them as actual people; considering that she’s previously encountered his opposite, the uber-

macho Kraven the Hunter, and converted him into a friend, she really is unbeatable). Extraordinary X-Men is in the middle of an future-Apocalypse crossover between the X-books, so wheee, but the Humberto Ramos art, and its combination of cartoony and action-oriented impulses, makes it worth a try (just look at that cover, over to the upper right there — and, as always, clicking on the image will give you a bigger picture). All-New, All-Different Avengers is in the middle of one of those elaborately-plotted, continuity-rich multi-part Waid stories, involving the team in space, battling huge odds against Annihilus as they look for Nova’s dad; the interplay between the kids (Ms. Marvel, the Miles Morales Spider-Man, and Nova) 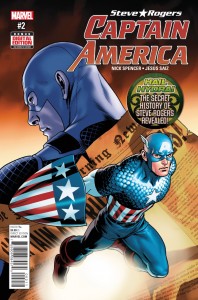 and the older heroes (Iron Man, Vision, Sam Wilson Cap, Jane Foster Thor) is fun to watch, and Asrar is good both at making everyone look human and on-model, and at getting off a couple of nice effects (including a last-page cliffhanger splash); this is a textbook example of how to write an indicidual chapter of a larger story, and still make it understandable and approachable. Captain America #2, which garnered a ton of publicity for its big debut-issue plot twist (Steve is, and has always been, a Hydra agent! OMG!) wastes no time in revealing the details about it in this sophomore issue — and, sure enough, and as anyone who’s ever read more than three Cap comics in the past already figured out, it involves both the Red Skull and a Cosmic Cube. There’s

more to it than that, of course, and the ramifications should affect a number of other books (especially Thunderbolts), but we can leave it to the readers to catch the details — and the well-composed, descriptive Saiz art helps quite a bit.  Spider-Man similarly benefits from its artist (the under-appreciated Sara Pichelli, who has a knack for rich detail and fluid action), as Miles gets caught by the Black Cat and Hammerhead (who’s both written and drawn with just the right combination of menace and absurdity) and deals with them, while a number of sub-plots involving friends and family percolate, and a last-page guest star who should be very familiar to Bendis fans shows up. 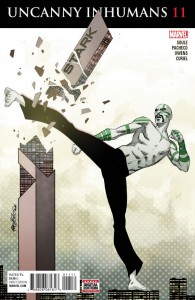 Captain Marvel has a Civil War II logo on its cover (and an image indicating that Carol and Iron Man will be facing off inside), but don’t be fooled — it’s actually a prequel to that series, still set in the Alpha Flight satellite, and after the future-casting Inhuman Ulysses shows up, but before the fight with Thanos that sets off the intra-hero squabbling. This gives the writers a chance to let Carol and Rhodey have some time together (made poignant because, although the characters don’t know his fate, the readers

do), and to have an encounter with villain Dr. Minerva that helps to crystallize and deepen her pro-active position on the future-predicting stuff. Uncanny Inhumans introduces a new Inhuman, Mosaic, who can inhabit other people’s bodies in a puppet-masterish way; Marvel apparently has big plans for him, making this a hot seller; it’s also got a Civil War II logo, but earns it, as the Inhumans get payback on Tony Stark for kidnapping Ulysses over in CWII #2, and show why it’s unwise to disrespect an entire race of beings with super-powers. Black Panther pays no attention to any of these developments, as Ta-Nehisi Coates and Brian Stelfreeze are

in the middle of the book’s first arc, involving Wakandan politics and citizen unrest; I said after each of its first two issues that this book was well-done as a big story (Coates, who’s won a number of awards for his non-fiction work, can clearly write fiction, too, and has an effective way with imagery, and Stelfreeze supplies detailed, lush visuals to supplement it), but that the individual issues aren’t very effective as stand-alone chapters of it, and that’s still true. Spider-Man/Deadpool offers a fill-in issue (but gets points for admitting it in the first page, Wade being nothing if not meta), after the first arc by regular creators Kelly and McGuinness; it’s funny

enough, and suitably pop-culture-cognizant (Scott Aukerman, the writer, is the mainstay of TV’s Comedy Bang Bang!, so he comes by it honestly), although like all fill-ins it’s kind of forgettable, with its lack of connection to the book’s ongoing serial plotting. That leaves Star-Lord #8, which is mostly about Peter and Kitty Pryde’s relationship, and shouldn’t be missed by fans who’ve been following the, ahem, star-crossed pair and hoping for some resolution to their romance; it’s helped by Garron and Robson’s version of Pryde, which reminds me of Art Adams’ in the way it nails both her air of utter competence, and her tough-girl cuteness. 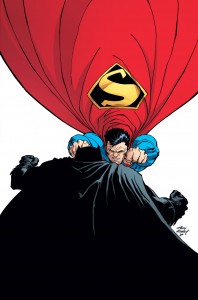 Kind of a fifth-week skip for DC, with no new Rebirth books (although a bunch of second printings of Flash, Superman, Batman, Wonder Woman, etc. came out), so the biggest book was Dark Knight III. No Superman/Batman fight like the one implied by the cover, but we do get to see a couple of Kubert/Janson Aquaman “splashes” (ta-dump bump…), a surprisingly-brightly-colored Man of Steel, a twelve-page mini-comic with Miller art about Lara Kent (who’s hanging out with a Kryptonian with the too-on-the-nose name of Baal, but despite his temptations isn’t as bad as she thinks she is), some good bits with the Flash, and a tutorial in how to defend Gotham City from hundreds of super-powered terrorists. 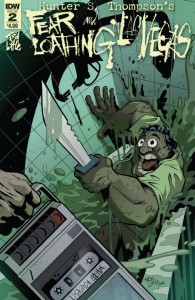 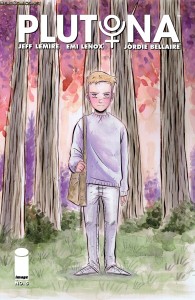 otherworldy-looking super-powered characters being put through their paces by Mark Millar, who retains his knack for knowing exactly which fan buttons to push to compel readers to keep coming back.  Fear and Loathing in Las Vegas continues its very faithful adaptation of the Hunter Thompson book (it’s averaging more than a page of comic per page of the 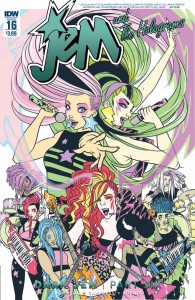 original, and retains a surprising amount of Thompson’s text), with cartoony art that’s a good fit for its satirical, drug-addled slapstick paranoid humor. Plutona, which began as a kind of “What if the Goonies found a dead super-hero woman in the woods?”, ends its five-issue run even more darkly than that premise would suggest, with Lenox’s simply-drawn, deadpan suburban kids somehow accentuating the quiet

horror in Lemire’s script.  Jem and the Holograms wraps up a very ambitious, trade-paperback-length “Dark Jem” arc satisfyingly enough, although the climactic concert is hard to communicate on just the printed page, and could have used more space; I keep calling it “unexpectedly good,” but maybe after sixteen issues it’s time to drop the “unexpectedly”? Rick and Morty has recent writer Fowler supplying both words and art, in a one-off story that’s a good sampling of the series’ cynical, break-neck action and wounded, often-haunting charm; whether you’ve ever seen the cartoon or not, it’s worth a look.

With 40 years of experience in comic reading, collecting and reviewing, English Professor Phil Mateer has an encyclopedic mind for comics. Feel free to ask Phil about storylines, characters, artists or for that matter, any comic book trivia. He will post your questions and answers on the AABC blog. His knowledge is unparalleled! He is also our warehouse manager, so if you are looking for that hard to find comic book, ask Phil!
View all posts by Phil →
This entry was posted in New Comics, Reviews and tagged Avengers, Black Panther, Captain America, Captain Marvel, Deadpool, DKIII, Fear and Loathing in Las Vegas, Hillbilly, Inhumans, Jem and the Holograms, Jupiter's Legacy 2, Plutona, Rick and Morty, Spider-man, Squirrel Girl, Star-Lord, X-men. Bookmark the permalink.