Still nine Secret Wars tie-ins this week, but we’re starting to see a light at the end of the tunnel, since two of them actually conclude; over on the DC side, the flood of new titles has settled considerably (only Bombshells made it to my “buy” stack this week), but that just leaves more room for a number of cool indy titles, including Casanova, Brian K. Vaughan’s US/Canadian war comic We Stand On Guard, Rich Tommaso’s almost-an-underground Dark Corridor, a new Jeff Lemire book, a new Minimum Wage, and the usual good comics from people named Moore (Alan and Terry, that is). Let’s see: 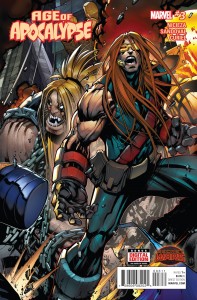 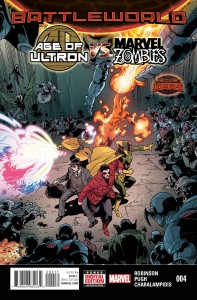 The first half of the SW books — Age of Apocalypse is hard to read if you were never a fan of that original alternate history, since it’s got so many funhouse-mirror versions of 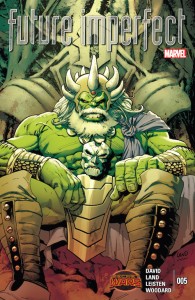 the various X-Men heroes and villains running around in it. Nicieza does his best to drop in background information and keep readers on track, and Sandoval’s slightly manga-fied art makes it all flow well, but by nature it’s a dark, dystopian tale with a lot of moving parts, and not the kind of thing that would attract most brand-new readers. Nice last-page hook for the conclusion next month, though.  Age of Ultron vs Marvel Zombies concludes that series, with the Wild West version of Hank Pym trying to save the day (and British writer Robinson’s attempts to do his Western-drawl dialogue can be plumb embarrasin’, I have ta tell ya…); it’s interesting because its conclusion

represents a major game-changer for all of Battleworld, and thus the Secret Wars books as a whole — reason enough for getting it, maybe, unless everyone else just ignores it…. Peter David does something similar over in Future Imperfect, which also concludes this week; its tale of the older, Maestro version of the Hulk searching for the Destroyer armor in order to challenge Doom himself leads to an energetic ten-page battle sequence (nicely drawn by Land), another seeming game-changer ending, and a clever David denouement that makes both the finale and the overall series feel like a success. Hail Hydra is for fans of Rick Remender’s last volume of Captain America, as Nomad, Steve Rogers’s adopted son by way of Arnim Zola (it makes sense if you’ve read the series, but otherwise just roll with it…) tries to liberate an 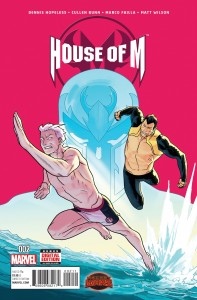 alternate-future section of Battleworld where Hydra and Zola won the fight they lost in the Cap book, and now rule. There’s lots of action (and lots of Venom, for fans of that character), although at base this, true to its Secret Wars nature,  is just another Marvel Elseworlds story. So too for House of M, where that mutant-centric, Magneto-family-ruled alternate timeline is in play– although it’s threatened by an alliance between Quicksilver and the undersea armies of the Sub-Mariner.  Lots of action here, too — including the Avengers, as rebels fighting on humanity’s side, and, for some reason Fin Fang Foom — although it too is dampened by the inevitable crossover/”what if?” feeling that none of it actually counts…. 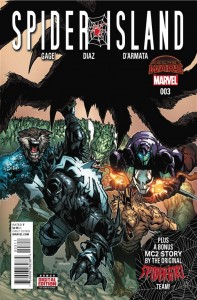 The rest of the mini-series: Spider Island has the benefit of longtime Spider-writer Gage making everyone’s dialogue and actions seem “real,” and of an everything-but-the-kitchen sink story involving brainwashed/zombified spider-humans, a Tony Stark who’s taken the Green Goblin formula, lizard mutates, Flash “Venom” Thompson (that symbiote’s getting a lot of play in these books…), and a 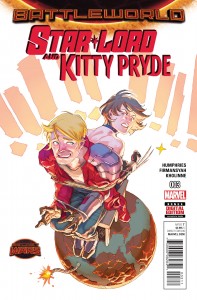 couple of other twists — plus a back-up story continuing the adventures of May “Spider-Girl” Parker.  Squadron Sinister is a bad-guy version of the perennial Squadron Supreme (originally a JLA knockoff), and pretty much exactly like DC’s Crime Syndicate version of those heroes, with an ultra-powerful Hyperion ruling a section of Battleworld and annexing their neighbors, particularly one that’s made up of New Universe characters like Starbrand, Merc, etc.; meanwhile, the manipulative Nighthawk works to pull off a coup behind the scenes. It’s all reasonably fun, although there are plot holes (the consummate gunman Merc shoots Nighthawk, but doesn’t consider that he might have body

armor, or bother with a headshot).  Star Lord and Kitty Pryde is another book with a conclusion this week, and it’s a light caper comic (with Firmansyah’s manga-style art fitting the tone well) that should satisfy readers of the regular Star Lord book.  Similarly, Thors should make fans of the regular title happy, since it’s by that book’s long-time writer, Jason Aaron, and has a twisty, continuity-rich plot involving Loki, dozens of different versions of the Thunderer, and a bunch of dead Jane Fosters and Donald Blakes. That makes it a decent read, and a fitting way to end this list. 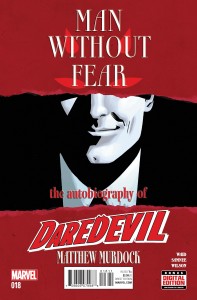 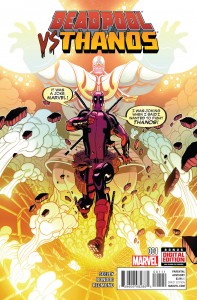 Some other Marvel books worth noting — and none of them require any Secret Wars knowledge.  Daredevil is the last issue of the acclaimed Mark Waid/Chris Samnee run, and wrap in satisfying fashion; Waid’s back-to-basics stories and Samnee’s sleek retro/modern style make a potent combination.  Deadpool vs. Thanos is set a few 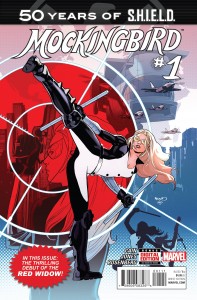 years ago, right before the Marvel Now! Deadpool relaunch, and involves the Titan and the Merc first battling over, and then trying to rescue their mutual love interest, the Marvel Universe avatar of death; it should make fans of both characters happy, and any book that begins with a recap posed as a dialogue between the real-life toy versions of the two characters (like one of those old Wizard/Toy Fair Foto Funnies) is OK with me.  Mockingbird is subtitled “S.H.I.E.L.D.: 50th Anniversary,” and is presumably part of a series of one-shots involving agents of that spy group now so well-known to Marvel movie and TV fans; it’s got a Barbara 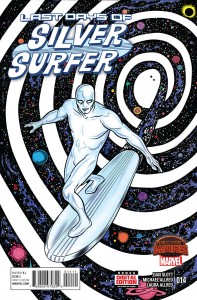 Morse adventure notable for its art by Joelle Jones (who wrapped her fun, chic ’60s-female-assassin Lady Killer earlier this year), and a backup Black Widow story also introducing the Red Widow, a young Russian ex-pat following in Natasha’s finely-curved and deadly footsteps. It’s notable for its author, Stohl, a popular YA novelist probably best known for her collaboration on the book Beautiful Creatures and its sequels (and for an all-new Black Widow/Red Widow novel that’s advertised in this comic).  Finally, Silver Surfer offers its penultimate issue, and, as always, should be bought without question just because Michael Allred is such a trippy, perfect artist for the Sentinel of the Spaceways (look at that cover…). 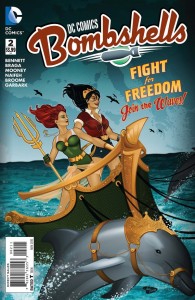 Yes, only one DC (sorry, Warner-philes, but in a week with no Batman or Superman books, and the publisher’s recent launches like Bat-Mite entering their fourth issues and thus no longer automatically worth covering, that’s all that stood out). Bombshells is definitely worth a look, though, with its just-before-WWII setting and clever gathering of various DC women heroes in its alternate timeline: a Wonder Woman who decides to defy her tribe and go out in man’s world to fight the evil of the Nazis, along with her undersea friend Mera; a pair of Russian women pilots, run afoul of the authorities, who turn out to be versions of Stargirl and Power Girl; a drop-dead version of Zatanna (aren’t they all?) who’s playing a Marlene Dietrich role in a Berlin cabaret. Two issues in, they’re still getting the band together, but so far this is a smart and good-looking new series, just far enough off the beaten path to be intriguing. 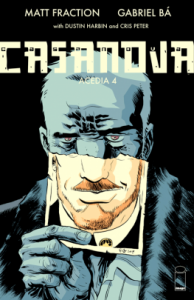 Minimum Wage: So Many Bad Decisions #5 (of 6) — Writer/Artist: Bob Fingerman 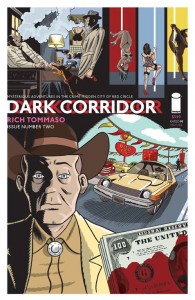 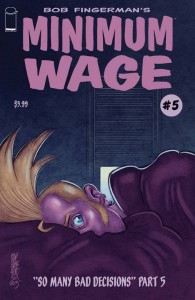 All the indy stuff: Casanova is Matt Fraction’s long-running (he started it before he became one of Marvel’s go-to writers) time-travelling spy series, reminiscent of Michael Moorcock’s Jerry Cornelius tales; this issue is a flashback filling in part of the life of the tile character’s now-companion (and fellow amnesia sufferer) Akim, and has a number of revelations that will only make sense to those who’ve been following the book 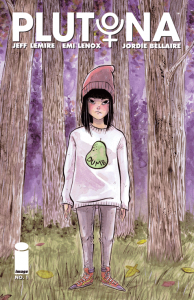 since the beginning.  No worries, though, because the Gabriel Ba art (his brother, Fabio Moon, normally does the main story) is as wonderful as ever, and having him also draw the Chabon backup (as always) is just another bonus.  Dark Corridor is Rich Tommaso’s hard-boiled noir book about a Sin City-like town, following an ex-cop and ex-con who’s made a big score (he thinks) and is spending it in lowlife ways; it’s gritty, violent and (sometimes) funny, drawn in an underground style that’s like reading a Ross MacDonald novel illustrated by Foolbert Sturgeon. If you like crime 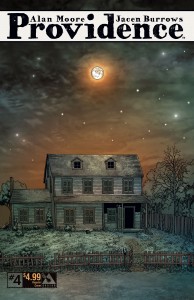 books, get it.  Minimum Wage continues Bob Fingerman’s series about a 20-something cartoonist in New York City and his professional and private lives; its painstaking, good-looking style always makes it worthwhile, and this issue, where ex-girlfriend Sylvia turns up (and picks up right where she left off) is sexy, smart and rich in characterization; it makes a great sampler issue if you’ve never checked out the title before. Plutona, the new Jeff Lemire book, is about a group of kids who find an (apparently) dead superheroine, the title character, in the 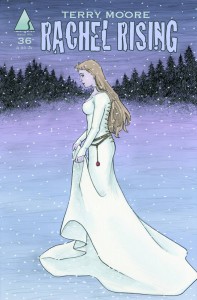 woods; the first issue draws the characters sharply and efficiently, laying out their family life and establishing their world (which has superheroes on it as a matter of course), and getting us to that high-concept last page with scruffy grace.  Providence is Alan Moore horror, positing H. P. Lovecraft in 1920 in New England, investigating various occult phenomena that will eventually inform his Cthulhic fiction; it’s just as quietly, and sometimes horribly, creepy as you’d expect, with Burrows’s sensible-but-not-quite real art channeling it 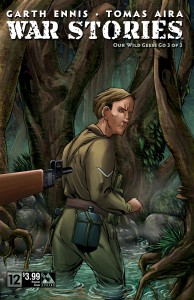 with eerie authority.  Rachel Rising is an everybody-stands-around-and-talks-strategy issue; it’s fun for fans, but if you’re new to the title spring for the first trade instead, and it’ll showcase Terry Moore’s easy, sexy figure drawing and knack for sudden violence.  War Stories concludes a three-part story about Irish and English troops battling entrenched and better-equipped Nazi forces (and each other) in late-WWII 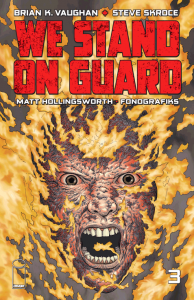 Germany; worth it, although the art’s barely serviceable in a few panels, and the story ends too abruptly — it feels like it should have been four parts instead of War Stories‘s standard (and maybe too rigid) three. We Stand on Guard continues to build its world of 2115, where the US has invaded and conquered most of Canada (they say the Canucks struck first), and a Canadian resistance force are the good guys. Action-packed and thought-provoking, and while it takes no preachy positions I can only wonder what the people on the Fox talk shows would make of it….

With 40 years of experience in comic reading, collecting and reviewing, English Professor Phil Mateer has an encyclopedic mind for comics. Feel free to ask Phil about storylines, characters, artists or for that matter, any comic book trivia. He will post your questions and answers on the AABC blog. His knowledge is unparalleled! He is also our warehouse manager, so if you are looking for that hard to find comic book, ask Phil!
View all posts by Phil →
This entry was posted in New Comics, Reviews and tagged Age of Ultron, Apocalypse, Bombshells, Casanova, Dark Corridor, Deadpool, Hulk, Minimum Wage, Mockingbird, Plutona, Providece, Secret Wars, Spider-man, Thanos, Thor Daredevil, War Stories, We Stand on Guard. Bookmark the permalink.