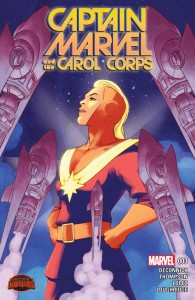 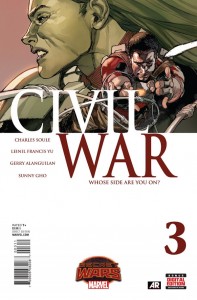 As usual, let’s start with the first half of the various Secret War tie-ins, in alphabetical order: Captain Marvel continues to be one of the better offerings, simply because it’s by its regular high-level creative team, and so watching Carol and her crew slowly 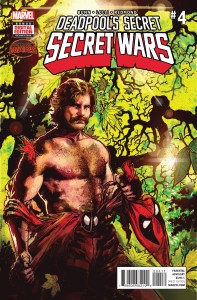 realize they’re all being played, end up in aerial dogfights and then get ready to throw down with a bunch of Thors is snappy fun that feels like just an extension of the regular title. Civil War doesn’t have that recent continuity, and so its Elseworlds version of a world where the heroes were manipulated into an extended fight (and a permanently divided country) has no built-in audience. Fortunately, it’s able to create one with some clever ten-years-later plotting, like a grown-up Speedball and a Kingpin/Octopus mashup, although it still seems to be taking forever to reveal its master manipulators — especially if they’re the obvious choice, the Skrulls (if so, the creators missed a major 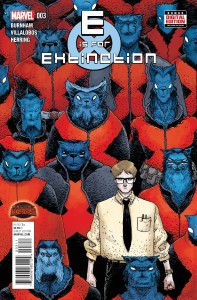 opportunity to plant a clue about that with a death in this issue…). Deadpool solves the reader relevance problem, typically, by changing the rules: his series isn’t about the current Secret Wars, but about the 1980s one, and retconning him into that action, giving the creators a chance to revisit key scenes from that now-classic tale, is surprisingly effective; the conclusion this week gives Wade a chance to experience both pathos and a little heroism among all the snark — and even shows the moment when he first realized that the whole Marvel Multiverse was actually a comic book, so it’s another issue that regular fans of the character probably should want.  E is for Extinction continues to take one of the most 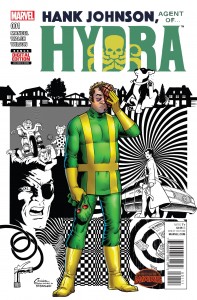 difficult X-Men eras to follow up on — the Grant Morrison/Frank Quitely one — and do it very well, thanks partly to a script that utilizes most of the characters and Morrison story elements fondly and with some humor, and especially to the Villalobos art, which echos some of Quitley’s quirks while mixing in its own indy sensibilities (look at that cover, for example… and, as always, click on it to see a larger version). Some of the best tie-ins have been the one-shots (Howard the Human and Secret Romance), and Hank Johnson, Agent of Hydra continues that pattern — it’s about a low-level henchman living in a Hydra community, and offers a quietly-funny (and sometimes slapstick) script and the wonderful art of Michael Walsh, who helped make the last run of Secret Avengers such a pleasure. Pick it up: it’s only a one-issue commitment, and well worth the time. 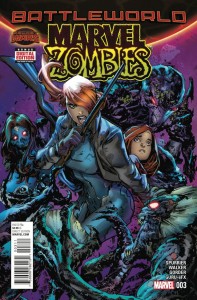 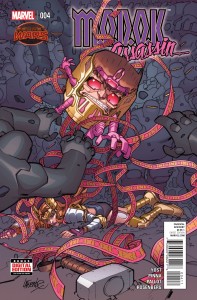 … and here’s the second half of the SW mini-series. Marvel Zombies has the requisite walking dead, but its real focus is British monster hunter Elsa 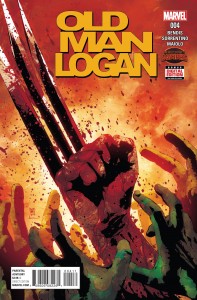 Bloodstone, whose abundance of snark, daddy issues and top-notch ass-kicking make her a fascinating character; it’s also got a last page that gives readers a compelling reason to return for the finale next month.  M.O.D.O.K.: Assassin‘s title character is fascinating, too; he’s mostly played for laughs here (as everywhere, for the last few years), but there’s a touch of angst to him, and to his (mostly) unrequited affection for Thor Angela, his reluctant partner in mayhem, that elevates this above just simple bloody slapstick.  Old Man Logan keeps 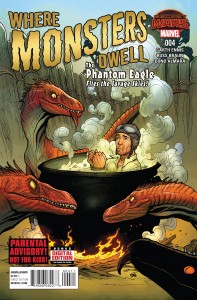 getting noticed because, after the SW dust settles, he’ll be the “regular” Wolverine; here, Bendis and Sorrentino put him through his paces as he battles a bunch of zombies (more than in Marvel Zombies, in fact), is befriended by a She-Hulk, and eventually gets in position to be with the other “real” (i.e., Earth 616) Marvel characters, just in time for the book’s conclusion next issue. After Deadpool, Where Monsters Dwell may be the least Secret Wars-y of the Secret Wars tie-in; it could be happening anywhere (well, anywhere with islands with warrior women 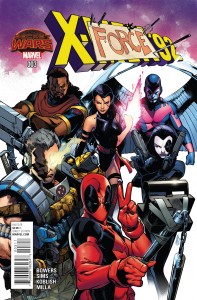 and prehistoric monsters, but, you know: s.o.p. for the Marvel universe…); no worries, though, since the Ennis/Braun team makes its story of a WWI flying ace who’s more than a little bit of a chauvinist jerk, and continually gets his comeuppance, a darkly funny satire. Its combination of humor with a semi-serious theme gets echoed in X-Men ’92, whose villain, psychic (and sister to Professor X) Cassandra Nova, is brainwashing the mutants to follow her own rigid ideas about morality and playing nice with others; she’s like Cathi Herrod as a super-villainess. 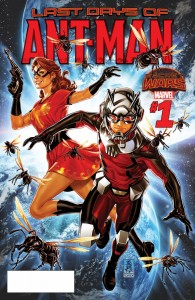 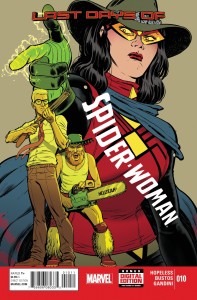 before the apocalyptic collision of dimensions that led to Secret Wars, in the Florida milieu where the last couple of Scott Lang books have taken place, and manages to give its sorta-loser hero a moment of… not exactly triumph, but at least satisfaction, right at the end. Spider-Woman is a final before-the-apocalypse issue, too, and wraps up its character’s odyssey with reporter Ben Urich and trying-to-reform villain The Porcupine, just before Black Widow shows up to try to get her to help save the world instead; it’s 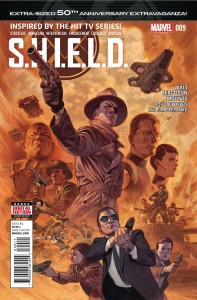 as well written and character-centric as always.  S.H.I.E.L.D. is a 50th-anniversary issue, double-sized for $5.99, and has a 43-page main story that harks back to a never-before seen Jack Kirby two-page “pilot” presentation of the Nick Fury/S.H.I.E.L.D. concept and, in typically-clever Mark Waid fashion, incorporates it into the story; it also has the return of Dum Dum Dugan and Jasper Sitwell (albeit in vastly different incarnations), to help set up a very different Howling Commando team for future issues,  and ends with a reprint of Strange Tales #135, the book that started it all. 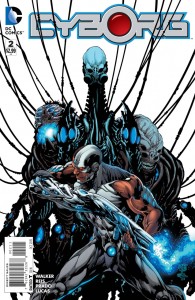 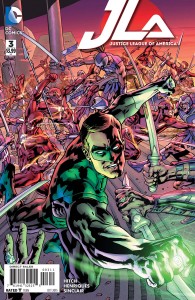 Five of DC’s recent launches: Cyborg is still suffering a little from its writing-for-the-trade structure, but 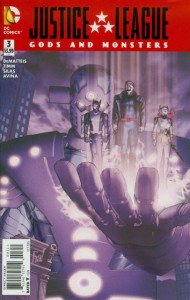 gets more movement on its alien-tech reinvention of the title JLA member into this issue, and adds a little more characterization; it looks like it’ll be ramping up considerably next month, though, so it still gets the benefit of the doubt for now.  Justice League of America is all Brian Hitch, and up to now it’s been great art and so-so story;  that gets a little better this issue, as he uses a classic split-up-the-team plot to get Flash and Green Lantern together on an alien planet with a 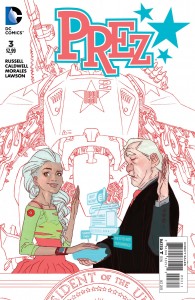 surprising identity, while Superman and Batman wrestle with the effects of the Krypton god Rao apparently being on Earth. It still seems like a too-packed story, but it sure looks pretty. JLA: Gods and Monsters concludes its look at an alternate-Earth Batman/Superman/Wonder Woman triad with this issue: just enough to set up its darker versions of the main characters, give them a first mission and whet readers’ appetites for more. Prez, meanwhile, is probably the new series most likely to be cancelled, and least deserving of that fate; after a slow-moving 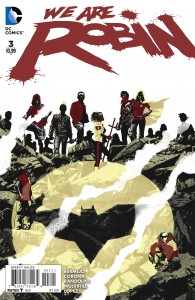 first issue (that short-sighted “writing for the trade” mentality again), it’s turned into a sharp, confident satire of American politics and industry that reminds me a little of Steve Gerber’s original Howard The Duck. Buy it and appreciate it fast, though, or it’s going to disappear. We Are Robin has a good idea — the multiple-Robin street crew recruited by a mysterious figure to protect Gotham in Batman’s absence — and some decent characterization (including a poignant sacrifice), but it’s hobbled by just-OK art and a “surprise” ending that reveals the “mysterious figure” as exactly the person we’d all expect it to be (also, there are no creator credits for this issue — not exactly a sign of editorial competence…). 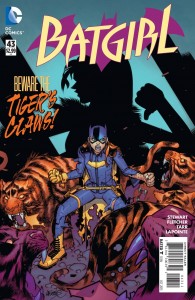 Two other DC books: Batgirl continues to be a sleek, 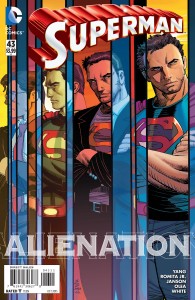 modern, female-friendly take on the character, and a deserved hit with both critics and regular readers, and this first issue of a new arc is a great place to try it out. Superman, meanwhile, is in the middle of showing us how Clark got to his current over-exposed and under-powered fugitive status, with this issue shedding more light on just why Lois revealed his secret identity to the world; it’s got a sharp script, and as long as the always-wonderful art of Romita Jr. and Janson is illustrating it, it’ll be worth reading. 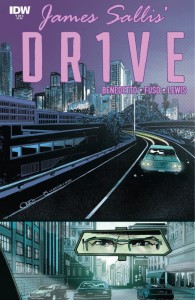 The indy number ones for the week: technically, Drive is James Sallis’s Drive, indicating that it’s an adaptation of the original story about a guy who hires out as a driver for criminals, and not the movie that also used that source material 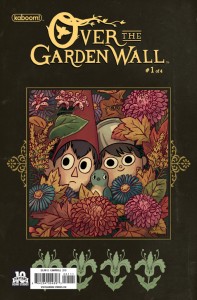 (thus, the characters in the comic don’t resemble the movie characters). It’s all a typical noir piece, though, with the driver one of those loner bad guys who’s not really bad; he just lives outside the law, by his own code of conduct, even after he ends up in a caper that goes horribly awry. It’s pulpy fun, although the kinetic auto action of the movie is hard to translate into the static pages of the comic (and it’s worth noting that author Sallis lives here in the Valley…).  Over the Garden Wall is a spinoff of that well-regarded Cartoon Network mini-series from last year, about two brothers traveling through a mysterious enchanted forest trying to get home; it’s by that show’s creator, Pat McHale, so it retains the offbeat mysticism and misty, wistful tone of the original, as it fills in some gaps and “in-between” incidents from the story. Stringers is about two guys who drive the streets 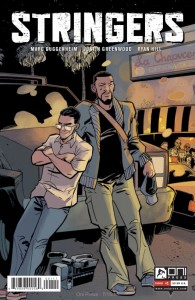 of LA looking for crimes and accidents to film, so they can sell the footage to TV networks; if that sounds like the plot of the movie Nightcrawler, writer Guggenheim says in the book itself that he’s been developing the story independently for ten years, and has never seen it. In fact, the story has no similarity in tone to the film, which was very dark, both psychologically and in its settings; this is more of a buddy picture wrapped around a crime drama, with a lot more humor, and it’s helped by Justin Greenwood’s art (he’s covered similar noir territory with Greg Rucka over in Stumptown, so he knows his way around the material). 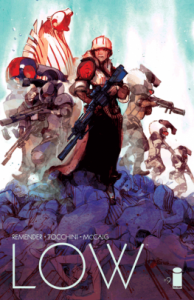 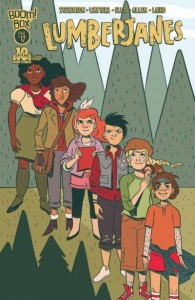 Everything else that caught my eye. Low is Rick Remender’s sf meditation on optimism in the face of despair, with a dying Earth civilization that’s living deep in the ocean, Earth’s surface having been 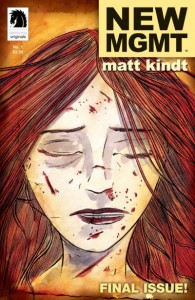 ravaged by an expanding sun; it’s distinguished by Tocchini’s detailed, dreamy art and Remender’s knack for characterization and sudden violence.  Lumberjanes completes its latest arc with its usual kid-friendly style and charm, even as it expands the mystery of just who the Lumberjanes are, and what’s going on with the supernatural forest

where their campground is. Mind MGMT ends its long run (1,028 pages, Kindt says in a well-deserved victory-lap editorial at the end) with a relatively-quiet coda that shows how much its main character, Meru, has grown over the course of the story; it’s one of the more impressive efforts of the last couple of years, and is going to make a killer omnibus when it’s all collected into one volume.  Ragnarok is Walt Simonson doing an end-of-the-world Thor story, and concludes its introductory volume with this issue; none of you are reading this comic, and all of you should be.

With 40 years of experience in comic reading, collecting and reviewing, English Professor Phil Mateer has an encyclopedic mind for comics. Feel free to ask Phil about storylines, characters, artists or for that matter, any comic book trivia. He will post your questions and answers on the AABC blog. His knowledge is unparalleled! He is also our warehouse manager, so if you are looking for that hard to find comic book, ask Phil!
View all posts by Phil →
This entry was posted in New Comics, Reviews and tagged Ant-Man, Batgirl, Captain Marvel, Civil War, Cyborg, Deadpool, Drive, Justice League, Low, Lumberjanes, M.O.D.O.K., Marvel Zombies, Mind Mgmt, Old Man Logan, Over the Garden Wall, Prez, Ragnarok, Robin, S.H.I.E.L.D., Secret Wars, Spider-Woman, Stringers, Superman, X-men. Bookmark the permalink.