Besides Marvel’s usual Secret Wars entries (this is going to be over soon — right, guys? Guys…?), DC releases a number of annuals this week (a traditional midsummer move), and then there are the usual cool indy books, including new issues of Casanova, Sex Criminals, Low, Powers and Sabrina. Let’s look…. 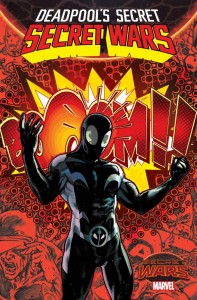 Age of Ultron vs. Marvel Zombies tries hard to be the everything-but-the-kitchen-sink carnival ride that the title suggests: it opens with a Puritan version of the Punisher, and the main character is an 1800’s-Western version of Hank Pym; we also see more about life on the other side of The Shield, and how the non-robots/non-dead people manage to survive. What we don’t get is the battle suggested by the book’s title; instead, there’s a kind of super-villain team-up vs. the good guys. It’s all entertaining enough, and Pugh is a good choice as artist (he can do the high-tech Ultrons and the rotting zombies equally well), so this continues to be an above-average Secret Wars series. Meanwhile, Deadpool’s Secret Secret 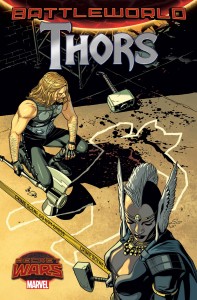 Wars isn’t a tie-in to the current series at all; instead, it harkens back to the ’80s original series, the one that started the Marvel-crossover genre, and inserts our snark-mouthed mercenary into the events there. This is reasonably fun, assuming that you’ve read the original and don’t mind Wade’s Zelig-like presence — in this issue, for example, we see how he was actually responsible for the creation of Venom — although if you’re the kind of fan who treats those thirty-year-old stories as canon, the retcons here might be bad for your digestion. Like Deadpool, M.O.D.O.K. doesn’t take itself too seriously, and its title character’s awkward 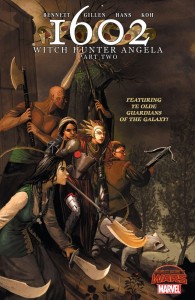 attempts to romance an Angela version of Thor (in between lots of killing — they bond over their mutual lethalness) eventually becomes kind of cute. Thors is a darker tale — it’s essentially a police procedural, with the title characters looking into the deaths of a number of women on Battleworld, all of them named Jane Foster, except that because of Doom’s machinations none of them know why that name is important — although Aarons does generate some amusement with all the varieties of the Thunderer, including the frog one, a werewolf named Thrrr, and a couple of others.  1602: Witch Hunter Angela has more on its mind than humor, too — although there’s some of that — as Bennett makes clever use of its 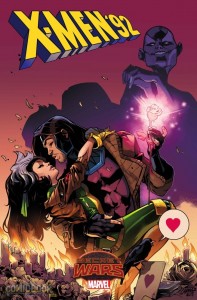 Elizabethan setting (including versions of Venom and the Guardians of the Galaxy) and Han’s painterly style gives an old-time fairy-tale style to the proceedings. Finally, X-Men ’92 has that year’s version of the mutants (circa non-adjective X-Men #1) under the sway of Cassandra Nova; it’s fun, too, as the writers psychoanalyze the characters, make some points about the hazards of moralizing and censorship, and manage to sneak in a couple of tributes to Chris Claremont’s scripting tics, including Wolverine calling people “bub” and using a “best there is at what he does” line, while Koblish’s art is good at handling all the many cast members, and just cartoony enough to move the story along clearly and smoothly. 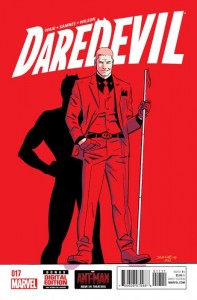 The other Marvel worth noting this week; as always, Waid and Samnee offer a good take on the Man Without Fear, as his uneasy alliance with the Kingpin goes off the rails (of course), and puts his friends in mortal peril.  As this team winds up its run, it’s worth noting how good they’ve been at combining classical and modern elements to create an effective superhero book; Matt Murdock and his crimson alter ego have been lucky to have a number of great creative teams over the years, and this has been another. 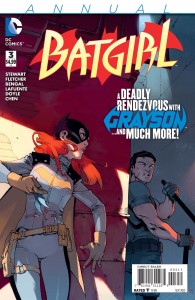 Annuals, if done right, can be special events — their longer page count gives their creative teams more room to breathe, while still being able to offer a complete story — and most of DC’s this week take advantage of that. Batgirl, for example, sees its regular writing duo coming up with an intriguing plot — Barbara and Dick Grayson are working the same case independently, except that she thinks Grayson is dead, so he can’t let her see him — and then enlists a number of guest artists to help deliver it, along with guest shots from Spoiler, Batwoman and the Gotham Academy crew (who, with their book’s modern, kid- 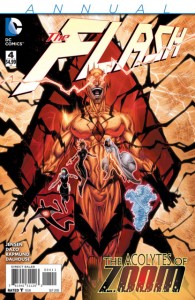 friendly style that’s so similar to Batgirl‘s, fit right in).  The Deathstroke Annual takes a different tactic — it leads out of events in Deathstroke #8, gives its mercenary title character and his guest-star there, Wonder Woman, a separate adventure, and then leads right back into the ninth issue of the regular title. Thus, you don’t have to read the annual, but it enhances events in the main book, adds some information about the two characters’ backgrounds, and makes some points about their similarities and differences as warriors.  The Flash Annual, on the other hand, serves as a prequel to coming events in its main title: it involves Zoom, the Reverse Flash, traveling through time and manipulating a number of super-powered people to become his disciples, 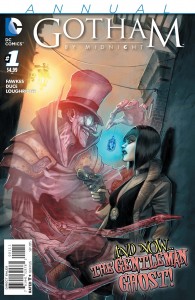 by lying to them about the “threat” posed to the world by Barry Allen; this way, when all these characters show up in the regular book, we’ll know who they are and what their powers and motivations are — if, that it, we read the annual (and, as the first appearance of all of these cast members, there’s always the chance that the book will go up in value somewhere down the line…).  The Gotham By Midnight Annual takes the solo, stand-alone route, as the city’s occult-investigation unit takes on the Gentleman Ghost, with Detectives Drake and Corrigan sharing the spotlight (Drake is partially seduced by the Ghost’s charms, and emphasizes with him, while Corrigan and his own inner spirit, The Spectre, have a decidedly different opinion). Fawkes, as he does on the main book, 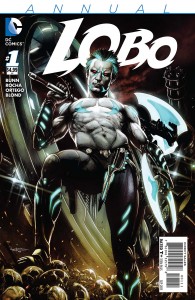 offers a good blend of police work and supernatural suspense, and Duce’s art is up to the task: it has some of Jim Aparo’s clarity and compositional strength, and has a couple of effective horror bits, too. The Lobo Annual, finally, goes all-out on connecting to its regular book, doubling down by giving its galactic bounty hunter a contract to kill Sinestro, and then offering a “conclusion” that leads into the next issues of both characters’ comics. It’s fine, although pretty much exactly the kind of brawl you’d expect between two such dark-and-gritty creations, and a canny marketing ploy, although not for readers who prefer an actual ending to their individual comics. 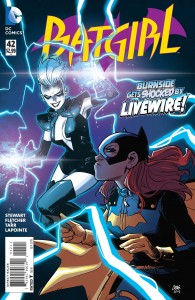 A couple of other, more normal-sized DC books — including 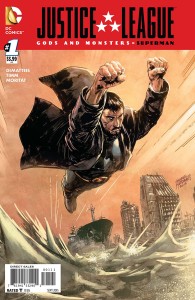 the regular Batgirl title, which continues to be a bright, snappy read, with Barbara confronting the new Batman (who, of course, is her father) and the two of them fighting Livewire (an inspired choice, since the book’s pseudo-manga style lends itself to a villain who began on an animated series). If you haven’t checked out this title yet, this is a good issue to sample, with a complete story and a full sampling of the creative team’s many charms.  Justice League: Gods and Monsters also has an animated pedigree (it’s a series of one-shot origin stories for the Elseworlds-type characters in the Bruce Timm animated movie that was just released on DVD and Blu-Ray this week), although, as last week’s Kirk Langstrom/vampire version of Batman showed, it’s considerably darker in tone. So too here, where the rocket from Krypton’s infant is found in a field by a family of migrant 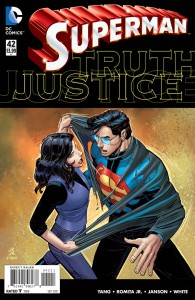 workers, so he grows up as a Hispanic kid in that setting. As you might imagine, this gives him a much more negative view of authority, and distrust of power and the “American way,” than the Kents instilled in “our” version, but his, and his family’s, essentially-decent nature still struggles through, and their journey is a compelling one.  “Our” Superman, meanwhile, continues his newest origin story in Superman #42, showing how he got to his current depowered-and-outed situation that’s being chronicled in both Action Comics and Superman/Wonder Woman; the Yang script is smart, both technically and emotionally, but the big attraction continues to be the Romita Jr./Janson art: those two would make even a bad writer look good, so having a decent one is  just a welcome bonus.

This week’s indy lineup, including two delayed books by Matt Fraction, Casanova and Sex Criminals, which both have welcome returns. Casanova continues to be in a deliberately-less-pyrotechnic tone than its earlier volumes, as its amnesiac hero can’t do any dimension-jumping (he 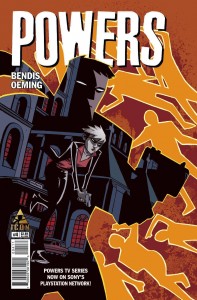 doesn’t even know he can) and ends up working as a bodyguard for a Hollywood bigshot with his own mysterious past; this lets the book focus on smaller, more human elements, even as multiversal forces begin to gather to eliminate him, and as always Moon makes everything look wonderful, whether it’s a simple conversation or an attempt at magical assassination. Sex Criminals has a similarly-good-looking style, with Zdarsky offering art as clean and well-composed as Moon’s and doing his own coloring; the comic is sealed in a bag because (a) the alternate cover, by Bryan Lee 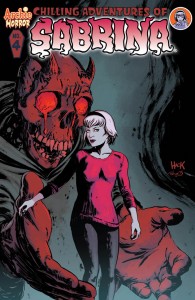 O’Malley, is both charming and most definitely NSFW, and (b) the regular cover offers about a 1/35 chance of getting a special sketch from either Fraction or Zdarsky on it (I don’t know of any local winners so far, although if you poke around online you can find a number of lucky fans showing off the sketches they found after opening their bags).  Since the story’s beginning a new chapter with this issue, it’s a good time to check out the book anyway, with the possible sketch just an added incentive. From non-Fraction writers, there’s Low, by Rick Remender; it has a high-concept sf plot about an expanding sun forcing mankind undersea in the far future, but it’s really about 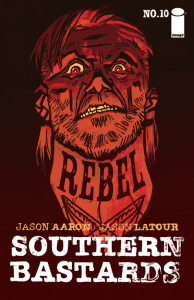 hope in the facer of despair, and that gives it more gravitas than most books. Stir in the Tocchini art, which gets more accomplished each issue (his last page reminded me of Fiona Staples in Saga), and this is a comic worth following.  So too for Powers, especially for any fans of the TV series: Bendis and Oeming are in the middle of a longer story in this issue, and it offers a good taste of their easy collaboration — but, if you really want to dive into the Powers universe, there are over a dozen classic trades of the series already available, with Who Killed Retro Girl? the place to start.  Sabrina continues to offer surprisingly-effective, atmospheric and deadly-serious horror, while Southern Bastards delivers unsurprisingly- 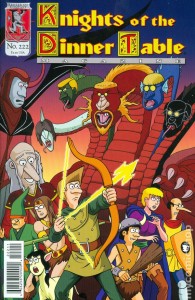 effective Southern Gothic, with Aaron an expert at dialing it up to a B-movie-ish 11 as Esaw, the assistant high school football coach, becomes spectacularly unravelled at a preacher who calls on him.  You either take to this kind of cinematic excess or you don’t; buy this issue and see.  That leaves just enough room for Knights of the Dinner Table, a very specialized but long-running book (222 issues!) about gamers that manages to combine really cheap-looking, computer-duplicated art with masterful storytelling. If the cover price of $5.99 puts you off, look for random back issues for 99 cents each in the “K” boxes at our discount hub, and see if these characters don’t start to grow on you….

With 40 years of experience in comic reading, collecting and reviewing, English Professor Phil Mateer has an encyclopedic mind for comics. Feel free to ask Phil about storylines, characters, artists or for that matter, any comic book trivia. He will post your questions and answers on the AABC blog. His knowledge is unparalleled! He is also our warehouse manager, so if you are looking for that hard to find comic book, ask Phil!
View all posts by Phil →
This entry was posted in New Comics, Reviews and tagged Age of Ultron, Batgirl, Casanova, Daredevil, Deadpool, Deathstroke, Flash, Gotham By Midnight, Justice League, Knights of the Dinner Table, Low, Marvel Zombies, Powers, Sabrina, Secret Wars, Sex Criminals, Southern Bastards, Superman. Bookmark the permalink.