We’re breaking the pattern of starting with Marvel’s Secret Wars tie-ins this week, to acknowledge the last issue of Fables, DC’s long-running Vertigo title about fairy tales living on Earth (and, before you accuse it of ripping off TV shows like One Upon a Time or Grimm, do the math: it was around long before they were). The collected trade editions of the series, all in print, total 21, and this is the 22nd: it’s a full trade by itself, stuffed full of all-new story and art (the main story concludes by the regular team, and then there are a ton of extra short pieces, by artists including Neal Adams, Michael Allred, Terry and Rachel Dodson, Peter Gross, Joelle Jones and a host of others), so the $17.99 price isn’t out of line. As a well-deserved celebration of a smart, engaging, always-beautifully-drawn series, it couldn’t be any better. 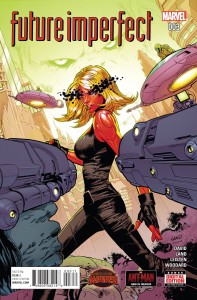 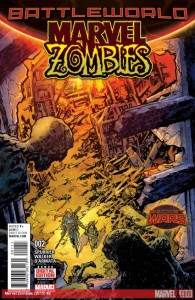 Now we get to the Secret Wars offerings (and a smaller week for them than the last few). E Is for Extinction follows the X-Men from the early Grant Morrison era, and continues to be a good use of the SW concept: slyly funny, with some big concepts and lots of action, and Villalobos doing a meditation on Frank Quitely’s style without just aping it. If you were a fan of the originals (and, really, why wouldn’t you be?), then this should be enjoyable too. Similarly, Future Imperfect is for fans of the Peter David Hulk, especially his far-future Maestro

incarnation, as that character schemes to take over Battleworld from Doctor Doom. Given Doom’s omnipotence, that’s not going to end well, but with David it’s all about the journey, and the small bits of characterization and humor along the way; by those standards, this book offers a fun trip.  Marvel Zombies has Elsa Bloodstone and a mysterious child trekking through the undead-infested lands beyond Battleworld’s Shield Wall.  She’s an engaging character, sarcastic and conflicted and deadly in her own right, and it 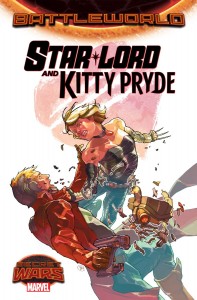 helps that this is only a three-issue series; the shorter story space speeds the plot along energetically, and keeps the encounters with various zombie-fied bad (and, formally, good) guys moving briskly.  Meanwhile, Old Man Logan continues educating that alternative-future Wolverine character about Battleworld and introducing him to alternate versions of the X-Men and Avengers he’s known; given that he’s apparently going to become “the” Wolverine after all the Secret Wars dust settles, this bears watching, especially given the Bendis script. Star-Lord and Kitty Pryde is pretty much an episode of 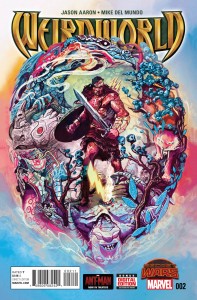 the ongoing Star-Lord title, especially since its Peter Quill is one of the refugees from the “old” Marvel universe, and not an alternate-timeline doppleganger — unlike the Kitty he meets here, who’s never encountered him before — so if you’ve been following that book, get this one too. That leaves Weirdworld, a typically-amped-up Jason Aaron story with a high-fantasy tone, involving the barbarian warrior Arkon, dragons, ogres — and, of all things, characters from the early-’80s Crystar, the Crystal Warrior, one of those toy tie-in series so popular back then; the five other people in the world besides me who remember that comic will be thrilled…. 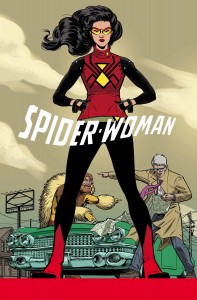 The other Marvel books of note: Hawkeye is the new ongoing series (the “old” one having finally ended just last week), and, while it doesn’t hit the heights of its predecessor, it benefits from Lemire’s confident and experimental storytelling, with a two-tiered page that follows the young Clint and Barney Baxter as they join a shady traveling 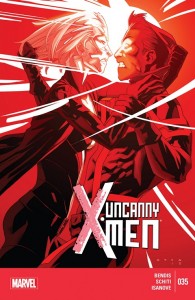 circus (done in pastels that duplicate the nostalgiac haze of memory) and simultaneously depicts the current-day Clint and Kate Bishop (the “other” Hawkeye) on a case, rendered in a much more crisp, David Aja-esque style; as always, it continues to be a tribute to artist Perez that he’s able to handle two such different kinds of art so effortlessly. Spider-Woman is another book that uses the modern Marvel style: confident, clear, and colorful, it just zips along, portraying its heroine as confident and exciting and fun, and fans of She-Hulk, Daredevil or, yes, Hawkeye should be reading it too. 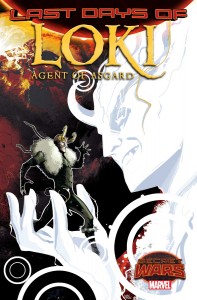 Uncanny X-Men #35 is the last of that Bendis-written title until sometime in October, when Uncanny X-Men #600 comes out and wraps everything up.  This issue sees a death of one of the newer mutants, and an ending that gets everyone in one place for the finale; I miss Chris Bachalo on the art, although the current replacement has a clear, easy-to-like style (and I admire the courage of someone with the last name of “Schiti” becoming an artist at all, with all the opportunity for snarky bad puns that it provides).  Loki, meanwhile, is one issue from its end, as to the gods of Asgard  the universe-collapsing events that lead to Secret Wars are their Ragnarok.  Spoiler: everything dies — except, when you’re the god of stories, it doesn’t necessarily have to be that final…. 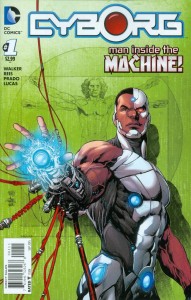 Two first issues from DC this week, both Justice League spin-offs. Cyborg follows, obviously, that character, as he tries to figure out why his tech is much more advanced than it should be; it turns out that aliens in “another galaxy” are involved. *Sigh.* I understand the impulse to upgrade/reinvent Vic’s power set, especially since parts of it that seemed futuristic in 1980 don’t do much to excite readers today, but launching with a first issue where he doesn’t do 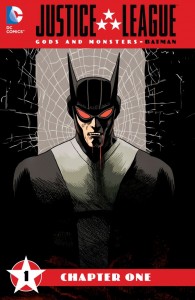 anything with them doesn’t seem to be the best way to grow an audience for the book; the slow build may work in the longer trade format, but if no one buys the comic, sales crash and one trade is all we ever get, it’s not gonna pay off well.  Justice League: Gods and Monsters is an Elseworlds-type series of one-shots, based on an animated feature coming out from Bruce Timm with darker, more vicious versions of the heroes we know — so, for example, in this issue we meet a Kirk Langstrom whose serum, instead of turning him into a Man-Bat, makes him vampiric; since there’s no Bruce Wayne-created hero in this world, he gets tabbed as “The Batman” instead, and presumably we’ll get similar origin one-shots for the more-monstrous Superman and Wonder Woman versions of those characters. 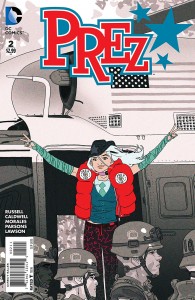 DC’s sophomore efforts for the week. Harley Quinn and Power Girl is a mini-series with those two characters in space, trying to help a planet based on ’60s concepts of peace and love (with an updated version of the old Superman cast member Vartox as its main hero) that’s being invaded; bummer, man — and if you want lots more ’60s-based groovy dialogue and references like that, well, there’s plenty here. Fortunately, the Connor/Palmiotti/Gray team has a smooth, easy storytelling style that makes it all more amusing than annoying, and of course Harley, as DC’s answer to Deadpool, can’t help but add some meta snark to the proceedings that 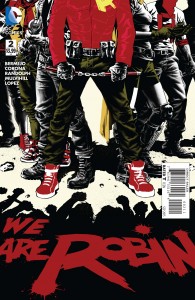 makes it go down even easier.  Prez seems to have a better hand on its political satire in this issue than in its first one, with a better selection of targets and a better aim at them, and by the last page our teen heroine has actually been elected President. The question is whether she’ll have anything interesting or amusing to do, and that’s going to take another few issues to answer. Same for We Are Robin, with its vigilante-group setup: after this second issue, our main character has become one of the Guardian Angel-like Robins. Will his adventures be exciting enough to bring readers back? Check in after a few more months to see.  So far, its one disadvantage is that it’s so deadly serious all of the time; it could could use some of Prez‘s light tone. 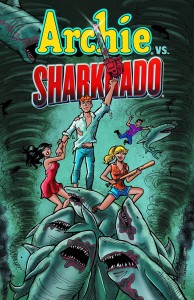 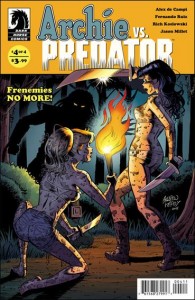 Everything else: Wolf is Ales Kot channeling Neil Gaiman circa American Gods, with its LA characters driven by the power of myths and folk tales; with Zero and the more recent The Surface and Material and now this, he’s developing a reputation for brainy, high-concept sf,  dense

plotting and multiple points of view that reminds me of John Brunner’s Stand on Zanzibar.  Archie vs. Sharknado and Archie vs. Predator are, technically, sf too, but on a much less ambitious scale, with the Predator book going for the source material’s B-movie buzz and killing off half the cast, continuity be damned. Parent and Ruiz are probably the top Archie Classic artists right now, so the books undeniably look good. Finally, Stray 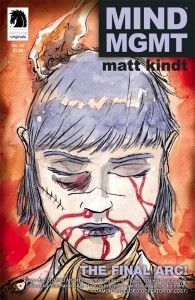 Bullets and Mind MGMT are both long-running suspense books, with Stray Bullets leaning toward ’80s-set hardboiled crime drama and Mind MGMT aiming more for psychedelic, psychic-powered James Bond action.  With only one issue left, it’s settling its characters’ accounts, busily resolving loose plot threads and barreling towards a resolution. Stray Bullets, which has now been around for decades, seems no closer to delivering its main characters to their eventual fates, and looks capable of cheerfully continuing to chronicle their tangled fates for decades more; I’m looking forward to it.

With 40 years of experience in comic reading, collecting and reviewing, English Professor Phil Mateer has an encyclopedic mind for comics. Feel free to ask Phil about storylines, characters, artists or for that matter, any comic book trivia. He will post your questions and answers on the AABC blog. His knowledge is unparalleled! He is also our warehouse manager, so if you are looking for that hard to find comic book, ask Phil!
View all posts by Phil →
This entry was posted in New Comics, Reviews and tagged Archie, Cyborg, Fables, Harley Quinn, Hawkeye, Hulk, Justice League, Loki, Marvel Zombies, Mind Mgmt, Old Man Logan, Prez, Robin, Secret Wars, Spider-Woman, Star-Lord, Stray Bullets, Wolf, X-men. Bookmark the permalink.