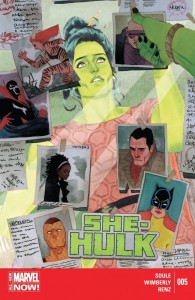 Four comics this week starring women — two superhero and two cartoony/kid-oriented. Superhero first: both of the 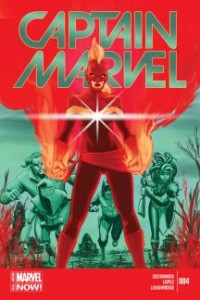 offerings here stand out because neither emphasizes the adolescent-male-fantasy demographic of, say,  DC’s “Bombshell” covers; these are fully-realized characters, not shallow shells. She-Hulk has the most interesting — and maybe divisive — art, as fans may miss normal artist Javier Pulido; guest artist Ron Wimberly has a much sketchier, more distorted line than his, and readers who demand realism with their superhero art will be put off by it (although, come to think of it, people like that probably aren’t reading this book anyway…). Soule’s story continuers to shine, though, as Jen and company investigate a mysterious old case that has a toxic effect on anyone 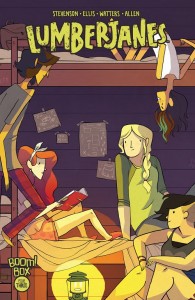 who hears about it; it’s a clever script that emphasizes thoughtfulness and humor over punching, intrigues the reader, and ends on multiple dramatic cliffhangers: a combination that makes this one of the better books on the stands. Captain Marvel has great writing, too — Deconnick continues to grow as one of our better newer writers, with a firm command of character, humor and clever plotting — and Lopez’s art is very solid; his ability to render expressive faces and credible, interesting aliens reminds me of Fiona Staples. Striking coloring by Lee Loughridge (and, hey, I should have mentioned Rico Renzi’s coloring on She-Hulk, which is equally effective),

and a psychedelically-hued cover that just leaps from the stands help to complete the package (one oddity: the character’s costume on the cover is nothing like anything she’s worn before, or anything she wears on the comic:  careless editing, that…).  As for the younger-reader books, both involve women creators who come from the world of animation: Lumberjanes, on its third issue, has already established itself as a quirky cult hit; it’s about a troop of girls at a summer camp where lots of weird things happen; the kids are sharply-realized, clever and funny and brave, and so is the story, which puts them through a series of mental and physical challenges to get out of a mysterious cave. Bee and Puppycat will be most appreciated by fans of Adventure Time: its creator, Natasha Allegri, has worked on that cartoon (among other things, she created Fionna and Cake), and B&P was first an animated short that then got funded through Kickstarted into a larger series; Bee is a girl who works lots of weird temp jobs (in this issue, she has to repair a music box on a snowglobe planet — and the book’s cleverness is shown when, as she plays a number of music boxes there, the art embeds those barcode things that, when scanned by a smartphone or tablet, play the actual music), and Puppycat is her pet/partner, a talking, magical combination canine/feline. The art has a big manga influence, many full-page, striking visuals, and the same assured combination of whimsy, menace and heart that’s made Adventure Time such an all-ages hit.

Edgar Allan Poe’s Morella and The Murders in the Rue Morgue #1 (of 1) — Creator: Richard Corben 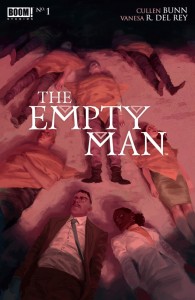 A quartet of first issues — one sf, two horror and one comedy. Wildfire is the science fiction, a decent near-future tale of a genetically-modified crops experiment that runs amok in LA; Hawkins gets credit for a smart script that bends over backwards to give both sides of the GMO debate a voice (although that makes the first couple pages of the book slow going, as he uses a talk-show debate to lay out the arguments — but that’s to be expected in a first issue), and the whole thing’s cleverly done, with a couple of nice graphics effects by Sejic. Empty Man is horror, about a psychological disease that 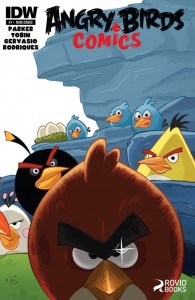 causes existential despair, hallucinations and suicide, and, as CDC and FBI researchers try to track down it and its victims, starts to mutate into something even worse; Del Rey has a minimalist, bleak style that fits the material well, and Bunn gives her enough to do with it to make this an effective first issue. Angry Birds is the kids’ book/comedy, and it’s pretty much exactly what you’d expect it to be, with three short stories of the agitated avians and their porcine antagonists, all meant for younger readers (who won’t notice that it’s arriving at least a couple of years past 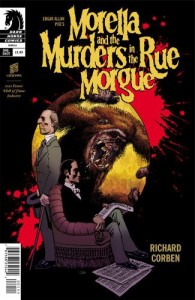 its prime); it’s the kind of thing Gold Key or Charleton might have delivered about similar fads in the ’60s or ’70s, and harmless enough. Finally, the Corben Poe book continues his set of one-shots adapting, by now, almost all of EAP’s work (he’s also managed most of Lovecraft’s); it’s the most known quantity here, since readers should be familiar enough with the artist’s air-brushed, meticulous style and sensibility to know whether they’ll like it, but anyone who hasn’t seen his work before now should definitely check it out. 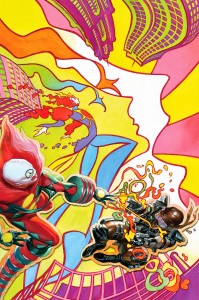 This is one of those dependably-excellent comics, especially in a done-in-one-issue story like the one here: Busiek and Anderson have the casual mastery of experts, covering one day in the title city when a god shows up, and juggling time and multiple storylines so easily the reader barely appreciates how difficult a feat they’re pulling off. Extra points for Anderson’s ability to draw so well in a number of different styles, for Alex Ross’s Peter Max-ish cover, and for Busiek’s matter-of-fact diversity. 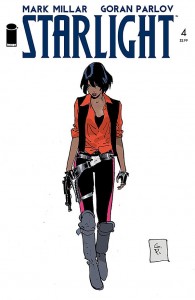 This story, about a Flash Gordon type who wasn’t believed about his adventures when he returned to Earth, grew old there, and now has returned to the alien planet that needs him, has settled into a predictable Millar plot, but continues to be distinguished by Parlov’s Moebius-inspired space-adventure art, which offers more than enough reason to buy it. 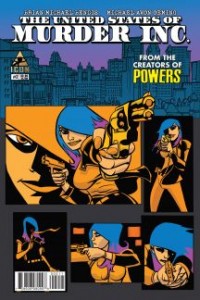 The Powers team has launched this new book, about an alternate-future US where the Mafia’s five families have taken over most of the East Coast, and reached an uneasy detente with the federal government — but the main character, who’s just become a made man, is having his loyalty challenged…. It’s the same crime noir as Powers, but minus the superpowers, and from the perspective of the bad guys instead of the cops; fans of crime books, Powers, or Bendis and Oeming should all check it out. 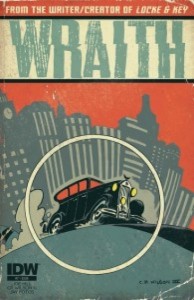 This is a coda to this book’s previous six-issue main story, telling the story of of the con artist who ruined Charlie Manx’s life by getting him to invest in a Christmasland amusement-park swindle, and turned him into the title monster. More an illustrated novella than a true comic, it’s very good, using a rare second-person narration style (“You are six steps into the water before Flynn begins screaming…”) to plop us into the character’s head, get us to empathize with him, and feel his growing horror and despair at the end; you don’t even have to have read the rest of the series to appreciate it. 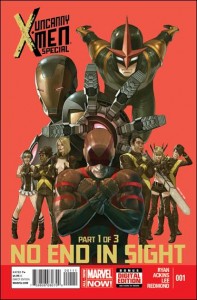 This is actually one of Marvel’s summer-annual crossovers, the first of a three-part tale which, to tell by the cover, will then be continued in Iron Man and Nova specials (not that there’s any editorial material, or even advertising, in the book itself to explain that, or direct readers to the next installments: what’s up with your editing this week, guys?). It’s not by the book’s regular creative team, and is a fairly generic tale about Cyclops getting kidnapped by the robot Death’s Head and taken into space, where the X-kids have to try to rescue him. They don’t, but they meet Iron Man, who offers to help. The end. That’s not much for your $5, but if you’re planning on buying the other two heroes’ specials, or just can’t get enough of these characters, then here you are.

With 40 years of experience in comic reading, collecting and reviewing, English Professor Phil Mateer has an encyclopedic mind for comics. Feel free to ask Phil about storylines, characters, artists or for that matter, any comic book trivia. He will post your questions and answers on the AABC blog. His knowledge is unparalleled! He is also our warehouse manager, so if you are looking for that hard to find comic book, ask Phil!
View all posts by Phil →
This entry was posted in New Comics, Reviews and tagged Angry Birds, Astro City, Bee and Puppycat, Captain Marvel, Empty Man, Lumberjanes, She-Hulk, Starlight, United States of Murder Inc., Wildfire, Wraith, X-men. Bookmark the permalink.