Let’s try looking at all the non-mainstream-superhero stuff first this week, and then the DC and Marvel offerings: 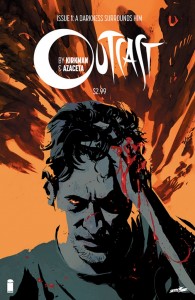 Kirkman’s new monthly comic series got a nice writeup in Tuesday’s USA Today; that’s what originating a number-one cable hit like The Walking Dead will do for you. It’s an Exorcist riff, about a guy who dealt with demonic possession as a kid (him? His mother? Much later, his wife? It’s only the first issue, so the backstory isn’t clear yet), and now, a damaged adult, reluctantly helps others with similar problems. Kirkman’s skill at crafting sturdy plot structures and characters serves him well here, although it’s familiar ground (early John Constantine Hellblazer books, or even early-’70s Marvel horror characters like Son of Satan or Gabriel, Devil Hunter, mined similar territory), and Azaceta proves a perfect partner, with creepy, shadowy art that delivers a couple of good, cinematic, Paranormal Activity-like scares. I’m a little bugged by the editorial, where Kirkman opines as how, unlike Walking Dead, which could obviously never happen, this exorcism/demon stuff is real, man — but then, I remember Doug Moench writing almost the same editorial along with the first or second Gabriel, Devil Hunter story, too, so maybe it comes with the job; in any event, I think a lot of the first-time readers of this book will come back for a second helping, and it will become at  least an Invincible-level success. 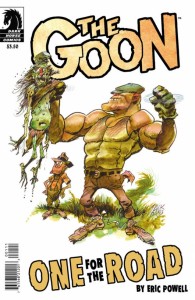 The title makes it sound like Powell is saying goodbye to this character (and it’s been a long time between issues, so maybe so…), but if this is the last Goon, it’s a good sampling of the book’s parodic, EC-ish charms; Jack Davis does the cover (an impressive drawing by someone who’s going to be 90 years old this year), and his easy connection with the material emphasizes just how much of an influence he and the others in Bill Gaines’s stable have been on Powell. The story itself doesn’t burn any bridges or wrap anything up — it’s a typical yarn about the boys befriending a sailor on leave and helping him look for his friend through an epic evening of bar-hopping; among other things, they run into the three EC horror hosts — but it’s a reminder of much hard-edged, high-octane fun this book has been for a long time now. 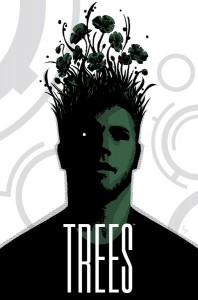 This is pages 21-40 of a serialized graphic novel, not a true comic series (there’s no attempt to explain what’s going on; if you didn’t read the first issue you’re just out of luck), but it’s a decent sf concept: huge, miles-high technological/organic poles plopped down all over the Earth ten years ago, an invasion by some alien culture, and have sat there inscrutably ever since. Ellis continues to explore the society and personalities around some of these “trees” — in Somalia, in Sicily and near the Arctic Circle — and Howard’s graceful art reminds me a little of the twin Brazilian brothers, Fabio Moon and Gabriel Ba; for only $2.99, this is a good deal — as long as you’ve read that first issue too. 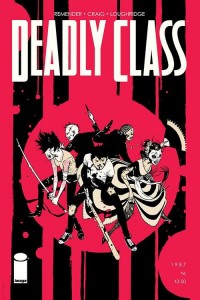 This comic about a late-’80s school for juvenile assassins ends its first arc, as the kids complete a Hunter S. Thompson-ish trip to Las Vegas, but with more actual bullets and blood. The junior-killers-school concept, which sounds so cartoony as a one-sentence summary, works surprisingly well in practice, somehow creating sympathy for Remender’s damaged protagonist while showcasing Craig’s knack for well-composed small-panel layouts and caricature; Lee Loughridge’s moody coloring completes a very stylish, professional-looking package, and an effective introductory story. 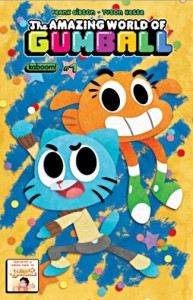 This is another Boom adaptation of a Cartoon Network show; between Adventure Time, Regular Show and others, they’r cornering the market on younger-reader books, and good for them: that group has been underserved for a long time. It’s a typical modern kids’ cartoon, in that the situations are standard school/home plots (here, the struggle to seem cool to your classmates), but dialed up to eleven, with all the characters various anthropomorphic animals, fruits or other objects instead. It’s fine for what it is, and if you know any 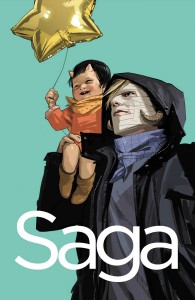 pre-teens, get them this; hook ’em on comics while they’re young. 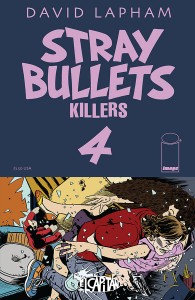 These are all indy books I’ve already talked about in previous reviews, and only have brief comments on now — although I’m still buying and enjoying them; they’re all good comics. Saga continues its 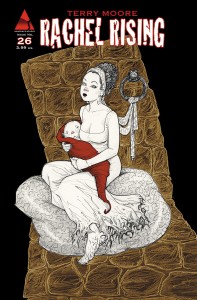 tale of star-crossed lovers; they’re trying to settle down and blend in, while finding out that the trials of domestic life — raising a young child, trying to earn enough money to get by, etc. — might be harder than the space-fugitive parts. It’s an extremely popular book, and for good reason: Vaughan and Staples are both at the tops of their games here. Similarly, Stray Bullets:Killers is evidence that Lapham hasn’t lost any steps in 20 years, and in fact has only gotten better: each issue is a carefully-built, stand-alone story, but also a jigsaw-puzzle piece of a sprawling, much 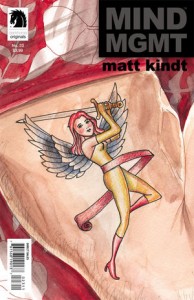 larger tale that spans decades, and follows its huge cast through different stages of their hardscrabble, guns-and-drugs-filled suburban lives. Get it; it’s very good. Rachel Rising is Terry Moore’s horror book, about, among other things, witchcraft, demonic possession, and the nature of evil; right now, it’s in-between arcs, with the characters still cleaning up from the first major story, and laying the groundwork for the next. Even in a relatively quiet episode like this, Moore manages at least a couple of good chills per issue, and both the art and character work are always excellent. Finally, Mind Mgmt continues to be itself: a paranoid, imaginative and deeply weird spy story. Only in comics could a single creator, with just art paper, a pen and some pastel coloring, craft a compelling, unique tale like this, and be able to get it out to an appreciative audience for over two years. 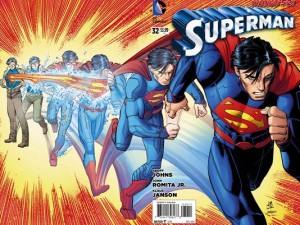 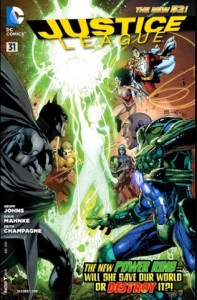 I bought three DCs this week — their three top regular-comic titles, as it happens, assuming that the new Superman creative team gooses the Man of Steel’s numbers high enough this month. It should; the Johns/Romita Jr./Palmer crew is the highest-profile set of creators on the Big Guy since… well, Grant Morrison and Rags Morales on Action, I guess; there’s Snyder and Lee on Superman: Unchained, but Lee’s lateness has caused that title to fall off everyone’s radar (it’s supposed to end with issue #9, but when the last few issues will actually appear is anyone’s guess). Little chance of that here, since the Romita Jr./Janson team are consummate on-time pros, a quality the artist presumably learned from his famously-productive father, and 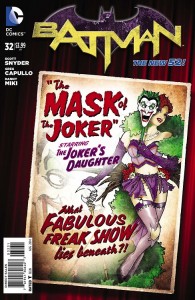 Johns is the same. This does what a new team should: it reintroduces us to the supporting cast, sets up a new character whose origin is a funhouse-mirror reflection of Kal-El’s, and gives the artists lots of opportunities to show their stuff. Newer readers who only know them from the relatively-realistic Kick-Ass won’t be surprised at how well they handle the day-to-day, Daily Planet parts, but might be impressed at how energetically the costumed-hero action sequences jump off the page; all in all, this should give new readers plenty of reason to come back. So too for Justice League, also by Johns (with longtime Green Lantern artistic partner Mahnke), as, finally on track again after the Forever Evil delays, we watch Lex Luthor pay a call on Bruce Wayne, to tell him he knows he’s Batman, and then watch the fallout as the deceased Power Ring’s evil piece of jewelry seeks out a new host: it all looks good, reads well, and is just the right mix of soap-opera, sub-plots and fan-centric superheroic developments to be a hit. Finally, there’s Batman, about to wind up the “Year Zero” story in another issue, as this one sets up a final confrontation with the Riddler, while the lives of everyone in Gotham City hang in the balance: go back and reread the last half of my previous sentence, and apply it here too. 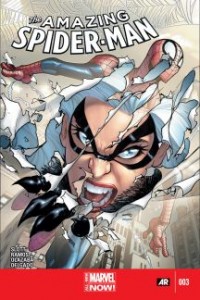 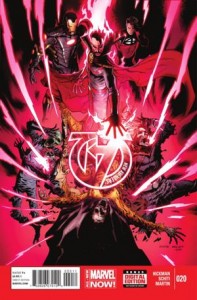 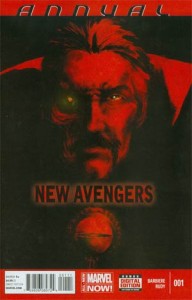 Finally, we get to the Marvel comics. Amazing Spider-Man gets the top spot, just because it’s been such a fun, fast-moving book since its relaunch, as Peter deals with over a year’s worth of Doc Ock messing up his life — and the Black Cat’s, too,  as she’s out for full-on revenge this issue; Ramos’s slightly-exaggerated art is the biggest attraction here, although Slott continues to offer well-pitched plot and character work. The main New Avengers book is good too, as the team fights a Justice League version from an alternate universe, and needs to destroy 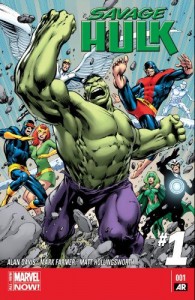 their planet to save our own; the pseudo-JLA’s reaction to our heroes as the villains is both dizzying and thought-provoking. The New Avengers Annual is for Doctor Strange fans, as it’s a solo story that shows what the new, darker version of the Doctor can do. Rudy’s full-page, stylish layouts are reminiscent of J. H. Williams III’s, and a major reason to get this comic. Meanwhile, Savage Hulk is an Alan Davis written/pencilled production, set in the late Silver Age period right after the X-Men fought him in X-Men #66 (their last comic with a new story until

Giant-Size X-Men #1 and X-Men #94); this first issue is what an X-Men #67 with a new story still guest-starring The Hulk would have looked like. Unsurprisingly, it looks very Neal Adams-y: sharply-drawn, expressive and attractive. The other Hulk book this week is the awkwardly numbered and titled Original Sin #3.1: Hulk vs. Iron Man #1, which involves Bruce Banner and Tony Stark exchanging memories (after the Watcher’s eyeball explodes 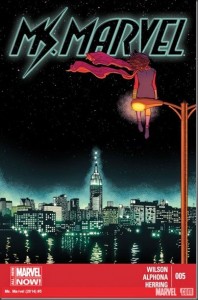 and scatters a bunch of past secrets/potential plots throughout everybodies’ books; yes, that’s the story hook for this year’s big Marvel summer crossover), and Bruce realizing that Tony screwed with his gamma-bomb test that originally created The Hulk. Maybe; this is plotted by both Hulk writer Waid and Iron Man writer Gillen, so the story’s likely to have more layers than it appears. More straightforwardly, Ms. Marvel continues the

origin story of its awkward-but-goodhearted teen hero, trying to balance early-Spider-Man learning-the-ropes stuff with casual diversity and a sprinkling of cultural commentary, and usually succeeding. That leaves Guardians of the Galaxy, currently in the middle of a frenetic story about the team getting captured separately, and then having to get out of various scrapes and reunite: come to think of it, not a bad sequence to show to any potential new fans in a month….

With 40 years of experience in comic reading, collecting and reviewing, English Professor Phil Mateer has an encyclopedic mind for comics. Feel free to ask Phil about storylines, characters, artists or for that matter, any comic book trivia. He will post your questions and answers on the AABC blog. His knowledge is unparalleled! He is also our warehouse manager, so if you are looking for that hard to find comic book, ask Phil!
View all posts by Phil →
This entry was posted in New Comics, Reviews and tagged Avengers, Batman, Deadly Class, Guardians of the Galaxy, Gumball, Hulk, Justice League, Mind Mgmt, Ms. Marvel, Outcast, Rachel Rising, Saga, Spider-man, Stray Bullets, Superman, The Goon, Trees. Bookmark the permalink.