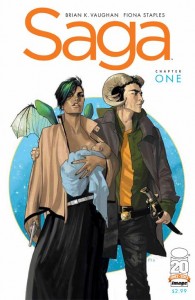 Vaughan’s last extended series was Y: The Last Man, so he’s got a reputation to uphold, and this debut issue does so nicely: it’s a fantasy/Star Wars/Romeo and Juliet mashup, with all the sprawl its name implies — but this first issue focuses very tightly on just two characters, and the third one they produce. It’s very well done, and Staples brings enormous talent to the drawing: she’s just the kind of artist I admire, able to work with small human expressions and double-page city-destroying splashes (with giant turtles added!) equally well. Get in on the ground floor with this book: it’s part of a current Image renaissance (with, say, Prophet), and it deserves to become a hit and have a long life; you’ll want to brag that you were one of the perceptive ones there from the beginning.

Yet another book this week with an indy-honed, skillful writer and a female artist who can draw emotion and action equally well, in a style like no one else’s: what are the odds? I’ll bet there will be fans who won’t like this book — Cloonan’s Conan won’t be… Conany enough for them — but they won’t be looking hard enough: this is a great version of the character, as compelling in its own way as Barry Smith’s, and the long Belit story is the perfect showcase for her and Wood’s talents; as with Saga, get in on the ground floor of this ride, before the books sell out and you have to wait months for a trade version. 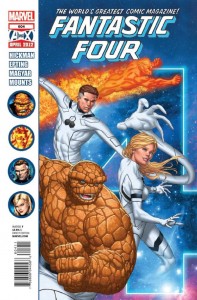 This wraps up a number of plotlines from… geez, over three years of Hickman’s work on this title and FF, so even if you haven’t been keeping track it’s worth a look: it’s very cosmic, in the classic FF mode, combining Celestials and time-travellers and massive power outlays, but, as the best FF stories do, it all boils down to family and loyalty in the end. I haven’t been as huge a fan of Hickman’s work on this book as some others — I’ve found a lot of his plotting too open-ended and scattered — but I have to admit that he stuck the landing on this one just right. 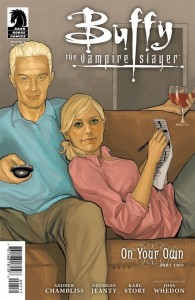 Buffy and Spike interact, as our heroine continues to deal with the aftermath of the death of magic from Season Eight, plus more personal crises that loom just as large — including a twist ending that is both completely unexpected and typical for this series. Even without Whedon providing a script (but still listed as “executive producer”), the comic continues to be reliably entertaining, especially to fans of the show — who should buy the book just because they’ll appreciate the quiet but striking Phil Noto cover so much. 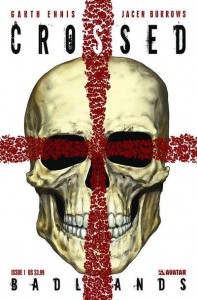 The original creative team returns for the first arc of this now-ongoing series about a not-quite-zombie apocalypse.  It’s nice to see Burrows’s steady, clear art again (its simple lines somehow give the graphic horror more impact), and of course Ennis is welcome, and yet this doesn’t feel much more than average — Ennis is so known for his over-the-top violence and weird humor, especially in this title, that it’s hard for him to startle or engage readers at this point; watching a hefty Scottish woman wearing nothing but a belt of human heads split open her two companions’ faces with an axe, and then get crushed by a log in a stream and strangled by a boot through her mouth, is just business as usual. When some depressingly existential musings by the narrator character are the only things that stick after reading a comic like this, you know the law of increasing expectations is haunting it even more than its monstrous title characters. 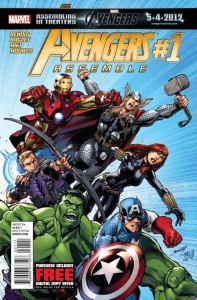 Three by Bendis: the new ongoing Avengers is, of course, a 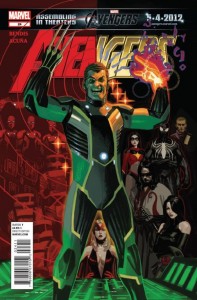 book for potential fans of the movie, and he and Bagley provide a suitable introduction, requiring little prior knowledge of continuity. Scorpio is kind of a boring opponent, frankly, and $3.99 for 21 pages of story (plus that Avengers vs X-Men preview that you’ve already seen, since it’s in every other freakin’ book this month) is pushing it, but the creative team has such an easy rapport that it all goes down smoothly enough.  The “regular” Avengers is the climax of a months-long Norman Osborn plot, and, after all the build-up, seems to end too quickly and easily, with a overload-the-system trick that’s been used many times before (and, hey, what about New

Avengers? Shouldn’t it have come out before this book?); it, too, is made better by Bendis’s light touch with dialogue, and ability to juggle dozens of characters and big secret-society conspiracies at once. The better comic is the simpler Powers, which just focuses on its three weary cops and their attempts to deal with both standard procedural police-department red tape and cosmic problems like somebody killing god-level superheroes; it’s Bendis’s longest ongoing title, a clear labor of love, and, while this is the middle chapter in an ongoing story, he and Oeming make their affection for its characters and their intertwined lives so obvious that readers can’t help but be swept along.

These three titles are linked only because they’re the least cookie-cutter, and therefore the best, of the week’s superhero titles. Wolverine and the X-Men was always going to be a hit, but it’s been an unexpected delight because Aaron has shown such a flair for both humor and interwoven continuity in chronicling the lives of all these characters: between Wolverine and Quentin Quire trying to scam an intergalactic casino, Kitty dealing with a nano-Brood infection that mimics pregnancy (plus a 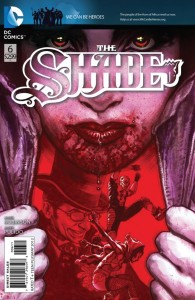 Fantastic Voyage-like attempt to cure her), and the ongoing troubles of Broo, the intellectual mutate from that savage race, there’s enough action, fun and angst, all in just the right amounts, to please any reader. Journey Into Mystery is Kieron Gillen continuing his seemingly-impossible task of making Loki into a sympathetic, complicated and clever protagonist, and doing it with an intriguing supporting cast, suitable villains (Nightmare, in the current story),  lots of sympathetic characterization, and very good writing. We just covered Shade a few weeks ago; suffice it to say that the art and coloring still make this one of the most striking books on the stands, and Robinson continues to redeem his work on that awful JLA mini-series by showing just how subtly good his writing can be when he’s working with material that’s more suitable to his talents.

With 40 years of experience in comic reading, collecting and reviewing, English Professor Phil Mateer has an encyclopedic mind for comics. Feel free to ask Phil about storylines, characters, artists or for that matter, any comic book trivia. He will post your questions and answers on the AABC blog. His knowledge is unparalleled! He is also our warehouse manager, so if you are looking for that hard to find comic book, ask Phil!
View all posts by Phil →
This entry was posted in New Comics, Reviews and tagged Avengers, Becky Cloonan, Brian K. Vaughan, Brian Michael Bendis, Brian Wood, Buffy, Conan, Crossed, Fantastic Four, Fiona Staples, Garth Ennis, Journey into Mystery, Kieron Gillen, Powers, Saga, Shade, Wolverine, X-men. Bookmark the permalink.