It Came From the Back Room #44 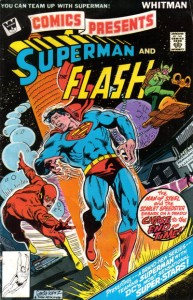 Standard recap: I’m slowly going through AABC’s one-million-plus back-issue room, restocking the boxes on the sales floor and pulling stuff to sell as discount/overstock/special items (these are featured at the discount racks at the west end of the store for a couple of weeks after each post, and then go to the discount racks on the east end of the store for a few weeks, and then disappear into our warehouses, so get them while you can). I’m going through the alphabet backwards (don’t ask), and at my speed (especially with the school semester in full gear), this amounts to a two-and-a-half-year project.  This week, we’re still featuring the letter”D”: specifically, DC’s long-running Superman team-up title: 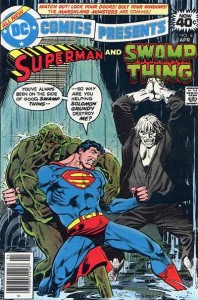 This title was mostly an ’80s phenomenon, running from July 1978 through September, 1986 (its last issue was #97, so DC didn’t even let it hit the magic #100, although a nine-year run is good under any circumstances). Like most team-up titles, it’s a hit-or-miss proposition, depending on the guest stars and the creative teams, but there are some collectors’ items lurking in its pages, and it’s fun to check out all the obscure combinations of characters and unexpected talent (Jim Starlin? Keith Giffen? Alan Moore?).

Although most of the issues are stand-alone stories, with some of the sameness that implies (there’s only so much time to introduce the guest star and the villain, set up the situation, and then resolve the plot), the first two issues of DCCP are a two-part Superman/Flash race, written by Marty Pasko and drawn by the underrated Jose Luis Garcia-Lopez, who did ’70s and ’80s Superman better than anyone this side of Curt Swan. It’s a typical cheat on the story — neither character “wins” — but the art is sure pretty to look at. Garcia-Lopez continues on issue 3 (Adam Strange) and 4 (the Metal Men), giving way to a nice retro-looking story by Murphy Anderson in #5 (inking himself, too, on an Aquaman story), with a Paul Levitz/Curt Swan Green 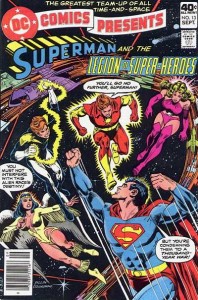 Lantern team-up in #6 that continues through a Red Tornado story in #7 (with Dick Dillin on the art over Levitz’s script), followed by a well-done Steve Englehart/Murphy Anderson Swamp Thing tale in #8, a mediocre Pasko/Joe Staton Wonder Woman team-up in #9 (although Staton’s clean-lined art is always worth a look), and an unusual Cary Bates/Staton WWII-era Sgt. Rock encounter in #10.

Yes, this is mostly going to be laundry list of guest-stars and creators; that’s the nature of the title, so shut up, keep an eye out for characters and creators you like, and let’s press on: Bates and Staton present Hawkman in issue #11, while Steve Englehart and Rich Buckler offer Mr. Miracle

in issue #12, followed by a Levitz/Dillin Legion of Super-Heroes story in #13 (Levitz is an old hand at those characters, although Dillin seems a tad out of place) that continues into a Superman/Superboy team-up in #14. Bates and Staton offer the Atom in #15, while Denny O’Neil and Staton cover Black Lightning in #16, with Firestorm in #17 (by Garcia-Lopez and regular Firestorm writer Gerry Conway), while Conway and Dillin offer Zatanna in #18 (in her late-Bronze-Age JLA pants suit and ponytail instead of the fishnets, sadly). Issue #19 has an O’Neil/Staton Batgirl story, while an O’Neil/Garcia-Lopex Green Arrow tale graces #20.

Issue #21’s got a Conway/Staton Elongated Man, while 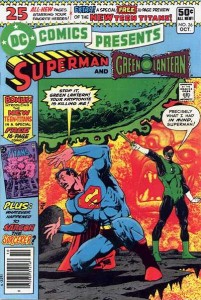 #22 goes for the obscure Captain Comet, by Mike W. Barr and Dillin; O’Neil and Staton offer Dr. Fate in #23, with Len Wein and Garcia-Lopez on Deadman in #24 (Garcia-Lopez, whose art is a good match for other Deadman artists like Neal Adams and Jim Aparo, does a good job on the character there), and Levitz and Dillin on the Phantom Stranger in #25; that issue starts an expanded page count, after a price increase from 40 to 50 cents, and starts an eight-page back-up series featuring “Whatever Happened To…?,” where readers get brought up to date on little-used characters; #25’s features Hourman. Number 26 is even bigger; it’s got a Marv Wolfman Green Lantern tale drawn by Jim Starlin, which is reason enough to give it a look, plus Sargon the Sorcerer in the 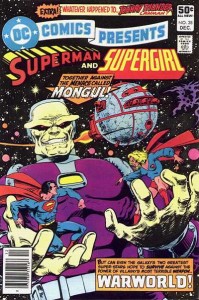 “Whatever Happened To…? slot, but, as all true DC fans know, its real claim to fame is an insert offering the first appearance of the ’80s version of the New Teen Titans, by Wolfman and George Perez; that’s enough to make it the most collectable of the DCCP run (Overstreet has it at $75 in NM condition). Number 27 has a Len Wein/Starlin Martian Manhunter tale that’s notable for its villain: Mongul the Merciless, one of those Starlin Thanos/Darkseid types, while #28 continues the story with the same team on a Supergirl appearance, and #29 offers the Spectre, still on the same storyline. Issue #30 settles down after those pyrotechnics, with a more normal Conway/Swan job featuring the Black Canary (for those of you keeping track, the “Whatever Happened To…” features were Congorilla in #27, Johnny Thunder in #28 (with Gil Kane art!), Dr. Mid-Nite in #29 and the Golden Age Atom in #30). 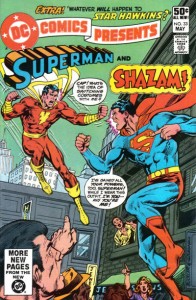 Issue #31 is a Conway/Garcia-Lopez Robin story (with Robotman featured in “WHT…?”); #32 is Roy Thomas and Kurt Schaffebberger on Wonder Woman (Mark Merlin and Prince Ra-Man, who was a mystic and not a brand of noodle, are in the back-up); #33 is Thomas and Rich Buckler on the first of a two-part Captain Marvel team-up (he’s just called “Shazam!” on the cover, thanks to legal issues with Marvel’s own Captain Marvel), and the ’50s sf character Star Hawkins in the “WHT…?” slot; #34 is the same team on the same story, except that now the team-up is “The Shazam Family”; that takes up the full 25 pages, so 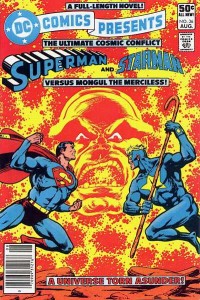 there’s no backup. Number 35 is a Pasko/Swan Man-Bat (but there’s a Gil Kane Rex the Wonder Dog back-up to make older fans happy; Alan, I’m talking to you…); #36 is another full-length cosmic Jim Starlin story, with Starman, while #38 is Starlin and Hawkgirl (Rip Hunter fills the back-up slot), #38 is a Pasko/Don Heck Flash story (the Crimson Avenger is in “WHT…?”), #39 is a Pasko/Staton Plastic Man (Richard Dragon, Kung Fu Fighter in the back-up), and #40 is a Conway/Irv Novick Metamorpho story, with Air Wave in the back.

Issue #41 is a change of pace, as the guest star is a bad guy: The Joker, naturally, by Pasko and Garcia-Lopez, with another insert comic added — this one involving the then-new relaunch of Wonder 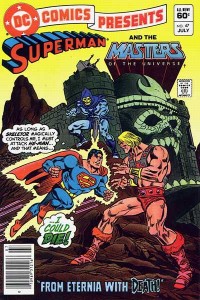 Woman, by Thomas and Gene Colan. Issue #42 is a Levitz/Novick Unknown Soldier story, with the Golden-Age Starman in the back-up; #43 is a full-length Levitz/Swan LSH-vs.-Mongul story. Issue #44 is a Bob Rozakis/E. Nelson Bridwell/Novick “Dial ‘H’ for Hero” tale, while #45 is a Conway/Buckler Firestorm and #46 is a Bridwell/Alex Saviuk Global Guardians team-up. Issue #47 is the other high-priced issue next to #26, and by far the rarer; it features He-Man and the Masters of the Universe, by Paul Kupperberg and Swan, and while Overstreet has it at a mere $20, NM copies go for closer to $75 online (in clearing out the backstock for this post, I came across just one copy, in NM, and it’s available for $75 too…). Number 48 has a Dan Mishkin/Gary Cohn/Novick 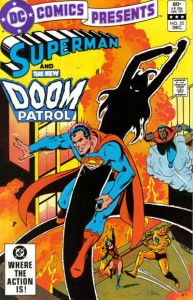 Aquaman story (with the back-ups returning  with a Black Pirate tale), with a Thomas/Buckler Shazam! story in #49, and a Mishkin/Cohn/Swan Superman/Clark Kent team-up in #50 that’s every bit the Silver Ageish stunt that you might expect.

Issue #51 is a Mishkin/Saviuk Atom story (plus an insert with the Masters of the Universe that, oddly, adds nothing to the book’s value); #52 is Kupperberg and Keith Giffen on the Doom Patrol (the Giffen art is a definite attraction). Issue #53 is a Mishkin/Swan House of Mystery Hallow’een story, while #54 features art by Phoenix’s own Don Newton on a Kupperberg-scripted Green Arrow tale. Number 55 is Rozakis and Saviuk on Air Wave (the creative team and the guest pretty much define a mediocre issue of this title), with Kupperberg and Swan on 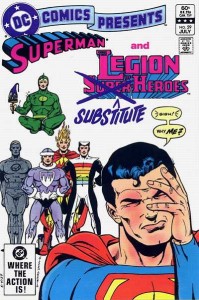 Power Girl in #56, Mishkin/Cohn/Saviuk on the Atomic Knights in #57, a Barr/Swan Robin (and the Elongated Man) story in #58, and a treat in #59: old LSH hands Keith Giffen and Paul Levitz on a snarky Legion of Substitute Heroes tale.

The 60s are evenly divided between average and “hey, that’s kind of cool” efforts: there’s a Cary Burkett/Novick Guardians of the Galaxy story in #60, a Wein/George Perez/Pablo Marcos Omac story in #61 (that one’s pretty good…), a Rozakis/Mishkin/Novick Freedom Fighters in #62, a Mishkin/Cohn/Saviuk Amethyst in #63, a Mark Evanier/Saviuk Kamandi in #64, a very nice-looking Gray 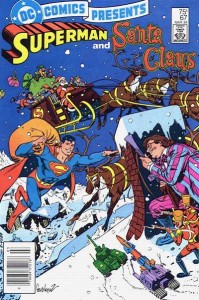 Morrow-drawn Madame Xanadu story in #65 (over an average Kupperberg script), an also-nice Len Wein/Joe Kubert Demon story in #66, a Wein/Bridwell Santa Claus story (!) with pencils by Curt Swan and inks by Murphy Anderson in #67, a Conway/Swan/Anderson Vixen story in #68, and an Evanier/Novick Blackhawk story in #69.

For the 70s, there’s a Kupperberg/Saviuk Metal Men in #70, a Bridwell/Swan Bizarro in #71, a Kupperberg/Saviuk Phantom Stranger/Joker in #72, a Cary Bates/Carmine Infantino Flash story in #73 (a tie-in to the interminable “Trial of the Flash” then going on in the Scarlet Speedster’s own title), a 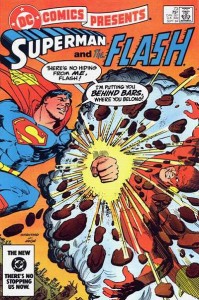 Rozakis/Mishkin/Saviuk Hawkman in #74, a Kupperberg/Tom Mandrake Arion in #75, a Mishkin/Cohn/Ed Berreto Wonder Woman in #76, a Wolfman/Swan “Forgotten Heroes” in #77 (teaming up then-obscure characters like the pre-Grant Morrison Animal Man, Rip Hunter, Cave Carson, Dolphin and others) which leads into the “Forgotten Villians” story in #78 (the Enchantress being, trust me,  the only one of those that you’ve ever heard of), and ending with another Superman/Clark Kent team-up in #79 by Kupperberg and Swan (this one enlivened by Al Williamson inks). 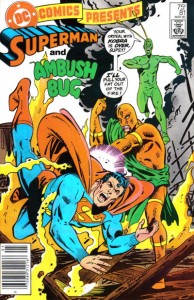 For the 80s, we have: a Kupperberg/Swan LSH in #80, a Robert Loren Fleming/Keith Giffen Ambush Bug tale in #81 (one of the high points of the whole DCCP run, if you like their very particular brand of off-beat meta-humor), a Bates/Klaus Janson Adam Strange in #82, a Barr/Novick Batman and the Outsiders in #83, and a very unusual team-up in #84: the Challengers of the Unknown, partly drawn by Jack Kirby (in what was probably his last work for DC), and finished by Alex Toth. That’s so weird that it’s worth a look, but the next issue offers maybe the best single issue of all: an Alan Moore/Rick Veitch/Al Williamson Swamp Thing story in #85 that you’ve probably read (DC’s reprinted it a bunch of times) but is 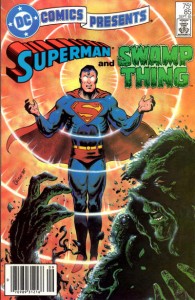 definitely worth the buck off the discount racks if you haven’t. Then, #86 is a Kupperberg/Rich Hoberg Supergirl story that ties in to Crisis on Infinite Earths, while #87 is a similar story involving Superman and the Crisis version of Superboy (that one’s by Elliot Maggin and Swan, and was sought after a few years ago when Infinite Crisis made that Superboy into a universe-punching bad guy). Number 88 is another interesting team: Steve Englehart and Keith Giffen on the Creeper, while #89 is a Rozakis/Saviuk Omega Men story.

Still with us? Almost done… there’s a Kupperberg/Denys Cowan Firestorm/Captain Atom story in #90, a Craig 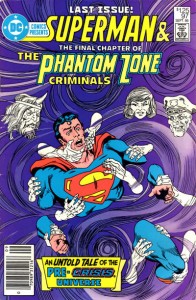 Whew! As always, many of these issues are available on the discount racks, almost all of them for $1; the ones that aren’t are available as regular back issues (we have all 97 issues in stock), so if any of these descriptions have quickened your collector’s pulse, now’s the time to seek them out.

With 40 years of experience in comic reading, collecting and reviewing, English Professor Phil Mateer has an encyclopedic mind for comics. Feel free to ask Phil about storylines, characters, artists or for that matter, any comic book trivia. He will post your questions and answers on the AABC blog. His knowledge is unparalleled! He is also our warehouse manager, so if you are looking for that hard to find comic book, ask Phil!
View all posts by Phil →
This entry was posted in DC, News & Promos, Reviews and tagged Alan Moore, Curt Swan, DC Comics Presents, Dick Dillin, Jim Starlin, Jose Luis Garcia-Lopez, keith Giffen, Masters of the Universe, Superman. Bookmark the permalink.