It Came From the Back Room #34

We’re interrupting the back-issue specials (still on FF — and, as I warned you all two weeks ago, those $1 Byrne issues are disappearing fast) for another original art/comics display, this one involving the DC character Jonah Hex, as drawn by one of my favorite artists: Tim Truman.

Jonah Hex and his comics history got covered back when we were doing the letter “J,” in this post, and the art display case back at the west end of the store has a number of his key books for sale there, including his first appearance, a nice-looking copy of All-Star Western #10 for $250, and copies of the first Jonah Hex series #1, #2, #3, #9 and #10.  Truman, however, was involved with the various Jonah Hex mini-series from Vertigo, in the ’90s. Here’s an abbreviated version of what I said about those comics in that previous post (hey, it isn’t plagiarism if you’re copying yourself…):

These are cool comics: Penciller Tim Truman, of Grimjack and Scout, is

paired with Sam Glanzman, a Golden-Age artist known for Charleton work in the late ’50s through the ’70s, and they present a meticulously-detailed, grimy and mostly-historically-accurate American West that writer Joe R. Lansdale fills with evil traveling zombie-making carnivals and Native American children with bear’s heads and, most notably, a race of sentient underground worms that have crossbred with humans, producing two moronic albino brothers who are the spitting images of Johnny and Edgar Winter, the real-life blues guitarists, who, unamused, proceeded to sue DC. This last bit occurs in the second mini, Riders of the Worm and Such, and is probably the ’90s Jonah Hex high point, although the other two series, Two Gun Mojo and Shadows West, offer enough similar pleasures to be  worth seeking out, too.

Here’s one of the two pages on display, from Riders of the Worm and Such #2, page 29: Hex has signed on to protect a ranch that’s been losing stock, and a few headless bodies have turned up. Hedge, the man who hired him, says it’s “worms,” but of course no one believes that. And then… well, look: 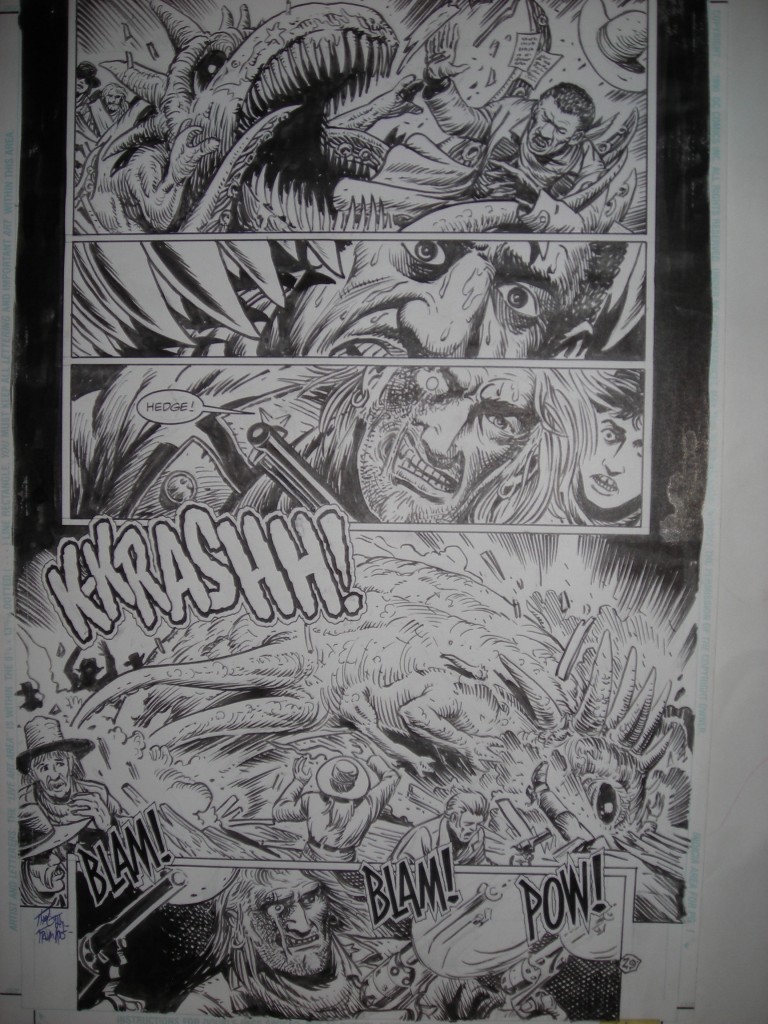 One of Truman’s quirks is that he uses the back of the original art page to sketch out his compositions before penciling them on the front. Here’s what the back of that page looks like:

… and here’s what the actual printed and colored page looks like: 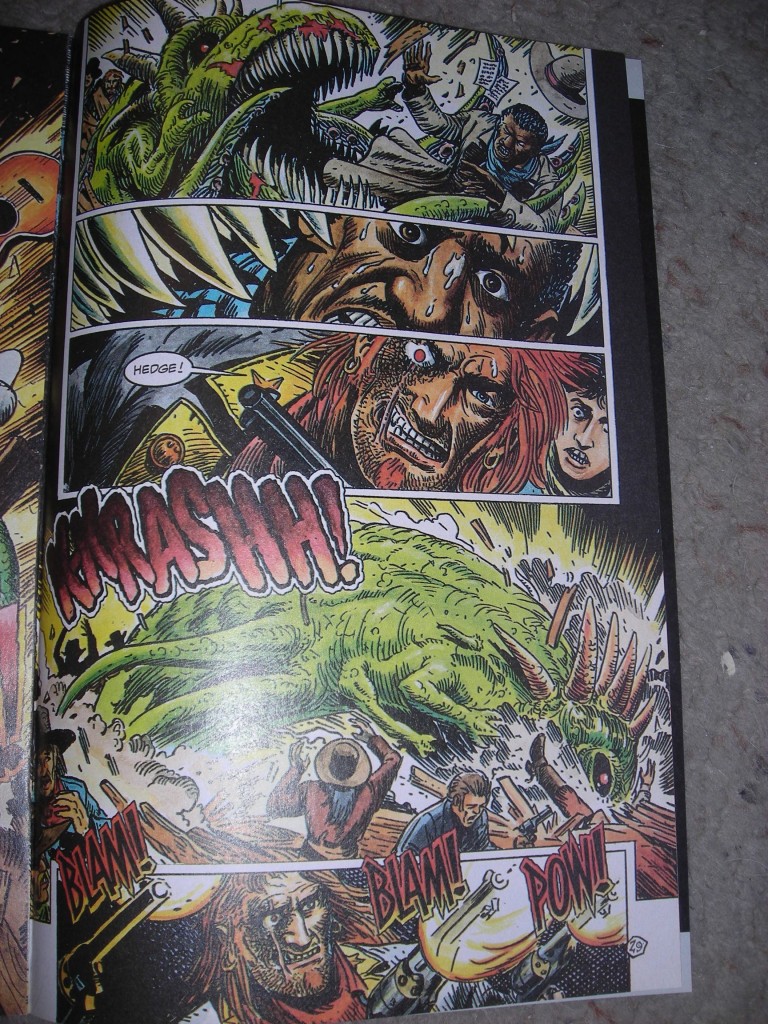 The next page is from Shadows West #3, page 15: Hex and his crew are cornered in a shootout, and the bad guys — the little guy with the big hat and his girl accomplice — rig a dead body on a horse to draw Hex out. Here’s the page: 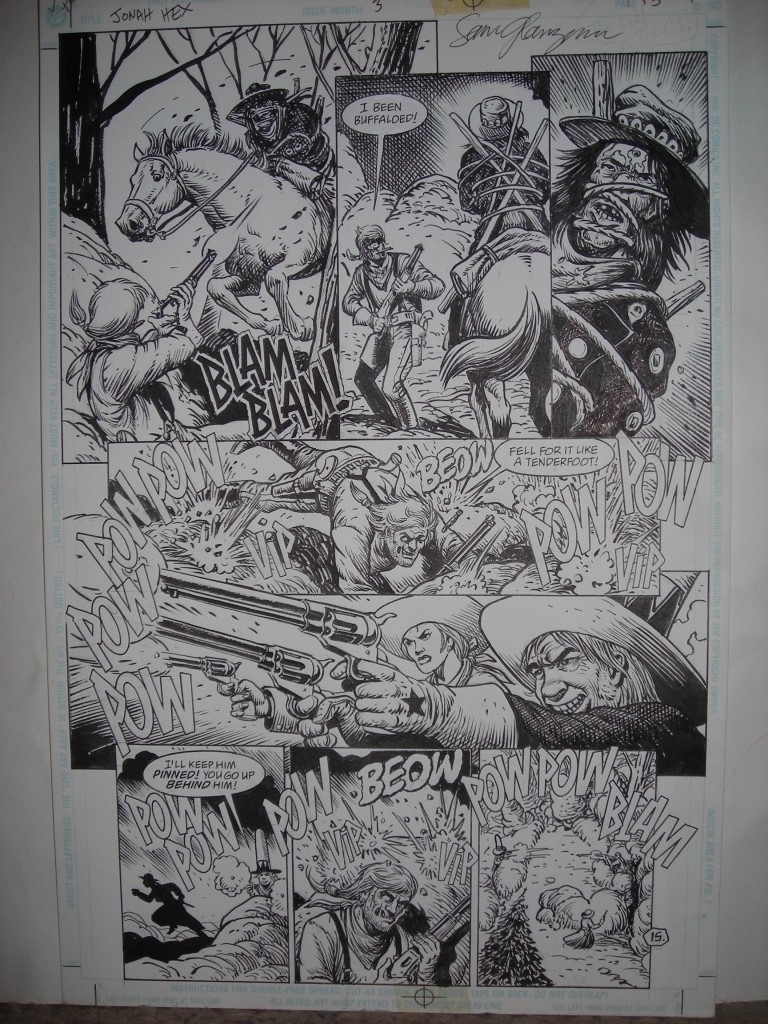 …and here’s what the back looks like — in pencil this time, instead of the red marker used in the earlier page: 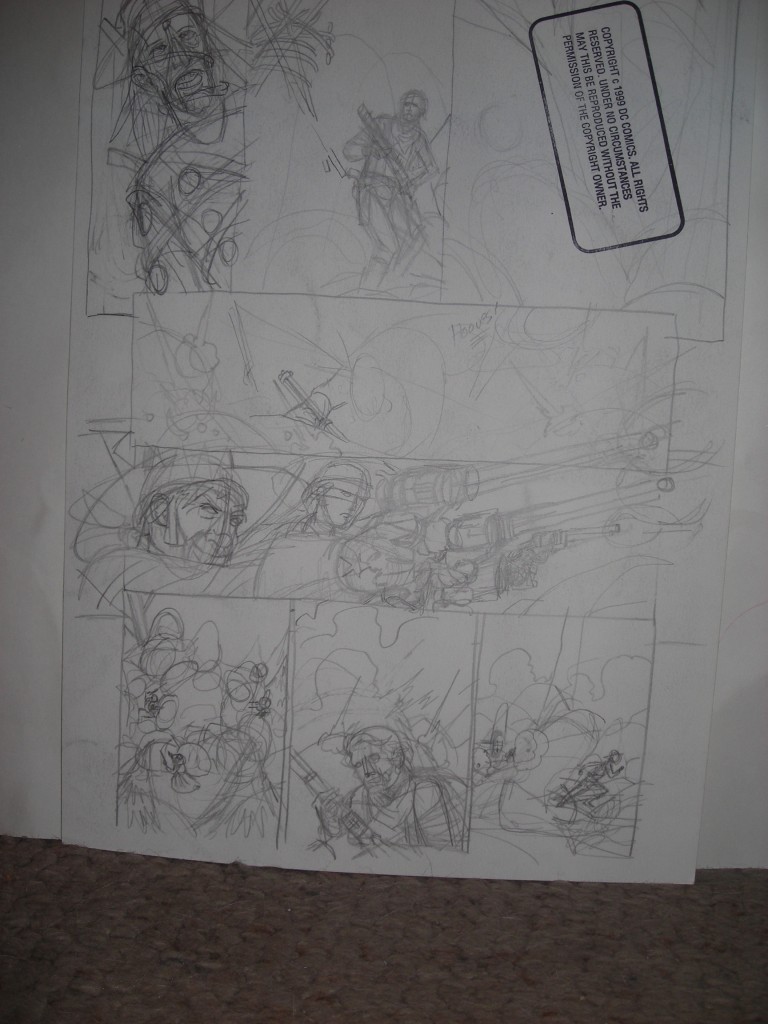 …and here’s the printed page:

Pretty cool, huh?  The Truman/Glanzman team has a knack for taking gritty, historically-accurate Western backgrounds, clothing and weapons and mixing them with weird and fantastic protagonists — something the Jonah Hex movie tried and failed to pull off, so it’s not as easy as it looks. They’re perfect for the Vertigo brand, though, and these comics are true underappreciated little gems.

The display case at the west end of the store has these art pages, plus sets of all three of the Vertigo mini-series, plus those issues of the original series we linked to earlier; we also have most of the most-recent Jonah Hex run — the Palmiotti/Gray/lots of great artists one — available in the regular back issue boxes, as well as the new DC 52 Jonah-in-old-Gotham City #1, a book that made a lot of people’s best-new-52 lists. Come in and admire the art, and indulge yourself in some great Western comics!

With 40 years of experience in comic reading, collecting and reviewing, English Professor Phil Mateer has an encyclopedic mind for comics. Feel free to ask Phil about storylines, characters, artists or for that matter, any comic book trivia. He will post your questions and answers on the AABC blog. His knowledge is unparalleled! He is also our warehouse manager, so if you are looking for that hard to find comic book, ask Phil!
View all posts by Phil →
This entry was posted in DC, News & Promos, Reviews and tagged Jonah Hex, original art, Tim Truman, Vertigo. Bookmark the permalink.