It Came From the Back Room #32 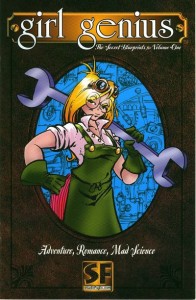 This week, instead of continuing with the letter “F,” (Fantastic Four coming soon!), we’re taking a break to talk about another original art exhibit and spotlight.  Appropriately, it’s an “F” artist, and one of my favorites:  Phil Foglio.

Mainstream superhero enthusiasts may not recognize the name, but Foglio’s been around in comics since the ’80s, working the Venn diagram intersection between comics, science fiction, gaming, adventure and humor. Old-time gamers know him for his comic strip What’s New with Phil and Dixie in Dragon magazine in the ’80s, and in Duelist in the ’00s. DC humor fans know him for two ’90s mini-series: Angel and the Ape in ’91, and Stanley and his Monster in ’93. Science fiction/comic fans know him best for three critically-lauded series: Mythadventures in the ’80s, Buck Godot in the ’80s and ’90s, and, most successfully, the current Girl Genius.

I’ve been a fan of Foglio’s work since the ’80s, and started collecting his original art about ten years ago; I have pages from Stanley and his Monster, a number from Buck Godot, and a couple from Girl Genius, all on display in my regular lair at the west end of AABC, along with issues from most of the comics discussed here, and the trade collections of Girl Genius. Here’s a chronological look at Foglio’s work, with scans of the art pages, and some of the relevant comics available, as we go: 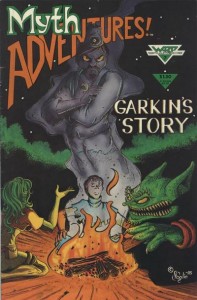 Foglio’s first published comic was a collaboration with “Freff” called D’Arc Tangent in 1982, an sf melding of Musketeers and robots that only lasted one issue before the partnership dissolved into legal wrangling (but left readers with its indelible cover image of a humanoid robot wielding a sword). His first sustained comics work was MythAdventures, an adaptation of the Robert Asprin fantasy series about a naive sorcerer’s apprentice and a sarcastic, world-weary demon (with a heart of gold), who takes him under his, er… fang, or claw or something. The written series is full of puns and social satire, but the comic adaptation is even better, the rare derivative work that outshines its original source. That’s largely due to Foglio’s art and plotting; he adds twists, packs the panels with sight gags, and generally deepens and enrichens the material (he’s also helped by his inker, a young Tim Sale). MythAdventures was published by Warp Graphics (best known for Elfquest) as a black and white magazine for its first six issues, and then as a comic for two more; those eight issues finished the adaptation of Asprin’s first novel, and ended Foglio’s association with the series (the comic continued, with art by Image Comics founder Jim Valentino, who was never quite able to achieve Foglio’s level of energetic fun). I don’t have any art from this series (I wish…), but we have most of the original magazines/comics available, for $5 or less; they’re one of the best indy series of the ’80s, and definitely worth a look. 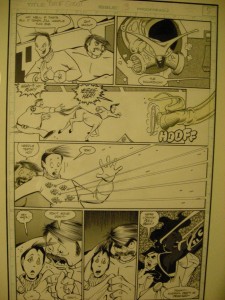 Other than Girl Genius, Godot is Foglio’s longest-lived character, and he’s a comedy/adventure mashup of noir private eye and science-fiction, a resident of the planet New Hong Kong, an almost-lawless member of a galaxy-spanning group of civilizations called the Gallimaufry. Godot is a Hoffmanite, from a high-gravity planet, making him strong and very hard to hurt, and he’s stout, mustachioed, hard-drinking, very smart and very funny; he’ll remind you of that cool, amiable upperclassman you knew in college who never quite graduated, but hung around the fringes of campus hustling pool and holding court, and seemed 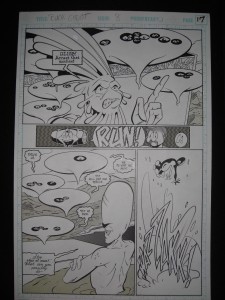 to know more about the world than you ever would (John Belushi would have played him perfectly in a movie version). Godot, surrounded by colorful alien races and assorted barflies and other well-imagined supporting players, appeared in two graphic novels from Starblaze in 1986 and 1987, and an eight-issue mini-series in the early ’90s; that story, “The Gallimaufry,” puts Godot on a diplomatic mission to Gallimaufry Station, a crossroads/meeting place for all the alien races of the galaxies, where, among other things, he single-handedly saves the human race from extinction. The whole thing is reminiscent of sf writer Keith Laumer’s Retief series, about an Earth diplomat on alien worlds, and it’s by turns slapstick-funny, adventurous, satirical and very, er…,  intricately plotted; fans of classic alien-civilization sf/adventure series from Star Trek to Firefly will probably like it. 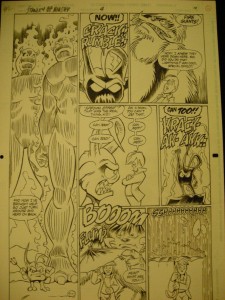 Foglio did two humor-series revivals for DC in the early ’90s; the first, Angel and the Ape, brings back that cult ’60s book and its characters, and cleverly ties them into DC continuity: Angel is the sister of Dumb Bunny, from the Inferior Five (all of whom who guest star, as Foglio manages to make DB a sympathetic, human character instead of a punchline), and Sam, the talking gorilla, turns out to be related to some of DC’s

other talking gorillas. As always with Foglio, all of this manages to be both funny and clever, with a lot of heart. Speaking of which…

Stanley and his Monster, the other DC revival, is from 1993, and features that other ’60s cult series, about a little boy, the monster in his closet who’s his best friend, and his attempts to conceal it from his parents. 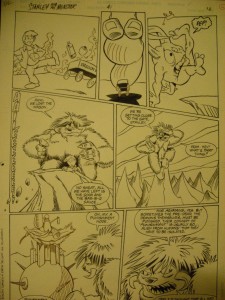 Foglio brings in the Phantom Stranger and John Constantine (at the last minute, DC editorial got cold feet about using Mr. Hellblazer in a humor comic, so Foglio calls him “Ambrose Bierce,” but he’s Constantine, all right), to explain that Stanley’s monster is a demon exiled from hell for being “good,” but through a series of mishaps he’s taken back, after which Stanley comes after him and they… well, check the three-page original-art sequence here for the flavor of the proceedings. 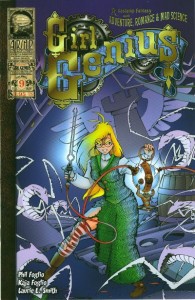 Girl Genius is a steampunk adventure/romance/fantasy, which began as a comic in 2000, became a web series in 2005, and to date has published well over a thousand pages of serialized adventure, collected into nine volumes, published yearly (with the tenth out next week, and the eleventh finishing up online even as we speak); the last three volumes have won science fiction’s Hugo Award for best graphic novel for the last three years in a row, an indication of both their quality and popularity.

The story takes place in Victorian-era Europe, but in a fantasy setting, with looming zeppelin-like airships, mad scientists (called “sparks”) whose mutates and giant robotic creations (“clanks”) stalk the countryside, and other cool stuff. As the story opens, Agatha, the heroine, is working for a university lab, but not very well; she gets migraines that interfere with her thoughts and make her clumsy. It turns out she’s the daughter of one of the Heterodyne brothers, heroes who kept the squabbling factions of Europe together until they disappeared mysteriously 20 years ago; before he left, her father gave her a locket to wear which she’s had ever since. In the series’s first sequence, she loses the 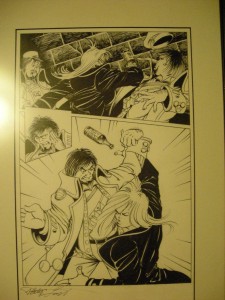 locket. It turns out she’s a spark, but her father, knowing that the people feared sparks, created the locket to hide her gifts and keep her safe. But now it’s gone….

And with that, we’re off and running, through gorgeously-colored and crisply-drawn encounters with Klaus, the iron-fisted but benevolent ruler trying to keep the world from spinning out of control, his hunky-but-earnest son Gil, soul-possessing wasps, traveling circuses, talking cats, women warriors, half-monstrous soldiers, and more sparks, clanks, mutants and hopeful revolutionaries than you can shake a gaslamp 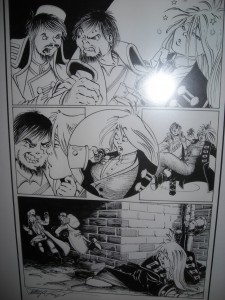 at.  Volumes one through four can be read in almost any order (just dive right in and pick up the story as it rockets along), although volumes five and six make one episode; similarly, volumes seven on are part of a long story involving Agatha’s ancestral castle, so they’re best read in sequence. Volume eleven is currently finishing up online (Foglio and his wife Kaja produce three new pages a week, on Mondays, Wednesdays and Fridays), and can be read here.  This is a perfect example of a new-media model: you can follow the story online, but you’ll want the collections for your bookshelf as they’re released, too; the stories are too compelling, and the packaging and printing too eye-catching and rich, not to own them yourself. At $22 for all but the first volume (it’s the only one not in color, and it’s only $10), and well over 100 pages of story each, they’re books you’ll reread often, and show off to your friends.

With 40 years of experience in comic reading, collecting and reviewing, English Professor Phil Mateer has an encyclopedic mind for comics. Feel free to ask Phil about storylines, characters, artists or for that matter, any comic book trivia. He will post your questions and answers on the AABC blog. His knowledge is unparalleled! He is also our warehouse manager, so if you are looking for that hard to find comic book, ask Phil!
View all posts by Phil →
This entry was posted in News and Events, Promotions, Reviews and tagged Angel and the Ape, Buck Godot, Girl Genius, Mythadventures, Phil Foglio, Stanley and his Monster, steampunk. Bookmark the permalink.