This is the book that features the debut of the new, multiracial Ultimate Spider-Man. It’s only eight pages (the other parts involve Ultimate Reed Richards escaping the negative zone, and Val Cooper talking to a reporter who’s about to break a big story), but

it’s gotten Marvel all the publicity it could have hoped for. Is it any good? Eight pages isn’t enough to tell; one downside for me was that the new guy’s Spidey dialogue is exactly the same kind of wisecracking, with the same rhythms, as Parker’s. However, his being so young and inexperienced is good: back in 2000, when Ultimate Spider-Man debuted, the best part of it wasn’t the origin, but the second and third arcs: watching the clueless-but-smart kid grow into the costume, as he battled the Kingpin and Dr. Octopus, and learned what being a hero was all about (Parker/Spidey’s speech to the TV reporter at the end of the Dr. Octopus story, in issue #18 — the end of Volume Three — was the scene that cemented for me that Bendis knew exactly what made the character tick). Having a chance to watch that growth again, with a fresh new face (and Pichelli’s art: her unmasking reveal panel, the one that the media endlessly reproduced, is an effective stand-alone portrait 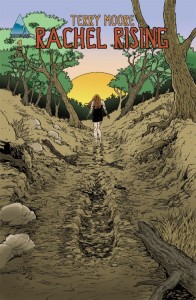 ), is enough to bring me back for the relaunch.

Moore’s not one to take a vacation: just a month after the end of Echo, we get his newest series, this one an (apparent) horror tale, involving a girl who claws her way out of a shallow grave in the woods, and has weird-looking eyes, a scar around her neck, and no memory of what happened to her. Is she dead? Possessed? Crazy? Tune in next issue: with Moore, it’s guaranteed to be a smart, well-drawn, and exciting ride. 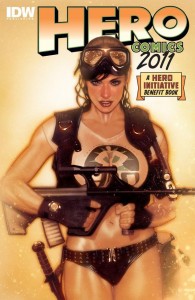 Profits from this book go to the Hero Initiative, which helps comics creators who are in financial or medical trouble (many of the older writers and artists, of course, have no pension, and get no royalties on any of their work-for-hire efforts; if they get sick or face other disasters, they’re on their own, no matter how much money their characters have made for various publishers in the past). The big attraction is the Gaiman/Dringenberg/Kieth story, a nine-page horror tale that brings together the creative team from Sandman #1; add in the Layman/Guillory Chew story, a nine-page solo tale from Kieth, an Adam Hughes cover and an Elephantmen vignette, and that’s more than enough reasons to buy this book. 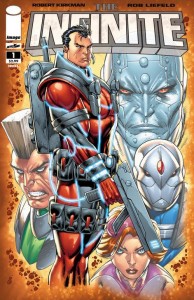 Kirkman’s Walking Dead and Invincible are two of the longest-running indy books out there, so any new effort from him is worth a look; this one’s about a time-traveler battling a future overlord, who returns to his past self to try to head the bad guy off at the pass. As with a lot of Kirkman, the central concept isn’t really new, but it’s the execution and imaginative twists that make it work. Will our hero convince his younger self that he isn’t crazy? Will the time travel paradoxes trip him up? Will Rob Liefeld ever learn to draw? Tune in next issue…. There are two versions of this book: a regular $2.99 edition, and a “deluxe” version for $5.99 that offers a much thicker cover, slightly shinier paper stock, and 21 extra pages of concept drawings, script pages and the 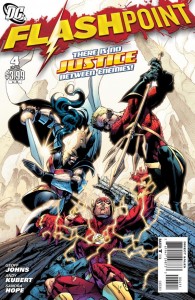 like. Since the sketch pages look almost exactly like the final art (insert your own snark here), the extra $3 is only worth it if you really like that sort of behind-the-scenes director’s-cut stuff.

Flashpoint itself moves right along, as Barry tries to get all the heroes together and fix the world before his memory

fails him.  There’s nothing startling in this fourth chapter of five — the last-page splash is exactly what you’d expect as a setup for the final issue next month (or, more precisely, the last week of this one) — but it’s all so smoothly done, so easily professional in both the art and the story, that it’s hard to find fault.  Batman: K of V concludes that mini-series,  and here too there aren’t the cliffhanger endings or wtf? moments of the previous issues, but the Azzarello/Risso team, with its noir nastiness and clever tweaks of the standard bat-mythology, still makes it one of the few Flashpoint tie-ins that are worth seeking out.

One interesting result of the DC 52 relaunch is that all their books this month are showcasing their final issues, giving their creators a chance to wrap things up with a bang. That happens in both of these comics: Jonah Hex ends this incarnation with a typically-dense, well-plotted story wherein a gravely-wounded Jonah hallucinates, hovering between life and death. Guest appearances by Scalphunter, Tallulah and Bat Lash, plus a callback to 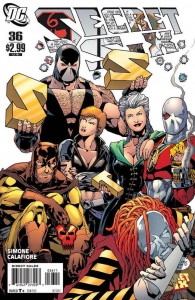 Michael Fleisher’s original death for the old cuss, help to round out what’s been, over its 70-issue run, one of the consistently-best books on the racks each month; let’s hope the Jonah-in-Gotham reboot is half as good. Secret Six, another underappreciated, consistently-appealing comic, offers an even-better conclusion, as Simone sends her sextet of psychotic but oddly human bad guys out with a suitably-pyrotechnic finale. This one isn’t being reincarnated, and Simone adds a sad, elegaic tone to the last adventure of the characters she’s written about for so long and so well. 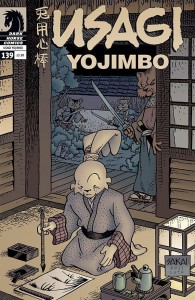 Sakai will be reaching the 200th total issue (over a few different publishers) of his ronin rabbit in the next few months, and this is a typical example of why it’s lasted so long: the first part of a skillfully drawn and dialogued murder mystery guest-starring the Columbo-like Inspector Ishida. No prior knowledge of the characters is required; pick it up and enjoy it, and see if you don’t want to come back for more.

Stuff I bought, but have nothing new to say about, so look up old reviews in the arhcives if you’re interested: 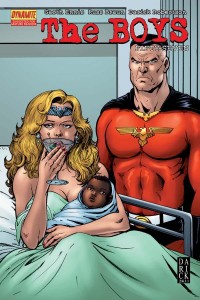 With 40 years of experience in comic reading, collecting and reviewing, English Professor Phil Mateer has an encyclopedic mind for comics. Feel free to ask Phil about storylines, characters, artists or for that matter, any comic book trivia. He will post your questions and answers on the AABC blog. His knowledge is unparalleled! He is also our warehouse manager, so if you are looking for that hard to find comic book, ask Phil!
View all posts by Phil →
This entry was posted in New Comics, Reviews and tagged Bendis, Flashpoint, Hero Comics 2011, Infinite, Jonah Hex, Kirkman, Liefeld, Neil Gaiman, Rachel Rising, Secret Six, Terry Moore, Ultimate Spider-man, Usagi Yojimbo. Bookmark the permalink.