It Came From the Back Room #28

Standard recap: I’m slowly going through AABC’s one-million-plus back-issue room, restocking the boxes on the sales floor and pulling stuff to sell as discount/overstock/special items. I’m going through the alphabet backwards (don’t ask), and at my speed, this amounts to a two-year project. This week, we’re in the middle of the letter “G,” and that means two Marvel titles — neither one a superhero title, both with rabid fan bases, but otherwise just about as different as they can be:

Groo is a humor comic, one with a significant cult 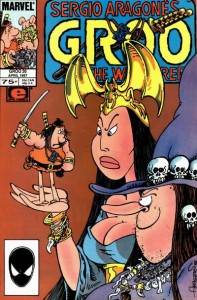 following; it’s about a perpetually-addled barbarian, and is drawn by Mad Magazine‘s Sergio Aragones and co-written with Mark Evanier. Comics has a number of long-running, well-done bigfoot-cartoony series; the best, of course, is Carl Barks’s Uncle Scrooge. Groo doesn’t hit that height, but fits very comfortably into the second tier of such titles, alongside the John Stanley/Irving Tripp Little Lulu, Sheldon Meyer’s Sugar and Spike, and the Al Wiseman Dennis the Menace books (the only other currently-produced title that can match it for longevity and quality is Stan Sakai’s Usagi Yojimbo, which will be publishing its 200th issue in a few months). Groo’s been around a mite longer than Usagi, but hasn’t published as many issues — his first

appearance is in the benefit comic Destroyer Duck, in 1982, and that’s followed by an 8-issue run at Pacific Comics, a one-shot from Eclipse in 1984, and then a 120-issue, ten-year run from Marvel’s Epic imprint, from 1985-1995 (Aragones and Evanier own all rights to the character, so they can take it wherever they want). That’s followed by a 12-issue stint from Image comics, in 1995; since then, the book’s been at Dark Horse, where every couple of years it generates a four-issue mini-series: all told, something over 160 comics in an almost-30-year career.

Groo’s attraction, like many cult series, is that it offers a

self-contained little world, full of interesting supporting characters (his dog Rufferto, his sister Grooella, the Sage, the Minstrel, the witches Arba and Dakarba, the petty conmen Pal and Drumm: hundreds of them, given the number of stories it’s told and Aragones’s obsessively-detailed art) who revolve around its larger-than-life star. Groo himself, like his more realistic inspiration Conan, is an unstoppable fighter, capable of single-handedly slaughtering any opponent (and most armies) in his path; he’s also spectacularly dim, capable of inadvertently destroying most ships, towns and even countries that he encounters. All of this is written with surprisingly-gentle good humor (given all the carnage), a number of running in-jokes (there’s the

mendicant thing, the mulch thing, the cheese dip, and a couple of dozen others), and large portions of heart and intelligence (while the style is cartoony, the weaponry, the fights and the plots are all carefully worked out, and there’s almost always a subtle real-world moral to conclude each tale).

Most of what’s out on the discount racks is from the Marvel era, with cover prices of $1 or less — which means you can get them for 99 cents each. Since most issues are self-contained (the Marvel run has only a few multi-issue tales, and they’re all labeled on the cover) it’s easy to just pick a few at random; they’re all good, and soon you’ll find yourself falling under the bumbling barbarian’s spell — like Lay’s potato chips and Groo’s own cheese dip, it’s just about impossible to stop with just one serving of this comic. 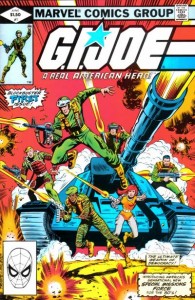 This debuted the same year as Groo, and also from Marvel, but otherwise they’re opposites (except in their attraction for comics readers): this is an adventure/war/special-ops book that takes itself seriously, with occasional humor, where Groo is a humor book with occasional serious themes. Also unlike Groo, G.I. Joe didn’t start as a comic: it was a large-sized action figure in the ’60s, produced by the Hasbro toy company, and then was relaunched in the early ’80s as both a toy line, a TV cartoon, and the Marvel series. The cartoon, especially, was a hit; most grown-ups who were in grade school in the ’80s — the boys, anyway — 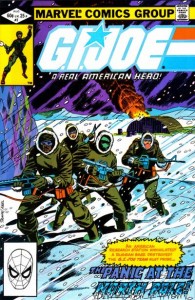 have memories of the after-school animated adventures, and of playing with the dozens of action figures, both of the Joes and of their enemies, the super-terrorist organization Cobra, that Hasbro produced.

The comic was a hit, too — and, coming at the dawn of the direct market, it’s an interesting case, because it offers one of the first illustrations of three principles of comics retailing:

(1) The hot first issue. Dealers, whose bread and butter was superhero books, were skeptical about a “war comic” based on a decades-old toy line and an untested cartoon.

When the cartoon took off and kids started looking for the comic, demand exceeded supply, and the first issue (the first ten or twenty, actually) multiplied in value. We’re used to that today (Chew and Walking Dead, for example), but back then it was a relatively-new experience.

(2) The second-issue bump. In terms of ordering, almost any dealer would, back then, order extra copies of a first issue, just on the off-chance that it would get hot; since orders of issue #2 were due before the first had hit the stands (asomething that’s happening even today, with all those DC second issues coming out in October whose orders are due this month), it was normal to order a lot fewer second issues. When G.I. Joe got hot, though, that 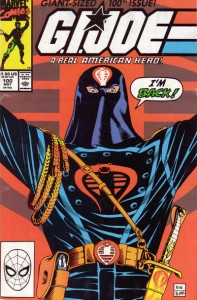 meant that it was much harder to find copies of #2 than of #1, and so that issue ended up worth more than the first. That’s happened to other books since, but, as far as I know, G. I. Joe was the first book to show that pattern.

(3) The last-issue bump. Supply and demand again — as the years went on, sales of the book dropped, and it was cancelled with issue #155. Since, by then, there were a lot fewer issues being printed than there were in the “hot” years, any completist who wants every issue finds it a lot harder today to get ahold of copies of the last few numbers. Thus, the last issue is worth more than any of the others, even the first two. That’s a pattern that’s been true for many long-running titles that were cancelled — the Marvel Star Wars and Transformers, for example — and, in fact, the last time Wizard 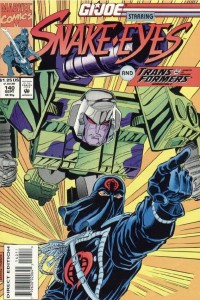 magazine did a full price guide they upped the prices on the last few issues of almost every long-lived series who saw its last issue occur in the ’80s or ’90s.

Of course, those aren’t the issues that are out on the discount racks — it’s mostly the huge swath in-between. Why should you care? First, they’re both nostalgic and cheap — as with Groo, they’re mostly ’80s and early ’90s book, so they’re almost all just 99 cents each. More impportantly, they’re surprisingly well-written: The writer on almost the entire run, Larra Hama, turned out to be a perfect match for the material, having served in Vietnam and possessing an extensive martial-arts background that let him infuse considerably more realism

and gravity to the comics stories than the cartoons could deliver. Considering that a licensed, toy-based book with all those mandated characters and situations should have been a disaster, the Joe comics are much more readable, and addictive, than they have any right to be.

The art is usually… ok — it’s often by competent journeymen like Herb Trimpe and Rod Whigham, although there are a few stand-outs: Russ Heath in #24, Marie Severin in #28, Todd McFarlane in #60, and Marshall Rogers in #s 61, 75, 77-82, 84 and 86. It’s Hama’s show, though; when the ’80s pop culture revival stated a few years ago, the Joes came back — first from Devil’s Due Publishing, initially through Image and then through their own imprint, and later from IDW. IDW revived the original comic’s numbering, starting from #156, and got Hama back as scripter, too; after over 15 years, it’s nice to see him back in harness again, with the characters that he’s given life to for so long.

With 40 years of experience in comic reading, collecting and reviewing, English Professor Phil Mateer has an encyclopedic mind for comics. Feel free to ask Phil about storylines, characters, artists or for that matter, any comic book trivia. He will post your questions and answers on the AABC blog. His knowledge is unparalleled! He is also our warehouse manager, so if you are looking for that hard to find comic book, ask Phil!
View all posts by Phil →
This entry was posted in Promotions, Reviews and tagged G.I. Joe, Groo, Larry Hama, Mark Evanier, Sergio Aragones. Bookmark the permalink.