A book of all-new Sergio, with two eight-page stories in color (the colorist, Tom Luth, is one of the few people on the planet who can color the obsessively-detailed Aragones art effectively), plus some one-page gags, plus a couple of puzzle pages (including a find-the-differences-in-the-panels game, and a find-the-two-identical-comics one, that are custom-made for that detailed style, and should be fun for any readers who can remember looking for Waldo). Aragones is a national treasure — of two countries — and the indicia’s indication that this will be a monthly comic is great news for fans of his universally-admired comic art. 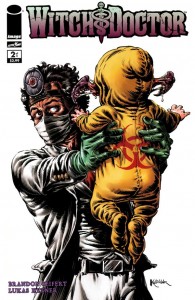 I missed the first issue of this, but the second hooked me — the titular doctor has both medical and mystic training, and he makes house calls to deal with various monstrous/supernatural problems: in this issue, parents whose baby has been replaced by a fairie changeling. The book reminds me of Xombi in its imaginative combination of the practical and the supernatural worlds, especially here with the “fairie” and her young, who’re a disturbing mix of biological and magical elements. The lead character recalls Mark Waid’s Holmes-like detective in Ruse: a combination of scholar, schemer and general arrogant pain-in-the-butt; between the clever story and the appealing art (just the right combination of horror and humor), this comic’s a winner. 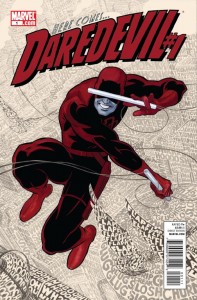 Speaking of Mark Waid… he takes over this new volume of DD, with a determination to take Matt Murdock back to the devil-may-care adventurer of his origins. His method of accomplishing that, while still acknowledging the darker, whinier Matt of more recent years, is worked out well, and the result is a snappy, fun first issue that’s helped considerably by Rivera’s well-designed, expressive and crystal-clear art. This is the first DD book in a while that makes good use of both sound and radar sense, in story and visuals both, and it’s a very encouraging sign of a good run to come. Let’s hope these guys get to stay on this book for a couple of years, at least.

The Goon and sidekick Frankie meet Niles’s Cal McDonald and his sidekick, the sentient zombie Mo’lock. It’s too bad that Powell’s contribution is apparently just in a few ideas and (one imagines) some tweaking of his characters’ dialogue (plus a varient cover), but Mitten at least isn’t embarrassing, and watching the two tough guys and their seconds duke it out with each other and various monsters is about as fun as yoiu might expect, and well worth it for fans of the characters. 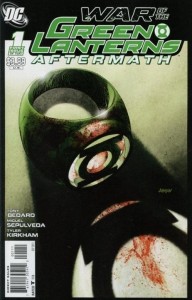 Bedard isn’t Johns, but he’s the second Lantern go-to guy, and he’s been writing their adventures long enough to know what he’s doing, and be able to make this an effective and essential epilog to the War of the Green Lanterns story. There’s only a page or two of Hal Jordan, but lots of plot points dealing with the various Corps members, the Guardians, and other ramifications that will eventually lead up to the titles’ relaunch in September, so if you’re a GL follower you need this comic. 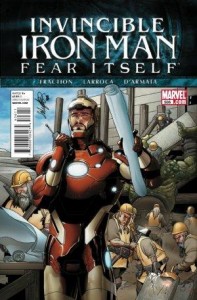 This is more effective than most of the Fear Itself tie-ins — and should be, given that Fraction is writing both this and that mini-series; it dovetails seamlessly with events at the end of the last FI, as Tony petitions Odin with the only sacrifice he has — his sobriety — and ends up trying to supervise a bunch of weapons-forging dwarves. Lots of nice bits; Fraction’s talked in the past about his own struggles with addiction, so having Tony start drinking here should make for some realistic and effective developments later, and the dwarfish foreman and his workers are hoots, like factory workers but with Norse swearing added. Larroca, as always, is up for whatever weird settings Fraction throws him, from Asgardian foundries to Pepper dealing with Detroit Steel in a demolished, eerie Paris, and this book continues to be a dependable, thoughtful and entertaining super-hero comic.

Not as good as the first one, because only the first third is Bendis — that picks up with Steve Rogers and Aunt May at Peter’s funeral. The Thor and Rogue sequences don’t connect as well; they feel shoehorned in, like trailers for whatever new Ultimates books will be coming out, and the Thor bit with Valhalla is hokey, even with the Hitch art. Meh.

These three books are part of DC’s Retroactive-’70s one-shots; the Batman is the best, because it’s the closest to having both a writer and artist from that period (Mandrake doesn’t quite make the cut time-wise, but his work has 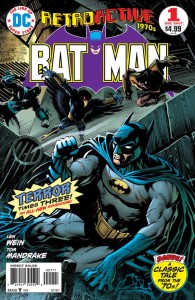 always had a shadowy, Gene Colan-like appeal that fits well with Wein’s Bronze Age Batman). The Wonder Woman should have worked — O’Neil was writing her during her Emma Peel-esque period, after all, and Bone seems like a good choice — but his cartoony style never quite slips into gear and fulfills the promise of his nice-looking cover. The Flash has the advantage, again, of one of its original Bronze-Age writers in Cary Bates, but the art’s too modern, and only intermittently recalls the era it’s supposed to. Too bad Carmine Infantino couldn’t do it. Another complaint about all three books — they all include the new story plus a ’70s reprint featuring the title character, but there’s zero editorial content. At least a page explaining what they were doing, giving some historical perspective on the reprint material and explaining who the creators of the new stuff were, would have helped enormously — especially considering they’re asking $5 each for these….

Stuff I bought, but didn’t have anything new to say about, so look up previous reviews in the archives if you’re interested: 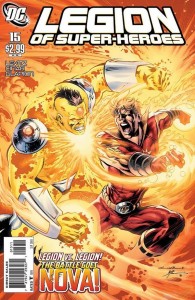 With 40 years of experience in comic reading, collecting and reviewing, English Professor Phil Mateer has an encyclopedic mind for comics. Feel free to ask Phil about storylines, characters, artists or for that matter, any comic book trivia. He will post your questions and answers on the AABC blog. His knowledge is unparalleled! He is also our warehouse manager, so if you are looking for that hard to find comic book, ask Phil!
View all posts by Phil →
This entry was posted in New Comics, Reviews and tagged Daredevil, DC Retroactive, Goon, Green Lantern, Mark Waid, Sergio Aragones, Ultimate Fallout, Witchdoctor. Bookmark the permalink.