It Came From the Back Room #27 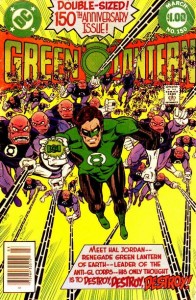 Standard recap: I’m slowly going through AABC’s one-million-plus back-issue room, restocking the boxes on the sales floor and pulling stuff to sell as discount/overstock/special items. I’m going through the alphabet backwards (don’t ask), and at my speed, this amounts to a two-year project. This week, two titles are featured on the discount racks, one as part of the normal “G” sequence and one as a special. Let’s take that one first:

These actually got put out a few weeks ago, but with the 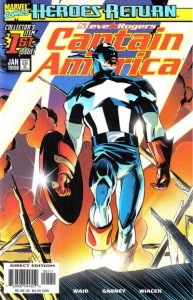 movie finally appearing this is a good time to cover them. They’re on the cover-price rack at the east end of the store, facing the front cash register, and they’re warehouse issues  from the last time I processed Cap, about two years ago (higher-end Cap books are also available on the website, of course, including here, here, here and here.) Along with some scattered older books and mini-series, there are two main runs:

The first is the “Heroes Reborn” relaunch from 1998, and it’s the best bet if you want very solid, traditional superhero storytelling. The creative team, Mark Waid and Ron Garney, had been on the previous version of Cap and had created a lot of critical buzz, and they don’t disappoint here; Waid’s affection and knowledge about Steve Rogers and the qualities that make him work come through clearly, and Garney’s good at both the heroic poses and action sequences, and the smaller moments. He leaves after five 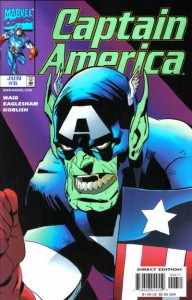 issues, but Andy Kubert pencils issues #7-12, 13-17, and 19-22, and between Skrulls, Cap’s missing shield (and high-tech new substitutes for it), and the Red Skull (not to mention the Cosmic Cube), there’s plenty of red-white-and-blue fireworks. Waid leaves at that point; his replacement, Dan Jurgens, is competent but lacks the spark Waid provided, even with Kubert sticking around for a few more issues. By issue #33, Jurgens is doing both story and art, and that’s the status quo through issue #50 (Feb. 2002), when the title is cancelled.

As with most books in the modern era, of course, the cancellation is followed by a relaunch a few months later, in June 2002: this, written by John Jay Rieber and with art 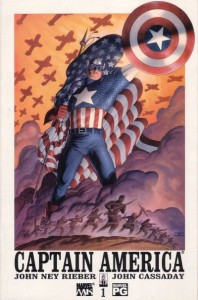 by John Cassady, is the other Cap series that we have a number of discounted issues available of.  Although that sounds like a high-quality creative team, they never really mesh well; coming as it does less than a year after 9/11, the book struggles to find the right tone. Rieber tries to avoid jingoism, but can’t quite figure out what to do instead, and the result is a story that’s hard to follow and never manages the kind of payoff the Cassady art should deliver. Cassady leaves after the first six-issue arc, and Trevor Hairsine comes on — but, halfway through the next story, Hairsine is replaced by Jae Lee and Rieber by Chuck Austen. That’s a … weird pairing, to be charitable, and while it stays through issue #16, the only thing memorable about it is that Cassady is still providing most of the covers (in fact, his covers to the first 15 issues are the best things about them). Then, Dave Gibbons 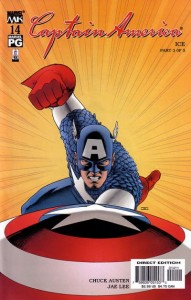 shows up — but to write an arc, not draw one, and his British sensibilities are an even more inexplicable match for Cap than the previous creators’. Robert Morales and Chris Bachalo take a shot next, on a five-issue story in issues #22-26, and that’s followed by a two-parter by Morales and Eddie Campbell, who is (a) one of the top indy srtists in the world, and (b) the last person you’d ever expect to see penciling a Captain America story. By now, it’s late 2004, and the Avengers Disassembled story is taking over most of the main Marvel titles; Robert Kirkman and Scott Eaton show up to disassemble Cap, and this strange, off-balance volume of his publishing history staggers to a close with issue #32, in December 2004. The good news is that the next incarnation of the Star-Spangled Avenger will be the current one, by Ed Brubaker, who shows everyone just how to manage the character and, especially, his supporting cast effectively; the bad news is that we don’t have any of those issues at a discount. However, there’s another title available instead, also at the front of the store: 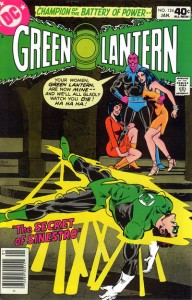 You may remember that we talked about GL a few weeks ago here, but that was just the last five years’ worth (the Geoff Johns years) to get in synch with the movie; now, I’ve reached the title as part of my regular alphabetical back-room work, so there’s a lot of earlier issues available too, from the early ’80s on up (here, too, higher-end copies are available, among them this, this, this and this). The Silver Age version had ended with a Denny O’Neil/Neal Adams bang in 1972 (great critical response, but mediocre sales); Dc brought it back with issue #90 in 1976, with O’Neil still on the writing and Mike Grell, at first, on pencils. By the first 1980s issue – 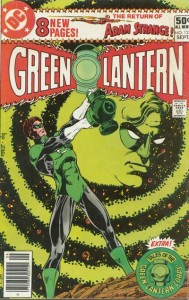 #124, about where our discount issues start — it’s still O’Neil on scripts, with Joe Staton just beginning a long (if sometimes interrupted) run on the book — so much so that he’s probably the GL artist for those who grew up reading the book in the ’80s.  O’Neil leaves a few issues later, and a series of writers appears until Marv Wolfman establishes a run with Staton beginning with issue #133 and lasting through #153, with the introduction of the Omega Men in issues #141-143 probably the most-remembered stories of his tenure. Mike Barr takes over the writing in issue #154 and is paired with a number of artists (including one issue by Silver Age GL star Gil Kane in #156), although Keith Pollard is the regular penciller — Barr, like Wolfman, uses mostly tightly-plotted space-opera-type stories, one or 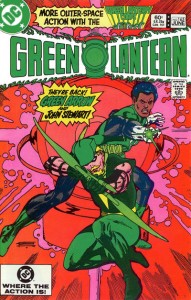 maybe two issues at most, while interweaving continuing subplots in a way that’s very Bronze Ageish; his return of Lantern John Stewart in #165, his last issue, is probably the most-remembered story now. After that, it’s short runs with only a few high points (Alex Toth art in issue #171 being the brightest) until writer Len Wein and artist Dave Gibbons take over with issue #172. They last through issue #187 (although #184 has a John Broome/Gil Kane fill-in), and are most known for bringing more Marvel-style, long-term plotting to the title, especially when the Guardians and Hal Jordan get into one of their periodic spats in issue #181, Hal quits, and the Guardians give his ring to John Stewart — permanently. New writer Steve Englehart continues the Marvel-style writing (and keeps Stewart as GL) when he’s teamed with Staton beginning in issue 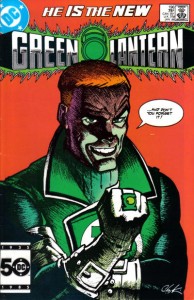 #188 (an issue that also features the classic Alan Moore/Dave Gibbons GL Corps story “Mogo Doesn’t Socialize”).  Hal doesn’t get a ring for good again until issue #200 — although, in #195, Guy Gardner does, setting up three of the current four earth-born GLs. The title changes to Green Lantern Corps with issue #201, with more focus on the alien GLs in addition to the Earthers, and Englehart/Staton last until almost the end of the series in #224 (Gil Kane draws the final two issues instead) in May 1988.

GL gets its next series over two years later, in June 1990 (stories had been running in Action Comics Weekly in the meantime); this one features Hal, John and Guy, and Hal has the Reed Richardsesque white streaks in his hair that indicated, 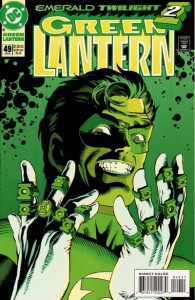 then, that he was older (and indicate, post-Johns, that he was being corrupted by Parallax). Writer Gerald Jones starts with issue #1 and stays through issue #47 (and, on the side, writes the two “Emerald Dawn” mini-series that redefined Hal’s origins for the ’90s, as well as the weird ultra-sci-fi-political Mosaic book starring John Stewart), with a number of artists, mostly Pat Broderick at the start, then Joe Staton, then M.D. Bright). Ron Marz comes on board with issue #48, for the “Emerald Twilight” arc that sees Jordan go rogue (driven mad by the destruction of Coast City), the Corps wiped out, and the sole GL ring going to newbie Kyle Rayner. Marz stays for a long run, through issue #125, with Darryl Banks as the go-to artist for most of that time; they provide a ’90s version of the space-opera ring- 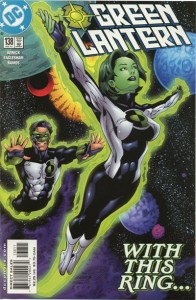 slinging that Wolfman and Wein were providing in the ’80s: solid, if not particularly spectacular. Judd Winnick takes over the writing chores with issue #129, in October 2000, first with Banks and later with Dale Eaglesham (and others — including, in issues #162-164, his final arc, Charlie Adlard, now of Walking Dead fame). Marz then comes back as writer for the last six issues, #176-181, and the Kyle Rayner era, and this volume of GL, end in November 2004. That sets the stage for Geoff Johns to reset everything back to a re-formed Hal Jordan — but we’ve talked about that already, in this post, so it’s a good time to finish the discussion for this week.

With 40 years of experience in comic reading, collecting and reviewing, English Professor Phil Mateer has an encyclopedic mind for comics. Feel free to ask Phil about storylines, characters, artists or for that matter, any comic book trivia. He will post your questions and answers on the AABC blog. His knowledge is unparalleled! He is also our warehouse manager, so if you are looking for that hard to find comic book, ask Phil!
View all posts by Phil →
This entry was posted in News & Promos, Reviews and tagged Captain America, Gil Kane, Green Lantern, Joe Staton, Mark Waid, Red Skull, Steve Rogers. Bookmark the permalink.