It Came From the Back Room #25 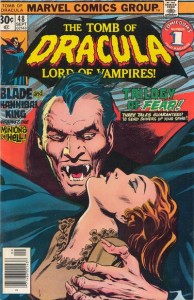 After I wrote this — but before I posted it — we got the news that Gene Colan died on Thursday, at the age of 84. His comics career spanned almost 70 years, and he was certainly well-established at Marvel when the ten-year-old me, 45 years ago, was awestruck at his work on Daredevil and the Iron Man stories in Tales of Suspense. Add in his Dr. Strange work, his Captain America, his work on two of the best comics of the ’70s — Tomb of Dracula and Howard the Duck — his ’80s work on Batman and indie books, and the way he was creating new work right up to a year or two ago, and you’ve got an extremely long-lived and influential career; I rank him right below Kirby (and just a tad below Ditko), but even with Gil Kane, and just above John 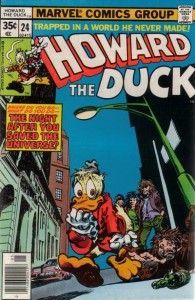 Romita and John Buscema, on my personal Best Artists list. For the next week, we’re displaying five pages of his original art — two Draculas, a Howard, a Daredevil and a Sub-Mariner — in the display case where I work, at the west end of the store. Come in and marvel at his ability, especially unfiltered by crappy printing or coloring, and check out the dozens of books available that reprint his best stuff (Colan’s particularly perfect for the Marvel Essentials volumes, since his pencils look so great in black and white). Even better — and more synchronistically — check out all the $1 Howard the Duck books available on the discount rack, which are mentioned at the end of this article, and were put out before news of Colan’s death reached us. Now, back to your regularly scheduled post:

Standard recap: I’m slowly going through AABC’s one-million-plus back-issue room, restocking the boxes on the sales floor and pulling stuff to sell as discount/overstock/special items. I’m going through the alphabet backwards (don’t ask), and at my speed, this amounts to a two-year project. This week, we’re finishing up Marvel’s Incredible Hulk title, and moving on to a few other things, too: all the cover-price Hulk books, from last time and from this one, are now up on the front discount rack at the east end of the store.

This volume starts only a month after the end of the first one, and while it’s called simply “The Hulk” at first, it even re-adds the adjective 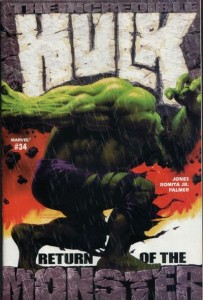 “Incredible” with its twelfth issue, so it’s pretty much the same book. The first seven issues are written by John Byrne, with pencils by Ron Garney, who continues on the art through issue #20; issues #21-23, 26 and 29 have art by Kyle Hotz, with John Romita, Jr. trading off with him on issues 24, 25, 27 and 28. Meanwhile, Paul Jenkins does the writing from issue 12 – 28. Most of these issues (and the next couple, too, up through issue #33) are competent but forgettable; no one creator or team sticks around long enough to put their stamp on the character. The biggest distinction of this early part of the second volume is that they’re often hard to find; turn-of-the-century Marvel often had low print runs, and so issues like #7 (guest-starring the Avengers), #8 (with Wolverine), #25 (a double-sized anniversary issue) and #33 (an even-larger 100-pager, with a regular-sized new story and three reprints) can be difficult to track down.

The lack of interesting stories (and of long-term creators) changes with issue #34, as new scripter Bruce Jones comes aboard for an over-three-year stay, accompanied by Romita Jr. for the first six issues. This arc starts with a Bruce Banner who’s on the run, pursued by mysterious agents and moving from town to town for reasons that aren’t, at first, explained. The wandering bit is reminiscent of the Hulk TV show, but the tone is much darker (typical for Jones, who’s got an affinity for complexly-plotted, psychologically-deep stories that plays out well here). Fans liked the idea, too — Hulk #s 34-36 were a hot book for a while in the early ’00s, enough for Marvel to pull them together into a reprint comic.

Romita Jr. leaves the title with issue #39, and Lee Weeks takes over the penciling in

issue #40. After a short run he’s followed by Stuart Immonen, who’s followed by Mike Deodato, Jr. from issues #50-54 and 60-65 and 70-72; other artists aren’t particularly notable, although Darick Robertson (of all people) is in issue #75. Jones’s last issue as writer is #76; he’s followed by Peter David, who returns to his long-time scripting duties from #77-87 (including one of the few decent House of M tie-ins from #83-86). Fans are spared the usual period of fumbling around after a long-term creator leaves, though; writer Daniel Way contributes a four-parter where the Hulk is tricked into outer space by Marvel’s Illuminati (Dr. Strange, Mr. Fantastic, et. al.), and then Greg Pak takes over the writing chores for the well-regarded and commercially successful “Planet Hulk”

sequence, starting in issue #92, as our hero ends up on a barbarian planet and, eventually, takes it over and then returns to Earth, looking for revenge against the heroes he thinks exiled him (and helped to destroy his newly-adopted planet), in World War Hulk. That five-issue mini-series is an old-fashioned punchup, enlivened considerably by Romita Jr. art; the regular Hulk book tracks the events, too, although with a variety of lesser artists.

With issue #112, Marvel pulls a switch : the characters of Hercules and Amadeus Cho take over the comic (and its numbering), while the Green Goliath, temporarily powerless, migrates to a new Hulk #1 that mostly features a different gamma-irradiated behemoth, the Red Hulk. This is, it 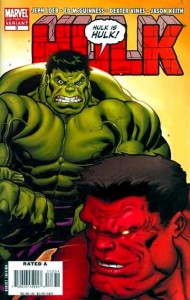 must be admitted, a derivative and stupid concept, but Jeph Loeb and Ed McGuinness manage to imbue it with all the enthusiasm that a 12-year-old would bring to the proceedings (it’s a red Hulk! And no one knows who he is! And he just punched out the Watcher!?!!), and make it enjoyable, mindless fun. They leave with issue #24; whether anyone else can make the character work remains to be seen. Meanwhile, the green Banner Hulk gets his own title back (with scripting from Pak), and restarting the numbering with issue #600, in September 2009; it’s currently focusing on Banner; his son Skarr from the “Planet Hulk” sequence; a Betty Brant who’s now a Red Hulk too; the Jennifer Walters She-Hulk; and other characters, giving readers two Hulk titles to choose from and bringing the numbering, and our discussion, back full circle.

But wait! There’s more! If all the Hulk titles are in the front, what’s in the back discount racks, at the west end of the store? Well, to start, one side features the most recent comics character to get a movie: 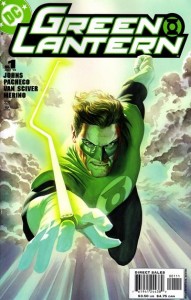 Yes, I cheated a little here, skipping a letter ahead, but just enough to provide the current runs of both Green Lantern and Green Lantern Corps — appropriately enough, since they’re both controlled by Geoff Johns, and his run, through the Rebirth mini-series, the Sinestro War, Blackest Night and the current War of the Green Lanterns, is what’s made the character popular enough to justify a movie (plus, Johns was DC’s go-to creative consultant during the filming, so it remains largely true to his version of Hal Jordan, for better or worse. For what it’s worth, I thought the movie was enjoyable, mindless entertainment, well worth the $7 I spent on it; it probably helped that the negative reviews meant that my expectations for it were almost nonexistent). Anyway, lots of the last five years or so of continuity — including most of those crossovers — are available at cover price, so check ’em out. 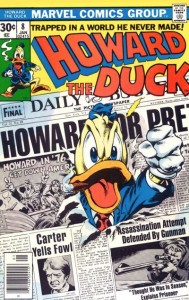 The other half of the west discount rack features some miscellaneous “H” titles, and this is chief among them. If you’ve never read this book, and are rolling your eyes at the idea, stop it: the first 27 issues, plus the annual, are in the top ten comics titles of the ’70s: a ground-breaking, intelligent and funny mashup of superheroes and popular culture from the fevered imagination of writer Steve Gerber and (in most issues) artist Gene Colan. Pay particular attention to the one-shot stories in #8 (Howard, in 1976, runs for president) and #24 (Howard wanders around New York City), and to the three-parter with the Circus of Crime in #s 25-27. At $1 each, just shut up and trust me: these are surprisingly great stories.

Hercules and Heroes for Hire

These are the other two “H” titles out for sale: Hercules has the two Bob Layton-created mini-series from the ’80s, which are fun, entertaining space opera (and among the earliest mini-series produced by Marvel); there’s also the recent run that took over the numbering from the Hulk, from #113-141. Heroes for Hire has both the ’90s and ’00 series; the latter, with a roster of mostly-female mercs led by Coleen Wing and Misty Knight (in all her Pam Grieresque, atomic-Afroed glory) is the better of the two.

With 40 years of experience in comic reading, collecting and reviewing, English Professor Phil Mateer has an encyclopedic mind for comics. Feel free to ask Phil about storylines, characters, artists or for that matter, any comic book trivia. He will post your questions and answers on the AABC blog. His knowledge is unparalleled! He is also our warehouse manager, so if you are looking for that hard to find comic book, ask Phil!
View all posts by Phil →
This entry was posted in News and Events, Retailing, Reviews and tagged Bruce Jones, Gene Colan, Geoff Johns, Green Lantern, Hercules, Heroes for Hire, Howard the Duck, Hulk, Peter David, Planet Hulk, Red Hulk. Bookmark the permalink.