All right folks, it’s a Sunday afternoon, you know what that means… I’m hung over! Just kidding (kinda), but what it really means is it’s time for me to judge books that are wayyyyyy older than me. Let’s do this! 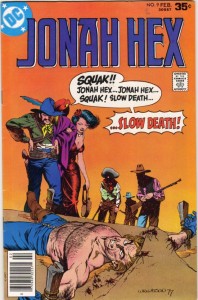 So this is the kind of comic that has a little asterisk after frijole to tell you it’s Spanish for “bean” but then just expects you to know what palaver means. Oh the 70’s!… In this issue, Hex is dragged to Mexico to help the government get some gold treasure (no, I can’t really explain it any better than that). In the process he meets up with Papagayo, a crazy guy who loves his parrot. He gets taken to a desert, and ends up in exactly the position that the Bernie Wrightson cover indicates. Hex breaks out by, no joke, getting a guy close enough to him to choke him with his own necklace. It does leave on a cliffhanger, but it’s very much your typical western fare. More info can be found HERE

Jonah Hex is an ongoing series right now, featuring issues with guest art from the likes of Tony DeZuniga, Jordi Bernet, Darwyn Cooke, Jeff Lemire and more. It’s pretty much the best thing you aren’t buying right now. After the DC relaunch, it will become All-Star Western, where Hex will be in the Old West of Gotham City. 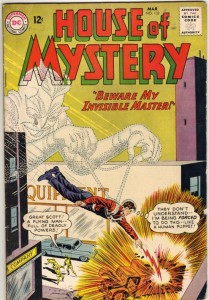 House of Mystery is always kind of a strange beast. It toes the line of being completely absurd or being a horror comic, and this issue is no exception. Being an anthology it provides three quick and weird stories. It is pretty much exactly what you expect the comic to be, a series of tales that all rely on weird twists and unexpected turns. The pay off is never as good as you want it to be, but it’s just a strange thing to look at. What’s nice is that there’s no continuity to work through. You can pick this comic up at any time and just sit and read it. It’s a good example of what used to work with comics before they were completely bogged down in “real life.” More info can be found HERE

House of Mystery is a strange beast, that doesn’t really exist in any way anymore. The closest you’re going to get is something like “Weird Worlds” or other anthology stories, but there aren’t very many around anymore. 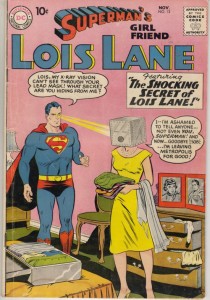 And what better way to end the day then with Lois Lane wearing a lead-lined box on her head? What’s strange about this whole thing is that Lois Lane barely ever has actual thoughts. Every action she does she narrates out loud, and any ideas or plot points are vocalized. In this issue, Superman (not Clark, just Supes) meets Lois’s parents, and hilarity ensues. A doppelganger for Lois starts impersonating her throughout the city, and hilarity ensues. And of course, in the third story, Lois hides a deep dark secret with a box over her face, and SURPRISE, hilarity ensues. This honestly feels like every sitcom you’ve ever heard about from your childhood. It’s a rip-roaring good time, that’s fun for the whole family! (what is wrong with me…) More info can be found HERE

In the latest Flashpoint event, the mini-series Lois Lane and the Resistance is kinda your only way to get anything from her. You can also check out some of the Superman titles, and I think she shows up at least once in a while.

And that’s it! I’ll see you folks later.

This entry was posted in Reviews and tagged House of Mystery, Jonah Hex, Lois Lane, Superman. Bookmark the permalink.