It Came From the Back Room #11 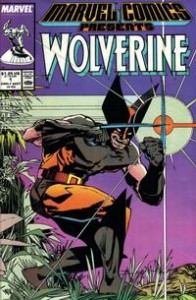 Standard recap: I’m slowly going through AABC’s one-million-plus back-issue room, restocking the boxes on the sales floor and pulling stuff to sell as discount/overstock/special items. I’m going through the alphabet backwards (don’t ask), and at my speed (especially with the school year now in full gear), this amounts to a two-year project. I’m currently (and finally!) finishing the Marvel “M” stuff, and here’s the last title I’ve encountered:

MCP was started in mid-1988, and was a biweekly anthology series; it was likely a reaction to DC’s early-1988 move of Action Comics to a weekly anthology (no, kids, 52 wasn’t the first attempt 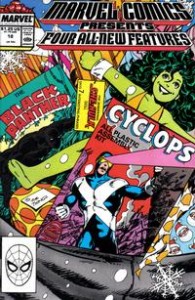 at a weekly comic…), except that Marvel , having had a few months to observe how nuts a weekly book was making DC’s editors, opted for the every-two-weeks format instead.

The plan was (sort of) simple: break the book into four separate eight-page stories per issue, with two or three of the four being continuing serials, and the remainder one-shot episodes. As in most anthology series, the goal was to attract readers with big-name creators on the front end, and then give rookie or lesser-known writers and artists more of a shot at the back-of-the-book features. Ditto with the characters: reel readers in with the big guns, and then play around with the C- and D-list characters in the rest of the book. 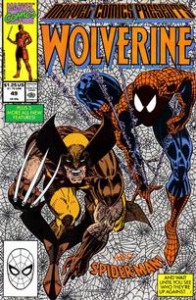 Because of the huge number of individual stories and episodes printed during MCP‘s 175-issue run, a lot of the work for collectors is to dig through the trash, and tease out the good stuff; this is made harder just because different readers will have different ideas of which writers, or artists, or characters they consider “good.” Here, I’ll try to help out by listing the best of the bunch, but don’t just take my word for it: dig through these issues yourselves, because there’s always the chance you’ll find, say, that Puck solo story by Joe Madureira that’ll make your collection, and your life, complete. (Yes, that one actually exists, but you’ll have to read on to discover what issue it’s in.)

Fortunately for those of you reading this, MCP was released during a high-sales run for

comics, so stores like AABC ordered up on it — meaning that almost all of the issues are now available as overstock, with mostly unread, VF or better copies at the original cover prices of $1.25 or $1.50. What’s in there? Let’s see….:

The inaugaral issues started strong: issue #1 begins three multi-part stories, with the top feature being a Chris Claremont/John Buscema Wolverine story that ran through issue #10. Add that to a Steve Gerber/Tom Sutton Man-Thing tale (running through issue #12), and a Doug Moench Master of Kung Fu story (running through issue #8), and there’s a lot to attract a discerning fan. The backups aren’t bad, either: try a Steve Ditko plotted-and-drawn Sub-Mariner story in #7, and a Machine Man one in #10. Ditko shows up a lot in 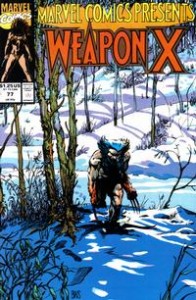 After the original serials wind down, others take their places: the longest, and maybe the best, is a 25-episode Black Panther-vs.-apartheid by Don McGregor and Gene Colan that runs from issue #13 all the way to issue #37. There’s also a Doug Moench/Paul Gulacy serial involving their creation Coldplay… er, sorry, Coldblood, in issues 26-35, and a young Erik Larson on an Excalibur story in issues #31-38, involving a bunch of thinly-disguised Looney Tunes characters. Solo shots during this same time include a John Byrne She-Hulk appearance in #18, a Peter David-written Grey Hulk tale in #26, a McGregor/Jim

Lee Sub-Mariner story in #33, and a Marshall Rogers-drawn Hulk tale in #38.

Whew… see how we work for you, here at AABC? Next, there’s a Marv Wolfman/John Buscema Wolverine story from issues #38-47, paired with a Bob Layton Hercules three-parter in issues #39-41, and an Erik Larson written and drawn Spider-Man/Wolverine team-up in issues #48-50. Add in a Rob Liefeld Wolverine story (wait… are those Logan’s arms? How do his chest and legs move like that? Oh, Rob…), and a Kelley Jones Comet Man tale (comet…tale…get it?) in issues #50-53, plus a Gerber/Cindy Martin Poison story in issues #60-67, a Mark Texeira Ghost Rider from #s 64-71 and a Paul Gulacy-drawn Shanna the She-Devil in issues #68-77, and then all that’s needed is to mention a few solo episodes — a Peter David/Herb Trimpe Hulk in #45, and a Liefeld 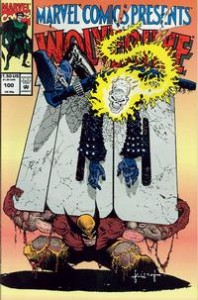 Black Widow in #53 — to bring us up to MCP‘s most famous, and certainly most popular, story.

That would be Barry Windsor-Smith’s Wolverine: Weapon X, running from issues #72-84 (and, yes, we have many of those on the discount rack), which sets up plot threads, and answers questions about Wolvie’s origins, that have been mined by other creators for the last 20 years. It’s both violent and very pretty: Smith’s got an obsessive way with drawing wires and metal parts and other machinery that’s hard to resist, and his tortured hero and evil scientists make this worth seeking out. Adding to the weirdness is a Doug Moench/Tom Lyle Sgt. Fury/Dracula team-up (?!) in issues #77-79, and a Byrne Sunspot one-shot in #79, plus a Marshall Rogers Daredevil story in #81. 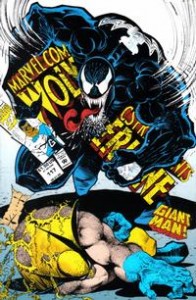 The weirdness continues after Smith, because Sam Kieth shows up to offer his heavily-rendered, impressionistic version of Wolverine in a Peter David-written serial from issues #85-92, followed by a Kieth-drawn entire book’s episode in #100 that involves Dr. Doom, Ghost Rider, Wolverine and Nightmare (Kieth also starts contributing a number of covers at this point), and a Wolverine/Venom battle through issues #117-122.

But wait! There’s more!  There’s that Joe Mad Puck story in #99, plus his work on an earlier Northstar tale in #92, and a Mirage one-shot in #121. Gene Colan fans can check out his Wolverine/Nightcrawler team-up in issues #101-108, and a Demogoblin story (inked by Al Williamson) in issue #112. That issue also has a

Jim Starlin-written Pip the Troll story, while Starlin also contributes the script for a Thanos serial (drawn by Shawn McManus) in issues #108-111.

That’s about it for the good stuff, unfortunately, because as MCP ages the pickings get slimmer and slimmer. There’s a Siege of Darkness crossover (for all you early-’90s Marvel horror fans, although personally I think the “horror” was in the art in those books…) in issues #143-146, and… that’s about it. As mentioned earlier, though, that’s only one fan’s opinion on the good stuff — there are over 150 different issues of MCP available cheap right now, so go look for yourselves, and see what else you can find. Me, I’m glad to finally be finished with the letter “M,” and look forward to “L”: Lucifer, Lobo, and Legion of Super-Heroes, here we come!