The Latest and (Mostly) Greatest #86 by Dan!

All right folks we’re back! It’s another great week of comics with plenty worth talking about. Let’s do this! 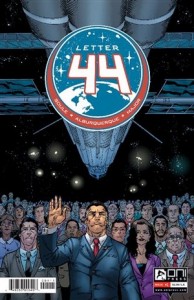 This new comic is probably the most interesting thing to come out this week. A new president takes office and right before his inauguration, he reads a letter left by his predecessor. Apparently something was found out in space and it is building stuff out in space and the previous president did everything he could to learn about it, regardless of what it did to the American people. The new president gets in contact with the people who have been sent to check it out, and it’s worse than they thought. It’s a very good introductory issue leaving enough open plots to make me wonder what comes next. It’s good stuff, very enjoyable and very interesting. 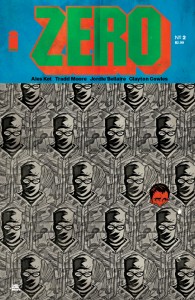 Well this is going to be a really weird comic, isn’t it?We’re in the second issue and the art has changed, going to Moore, who is known for his work on the Luthor Strode series. It’s not bad, it’s just jarring. What we get with this issue is a little bit of explanation about the backstory of our main character and all the crazy messed-up stuff that he’s had to do since he was a child. The last issue was just a straightforward mission to warm up the readers to the concept, but here we hit some actual plot and it works almost perfectly. With this second issue, Zero has a ton of potential to be the next big thing for Image, and with only two issues, it’s easy to catch up ASAP. 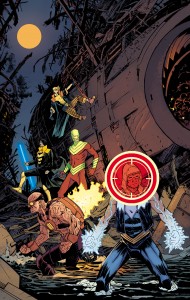 Here’s your batch of Forever Evil tie-ins this week and they all hit the story in different ways. Rogues relies on you to have read the Grodd 3-D book and the Rogues 3-D book (both of which are worth a look). The Rogues are just trying to hold onto their city as per usual, but everyone is getting in their way. It’s not bad, and can stand on it’s own. Pandora sees the titular character sent to Earth-3 where she meets a messed up Martian Manhunter, fights Vandal Savage and somehow makes her way back to main Earth to attack evil Alfred. It’s… not very good at all. I don’t have anything else to say. The Justice League title gives us our first look at the disappeared League and what’s going down. Clearly they’re trapped somewhere, and it’s going to be up to Martian Manhunter to get them out of there. This one is really good if only cause the writer/artist team is one of the best in the business. More books like that one please! 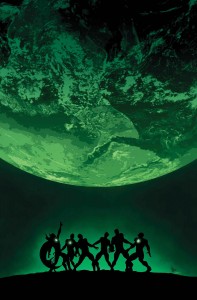 After the main heroes manage to kill one of the Builders (Creators? I don’t even know what I’m saying) Hickman delves into the next steps for the Avengers to start taking care of business. To me, New Avengers is always going to be better, just cause I’ve always liked what it deals with. The book actually has Thanos in it and moves several plots along (the search for Thanos’ kid and the Illuminati’s trouble blowing up worlds) and it’s just good stuff. Avengers is just OK, with a couple ocharacters that haven’t been used in a while getting their play. This series may end up reading better as a whole instead of in pieces like this, but it’s at least passably enjoyable. 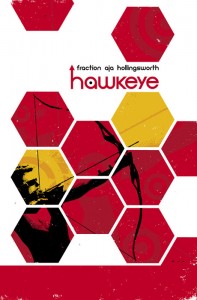 Ugh. This is one sad issue of Hawkeye. I think what makes this book work more than anything else, is that Fraction doesn’t really have him do too much superhero work. Sometimes he has to fight, but it’s glossed over in favor of humanizing the hero and the people that have to work with him. This issue finally deals with the consequences of the death of “Grills” and it is a heartbreaker. Sometimes you just want to read a superhero book with a real funeral in it, ya know? It’s also nice that Fraction and Aja seem to have a plan in place for the future (they discuss a little bit of it in the letters page). It’s the best book Marvel produces (close second? Daredevil) and I look forward to every issue. 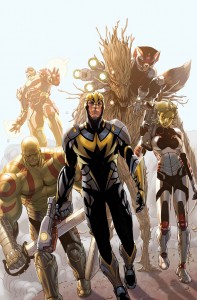 Guardians of the Galaxy #7 Writer: Brian Michael Bendis Artist: Sara Pichelli: This is a pretty book, which makes up for the fact that it’s written, and written and written by Bendis. I just get tired of the random faux-Tarantino style text blocks. It’s a comic book, let the art breathe man!

Animal Man #24 Writer: Jeff Lemire Artist: Rafael Albuquerque: Another solid Animal Man issue, and it’s worth noting that Albuquerque will be drawing this two-issue story so it’s immediately going to be incredibly nice to look at. Good stuff 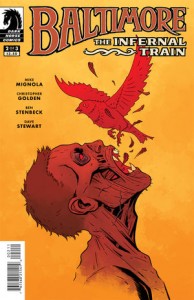 Baltimore: The Infernal Train #2 Writer: Mike Mignola & Christopher Golden Artist: Ben Steinbeck: What’s not to love about a book where a dude fights zombie as a corrupted priest tries to hunt him down? It’s great stuff, but what do you expect?

Uncanny X-Men #13 Writer: Brian Michael Bendis Artist: Chris Bachalo: Hey another Bendis book! So many words! Not sure there’s much more to say. If you like Bendis, you’ll buy this book. It’s same ol’ same ol’.

Wonder Woman #24 Writer: Brian Azzarello Artist: Goran Sudzuka: This is quietly one of the best books on the stands. It works completely apart from the entire new 52, is great to look at, and is immediately re-readable. Wonder Woman’s the God of War now, what’s not to love?

And that’s the week! See you kids next time.