The Latest and (Mostly) Greatest #86 by Dan! 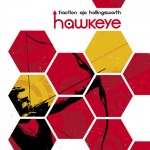 All right folks we’re back! It’s another great week of comics with plenty worth talking about. Let’s do this! Letter 44 #1 Writer: Charles Soule Artist: Alberto Jimenez Alburquerque This new comic is probably the most interesting thing to come out this week. A new president takes office and right before his inauguration, he reads a letter left by his predecessor. Apparently something was found out in space and it is building stuff out in space and the previous president did everything he could to learn about it, regardless of what it did to the American people. The new president … Continue reading →