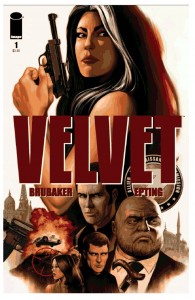 Image’s creator-owned titles have just been knocking it out of the park (ooh, World Series baseball metaphors!) all year, and this one is no exception; it’s by an established team (Brubaker and Epting spent years together on their well-regarded Captain America run), within an established genre (’60s/’70s-style spy thrillers, ala James Bond or Man From U.N.C.L.E.), but with an interesting twist (it focuses on the secretary/love interest of the spy agency, normally a throwaway character, who of course turns out to be much more than she seems). Brubaker is very good at the noir/action stuff (as anyone who reads Fatale knows), and Epting’s confident, realistic style is fun to look at; he’s good at making characters resemble cinematic archetypes (in the way that Paul Gulacy is), and his action scenes have a smooth, shadowy style that’s perfect for the material. Add in a page of editorial material by Brubaker, and a three-page article on the history of spy fiction, and this is an attractive, meaty book; it’s no wonder that it’s already sold out from Image, even with an impressive 57,000 print run, so get your copy while they’re still available. 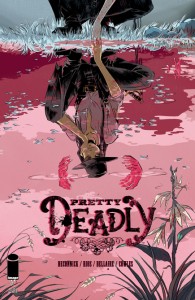 This is another Image book, also sold out of a 57,000 print run, but it’s much different than the smooth, well-done, familiar product that Velvet is, and it’s created some controversy: some reviewers have loved it, while others have, well… not. I liked it quite a bit, myself, and admired its prickly, defiant sensibility: its narrative choices aren’t always immediately accessible, but they’re very well thought out, and it repays close reading. The cover, by interior artist Emma Rios, is a good example: at first glance, it’s just a jumble, but if you look closely, turn it upside down, turn it back, and then open it up so that the back cover completes it, all of a sudden everything falls into place, and it’s a quietly beautiful, evocative image (as is most of her inside art). So too for the story, a Western that approaches its title character with a sideways medicine-show mythology and doesn’t even introduce her on-stage until the last page (breaking most established first-issue rules), but is full of intriguing touches and small grace notes; if I had to compare it to another story, it’s be yet another Image comic, Jonathan Hickman’s East of West. If you’re a reader who wants everything smooth and easy, or dismisses anything different as just “pretentious,” then you won’t like this book — but you’ll be missing an important work by two major emerging talents. 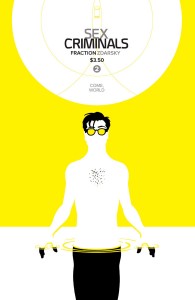 Fraction’s quickly become one of the best writers in the field, and it’s partly because he’s so flexible: like Grant Morrison, he can produce a great run of a corporate title (Iron Man, for example), but then do even better work on his own creations. This week showcases two examples — and, again, Image is the lucky publisher. Sex Criminal is the most obvious labor of love; I raved about the first issue, and this one continues the quality, as we get the backstory for Jon, the boyfriend of the narrator who, like her, can stop time when he has 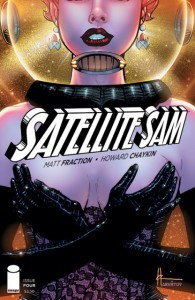 an orgasm. For such an X-rated premise, this book’s heart is pure: it’s funny, sexy, knowing, very human and remarkably sleaze-free (unlike, say, the other Image book about sex, Joe Casey’s Sex, which often comes off as exploitive and depressing). Mix in the assured, attractive art by Zdarsky (who does his own coloring, rendering the “time-stop” scenes in an eerie Day-Glo palette that gives new meaning to the Rolling Stones’ “She Comes In Colors”), and the five-page letters section, and this is a book to develop a meaningful relationship with. Satellite Sam, a murder mystery set in the ’50s-era youth of broadcast television, operates on a much smaller scale, but it’s worthwhile because it provides such a tailor-made platform for Howard Chaykin’s art — his artistic knowledge of the era’s fashions and equipment, his deft touch with faces, and his lush, precise linework make him a joy to read. 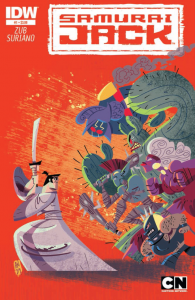 Is it time for late ’90s/early ’00s nostalgia already? The Powerpuff Girls are back in comic form, and now we have Cartoon Network’s wandering samurai; can Dexter’s Laboratory be far behind? This book, the first of a series, covers ground familiar to old fans, as the time-displaced warrior searches for a way to return to his era and defeat the evil wizard Aku, battling spider-demons, robots and assorted other foes along the way. Will he succeed? Unlikely, since if he does there goes the story, but Zub and Suriano are good at recreating the fever-dream images and rhythms of the animated series, and reminding readers what made it such an award winner. 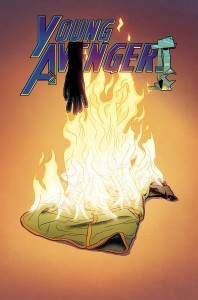 Two by Gillen, yet another dependably-entertaining up-and-coming writer, although both of these are corporate books (ah, Phonogram… when are you coming back?). In Young Avengers, Mother and Leah seem to be partners, have captured Hulkling, and are about to invade the Earth, backed by an army of alternate-dimension evil, not to mention pissed-off exes of many of the Young Avengers. 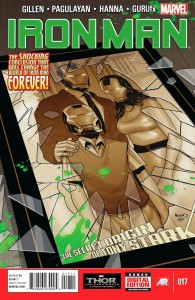 Loki grows up (partly), Prodigy summons his own ragtag kids’ army, and everyone prepares for the big battle. As always, this has attractive visuals from McKelvie, great team characterization from Gillen, and a nice mix of humor, drama and building suspense. Iron Man doesn’t quite reach those heights, but it’s been a fun ride, and this issue pays off handsomely, as Tony, back from outer space, finds out something that will “change the world of Iron Man forever,” says the cover. It will, too, and it builds logically from what Gillen’s been doing on the book for the last year, with an effective twist and then a late reveal that should intrigue old fans. 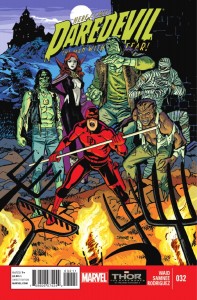 And… two books by yet another author, Mark Waid, who’s not a new face but a long-time veteran, and one known for his ability to find the best, most fan-friendly elements in older characters and make them attractive to fans again — like he’s been doing since the first issue of this volume of Daredevil. Marvel announced this week that DD is being cancelled, with issue #36. Since it’s both a critical and financial success, that’s clearly a feint; what might be

ending is the Waid era on the tile, with 36 issues equalling a three-year run, and a good time for a new Marvel Now! first issue to restart the franchise. Since Waid and (usually) Samnee have made this such a smart, fun series, though (this issue continues the Jester/Sons of the Serpent plot, but then goes into a detour to give Samnee a chance to draw many of the Marvel monster characters for Hallowe’en, a nice example of Waid’s canny plotting), here’s hoping they’ll both stick around, find ways to keep the character as fresh as he’s been, and attract an even wider audience. The Rocketeer/Spirit book is just a mini-series, but it’s another smart idea — the characters are roughly contemporaries, if you squint a bit, so teaming them up makes sense — and a good showcase for Waid’s knack for getting to the core qualities of even a large, disparate cast like this, and combine them smoothly and logically. 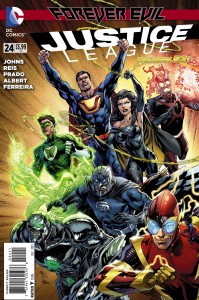 This doesn’t really have any of its title characters in it at all — it’s another chapter in Johns’s company-wide “Forever Evil” plot, as the JLA are nowhere to be found, and instead we get the origin story of Ultraman, the twisted Earth-3 version of Superman, and watch as he terrorizes the regular-Earth Daily Planet until he’s stopped by…well, a character dear to Johns’s heart, and one that he set up in one of the 3-D villain books a few weeks ago. It’s a readable episode of the ongoing drama, with Reis providing art that’s workmanlike in delineating the civilian characters and suitably dramatic in the superhero scenes, and, given all the competition from Image and Marvel, it was the only DC book with enough at stake for me to buy it this week.

This is the last issue of this book; next month continues the Galactus-threatens-the-Ultimate-universe story with a mini-series called Cataclysm, and whether everyone dies, gets rebooted in yet another Ultimate Spider-Man book, gets transferred to the “real” Marvel Universe or meets some other fate isn’t being revealed. If it’s really over, too bad; Bendis, with Mark Bagley, started USM right at the turn of the century, and made something that on paper didn’t look very promising (another attempt to rewrite and capture the magic of the Lee/Ditko early Spider-Man years? Please…) into a surprise hit and a great read, one that flourished as the rest of the Ultimate books sputtered and flamed out. The replacement of Peter Parker with Miles Morales energized the series even more, and this has continued to be both a funny and dramatic look at a kid’s struggle to overcome tragedy, and figure out how to be both a grown-up and a hero; here’s hoping the characters get either another renewed life, or at least the happy ending they deserve. 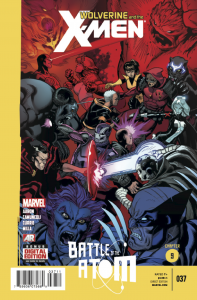 The penultimate chapter of “Battle of the Atom,” and there’s not much more to say about it except that there’s an awful lot of X-Men, both past, present and future (and often in multiple versions), running around, and Aaron does a decent job of not letting them trip over one another. If you haven’t been reading this crossover, you won’t buy this, and if you have been, you will, so you really don’t need to know much more from me. 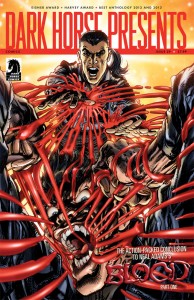 As always, the attraction of this anthology is in its individual parts, so here are the credits: The Neal Adams conclusion to his Blood serial clocks in at 13 pages, with everyone else getting eight — there’s a Michael Gilbert Mr. Monster story, a David Lapham Strain chapter, a Baron/Rude Nexus installment, a Richard Corben Poe adaptation, a Kiernan/Lieber Alabaster, and four other stories too. That’s an impressive and wide-ranging buffet for $8.00, and a decent collection of contemporary comics storytelling.

With 40 years of experience in comic reading, collecting and reviewing, English Professor Phil Mateer has an encyclopedic mind for comics. Feel free to ask Phil about storylines, characters, artists or for that matter, any comic book trivia. He will post your questions and answers on the AABC blog. His knowledge is unparalleled! He is also our warehouse manager, so if you are looking for that hard to find comic book, ask Phil!
View all posts by Phil →
This entry was posted in New Comics, Reviews and tagged Daredevil, Iron Man, Justice League, Pretty Deadly, Rocketeer, Samurai Jack, Satellite Sam, Sex Criminals, Spirit, Ultimate Spider-man, Velvet, Wolverine, X-men, Young Avengers. Bookmark the permalink.