After all those weeks of DC 3-D books, let’s take a break from the Marvel and DC heroes, and look at all the cool comics published by other companies this week instead: 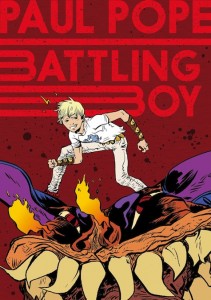 Pope’s art is like a fusion of Jack Kirby and Robert Crumb; he’s got all their crackling energy and sure lines, and straddles the divide between mainstream superheroics and underground anarchy just perfectly. He’ll work for a major company, but on his own terms (see the remarkable Batman: Year 100), but he’s always been happiest charting his own course, and right now he’s at the peak of his abilities. That’s what makes Battling Boy such a welcome event: it’s high-action punch-ups in a city beseiged by monsters, with a 12-year-old demigod and the daughter of the city’s fallen hero squaring off against the bad guys — and, it’s a continuing series. For $15.99, you get over 200 pages of art: compare that to the big companies’ $3.99 for 20 pages, and then go buy this book. 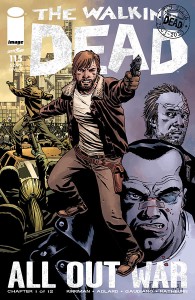 Three horror books this week, with Hallowe’en looming; Walking Dead kicks off the year-long “All Out War,” as Rick and his allies go up against Big Bad Guy Nagan; oddly, it’s the least horrific book here, since there’s little action (that was over the last few issues), no zombies at all 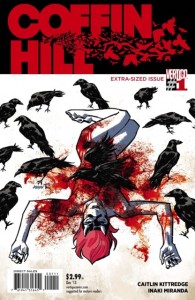 (except for a cameo on the last page) and mostly philosophizing, rallying of the troops, and set-up for the probable carnage to follow. As the first chapter in the book’s tenth-anniversary celebration, though, it’s definitely worth a look. Coffin Hill is a new Vertigo title (OK, that’s a DC imprint, but it’s indy enough to count here) about Eve Coffin, a young ex-policewoman who’s the descendent of a rich New England family with a shady occult past; her own past has some tragic occult experimenting in it too, and the book’s about her coming home to deal with her demons, both psychological and literal. Kittredge, who’s a fantasy/horror novelist, does a good job of setting things up (although there’s more time-jumping in the narrative than 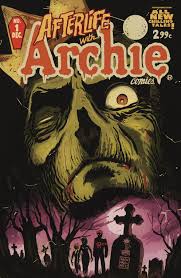 necessary), and Miranda makes everyone look attractive, is good at communicating action, and nails the one or two horror scenes; this looks like it might be good. The star of the week, though, is Afterlife With Archie, a comic where zombies come to Riverdale. That sounds stupid, but turns out to be surprisingly effective: Acosta gets the characters’ combination of innocence and high-school worldliness just right, and comes up with a clever plot involving Jughead’s dog being run over by a car, Sabrina, and the Necronomicon (seriously: none of these people have ever read Pet Sematary? Or “The Monkey’s Paw”?), and Francavilla just nails the art, making everyone more realistic than “normal,” but still recognizable. Of all the books, this one has the most true horror, and the best sense of creeping dread; the last page is just perfect. 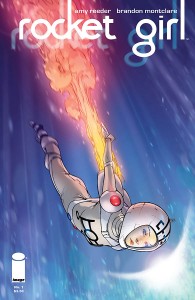 After all that horror, this is a great palate cleanser: the title character is a teenage cop from the future who shows up in New York City in 1986 to prevent a time machine from being invented; she’s tough, cute, ultra-competent and has a rocket pack, a combination tailor-made for Reeder’s appealing, energetic art. This is good old-fashioned all-ages comic book storytelling, and deserves to be a hit. 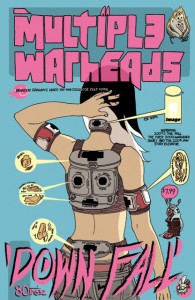 For fans of Graham’s King City, or last year’s Multiple Warheads: Alphabet to Infinity mini-series: this 84-page comic (for $7.99) reprints the earlier appearances of Sexica, an organ smuggler in a post-apocalyptic future,  and Nicoli, her werewolf/mechanic boyfriend, in three stories from 2003, 2004 and 2007 (with some extra new stuff added too). Even Graham’s earliest work has his assured Heavy Metal-ish line, his penchant for puns, and his sf obsessions intact, and it’s unlikely most fans of his current books have seen these (the 2003 10-pager is from the adult comic Sizzle, and is a most-definitely-NSFW tale about how Nicoli became a werewolf); for any over-18 comics reader, this is a fun look at one of the field’s most unique talents. 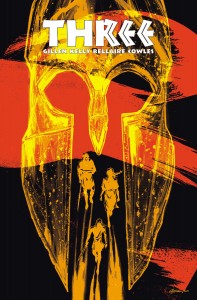 Gillen loves to do historical research, and this book is about the ancient Greeks — specifically the Spartans — about 100 years after Thermopylae.  It’s been billed as a rebuttal to Frank Miller’s 300; Gillen takes pains in the afterword to point out how much he likes that book, but also notes that it engaged in a lot of historical cherry-picking; its unblemished, freedom-defending superheroes hunted slaves themselves, and based their society on them.  That’s definitely a subtext here (one character says “I know stories. I know history. I know where one starts and another begins”), but there’s more going on than that; Gillen wants to make a point about freedom and slavery, and how they can only coexist in a savage power relationship that debases the masters more than the slaves. Kelly (remember Local ?) gets the historical details right while still being natural about it, and is able to communicate volumes with just an expression or two, so he’s a good choice; this isn’t exactly a fun comic — in fact, it’s pretty grim — but it’s a valuable and thought-provoking one. 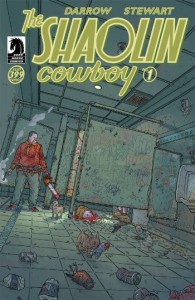 It’s been six years since an issue of this book came out — Darrow worked on the Speed Racer movie with the Wachowskis, and then ended up with them in Japan, working on an animated Shaolin Cowboy movie for a few years after that, although it never got finished.  Now he’s back, though, and fans of his obsessively-detailed art and high-octane, over-the-top action scenes can dig in. If you’re new, ignore the two-page plot summary at the beginning: the Wachowskis write that, and it’s 98% made-up; they make it sound like Darrow has a complicated, world-building plot overarching everything, when really he’s just drawing whatever cool stuff occurs to him. On the other hand, the cool stuff involves a Shaolin monk wandering the American West and fighting a horde of zombies (and when Darrow draws them, it’s really a horde: there’s over a hundred of the things), armed with two chainsaws tied to the ends of a long staff. How could you go possibly go wrong with a comic like that? 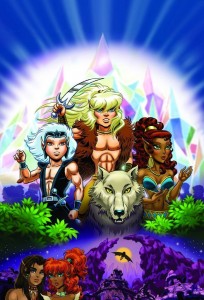 Elfquest, along with Cerebus, was one of the first comics to break out of the Marvel/DC stranglehold in the late ’70s, and leverage the then-new comics stores to find fans on its own. It’s still got a fan base, 35 years later, and it’s good to see the Pinis bringing their world to a (possible) close. There are a lot of characters and backstory to be covered for new fans, but the 60 pages here serve the creators well, letting them show all the relationships and fill in the blanks without seeming to be overcrowded, and Wendy’s art is as graceful and lush as ever.

You know the drill by now — I think this is one of the smoothest, most-accomplished and sophisticated superhero-oriented books on the stands. Busiek seems to be alternating one or two-issue stories with a more complicated overall arc, one that looks like it’ll take a long time to pay off and involves a character called the “Broken Man” who talks directly to the readers; this is one of the meta-story issues, so it might be confusing to first-timers, but if they’re intrigued enough to keep reading they’ll definitely be rewarded.

With 40 years of experience in comic reading, collecting and reviewing, English Professor Phil Mateer has an encyclopedic mind for comics. Feel free to ask Phil about storylines, characters, artists or for that matter, any comic book trivia. He will post your questions and answers on the AABC blog. His knowledge is unparalleled! He is also our warehouse manager, so if you are looking for that hard to find comic book, ask Phil!
View all posts by Phil →
This entry was posted in New Comics, Reviews and tagged Afterlife With Archie, Astro City, Battling Boy, Coffin Hill, Elfquest, Multiple Warheads, Rocket Girl, Shaolin Cowboy, Three, Walking Dead. Bookmark the permalink.