The Latest and (Mostly) Greatest #51 by Dan!

Well folks, I’m back! It’s been another long week, full of wonderful comics, so here’s the best of the best. Let’s do this! 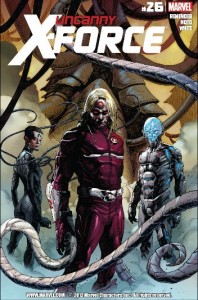 With each issue, X-Force moves closer to the consistent quality of X-Factor as the best X-comic on the stands. There’s nothing here that you won’t like. Remender has a voice for every single one of the characters that works and helps build appropriate relationships based around what is going on. Fantomex and Psylocke have both quit, but of course they can’t actually get away. There’s a new Brotherhood of Evil Mutants that is trying to take things over; there’s several misunderstandings, and there’s a reverse of Wolverine’s healing factor that causes an oddly hilarious fat Wolverine. All that and Deadpool. It’s legitimately good stuff that improves with almost every issue. Noto’s art completes how worthwhile this entire book is.

I was shocked by how much I liked this issue. I was expecting to enjoy the first issue from last week, which I did, but this one kinda blew it out of the water. For all the exposition put forth in Minutemen, Silk Spectre just tells an almost coming-of-age type story about two generations and the differences they face. I’m not kidding. Conner uses the nine-panel grid in an incredibly effective way, and sets the bar in terms of pure art quality for the future series. If the other books can be half as good as this intro issue, we’re looking at incredible possibilities. All that and a sperm joke. A really gross sperm joke. 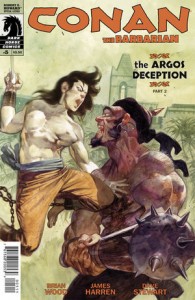 Apparently it’s Brian Wood week here for the reviews, and that’s not a bad thing. Conan has had Becky Cloonan taking a break on art, but Harren has been an able replacement. The book has an incredibly graphic fight scene that went off in directions I can honestly say I wasn’t expecting. Wood has been absolutely killing this Conan book and I look forward to each issue. The Massive is his latest post-apocalypse story where one big thing goes 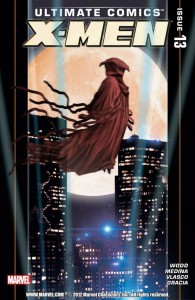 wrong and the whole world has to recuperate from it. This time, things are much more Waterworld style and everyone is surviving and searching for a lost boat. It’s got a ton of infodumping that didn’t quite work for my tired mind while I was reading it, but it’s still good. X-men is Wood’s debut on the issue and it embraces his usual tactic of taking strong female leads and mixing them with revolutions. He’s almost like Ridley Scott with his use of female leads (yeah, I watched Prometheus. Yeah, it’s awesome…) and this issue puts Kitty Pryde center stage. All three books cover the basics of what Wood likes to talk about, and all the art is great to look at. It’s a very good week for Brian Wood, and you’d be foolish to miss out on it. 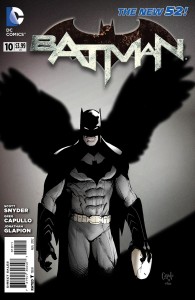 After Snyder bombed out on me with that Batman Annual (yeah, I’m still upset), it was hard to tell how I was going to take his next issues of Batman. And this issue is just OK. There’s a HUGE reveal that kind of comes out of absolutely nowhere and kinda screws up everything. I had thought that guy looked like Bruce Wayne… as has been the case, Capullo absolutely kills it with these issues. His art has been absolutely impeccable with this series, and I will consistently say I’ve been shocked by the quality. This title is definitely one of the best the New 52 has offered up, and I hope that Snyder knows what he’s doing for the future. 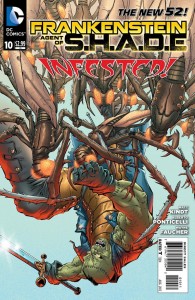 Contrary to the cover claims, this is Matt Kindt’s first issue on the title, and boy does he kick it up a notch. That cover is just the set-up before things get real. It’s like someone told Kindt “Jeff Lemire made it weird, but not enough action” and Kindt said “Got it.” Kindt is quickly becoming one of my favorite writers in the business (if you didn’t read Mind MGMT, we have to stop being friends). He seems to bridge the gap between the hyper-intellectual (Alan Moore, Dave Sim) and the hyper-action (Bendis, Johns) without getting ridiculous. It’s absolutely fantastic stuff, and it has completely reinvigorated the Frankenstein title.

And Now some Quick Hits! 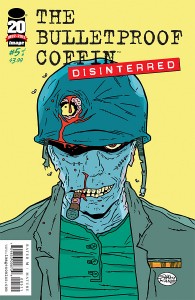 Bulletproof Coffin: Disinterred #5 Writer: David Hine Artist: Shaky Kane: What in the world happened to this comic? It’s so completely insane and I can’t even explain it. Eddie loves it, so that’s all you need to know.

Incredible Hulk #9 Writer: Jason Aaron Artist: Pasqual Ferry: As I said, what a difference art makes. This ‘stay angry’ story has been awesome, and nice to look at, and has made Aaron seem appropriate for this title, finally. 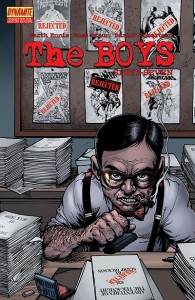 The Boys #67 Writer: Garth Ennis Artist: Russ Braun: Those last few pages give me chills. Things keep wrapping up but you can tell that it’s about to get SUPREMELY F’ed up in no time. So So Good. Go read the trades.

Green Lantern #10 Writer: Geoff Johns Artist: Doug Mahnke: Still good after all this time, and I just love Mahnke’s art. Johns is fleshing out the Indigo tribe, and it just keeps staying the same, consistent quality.

Deathstroke #10 Writer/Artist: Rob Liefeld: Guys, I actually read this. For you. I have no idea what happened in it, no idea who the characters are, and no idea how this can possibly keep surviving cancellation. But I read it. So you don’t have to.

And that’s the week! Until next time folks.