It Came From the Back Room #49 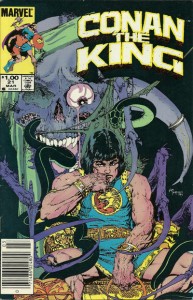 Standard recap: I’m slowly going through AABC’s one-million-plus back-issue room, restocking the boxes on the sales floor and pulling stuff to sell as discount/overstock/special items (these are featured at the discount racks at the west end of the store for a couple of weeks after each post, and then go to the discount racks on the east end of the store for a few weeks, and then disappear into our warehouses, so get them while you can). I’m going through the alphabet backwards (don’t ask), and at my speed, this amounts to a two-and-a-half-year project.  This week, we’re continuing the letter “C,” and picking up where we left off, with Robert E. Howard’s creation: 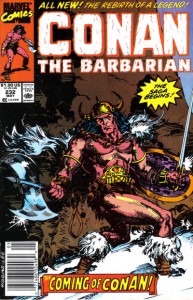 Last time, we got up to issue #220 of the original Marvel run. From there until the final issue, #275, it’s pretty much one standard barbarian tale after another, enlivened by the occasional name artist and a few other wrinkles: Alfredo Alcala pencils and inks in #225, for example, and the way that, starting with issue #232, a new creative team — author Michael Higgins and artist Ron Lim — reset the story, starting with Conan’s earliest years in his native Cimmeria. This “Young Conan” serial lasts nine issues — artist Rodney Ramos takes over from Lim with issue #236, with Gary Hartle penciling the final four after that, and Roy Thomas writes 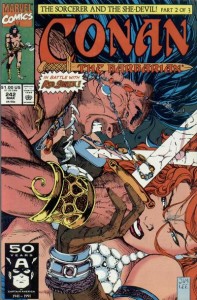 the final chapter in issue #240, follows it with an extended Red Sonya crossover in #s 241-250 and then stays on all the way through the end in issue # 275; it’s good to see Thomas back with the barbarian he helped make so popular, although the artists during this period are unremarkable (E.R. Cruz in #s 261 and 262 is about the only one worth mentioning, while most of the other issues are by Mike Docherty). It’s also worth mentioning that the last issue follows the pattern of other long-running licensed titles like Star Wars, G.I. Joe and Transformers: with print runs relatively low at the end of the run (which, duh, is why it gets cancelled), it’s hard for completist collectors to find, and therefore is worth much more than most of the other later issues: in Conan’s case, around $30 in NM condition. 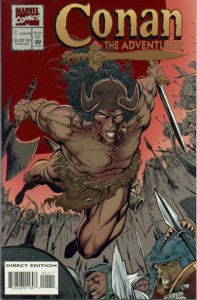 After the final issue, in December 1993, there’s an inevitable relaunch: Conan the Adventurer, which has 14 issues in 1994 and 1995. The first issue has one of those ’90s enhanced foil covers, and a script by Thomas (who writes the whole run, mostly with art by Rafael Kayanan); sales, unfortunately, don’t improve over the previous volume, and cancellation comes quickly. Marvel tries again in late 1995, with a comic titled, simply, Conan, but it only lasts 11 issues; for the rest of the ’90s, Marvel issues a number of Conan mini-series, presumably to retain the licensing rights to the character, but none of them justify an ongoing title, and by the end of the century the burly warrior has disappeared into the mists of history… at least for a while. 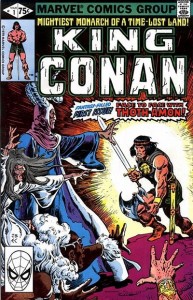 Before chronicling his later adventures, though, we’d be remiss not to mention the Marvel companion title King Conan (also called Conan the King), whhich had a respectable 55-issue run throughout the 1980s. This book told stories of an older Conan, once he’d settled down as ruler of Aquilonia, and, like Prince Valiant, sired a son, Conn, who played the role of inexperienced young adventurer that his father wasn’t suited for any longer. The first eight issues of the series are by Thomas and John Buscema, which gets it off to a good start; Buscema also pencils #9 and #17, with Marc Sylvestri in #s 13-16 and 19-21, 23 and 25-29 (many of the issues between 20 and 30 also sport intricate, eye-catching covers by Michael Kaluta). Otherwise, nothing stands out from the norm, except possibly art by Tony DeZuniga in issue #47. 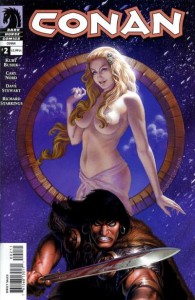 Back to Conan  in our current century: after Marvel lets the license lapse at the end of the ’90s, it gets picked up by Dark Horse Publishing, and in 2003 Conan is revived. Dark Horse is smart enough to give the writing chores to Kurt Busiek, who himself is smart enough to start with the barbarian’s earliest years, and in the process reveals an extensive knowledge of Robert E. Howard’s stories and backgrounds; this new version of the character starts with a “0” issue in November of 2003, quickly becomes a hit, and has been in print ever since.  The first issue has art by Thomas Yeates and Cary Nord; the second, an

adaptation of “The Frost Giant’s Daughter,” has Nord alone, plus a gorgeous semi-nude cover by Joseph Michael Linsner (who contributes covers to the first seven issues) that draws in a number of readers who are impressed enough to stick around for a while. The Busiek/Yeates/Nord team stay on the title mostly through issue # 15, with Nord soloing on the art for most issues after that; many of the highlights are the Howard adaptations, including “The God in the Bowl” in #11 and “The Tower of the Elephant” in #20-22; other artists of note include John Severin, in issue #18,  Michael Kaluta, who contributes six pages to #22, Timothy Truman in issues #26 and 27, and Goon creator Eric Powell in #28. 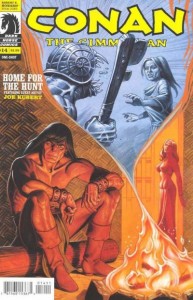 Truman takes over — as writer, not penciller — with #33, still with Nord art (although other artists frequently fill in); an adaptation of “Rogues in the House” in issues #41-44 is probably the high point here. Conan ends with issue #50, in May 2008, but that’s followed by the new ongoing Conan the Cimmerian in June of 2008, which is still written by Truman and lasts for 25 issues, through late 2010. Highlights of that run include Richard Corben art in issues #1-7, and Joe Kubert in #14.

Dark Horse also has published a number of mini and maxi- 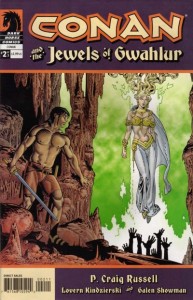 series; the ones most worth seeking out are The Book of Thoth, with Busiek writing and Kelley Jones art, and Conan and the Jewels of Gwahlur, with P. Craig Russell supplying script, pencils and inks. The most recent series, the ongoing Conan the Barbarian, started just this year, and is adapting the Conan/Belit saga, with script by Brian Wood and eye-catching art by Becky Cloonan in the first three issues.

All of the discount Conan titles are at the east end of the store, both in the main center rack and the one next to the variant-cover books; in the west-side rack, I put out 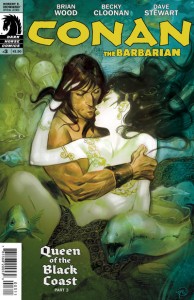 Catwoman back issues today, about 2/3 of them from DC’s first run of the title (many with Jim Balent art), and the rest from the Ed Brubaker-scripted volume from a few years back (no, we don’t have the first few of those — the ones with Darwyn Cook art — out for discount, although they’re in the regular back-issue boxes).  DC just released a new reprint trade version of those, though, just in time for the Batman movie next month, and they — and, in fact, the whole Brubaker run — are worth a look if you’ve never read them; they’re smart and sexy without being sexist, and do a good job of making Selina into a strong, easy-to-root for main character.

With 40 years of experience in comic reading, collecting and reviewing, English Professor Phil Mateer has an encyclopedic mind for comics. Feel free to ask Phil about storylines, characters, artists or for that matter, any comic book trivia. He will post your questions and answers on the AABC blog. His knowledge is unparalleled! He is also our warehouse manager, so if you are looking for that hard to find comic book, ask Phil!
View all posts by Phil →
This entry was posted in Comics History, News & Promos, Reviews and tagged Conan, John Buscema, Kurt Busiek, Richard Corben, Roy Thomas, Tim Truman. Bookmark the permalink.