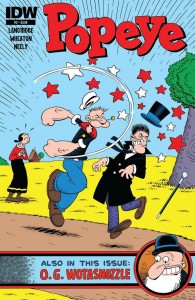 I raved about the first issue of this, and the second is just as good, although on a smaller scale — instead of an ocean quest and the Sea Hag, we get one of those neighborhood domestic comedies that Segar was so good at, with Popeye dealing with a rival for Olive’s affections (in one of the Easter eggs Langridge has sprinkled throughout the book, it turns out to be Willie Wormwood, the “actor” who played the Snidely Whiplash-like bad guys in Segar’s early, pre-Popeye versions of Thimble Theater; a similar insider joke involves some museum fine-art paintings that turn out to be portraits of early comic-strip heroes like Jiggs, Barney Google, and Mr. Gump). Wheton’s art captures Segar’s spirit and sense of comic timing impeccably; the back-up story, involving the big-nosed inventor O. G. Wottasnozzle, has Langridge and artist Tom Neely doing the same. This is a “funny book” in the classic sense of the word, and one that will make you happy. 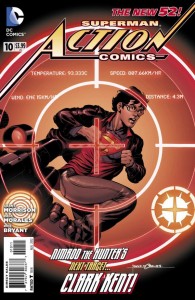 There haven’t been any typical Morrison pyrotechnics with this book for a few issues, but it’s settled down into a smooth, entertaining look at Superman’s early days. The main plot involves a big-game hunter tracking the connection between Superman and Clark Kent, and events coalescing to solve that problem, but create a larger one (the ghost of Mort Weisinger hovers over the  twist here, although he’d have had his writer cover the whole thing in a ten-page story, instead of stringing it out over a few episodes). There’s also a scene with the recently-formed JLA, establishing Superman’s idealism and Batman’s suspicions about it (and him), and a few other subplots too; it’s all very assured, and Morales’s art handles it all nicely — even without any “wow” moments, this offers a good example of how to deliver an effective

chapter in an ongoing superhero serial.

Three by Fraction — Iron Man is the one he’s been writing the longest, and seems the most personal labor of love; it 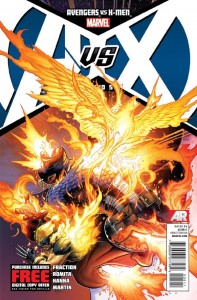 continues Stark’s real-world chess match with the Mandarin, Bethany Cabe’s battle with the Spymaster, and Ezekiel Stane’s bid for independence; they’re all fascinating people doing interesting things, a good recipe for getting readers to return for more episodes.  AvX sees the Phoenix Force arriving on the moon, with unexpected results for the battling cast; it’s more tied up in plot-by-committee than the other two books (although Fraction, having helmed Uncanny X-Men for a while, has at least those characters’ voices down), but has the John Romita Jr. advantage of the best art of the three. It’s followed closely by Defenders, though, since the Dodson 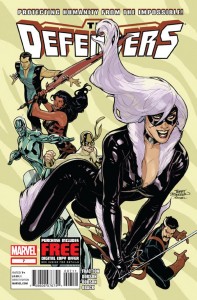 family offers very pretty pencils and inks, especially on guest star the Black Cat, who gets a lot of solo action. Of the trio of books, this is the strangest, with its reality-bending Concordance Engines, history-spanning conspiracies, Wakandan herbal drug trips (which, to the Silver Surfer, prove literally mind-expanding), and even the small touches, like the continuing ’70s-era promo blurbs at the bottoms of the pages. Of the three, this is the comic you’re least likely to be reading right now, but the one most worth a try. 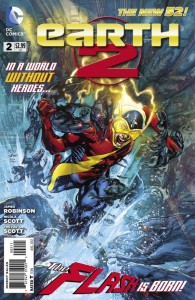 Earth 2‘s gotten all the attention this week, with its “gay Green Lantern” (a concept hard to explain to non-comic acquaintances: “No, it isn’t Hal Jordan, it’s another guy, Alan Scott. No, it doesn’t involve blue-headed Guardians; see, he gets a magic lantern, and his ring doesn’t work against wood, and he used to be older but now he’s younger, and… oh, forget it; read this X-Men comic with a gay marriage in it instead.” For all the hype, there’s no actual Green Lantern in this issue — just the train wreck that, one assumes, will precipitate it. There is a new Flash, 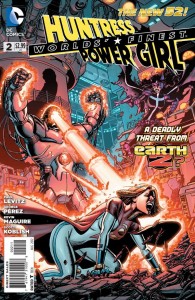 and the Earth 1 Mr. Terrific, and a number of other developments, but writer Robinson is taking his time about setting things up here, so readers picking this up only for the social-news angle might be disappointed. Those merely wanting a decent comic story, however, and who have the patience to watch it spread out over a couple of issues, should be happy enough.

The other book, Worlds’ Finest, continues its old-school charms (Levitz and Perez are about as old-school as still-working creators get any more, and Maguire isn’t that far behind them) in chronicling the adventures of the former Supergirl and Batgirl of Earth 2, now stranded on Earth 1 and acting as the New-52 versions of Power Girl and the Huntress.  Let’s not even get started on the background behind that, but Levitz was around for the original creations of those characters back in the ’70s, and he offers a skillful updating of them here. 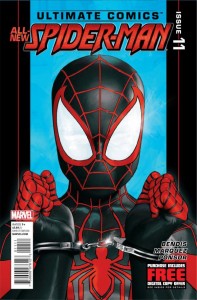 I’d been wondering when this new version of Spidey would get his Uncle Ben moment, and it looks like it’s coming up next issue; just which character will have to die to demonstrate the power/responsibility meme isn’t as clear yet, though, since there are at least three good candidates. Marquez’s art is slowly growing on me (it’s not his fault that he isn’t Chris Samnee, or Sara Pichelli), and Bendis’s take on the character is effective enough, even though it can get strange to watch him reimagining and updating concepts that he was originally rebooting a dozen years ago. As with explaining the “new” Earth 2 Green Lantern, this is why long-term comics fans need to develop a head for multiple-track concepts, and both a good memory for and a casual attitude toward continuity…. 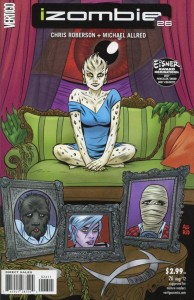 Rocketing towards what seems to be, literally, an earth-shattering conclusion; for a book that seemed at first to be a mild-mannered, diner-set retro version of ’60s monster flicks, it’s sure ramped up over the last few years. The selling point remains, as always, the cool Allred art, and Roberson’s ability to play to its strengths, whether it’s a character who’s a monkey and an uncle (instead of a monkey’s uncle), a go-go dancer ghost, the Lovecraftian bad guy, or the title character/narrator herself.

Stuff I bought, but don’t have anything new to say 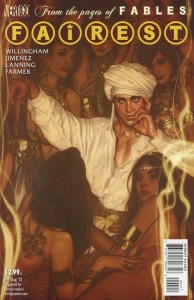 about, so check revious reviews in the archives if you’re interested: 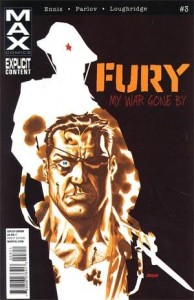 With 40 years of experience in comic reading, collecting and reviewing, English Professor Phil Mateer has an encyclopedic mind for comics. Feel free to ask Phil about storylines, characters, artists or for that matter, any comic book trivia. He will post your questions and answers on the AABC blog. His knowledge is unparalleled! He is also our warehouse manager, so if you are looking for that hard to find comic book, ask Phil!
View all posts by Phil →
This entry was posted in New Comics, Reviews and tagged Avengers, Defenders, Earth 2, grant Morrison, Green Lantern, Iron Man, iZombie, Popeye, Roger Langridge, Superman, Ultimate Spider-man, X-men. Bookmark the permalink.