The Latest and (Mostly) Greatest #50 by Dan!

Did I actually take last week off? Yes, but it wasn’t much of a break while working the Phoenix Comics Con…but we’ve survived! So it’s on to reviews. Let’s do this! 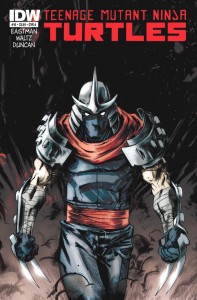 Good news everyone! This series, which basically rebooted itself around the same time as the New DC 52, has stayed consistently strong and fantastic for its almost full-year run of comics! I’ve been reading the Mirage Studios version of these comics and it’s essentially rehashing the same steps that these comics hit, but bringing them to a new audience and modifying them in practical ways. This story pitches the parallel stories of Shredder and Splinter re-meeting in this incarnation, while the Turtles and April try to figure out what to do. It’s well put together, well-drawn and overall, one of the most fun and consistent comics on the stands today. 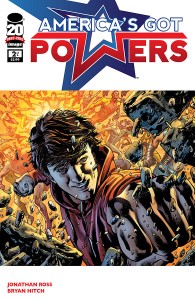 I didn’t want to like this, but these first two issues have been above and beyond my expectations. Ross, who basically has only written Turf (in the comics world), is crafting a universe where everything is perfectly put together and makes logical sense. Characters have proper motivations, and stand out individually. Hitch is working his usual cinematic storytelling art style that makes you feel like you’re reading a movie. Guys, it’s basically Hunger- Games- meets- running- man without nearly as much angst as you think that would cover. I mean that as a positive comment! 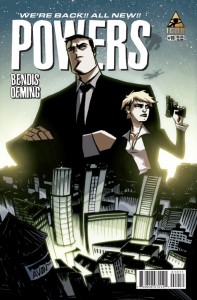 I think I’m done reading Bendis comics that aren’t Powers. For some reason, he stays focused in this series to a point that he doesn’t with others. It’s always a slow burn, and sometimes I don’t remember what’s going on, but it’s absolutely the best Bendis has to offer. Oeming is Oeming and it’s so stylized that you have to make your own decision how you feel about it. Bendis’ back matter wears me out (basically the opposite of Brubaker in his books), but the story itself is so solid, and has been for the 60 or so issues he’s done of Powers. I love this book, and would have killed to see it as a TV show, even if it was terrible. 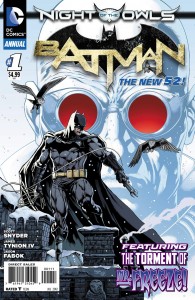 Start with the good. Fabok’s art is much better than I expected. He toned down the David Finch excess he sometimes has and it looks good. Now the bad. This book basically $#*! all over my childhood. They re-introduce Mr. Freeze and tweak his origin to essentially make him a meaningless crazy person. Freeze is built around the idea of trying to save his wife, it gives him heart, motivation and an actual cause that bad guys don’t normally have. By taking that away, you’ve essentially ruined everything. This is the first issue of anything Snyder has written about Batman that gave me this angry nerd-rage reaction. It’s by far the worst idea the Bat-books have done in a while, and I’m including All-Star Batman and Robin. Seriously, a kid’s TV won an Emmy doing the origin of Freeze and doing it well. There’s no reason to change that. There’s no reason to ruin everything about one of the best villain origins in comics. Fail. Epic $4.99 price cover fail. 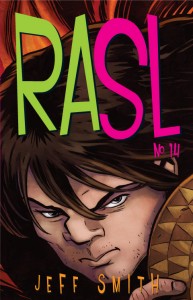 Sorry guys, I blacked out there for a second, but I’m back now and with happier reviews. RASL still rocks. There’s nothing wrong with this comic (aside from slow shipping) and as it comes to an end, we’re basically going to have one of the best 15-issue runs of comics ever made. Guys, I’m not even really sure what’s left to say about this comic. It’s used time travel, Tesla coils and the Arizona desert to tell one of the most interesting stories to be found in comics in decades. It’s insane to me that the guy who did the kids book Bone could transition this easily into a more adult story, but here it is. It’s fantastic stuff, and if you can track down the issues or buy the oversized TPB’s, please do. It’s fantastic. 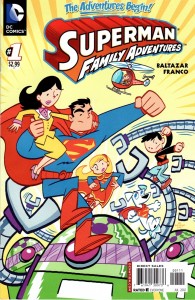 Superman Family Adventures #1 writers/artists: Art Baltazar and Franco: The Tiny Titans guys make a come back with this new Supe book, and it’s better than the New 52. That’s my review.

Incredible Hulk #8 Writer: Jason Aaron Artist: Steve Dillon: What a difference an artist makes. The story works, the art works and everything is infinitely better than Silvestri.

Rachel Rising #8 Writer/Artist: Terry Moore: Worth noting because Moore has just been cranking out the creator-owned comics like it’s going out of style. His stories work better in trade, but all are still great.

The Ravagers #1 Writer: Howard Mackie Artist: Ian Churchill: Worth noting as the last of the new books of the New 52. It’s OK… ties into Teen Titans and other books, and it’s just “meh.”

And that’s the week! As always, I’ll be back in two weeks!