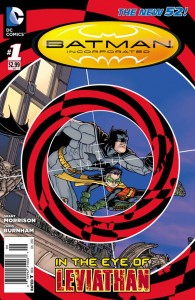 After almost a year, it’s nice to have this back, and Morrison offers many of his old tricks: the first-page flash-forward, showing Bruce Wayne in a bad place; the vast conspiracies; the perspective switch to humanize one of the faceless minions; the shock ending; Batman and Damian and Talia and all the moves and counter-moves between Wayne’s forces and Leviathan’s: then, add the art, which is quite good at communicating the action, and looks Quitely-like in some of the expressions and poses (Morrison’s scripts have similar effects on his artists). The “New 52” Batbooks may be very popular right now, but this is smarter than all of them put together, and the best book of the week. However…

… Kindt’s been making a splash in monthly comics lately — his 3 Story one-shot, and guest pencils on Sweet Tooth, introduced his work to a lot of fans who weren’t familiar with it, and this new ongoing series demands attention: it’s like nothing else out there right now. The art looks deceptively simple, all sketchy and with a watercolor wash (and with the blue lines of the original pages kept in), but look closer: it’s very accomplished, every line just so, and the story itself, about an espionage agency that deals with weird, Fringe-like mysteries, is complicated, fun and eerie. Kindt says in the letters page that there are lots of codes, puzzles and clues hidden in each issue — the back covers of the first six books form a puzzle that gives readers a code number that unlocks exclusive online content — and that obsessive, cultish attention to detail is a hallmark of his work, making this a tie with Batman: Incorporated for best book of the week.

This book made a big splash with its issue #21 revival, and has kept getting better: I was afraid at first that its surreal weirdness was only for effect, with no underlying structure (yeah, David Lynch, I’m looking at you), but this fifth issue, which ends the first arc, makes it clear that Graham’s had a clever plan all along. Milonogiannis, here for the first time, fits in very smoothly; his art matches the escalating violence and strangeness perfectly. Anyone who complains about the sameness of modern comics needs to pick up this and Mind Mgmt; ideosynchratic, complicated creations like these deserve the widest audience they can get. 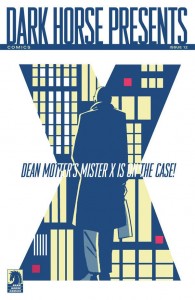 Some have criticized this anthology for its ’80s/’90s revival sensibility, and the new serials starting this week — Nexus, by Mike Baron and Phoenix’s own Steve Rude;  Mister X, by Dean Motter (channeling Will Eisner’s Spirit); and an Aliens story with art by Sam Kieth — don’t exactly refute the claim: but so what? This is good work by accomplished creators, and when you add in an Evan Dorkin Eltingville Fan Club tale (complete with a zombie crawl), Carla Speed McNeil’s Finder, a Harlan Ellison adaptaion by Richard Corben, and five other stories, the $7.99 price continues to be the best bargain in comics.

Speaking of Corben… Strnad’s story about a sentient, crumbling mansion is stereotypically Lovecraftian, all insect-like skittering about and tentacles and semi-human baboon-like creatures and lurking cosmic madness, and it’s so over-the-top that it’s sometimes silly when it means to be creepy, but 24 pages of Corben drawing all of that stuff for $3.50? Sold! 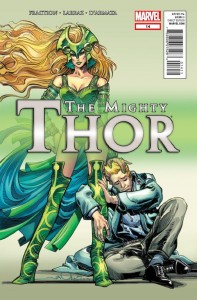 In which Don Blake eats an apple and loses his head, while Thor confronts his worst nightmare… I like the way Larraz draws Hreidmar, the bookish little dwarf, and the nightmare-generating creatures; I also like the nod to the climax from Ghostbusters. As long as Fraction keeps up the sly pop-culture references and the surprising twists, I’ll keep reading this book. 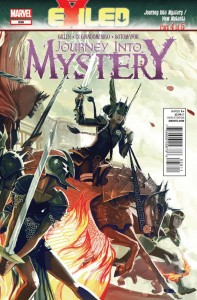 Part four of a five-issue crossover with New Mutants; with these three writers, all clever plotters, there’s almost too much Asgardian plot flying around, but it’s worth it for the smart dialogue and, as always, the sympathetic/comic characterization of Loki.

A “Night of the Owls” crossover, still set in the late-nineteenth-century Gotham City and, thanks to the creative team, nowhere near as stupid as it sounds. Plus: a welcome appearance by Tallulah Black, Hex’s distaff counterpart, who’s a match for him in cynicism and toughness, and enlivens the book any time she’s around. 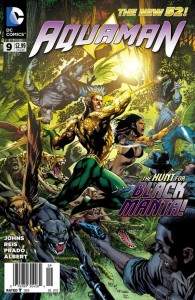 More on Arthur’s early years with a heretofore-unrevealed super-team, and a shocking last-page plot-twist reveal that’s typically Johns, in that it changes what we know about the characters, will be controversial, and yet still fits smoothly into previous continuity. This book never quite thrills me, but it’s always interesting, and the fact that I’m still buying an Aquaman comic after nine issues is an accomplishment by itself.

Stuff I bought, but don’t have anything new to say about, so look up previous reviews in the archives if you’re interested: 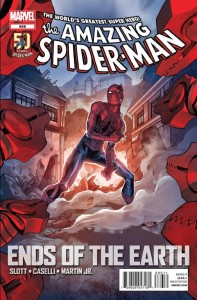 With 40 years of experience in comic reading, collecting and reviewing, English Professor Phil Mateer has an encyclopedic mind for comics. Feel free to ask Phil about storylines, characters, artists or for that matter, any comic book trivia. He will post your questions and answers on the AABC blog. His knowledge is unparalleled! He is also our warehouse manager, so if you are looking for that hard to find comic book, ask Phil!
View all posts by Phil →
This entry was posted in New Comics, Reviews and tagged Aquaman, Batman Incorporated, Dark Horse Presents, Jonah Hex, Journey into Mystery, Mind Mgmt, Prophet, Ragemoor, Thor. Bookmark the permalink.